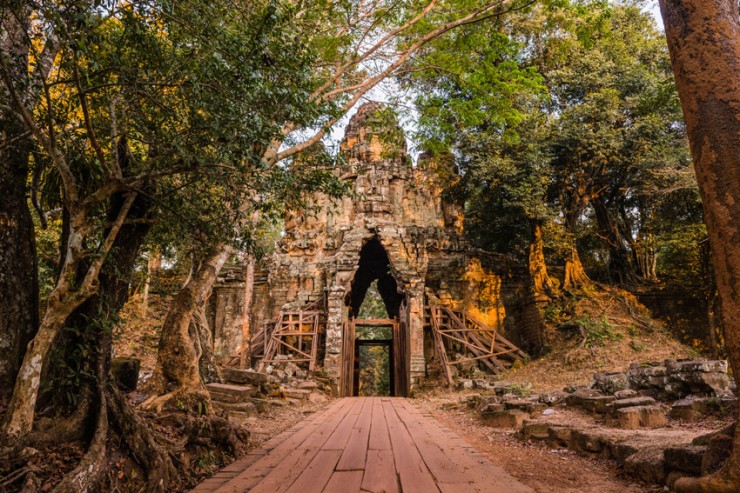 Angkor Thom was once the most enduring capital city of 12th century Khmer empire. It was the world’s largest city during that time and was established by the famous and great King Jayavarman VII. When Jayavarman VII came to power; he took over the reigns of the Khmer Empire at a difficult moment after the invasion of a Cham fleet which had destroyed the capital from end to end (1177-1181) and had taken away the greater part of the country’s properties. He displaced the center of the city and reduced the surface, thus making the perimeter less costly. Angkor Thom covers an area of 9 km², within which are located several monuments from earlier eras as well as those established by Jayavarman and his successors.

The Gates of Angkor Thom

King Jayavarman VII ordered the capital city to be have walls built around the area at 8m high , 3km at each side and moats that are 100m wide. The walls are of laterite buttressed by earth, with a parapet on the top. There are gates at each of the cardinal points, from which roads lead to the Bayon at the centre of the city. As the Bayon itself has no wall or moat of its own, those of the city are interpreted by archaeologists as representing the mountains and oceans surrounding the Bayon’s Mount Meru. 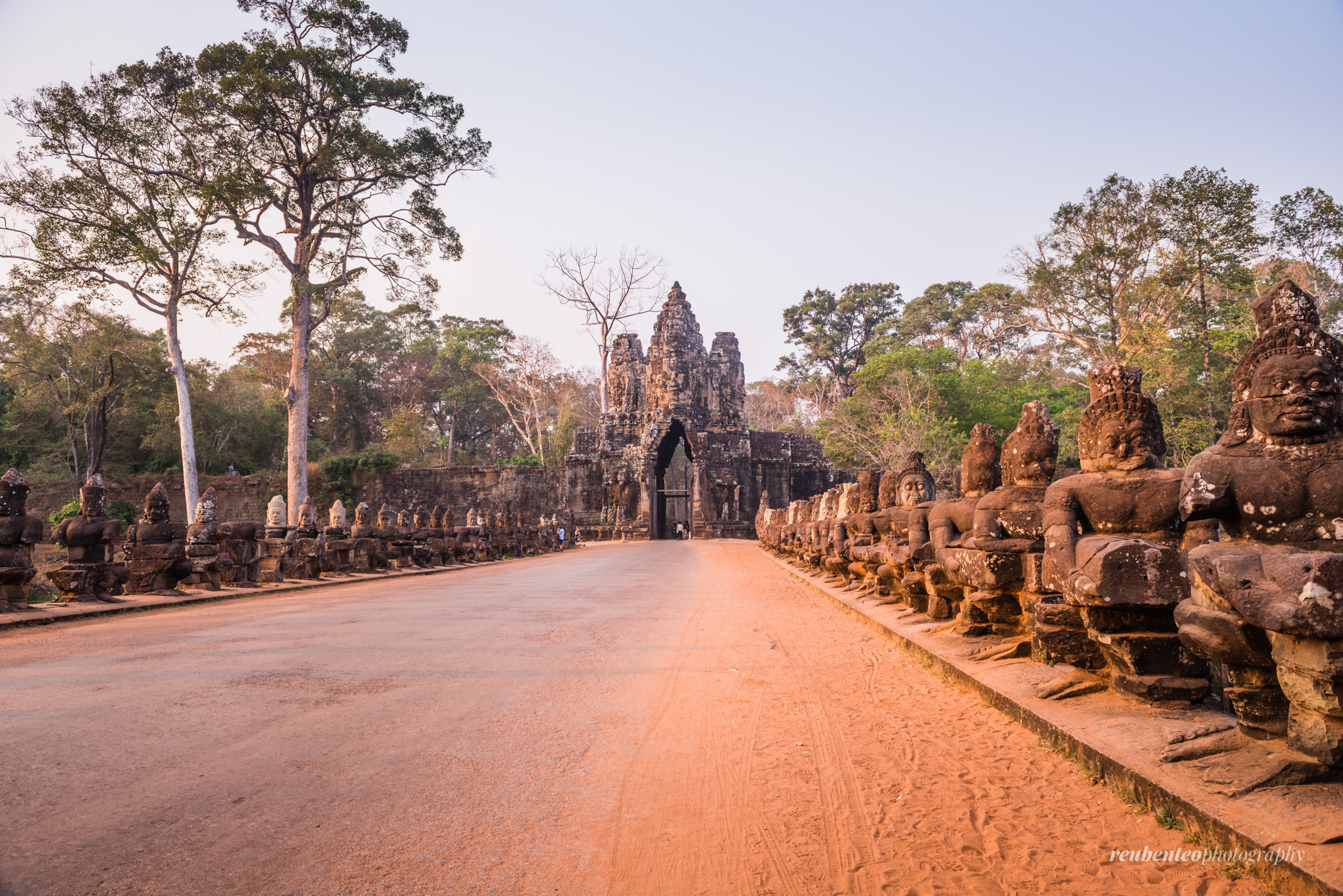 All 5 gates and causeways are of the same construction and identical. The central tower, more than 23 m high, is flanked by two smaller towers. Huge faces are looking to the cardinal points. In the corners of the towers’ bases, god Indra appears with two spouses, mounted on the three-headed elephant Airavan, whose trunks are pulling lotus flowers. In front of the gate, Naga Kings are guarding the causeway, escorting human beings from the secular world to the sacred area of the temple. The Naga are held by giants. Looking outside you see 54 gods to the right and demons in equal number to the left.

The South Gate is the most well known of the 5. It is the main entrance and gateway for tourists into the great Angkor Thom. During peak seasons, this gate can be extremely crowded and don’t be surprised if you see a small traffic jam of tuk-tuks here. It provides the most common access route to Angkor Thom, predominantly because it sits on the path between the two great Angkor complexes. The gate is a wonderful introduction to Angkor Thom, with well-restored statues of asuras (demons) and gods lining the bridge. The figures on the left, exhibiting serene expression, are the gods, while those on the right, with grimaced, fierce-looking heads, are the asuras.

Alternatively, there lies the mysterious East Gate that is left in ruins. The East Gate once served a different purpose and is also known as the Death Gate. Legend has it that it was through East Gate that convicts were sent to be executed. The gate’s highlights include statues of gods and nagas on the approach to the gate, and carved faces on top of the gate, reminiscent of those at Bayon. An abandoned road runs from the Bayon to the east. After 1.5 km of forest the East Gate appears. Restored with care, it is the only gate of Angkor Thom to keep untouched, like eight hundred years ago. Rarely a visitor will come here: You can enjoy a summit of human art, a wonder of the world—in solitude. 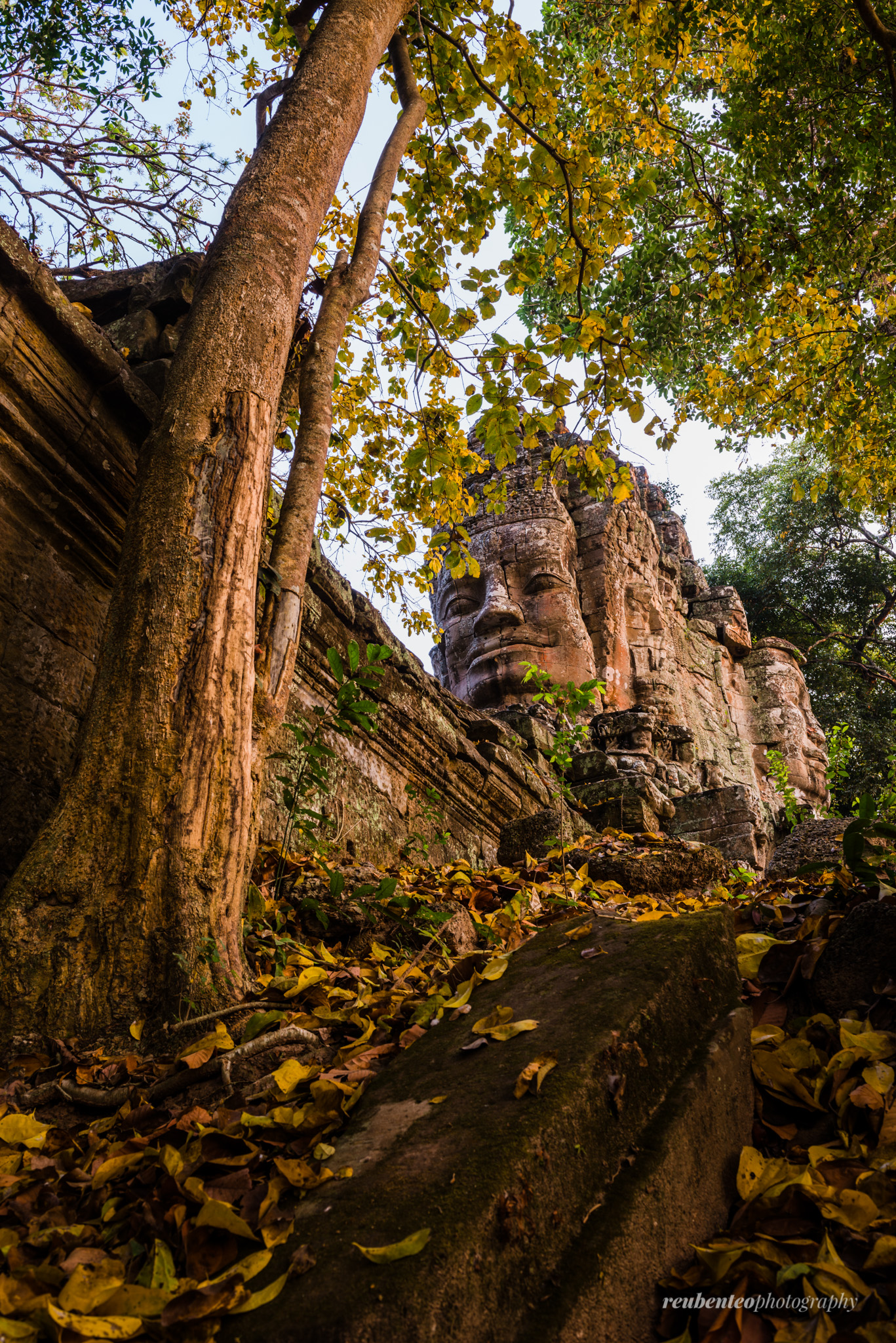 One of the faces of the West Gate 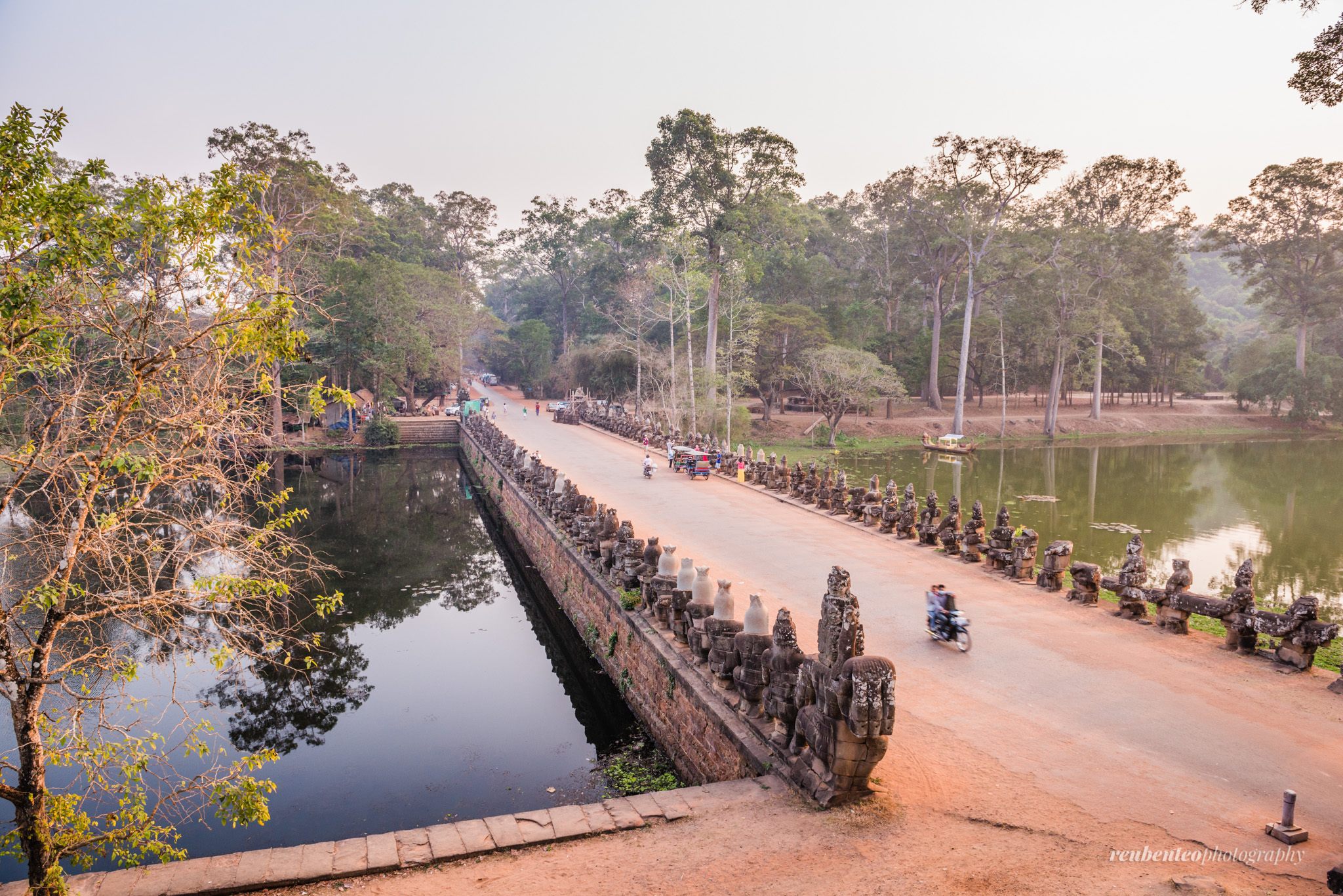 The moats at the South Gate 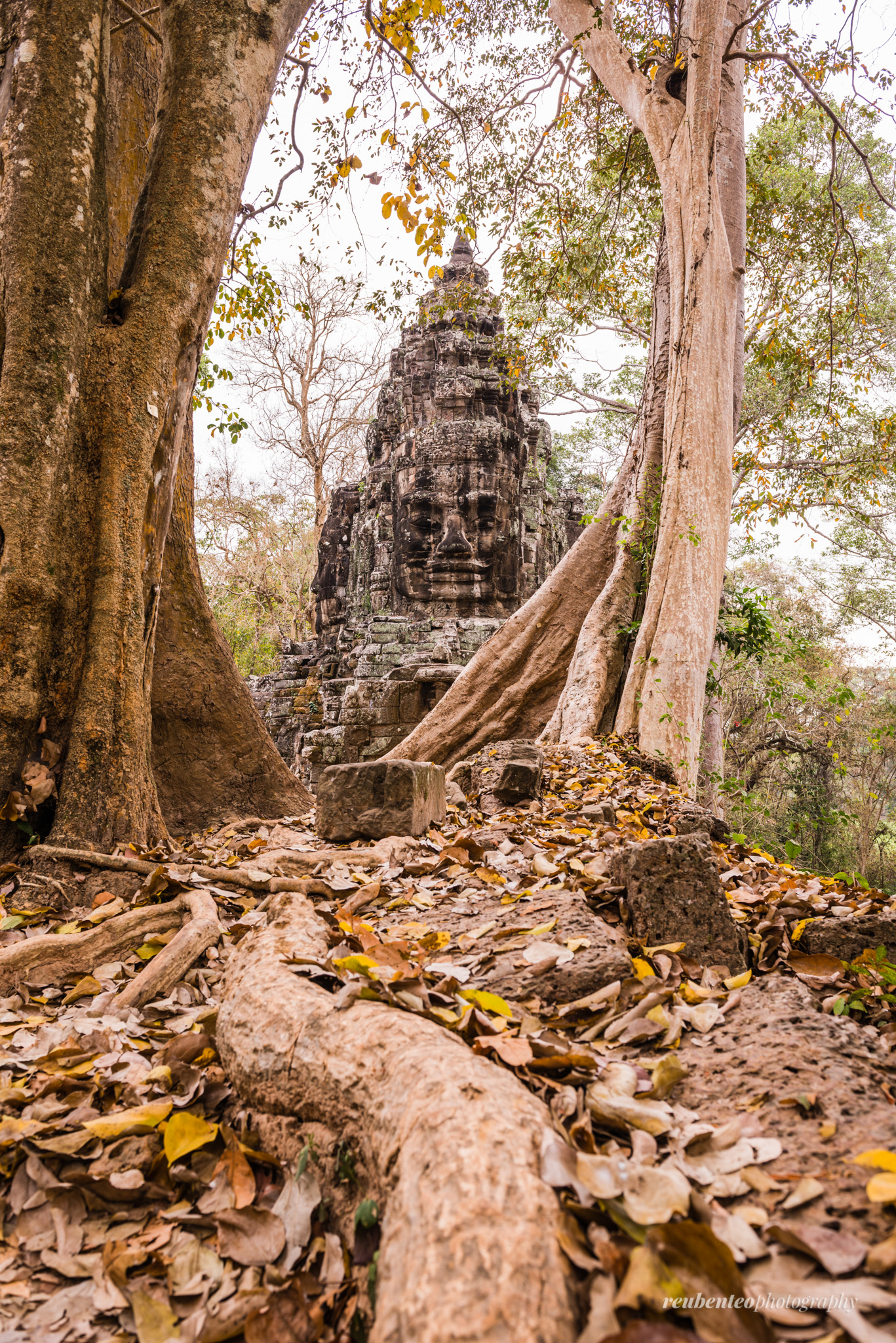 One of the best preserved faces of the Victory Gate 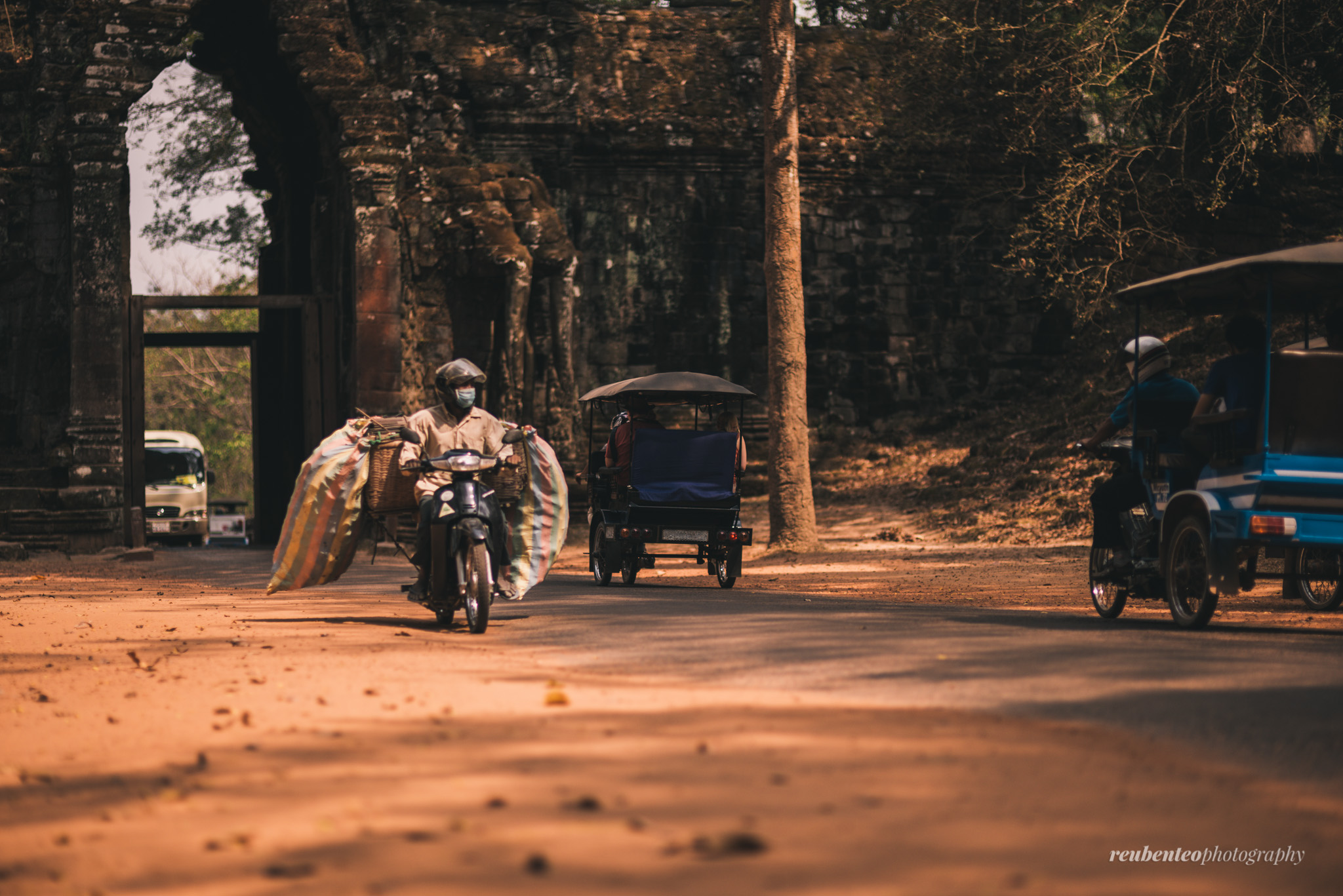 Locals and tourists passing by the South Gate 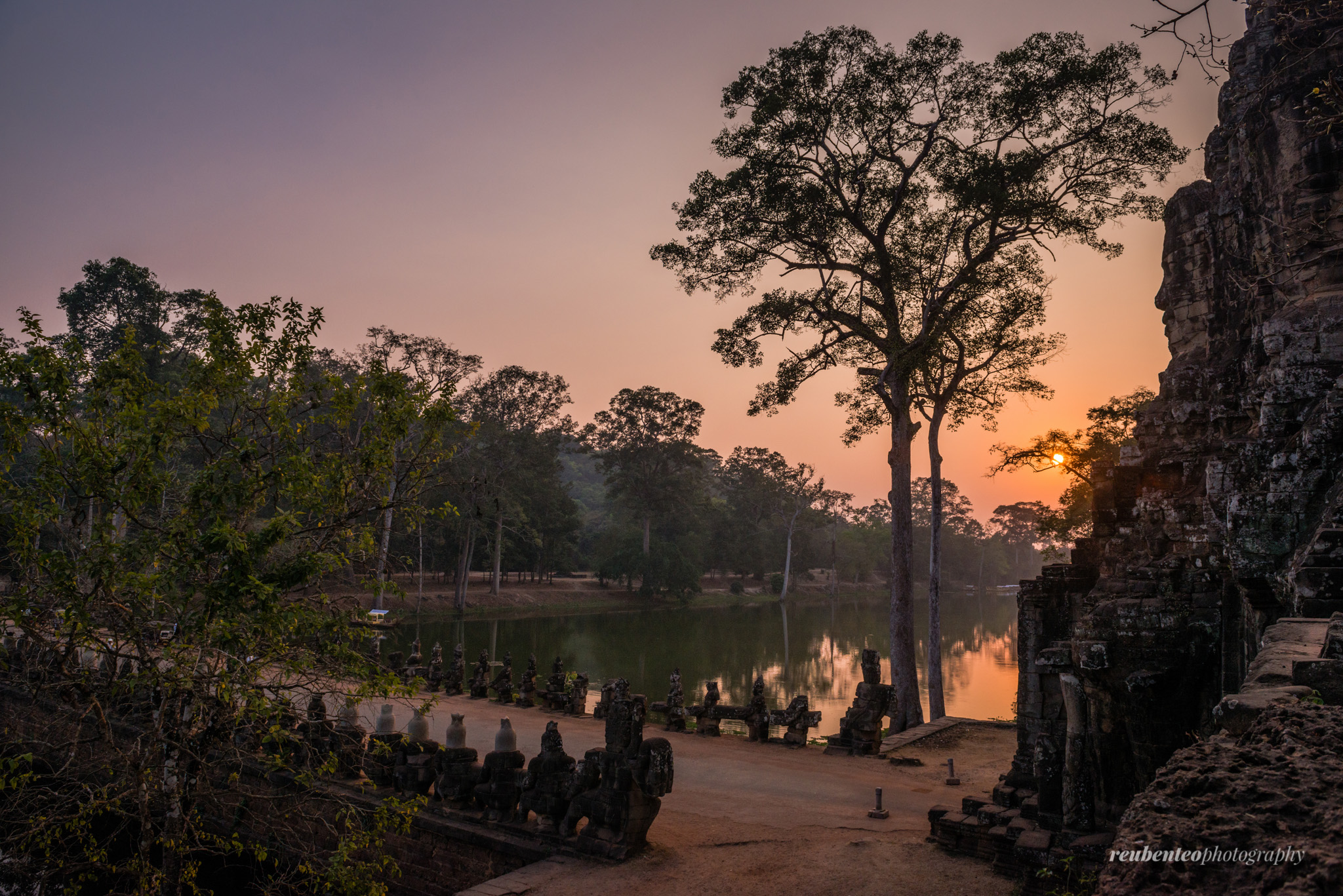 Sunset view at the South Gate 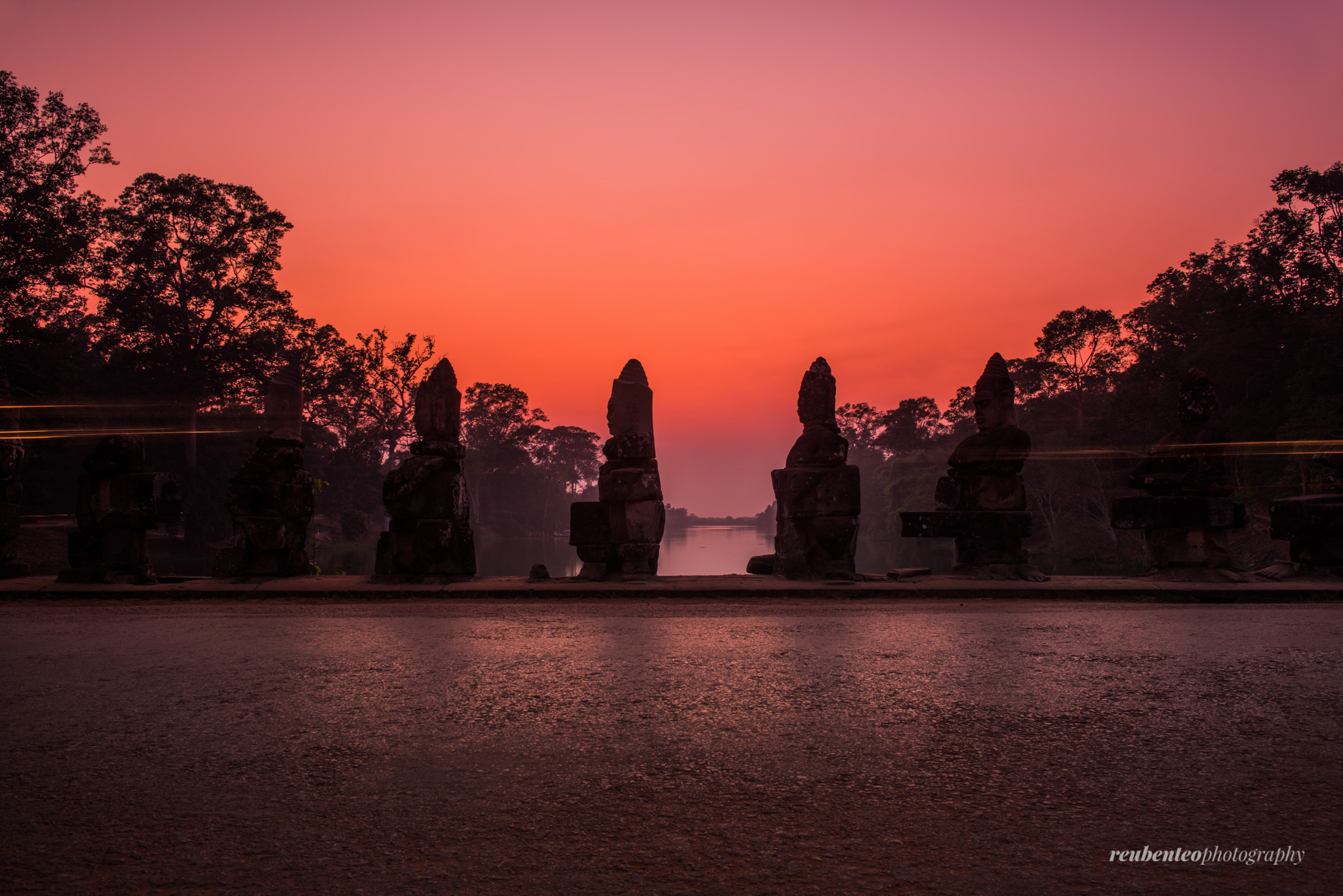 The guardians at the South Gate during twilight

As you can see in the photos above, the sunset here is quite the looker. While most of the tourist crowds are around the famous Phnom Bakheng to see the sunset for Angkor Wat, we stayed here at the South Gate to enjoy the beautiful and peaceful sunset while we took our time to take pictures and chat with our buddy, Kimleng Sang. The view was magnificent and we were in absolute solitude without anyone to bother us as we ended our day with some awesome sunset photos.

There are many temples and structures around Angkor Thom, like the Phimeanakas, Prasat Suor Prat, Preah Pithu and more. Also, what’s fascinating about the capital is that there are four temples located at the corners of the wall, in southwest, northwest, northeast, and southeast. All towers are similar in shape with a cruciform ground plan. On the walls are devata in niches. The pediments show the standing bodhisattva, he was scratched out. A square pavilion sheltered a stele. To the north is the great plaza adjoining 300 metre long Elephant terrace, which must have been a spectacular meeting place 800 years ago. 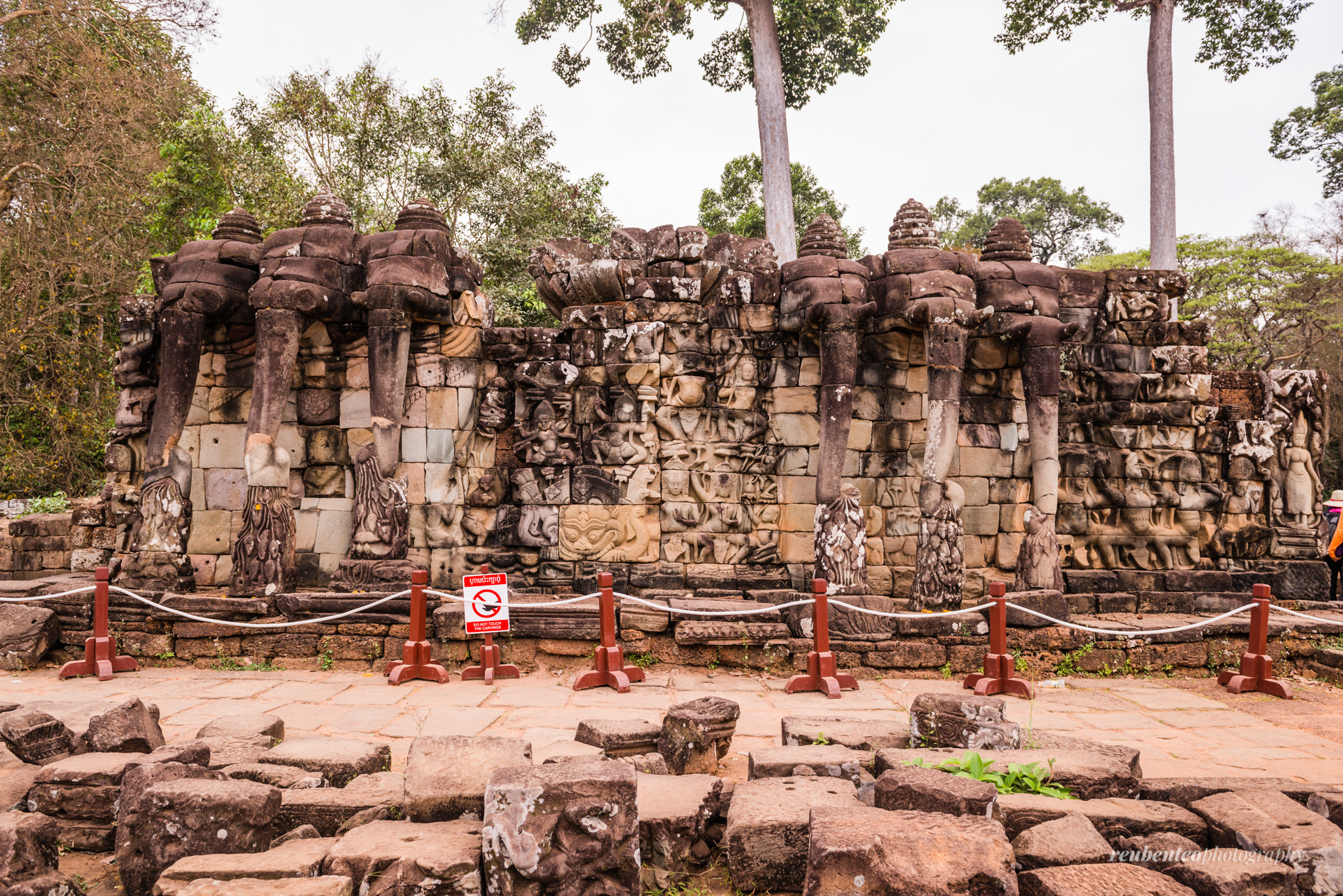 The Terrace of the Elephants

Terrace of the Elephants is an impressive, two and a half-meter tall, 300 meter long terrace wall adorned with carved elephants and Garudas spanning the front of Baphuon, Phimeanakas and the Royal Palace area at the heart of Angkor Thom. The northern section of the wall displays some particularly fine sculpture including the five headed horse and scenes of warriors and dancers. Constructed in part by Jayavarman VII and extended by his successor. The wall faces east so the best lighting for photography before noon. The Terrace of the Leper King is at the north end of the Terrace of the Elephants. 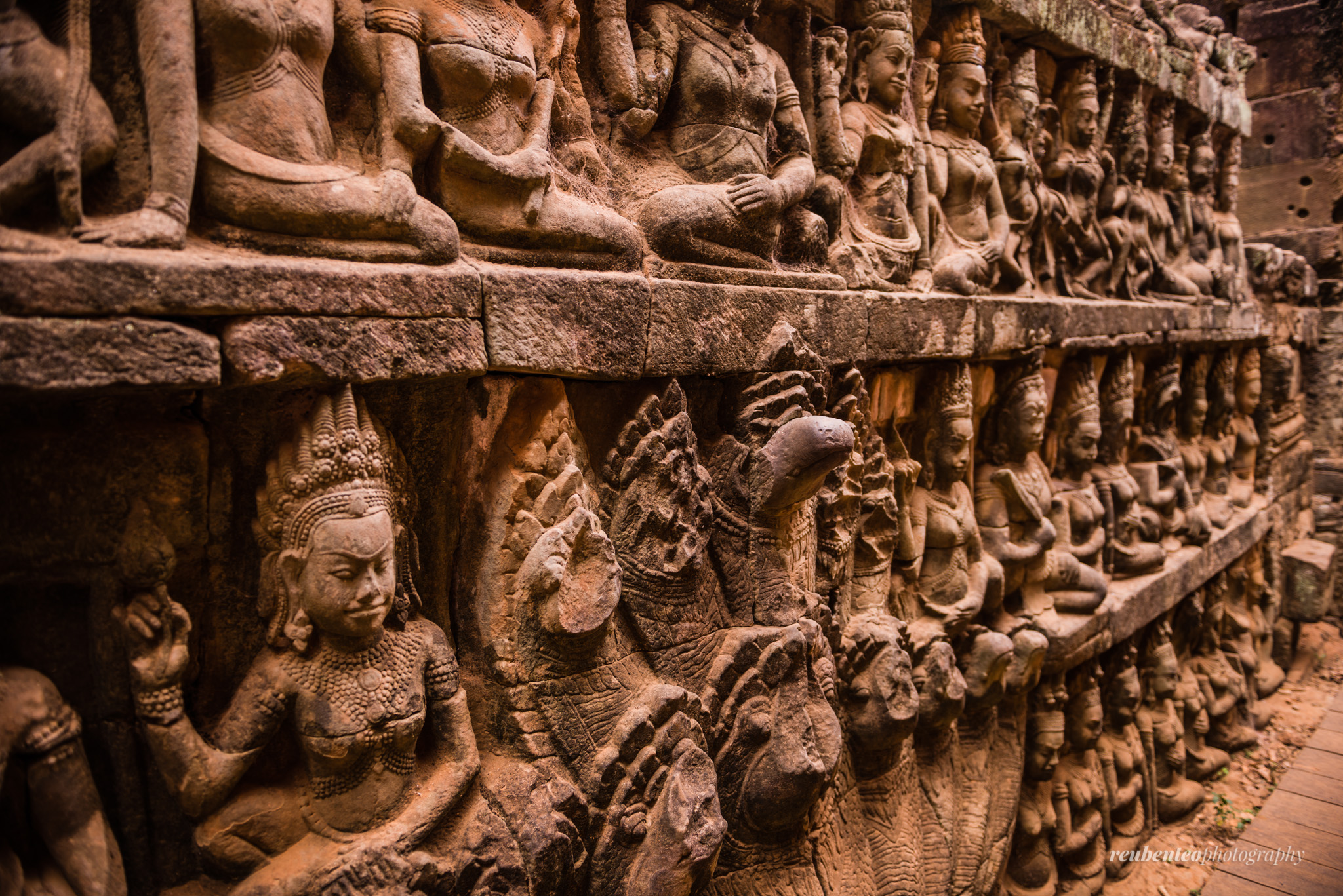 Beautifully crafted bas relief at the Terrace of the Elephants 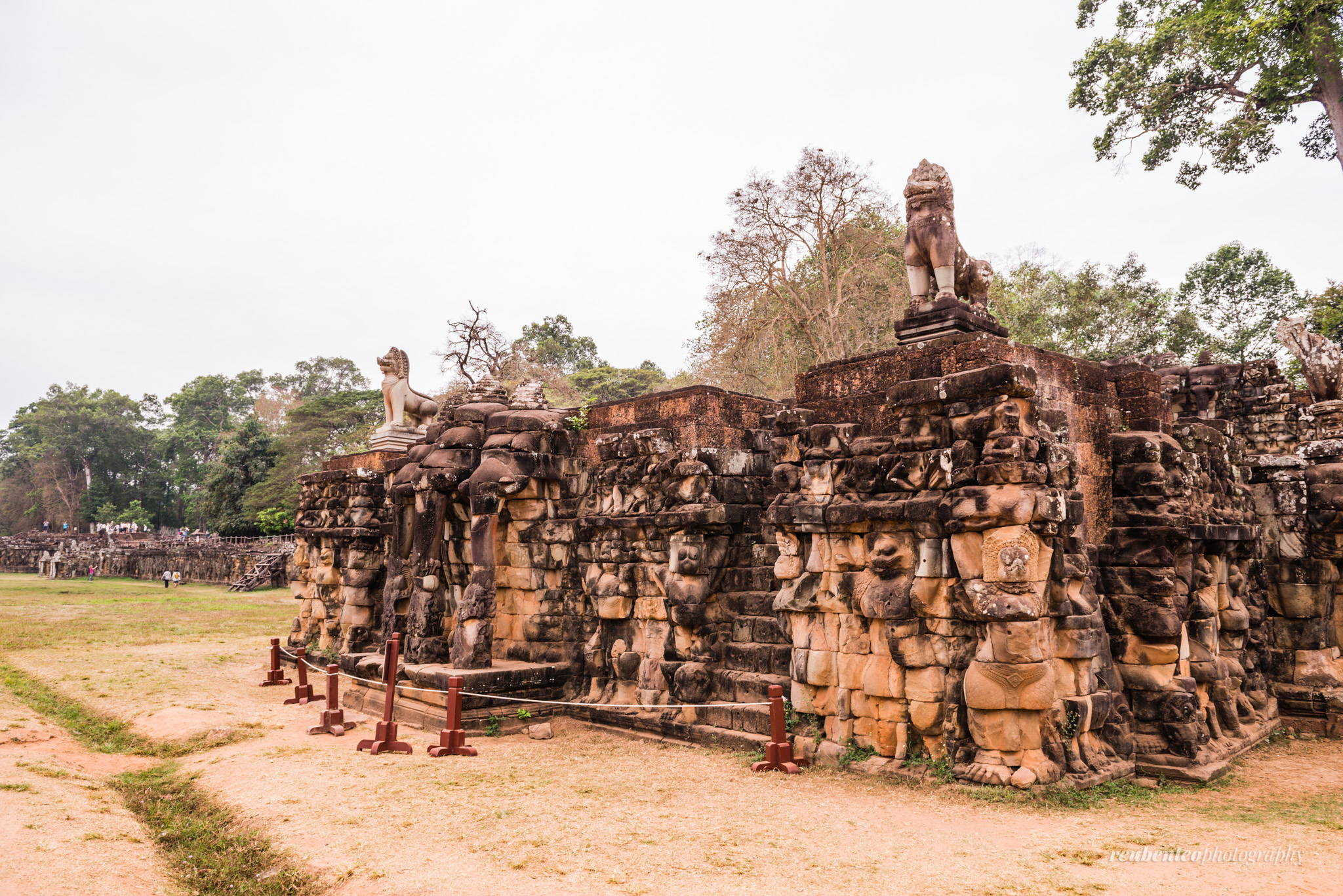 Near the end of the terrace 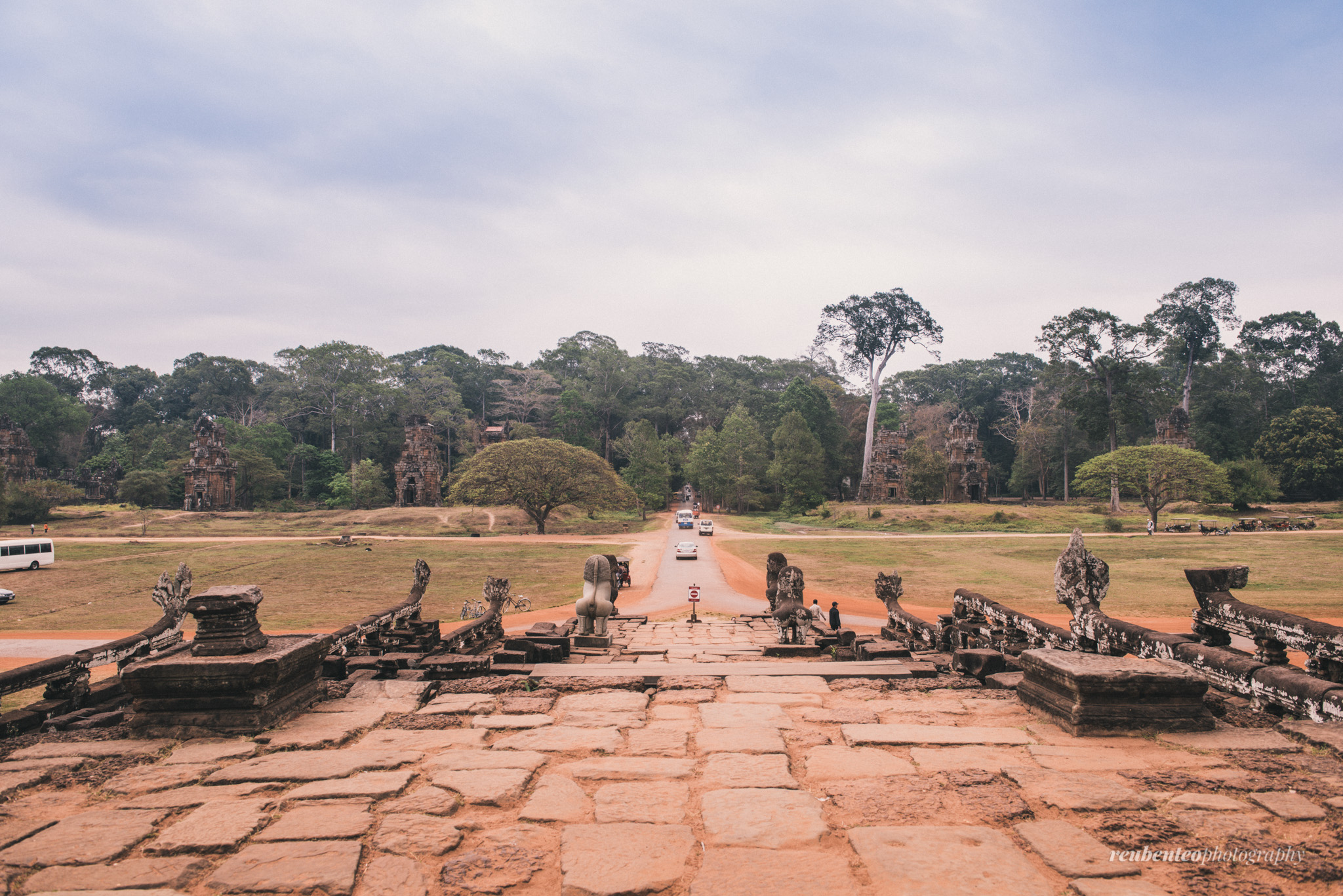 View from The Terrace of the Elephants where the King used to stand. (From this view you may also see 12 towers called Prasat Suor Prat. It is still unknown what these towers were used for)

The Terrace of Elephants was used as a giant reviewing stand for public ceremonies and served as a base for the king’s grand audience hall. It has five outworks extending towards the Central Square-three in the centre and one at each end. The middle section of the retaining wall is decorated with life size garuda and lions; towards either end are the two parts of the famous parade of elephants complete with their Khmer mahouts. 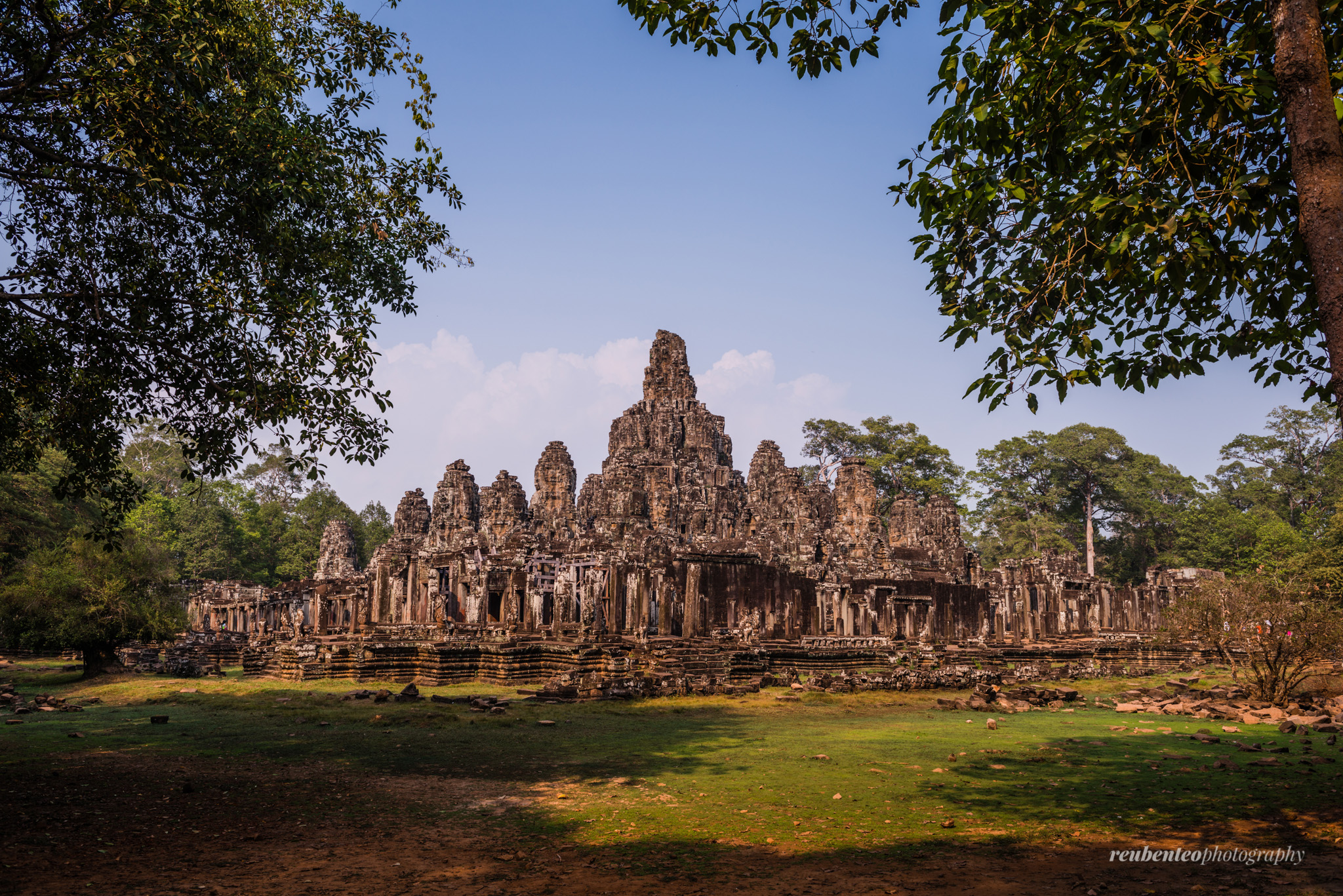 The beautiful temple of Bayon

At the centre of the great city of Angkor lies the Bayon Temple. It has 52 towers with the huge serene faces thought to represent King Jayavarman VII. It is famous for it’s hundreds of faces that decorate the entire structure of the temple. It is a masterpiece of King Jayavarma VII and it is also one of the most recognised and important temples of the region. I will have another post about the Bayon Temple. So, let’s all enjoy some other random shots that we shot during our trips around Angkor Thom: 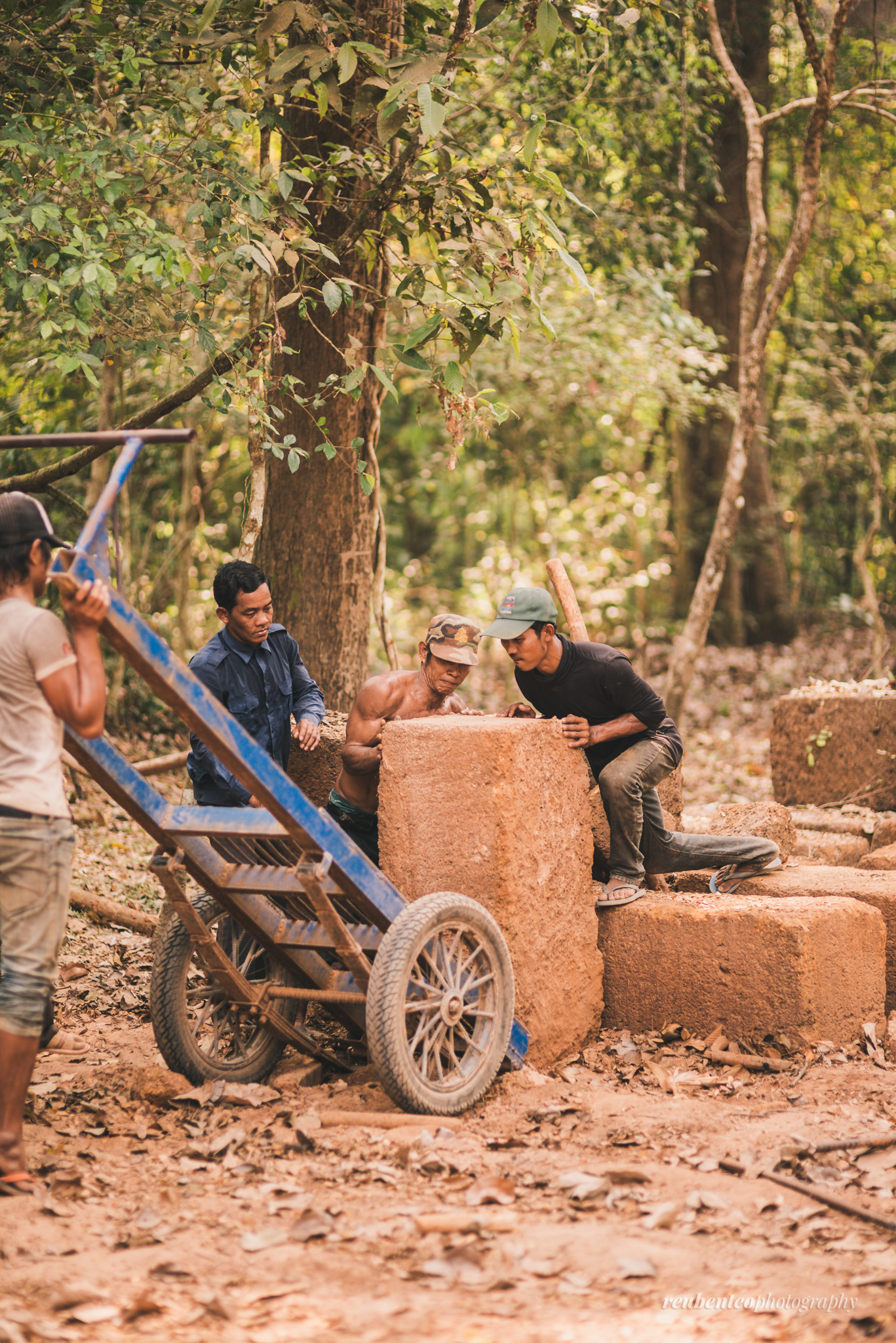 Locals moving the rocks from Kulen at the entrance of the North Gate. Each block is as heavy as it looks from this photo. Imagine moving these things for construction without the use of modern machineries back in the days 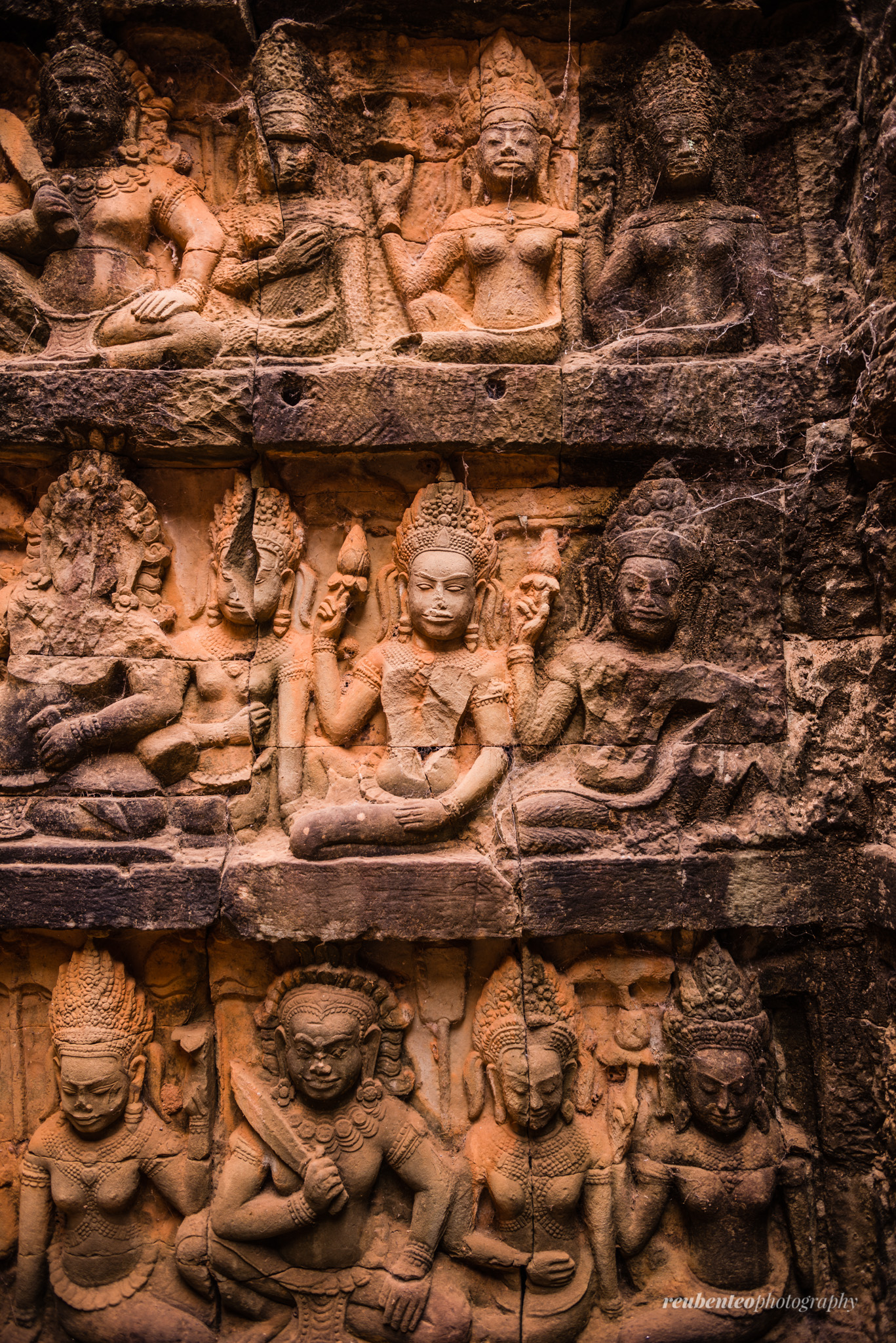 Hindu bas relief at the Terrace of the Elephants 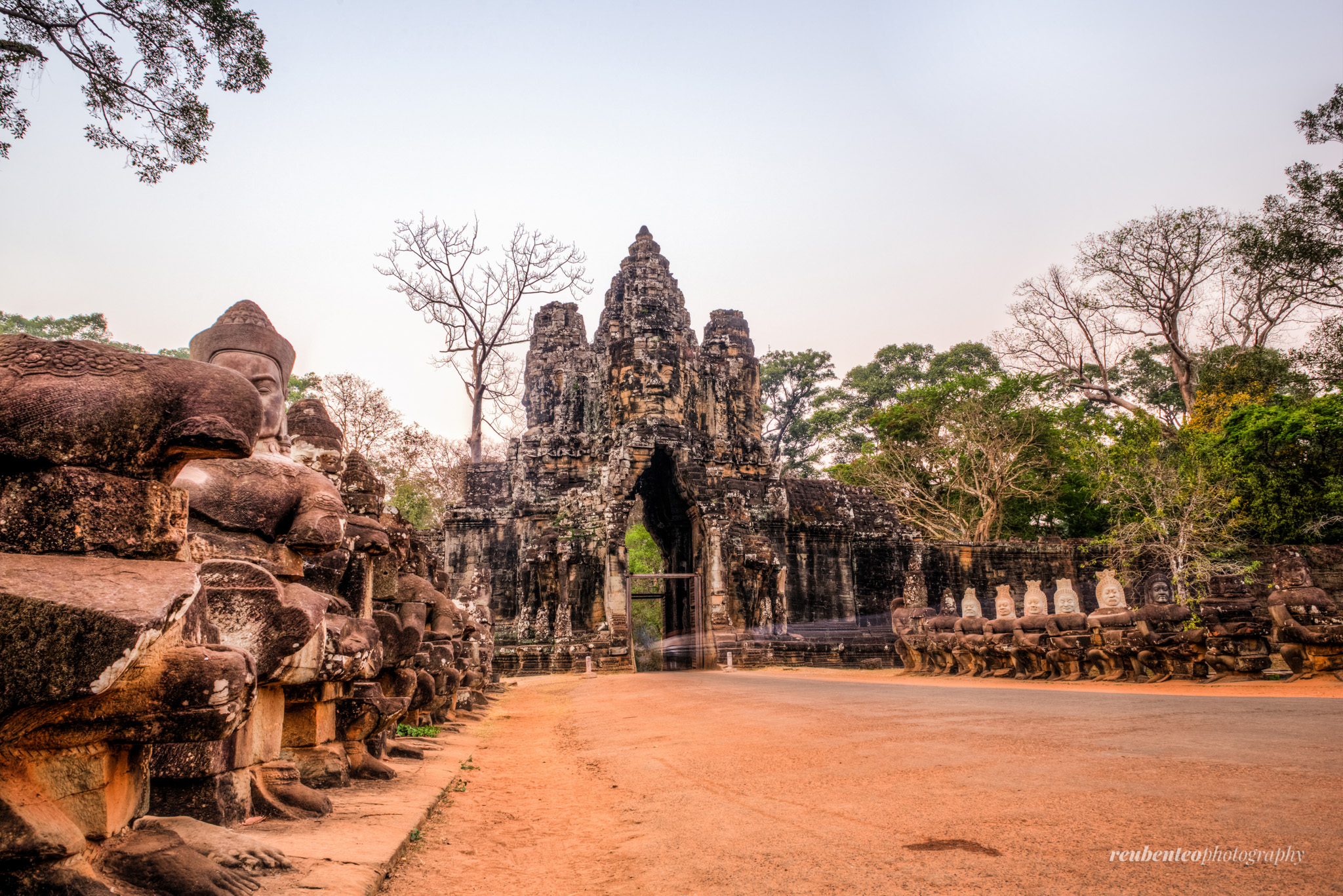 The main entrance for tourists, or The South Gate 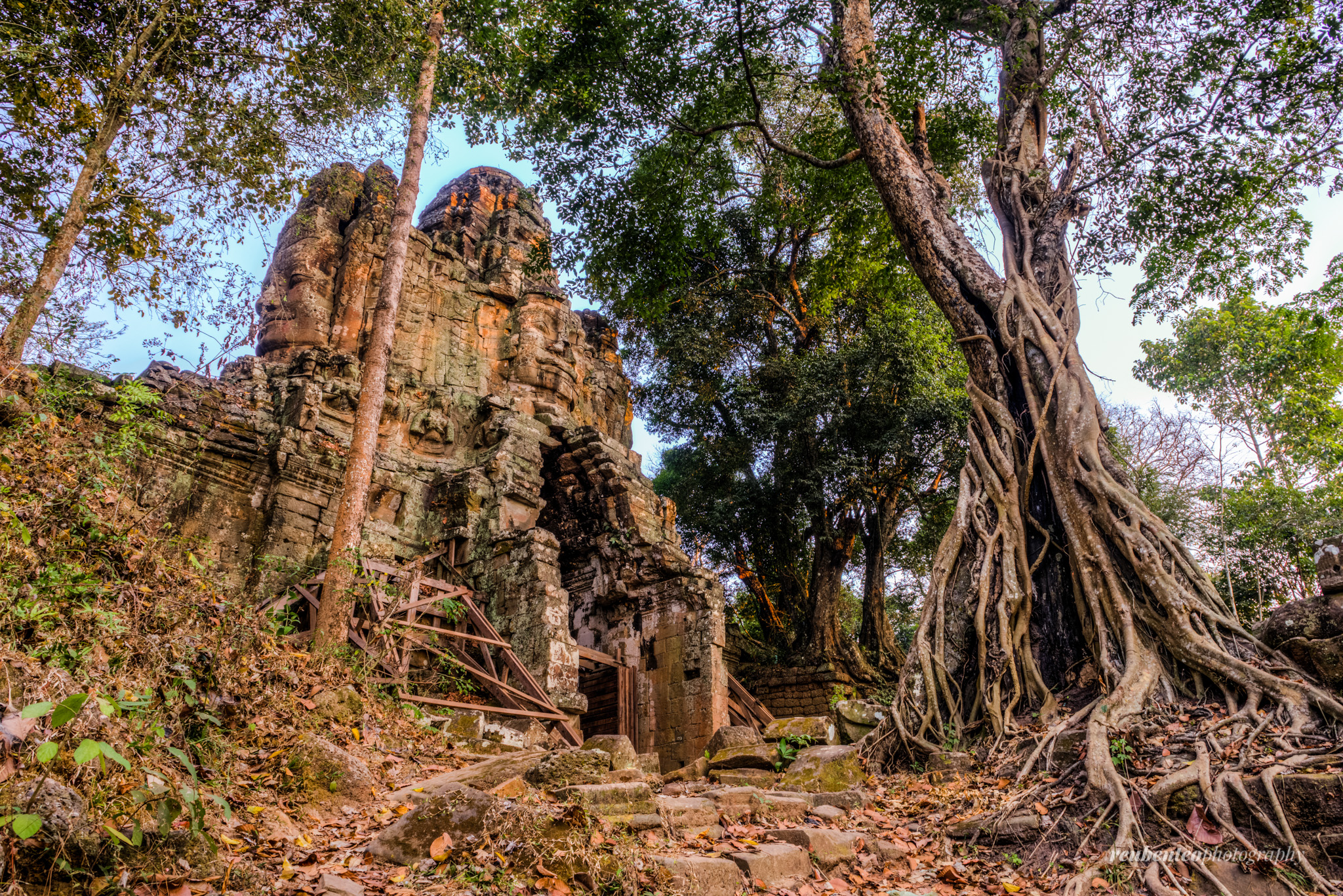 The beautiful and quiet West Gate 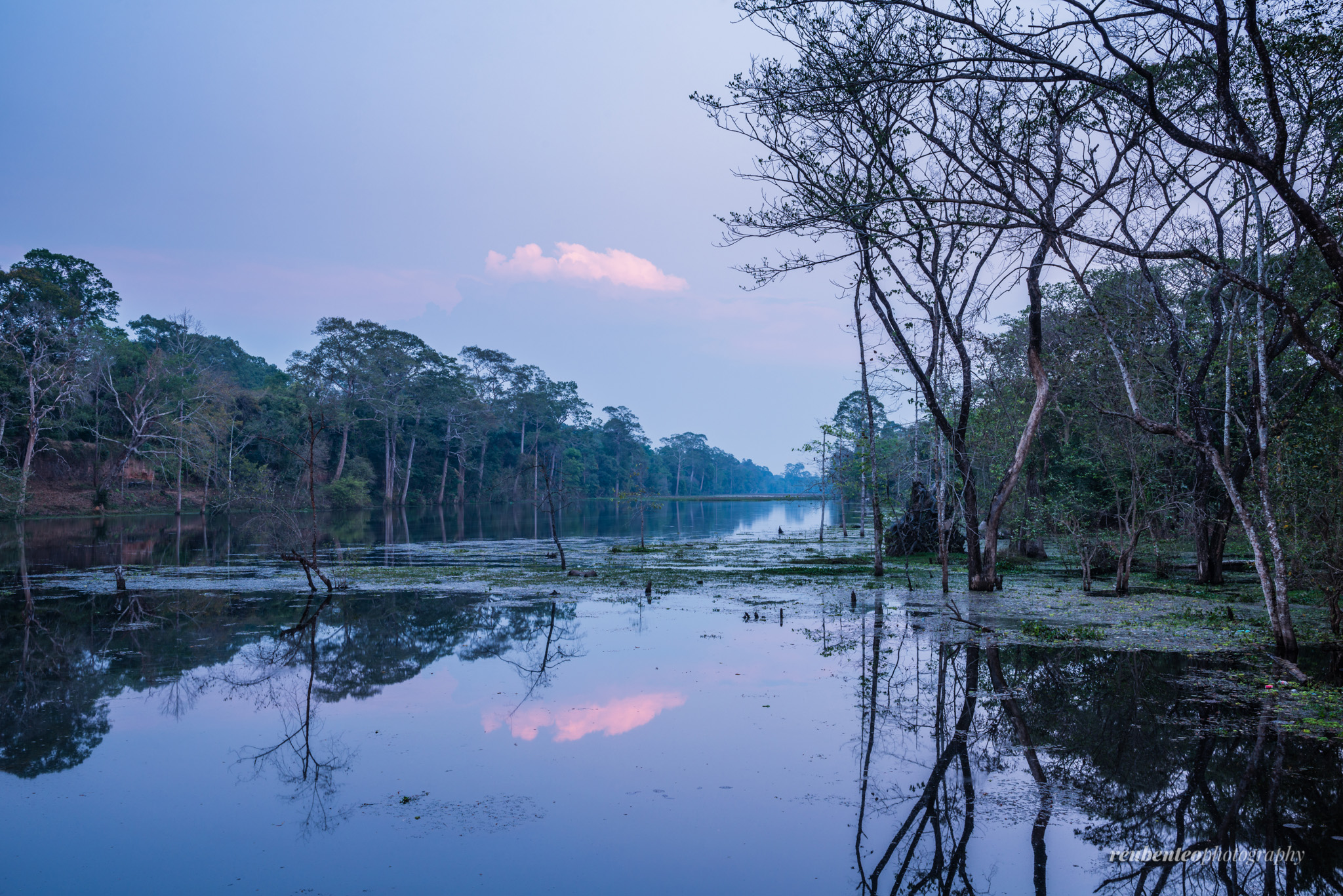