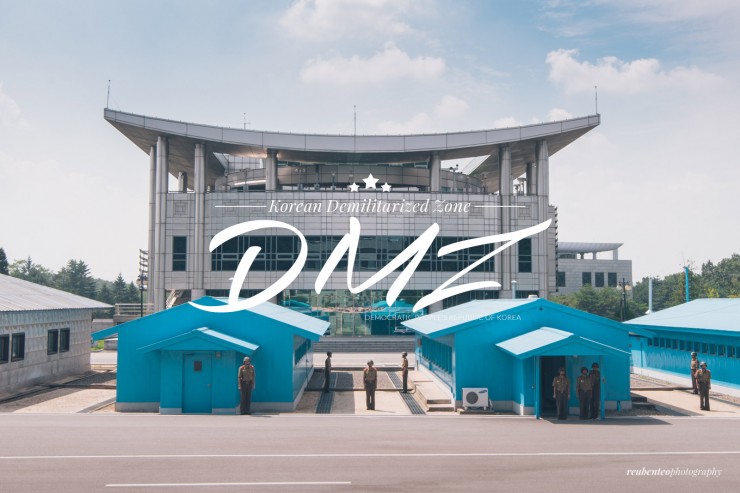 No trip to any side of the Korean peninsula is complete without setting foot at human history’s most tragic and ironic strip of land, the Korean Demilitarized Zone, or most commonly known as the DMZ. As all of us know, this serves as a buffer zone between both sides of Korea. It is the de facto border barrier that runs through the 38th parallel. It was created during the Korean Armistice Agreement between North Korea, China and the United Nations forces back in 1953. It is 250km long and approximately 4km wide. Despite it’s name, it is the world’s most heavily militarized border.

The famous House of Freedom, Panmon Hall and the blue buildings we always see in the photos is only a small portion of the DMZ. This area is in fact called the Joint Security Area, or JSA. At times, it’s also known as the ‘Truce Village’ in the media. The JSA also has the iconic imagery of soldiers from both sides standing face-to-face everyday. Unfortunately, the South Korean and United States army were hiding inside the House of Freedom spying at us while we’re there. The JSA is located in the Panmunjom village near to South Korea. We traveled down to the JSA from Pyongyang early in the morning. The drive took about 2 hours. On the way, we passed by Kaesong City, most notable for the Kaesŏng Industrial Park, operated as a collaborative economic development with South Korea. Also, Kaesong was the capital city of the ancient Koryo Dynasty. 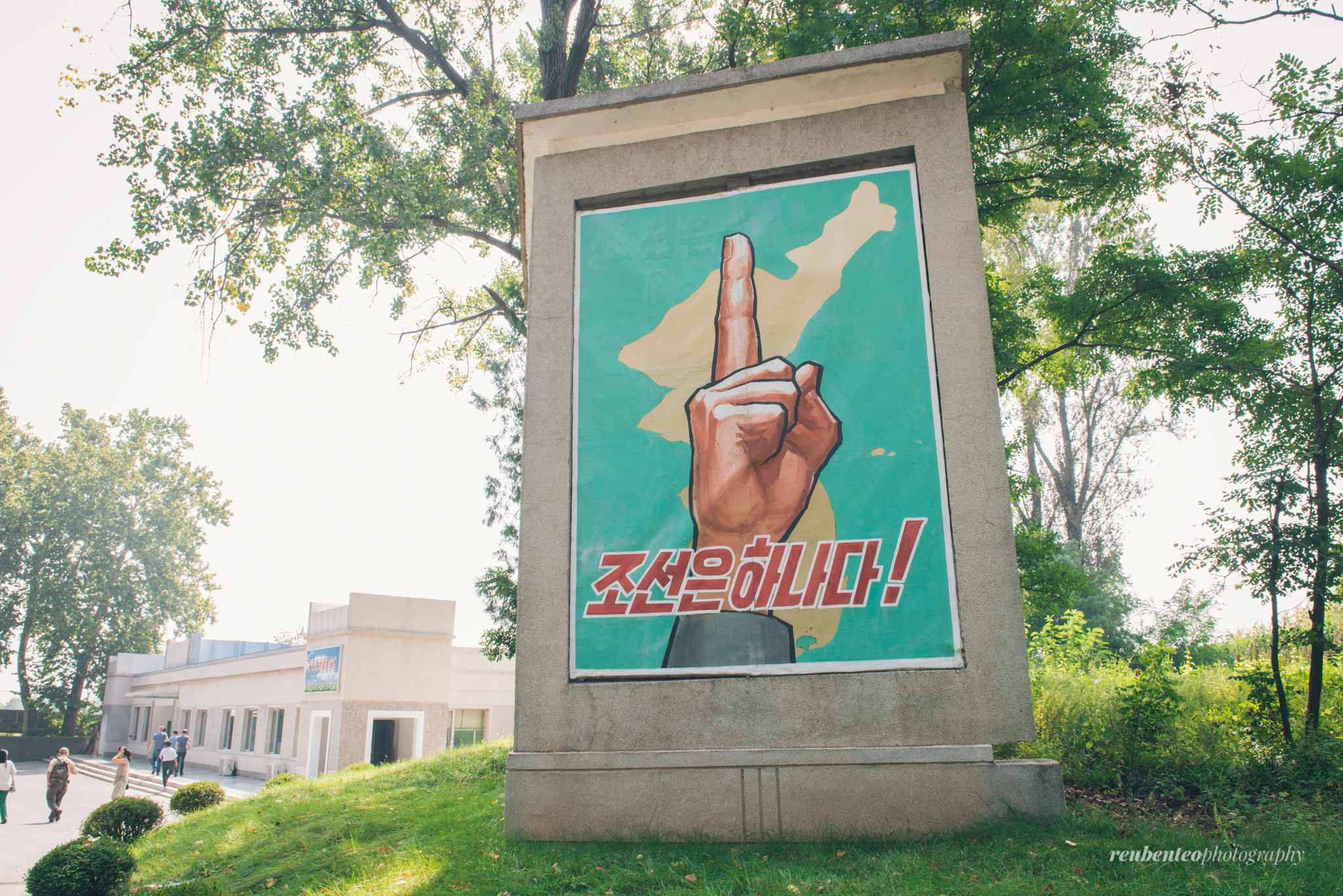 Korea is One! The only photo you can take before entering the JSA

Before we could enter the vicinity of the JSA, we had to stop at an area guarded by extremely strict-looking soldiers. We were first greeted by this huge green poster that shows the hand signal for ‘1’ and the background of the Korean Peninsula. This was the only picture we could take as warned by our guide, Mr. Jong. We were trying to guess what the sign meant, as it was written only in Korean. Our guesses included things like “Just this ONE photo!” or “There’s only ONE true Korea which points to the north” or “Shhhhh!!!”? As we were giggling away, Mr. Jong saw our silly faces and came to tell us that the poster says “KOREA IS ONE”. Our giggles turned into serious faces as we headed to this shop selling all sorts of North Korean stuff.

After purchasing some North Korean goods from the shop, we were outside waiting for our JSA bodyguard and local guide to lead us into the JSA. Suddenly, we heard some soldiers yelling at a lady tourist. They seemed to be arguing about something. The environment suddenly felt tense as they got louder and louder. We turned around and tried to see what the commotion was about. The soldiers seem to be pointing at the lady’s camera as if it was some kind of a threat. Mr. Jong then told us that the lady didn’t listen and was taking photos other than the poster and was spotted by the guards. The lady was then escorted into the building for quite a while. What we heard was that the guards then checked her camera for sensitive photos. Her photos from this area were all deleted and she came out looking shocked and in despair. It was quite a scene and all of us suddenly felt rather alert. 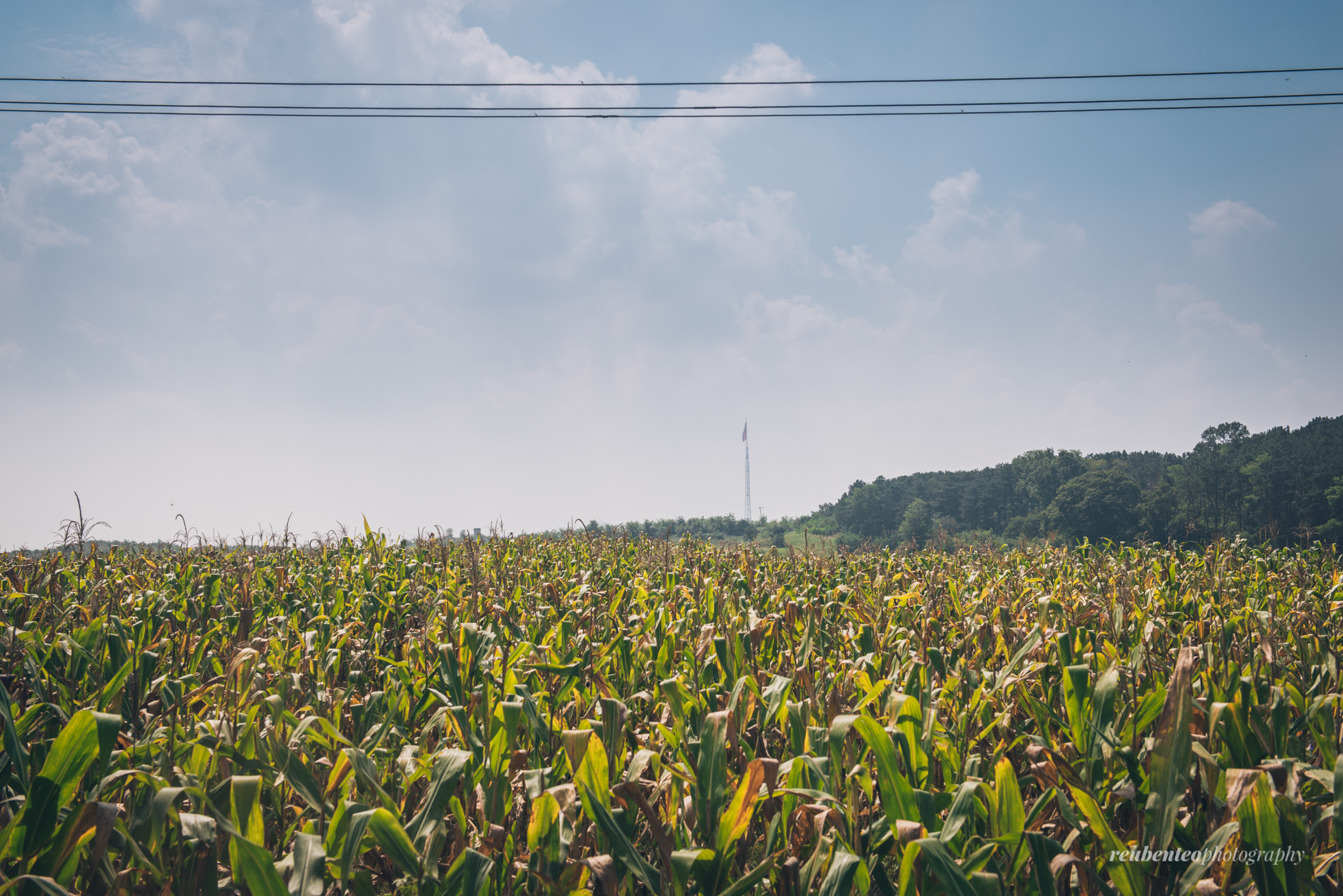 After the scene, we were ready to enter the JSA. We were escorted by armed guards. The road to the JSA is about 2km. On the way, we stopped by a tiny building where the armistice treaty was signed. Then we headed to the North Korean Peace Museum, which can be recognised by the dove icon on the building itself.This museum housed the actual Armistice Agreement and also photos of the Korean War. Here, the soldier guide explained to us their version of the Korean War and how it began and who provoked the war and such. Also, he mentioned that Korea was divided due to foreign policy and not by the will of the Korean people at all. He too said that after the armistice was signed, it was the American Imperialists that broke the declaration of the armistice and did not leave South Korean soil. This was an act of provocation. The museum also housed the axe and club used in the ‘Axe Murder Incident‘.

The most notable thing in the museum is definitely the Armistice Agreement that is kept in a sealed container along with the flags used during that time. They were proud of the fact that their North Korean flag looked new and the colours hadn’t ran while the United Nations flag’s blue had withered away, provided that they had not tempered with the flag and they were kept in the containers since the 50s. Oddly, China’s flag wasn’t on display. After that, we were then ready to see the infamous blue buildings and South Korea’s House of Freedom from the North Korean side. 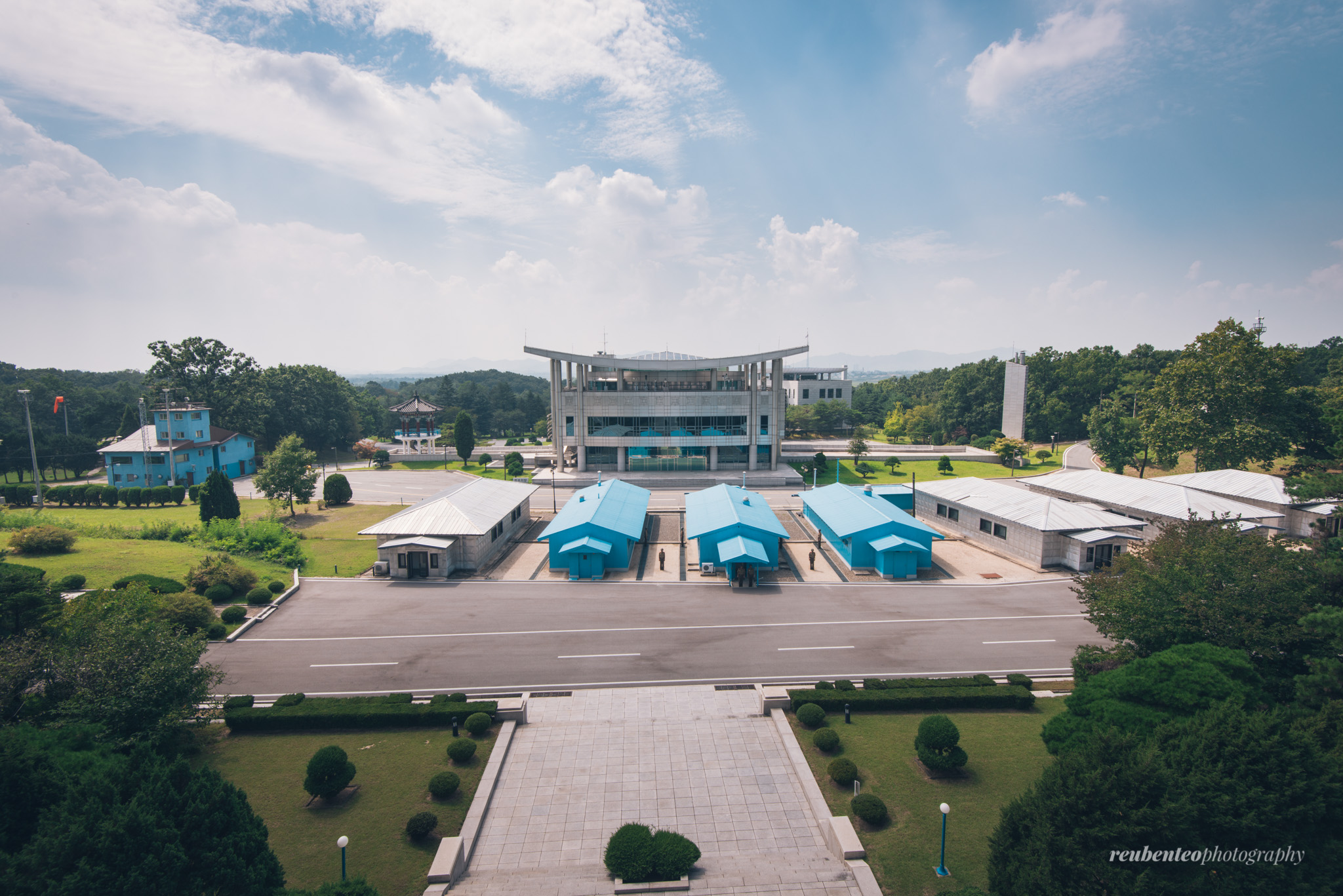 We sat down inside the blue building where the North-South discussions were held. While inside the building, you are free to roam around. You are not allowed to open the door that leads to the South of course and there are two North Korean soldiers guarding the door. From the window, we could see the concrete line that divides the North from the South. With that indication, Fann was moving to and fro South Korea inside the building. Also, the long main table is placed right in the center of the division line. We then headed up to the Panmon Hall where we could get a better view of the JSA. After lots of photo opportunities, it was time to say goodbye and were escorted back to the JSA gate. After that, we headed for one of the best lunches at the Kaesong Folk Hotel. We were served traditional Korean dishes with metal chopsticks and bowls. It was simply delicious.

It was quite an eye opening and educational trip to the DMZ. We got the chance to learn and understand a different perspective of Korean War and the division of the two Koreas. A very different angle and unexpected turn of events compared to ones we’ve learnt in our history books. Quite a twist I must add. No matter who is telling the truth or who is throwing lies at who, I still hope that the two Koreas will reunite under one flag in a very peaceful manner without gunfire and definitely without the influence of any foreign power, especially the Americans.. and China (if they give a *hoot*). 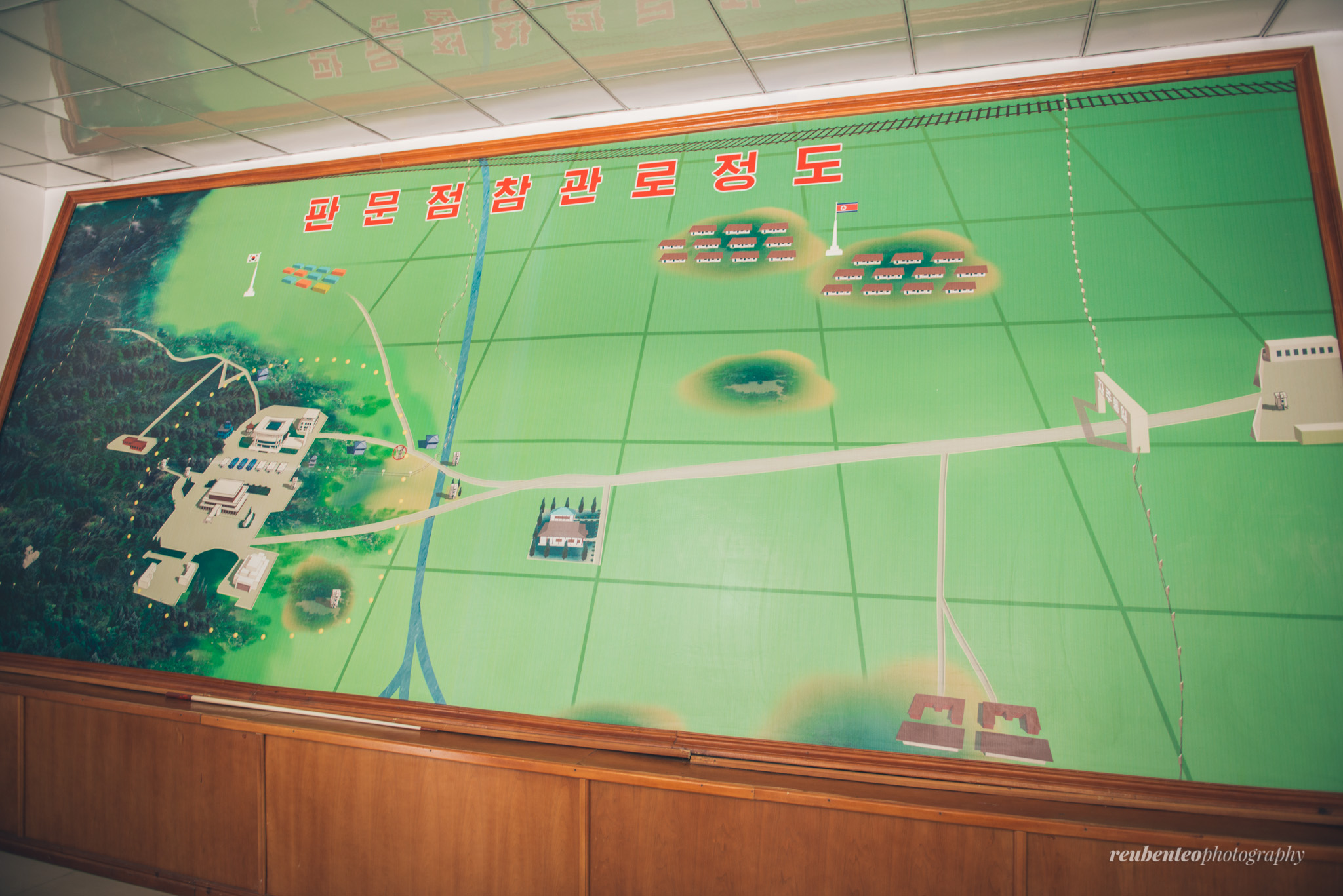 Map of the Joint Security Area in the briefing room 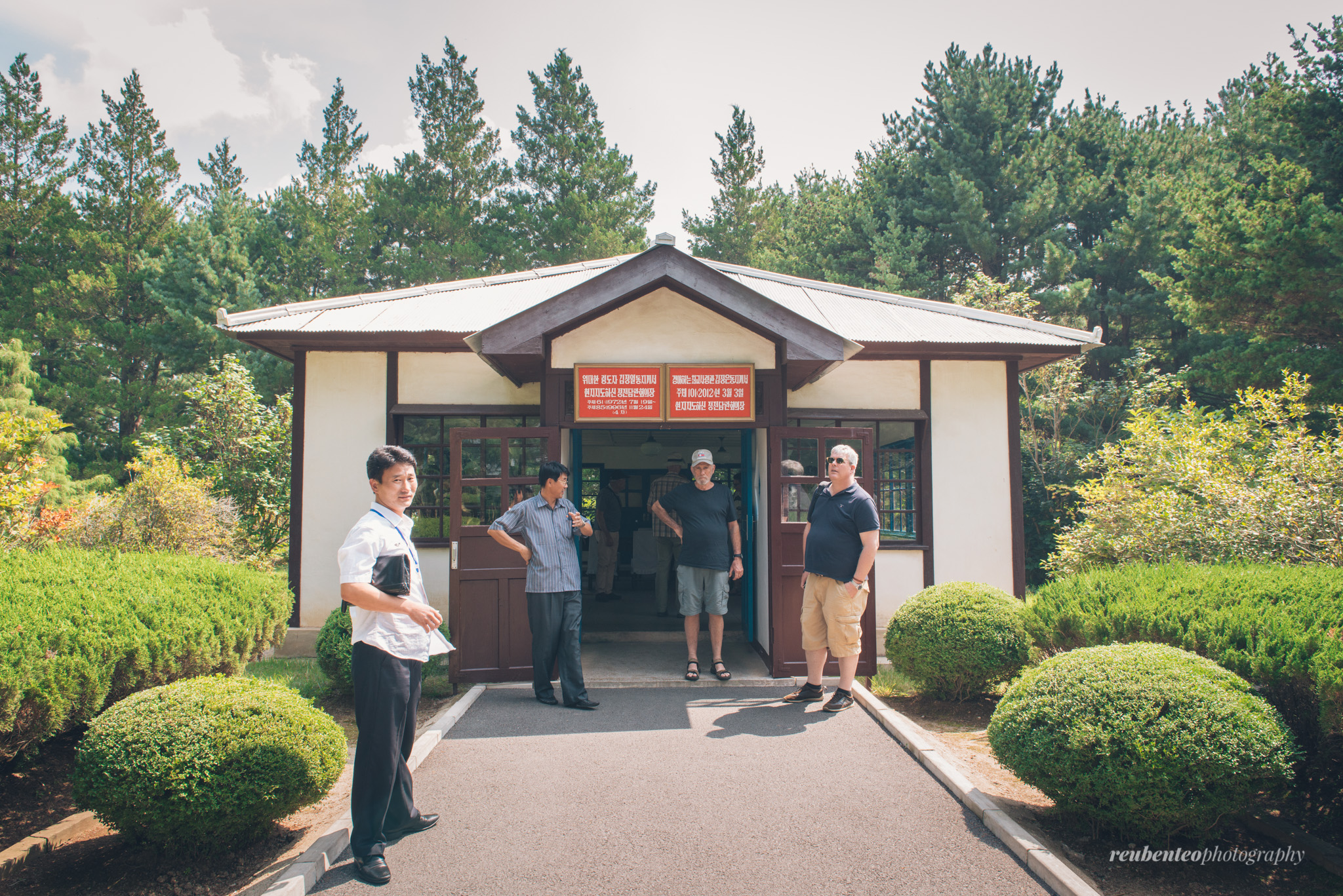 The tiny building where the Armistice Agreement was signed 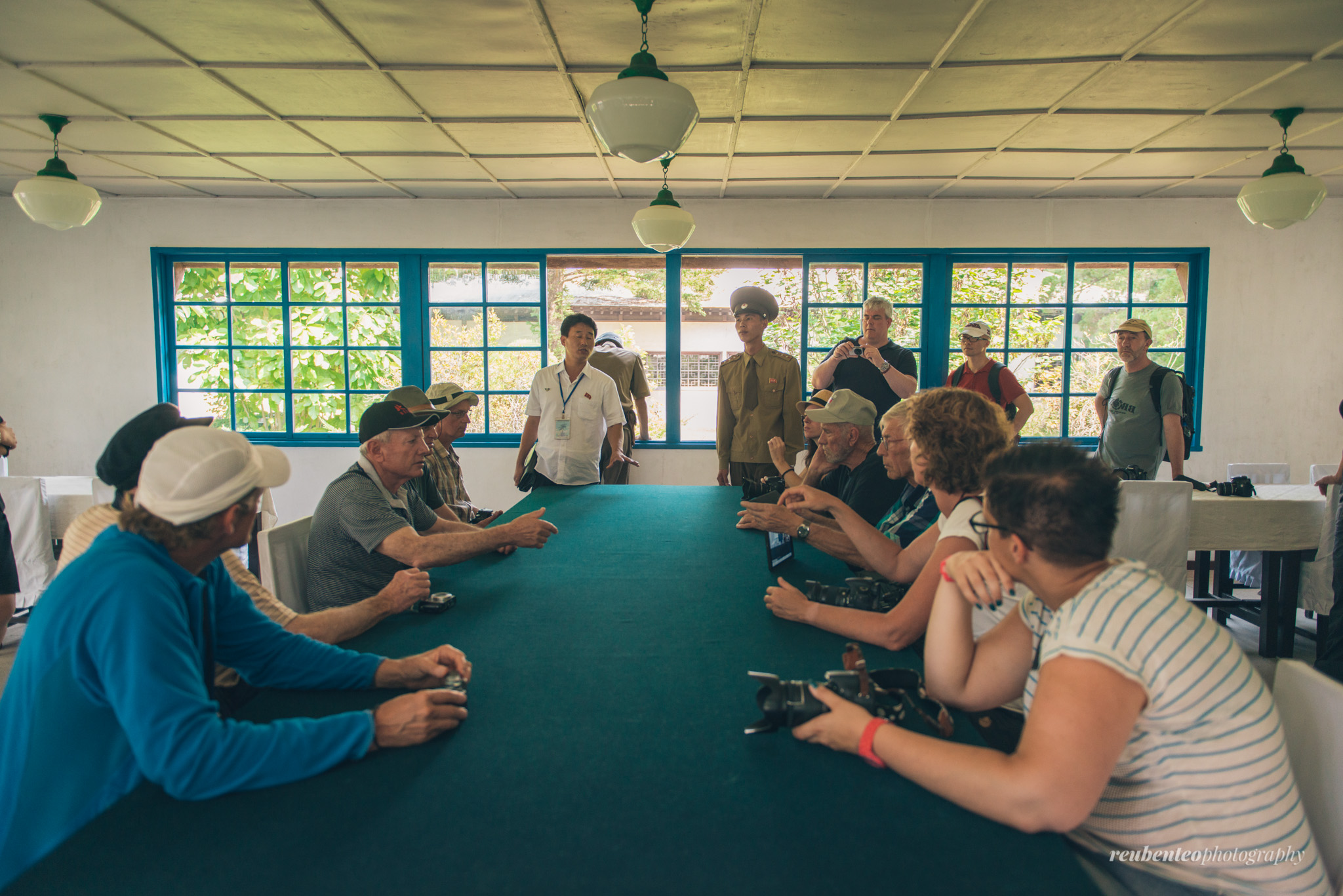 The table where the Armistice Agreement was signed 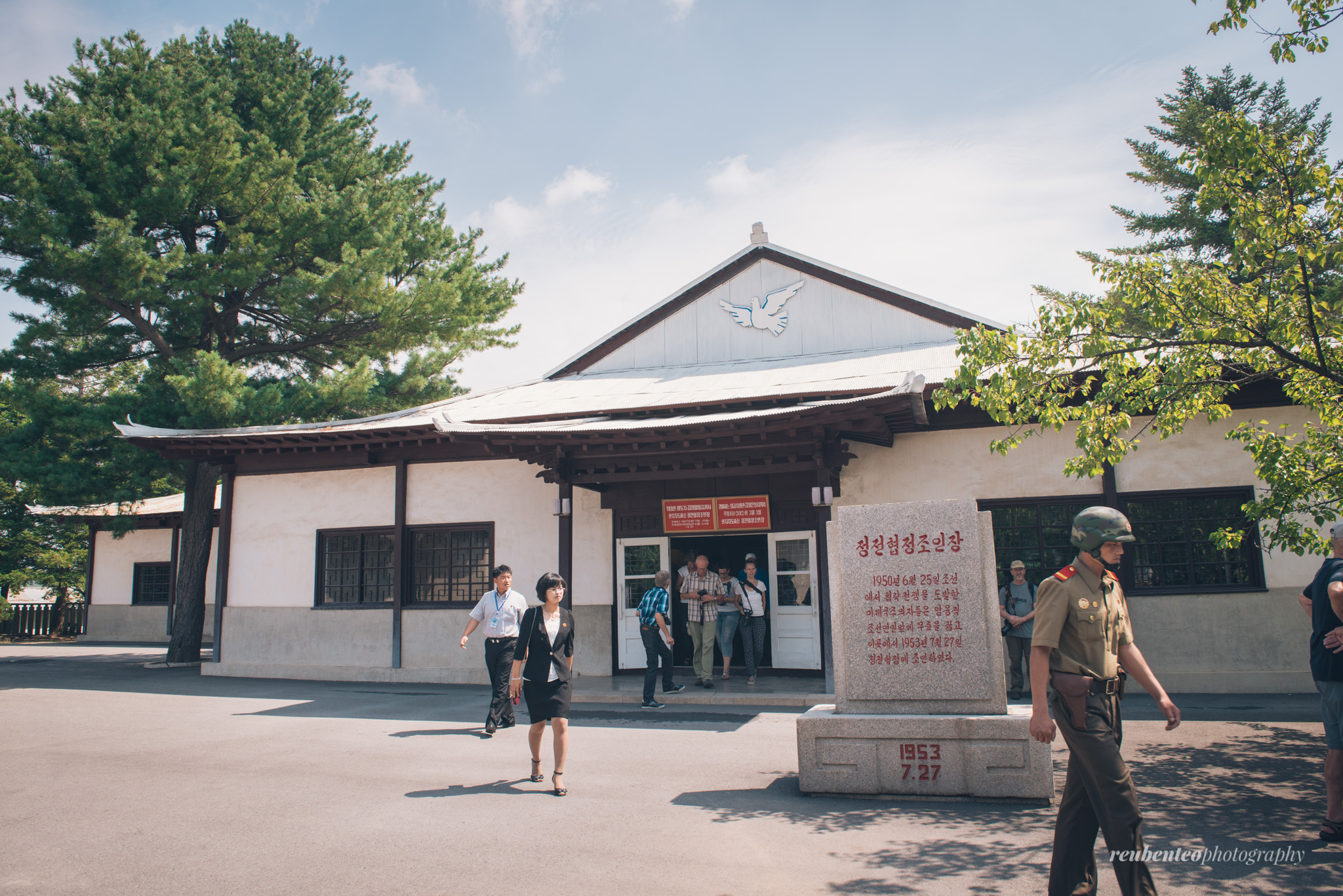 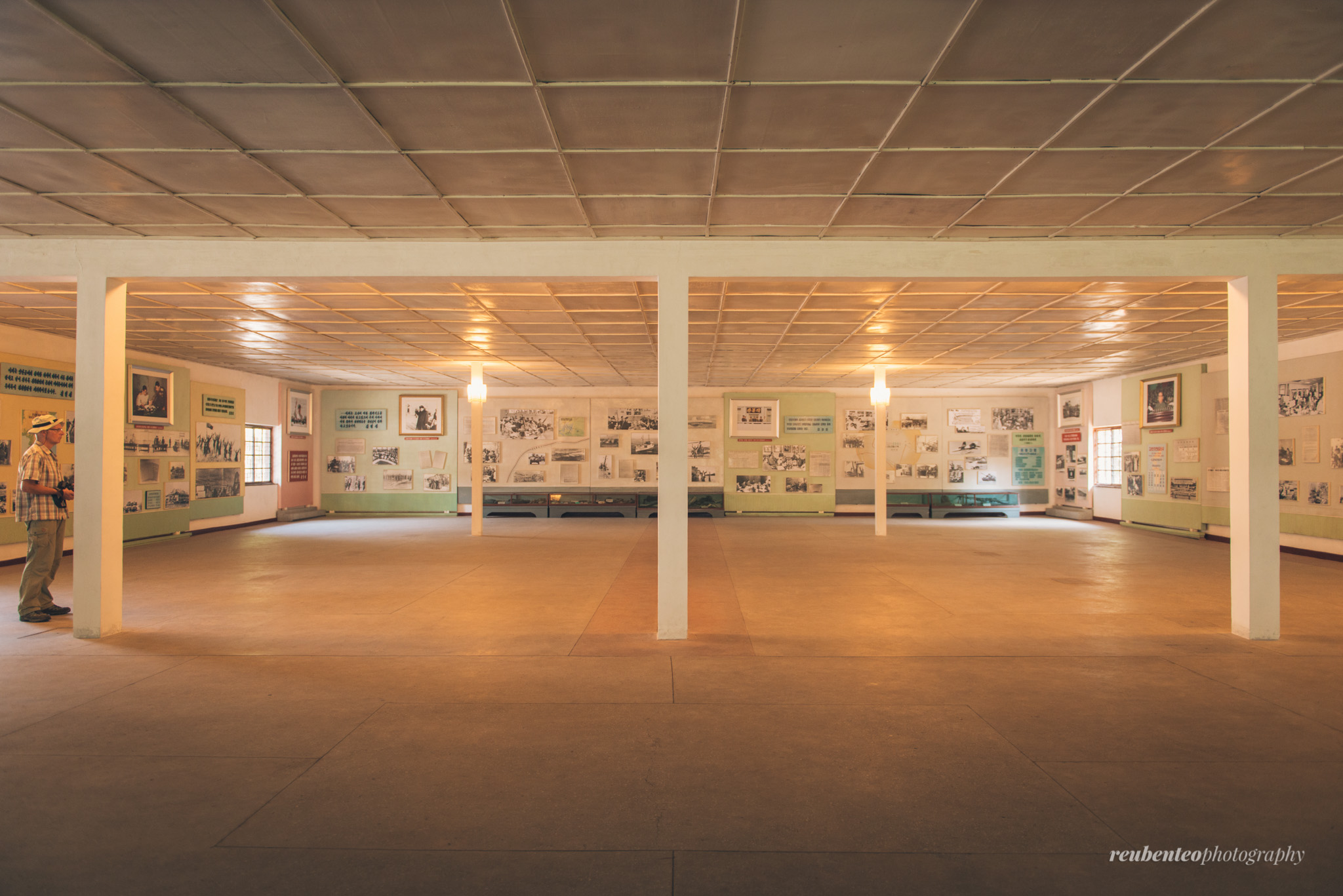 The interior of the North Korean Peace Museum 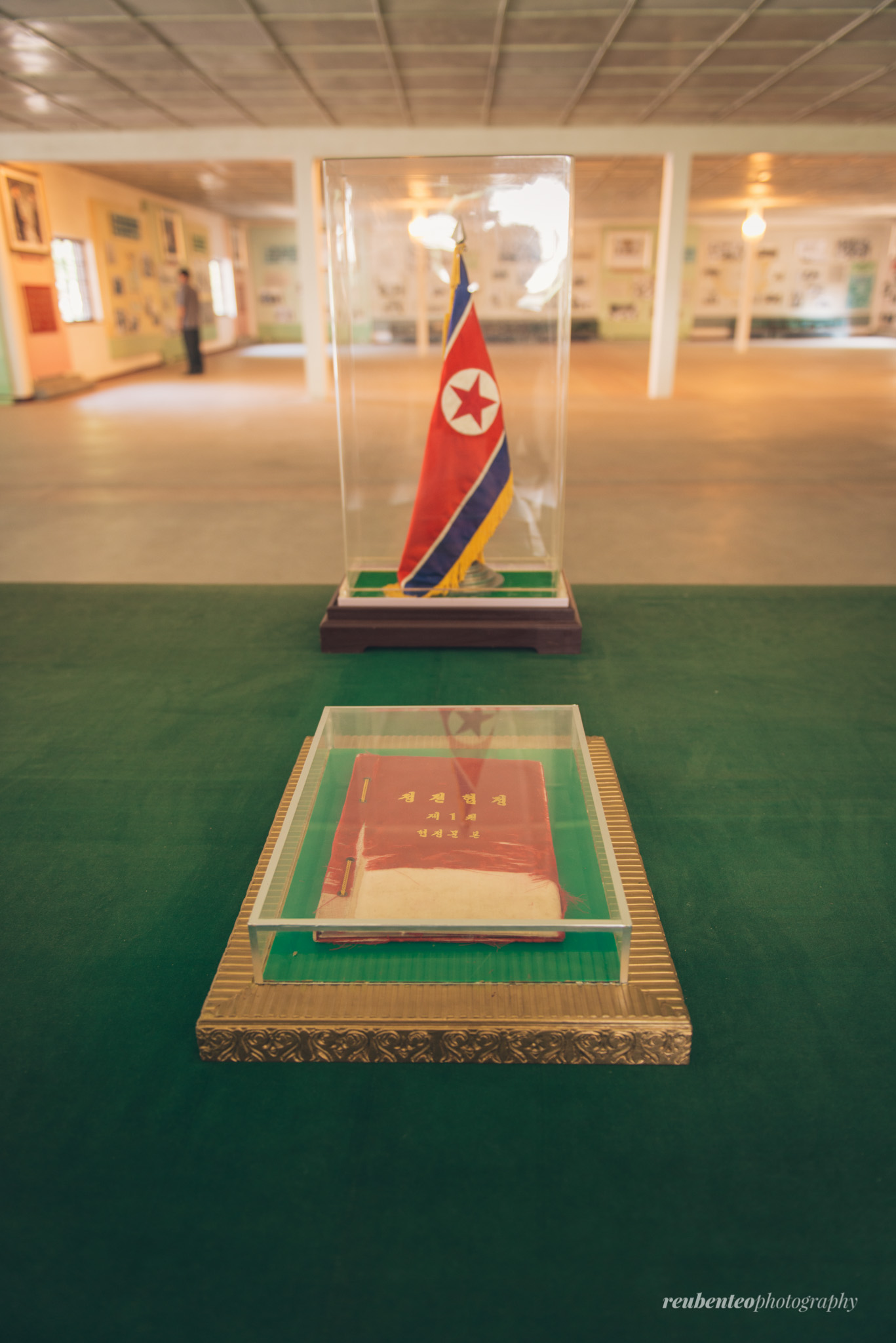 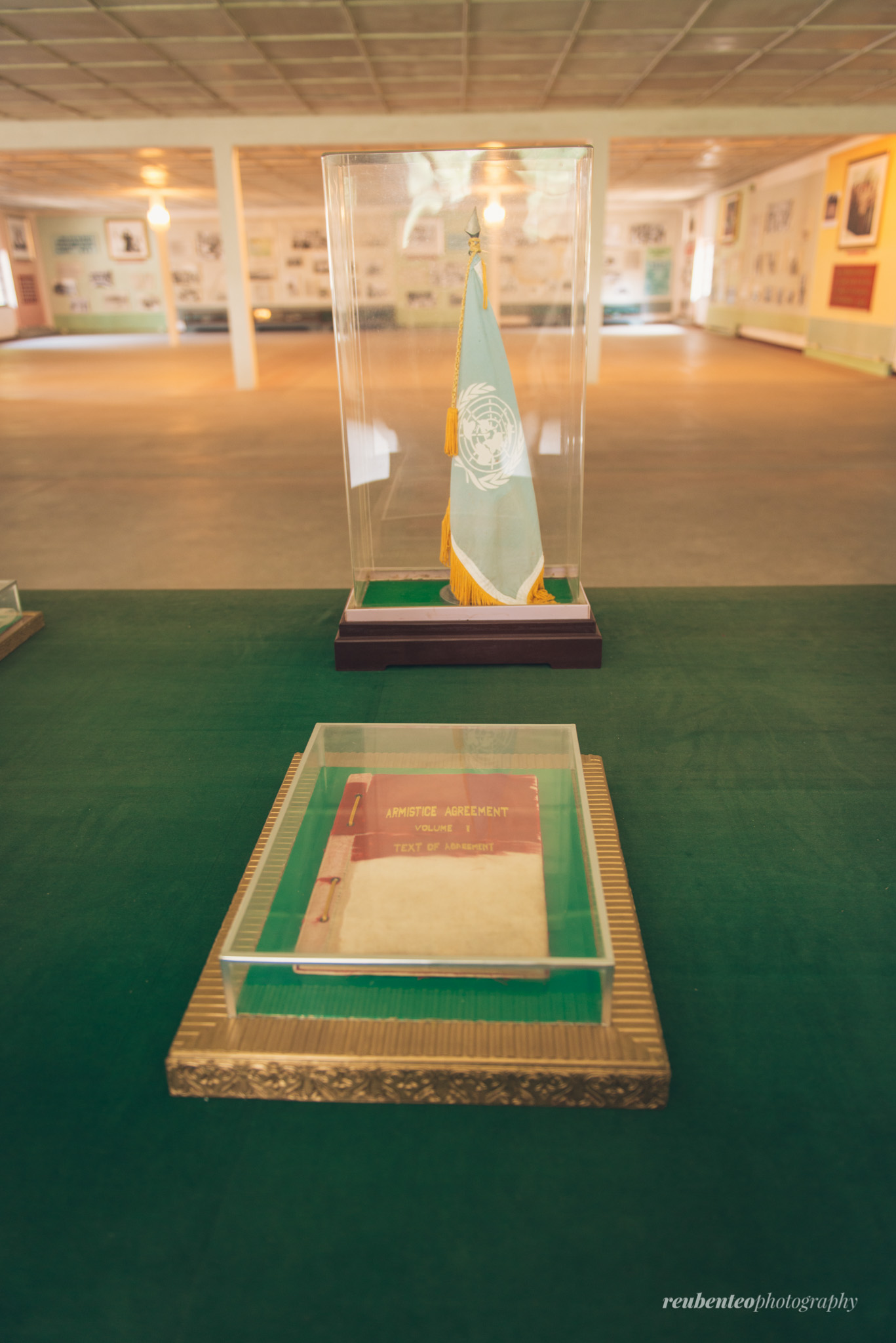 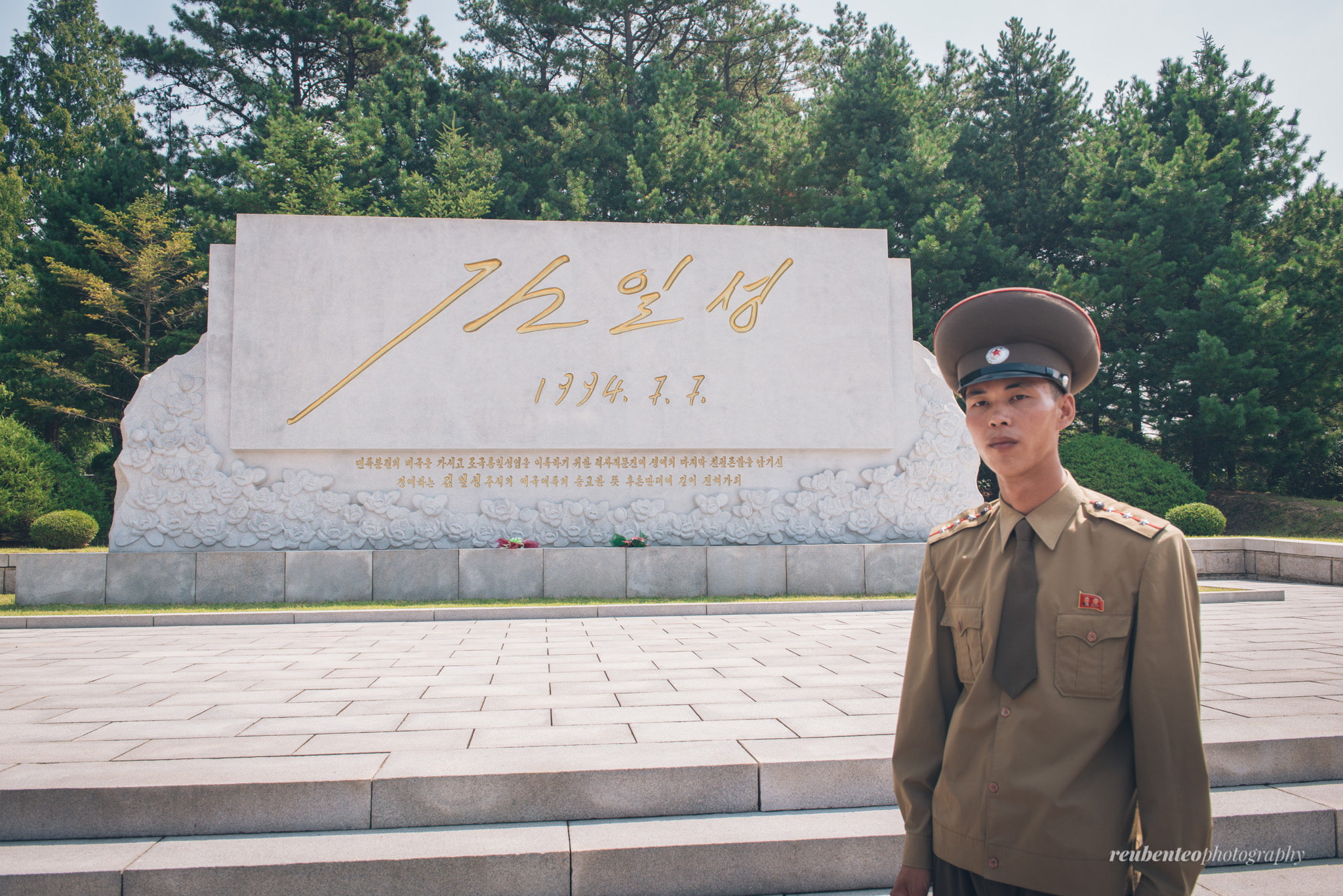 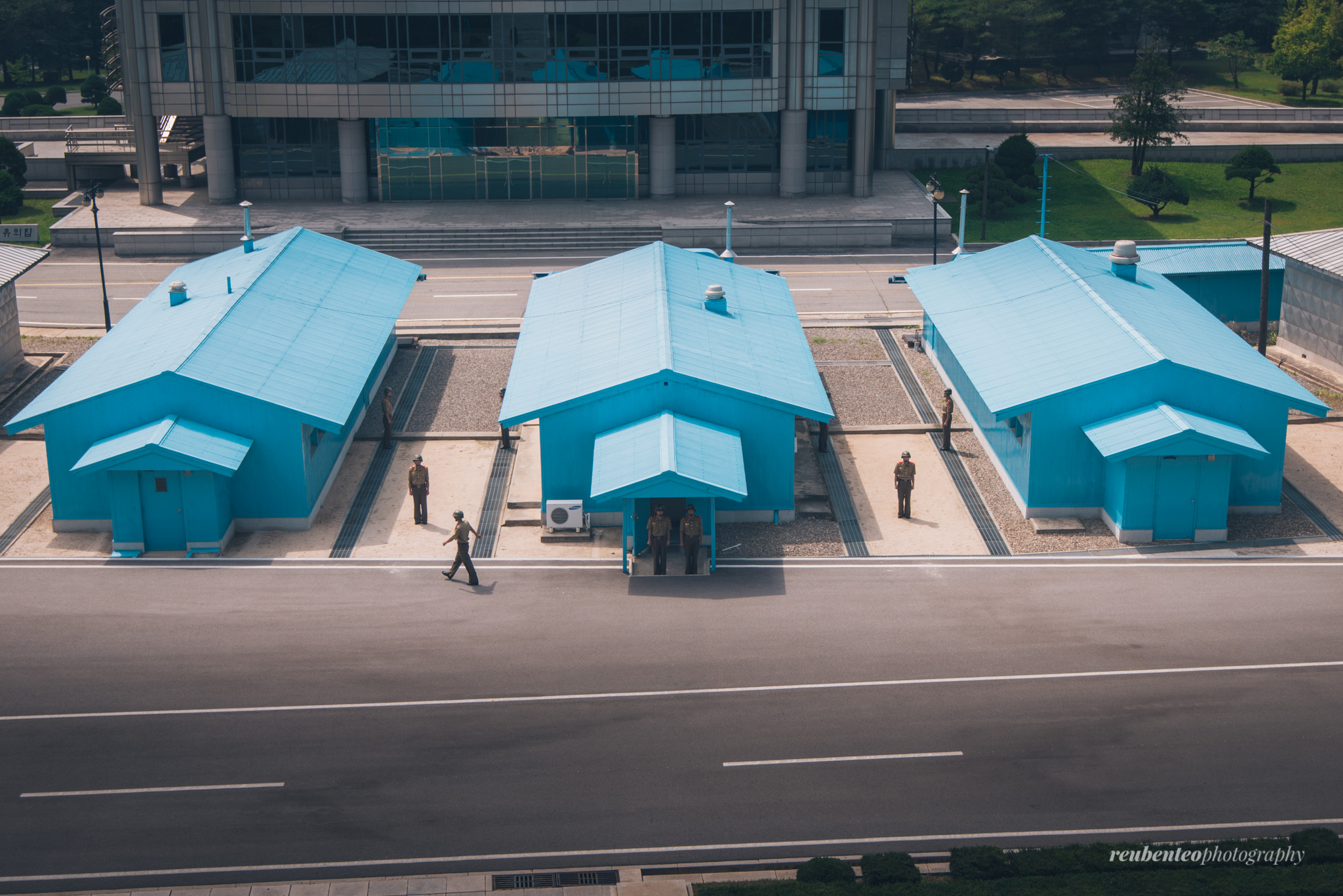 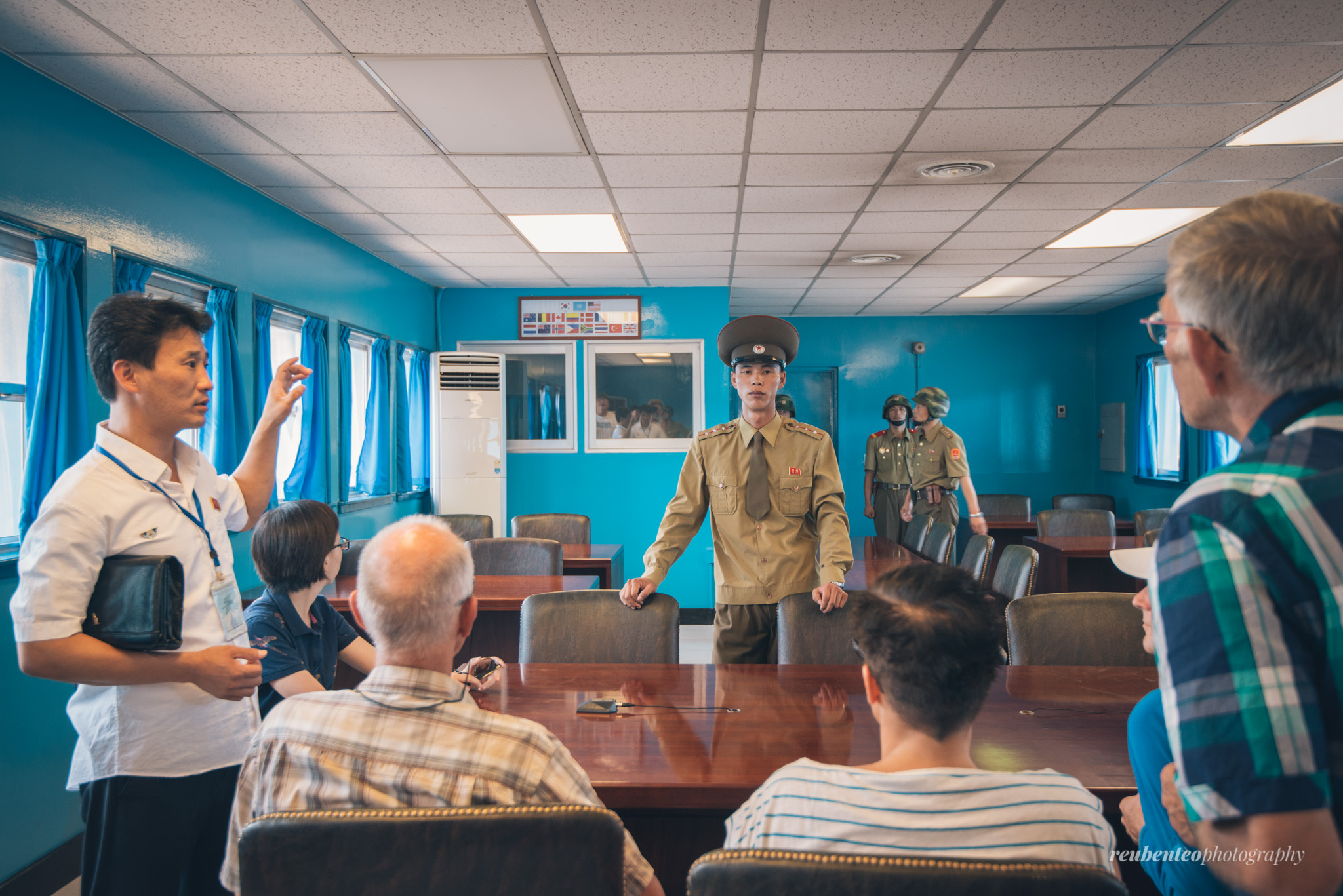 Briefing inside the center blue building 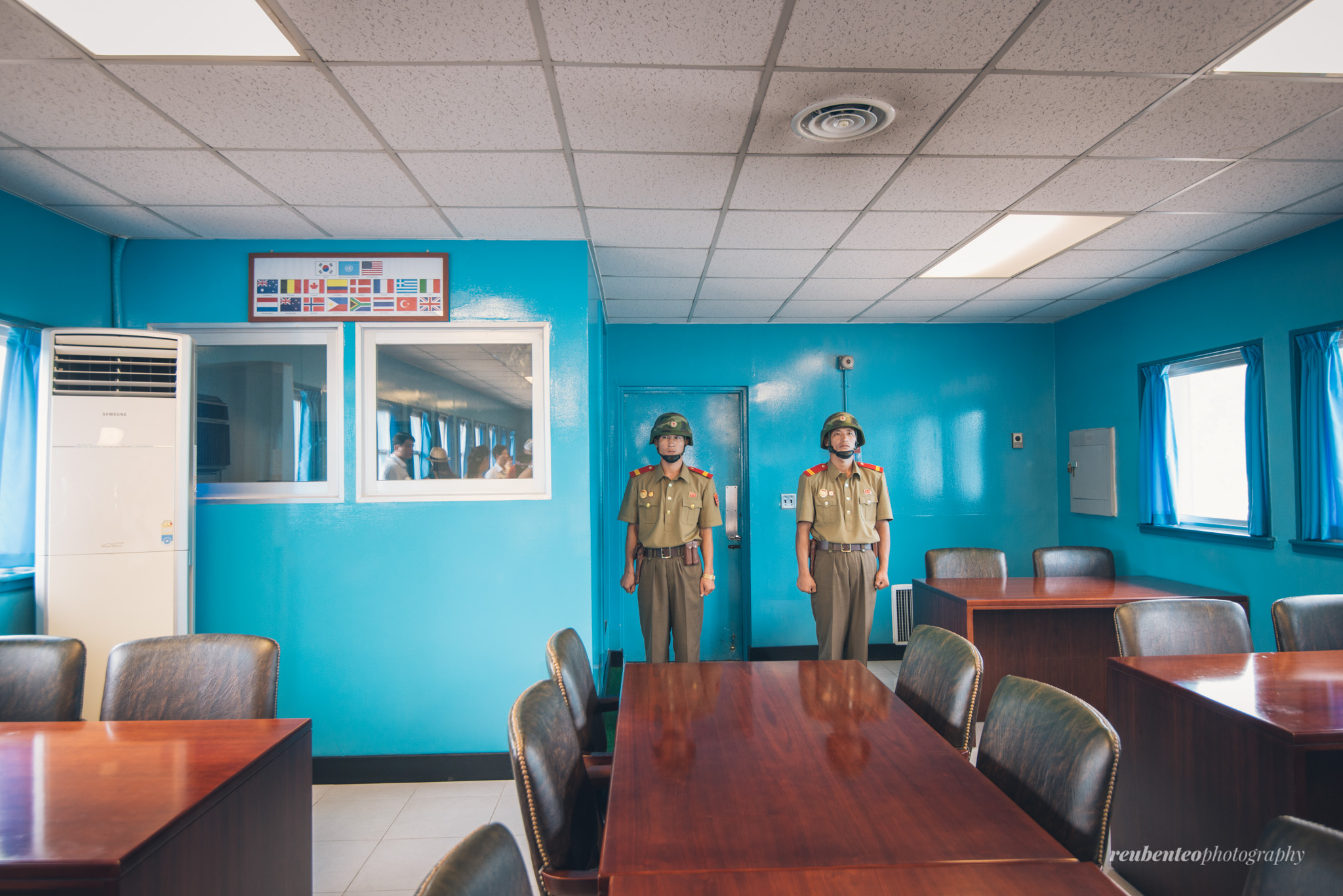 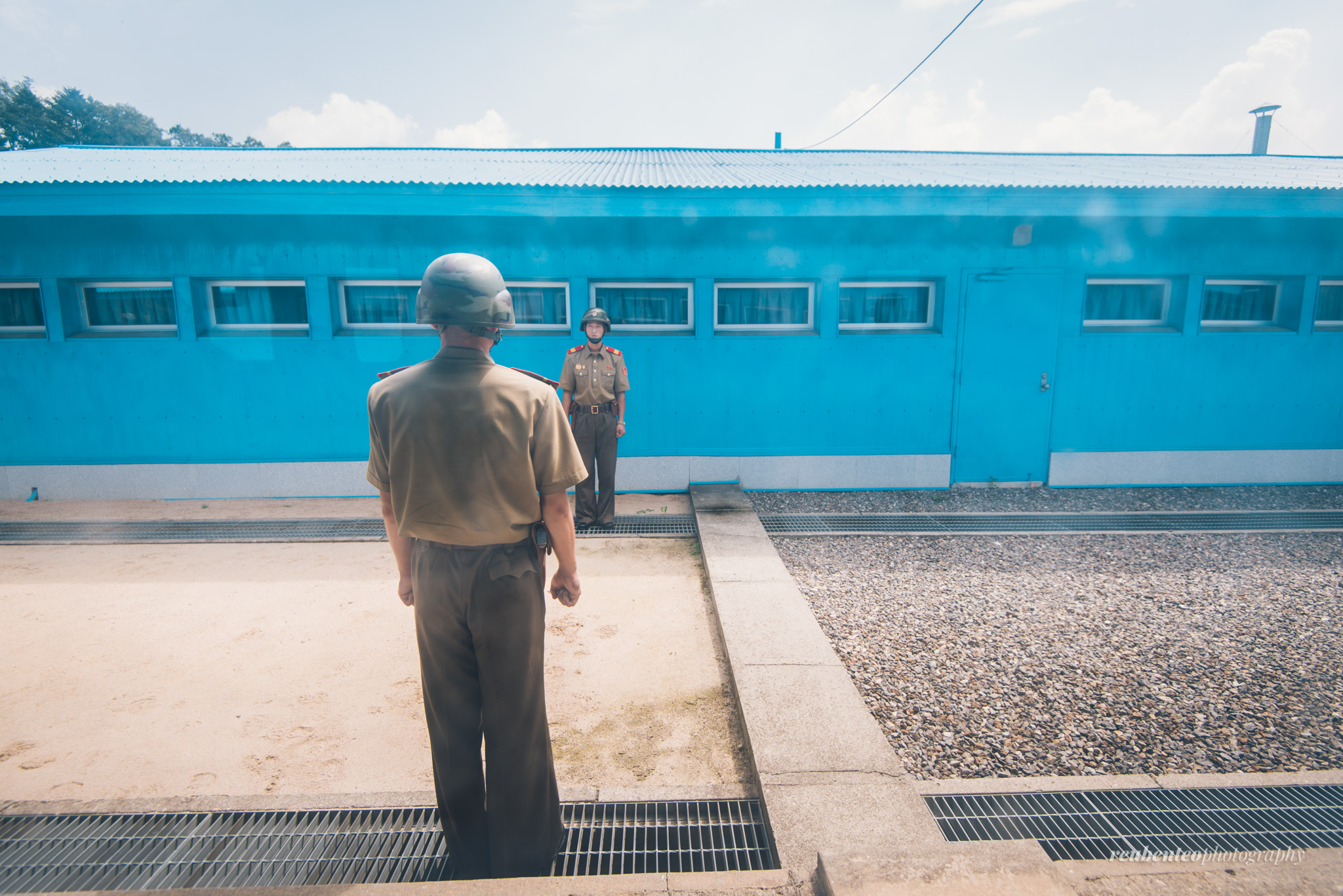 The concrete line that divides the two Koreas 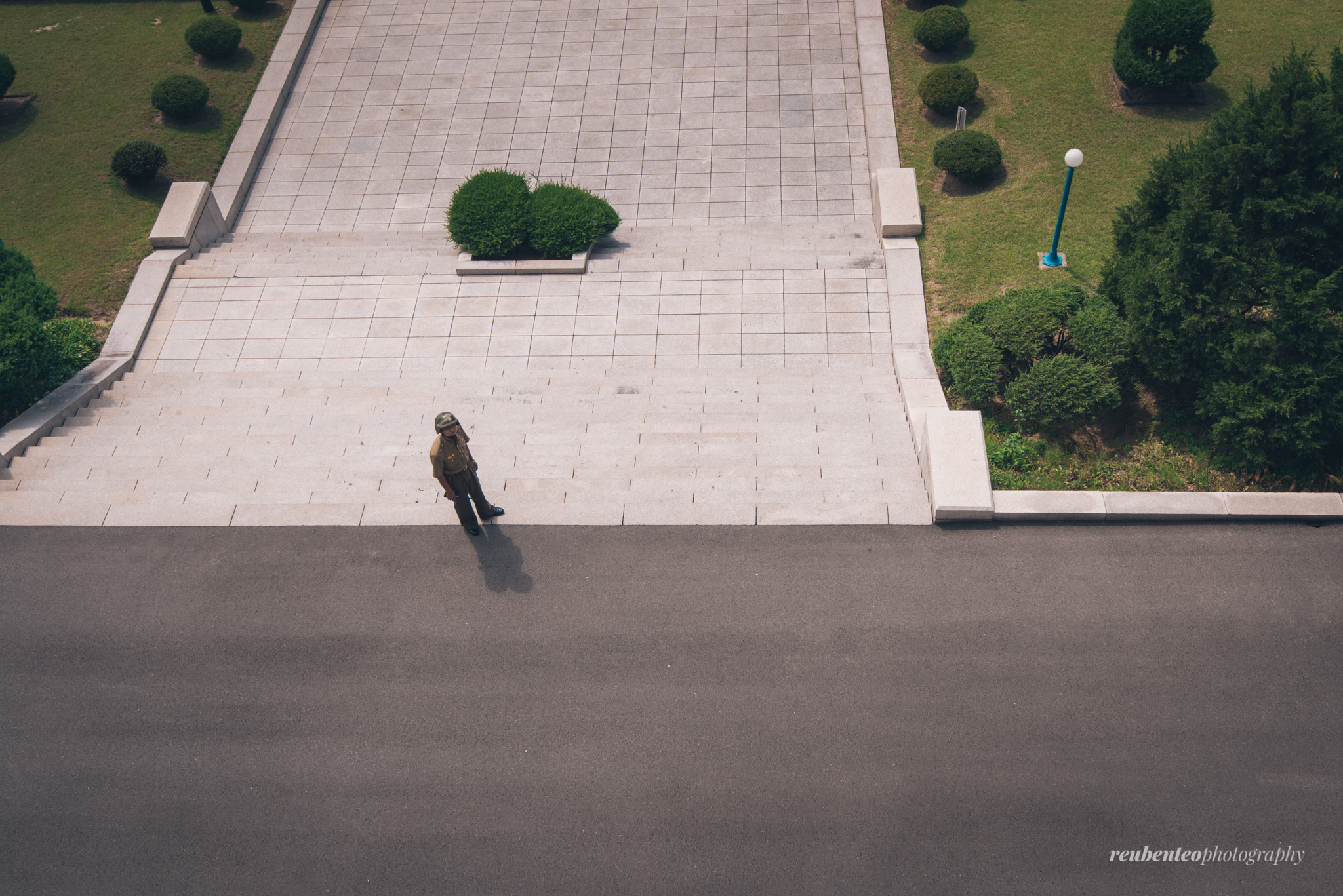 A guard staring at me from below 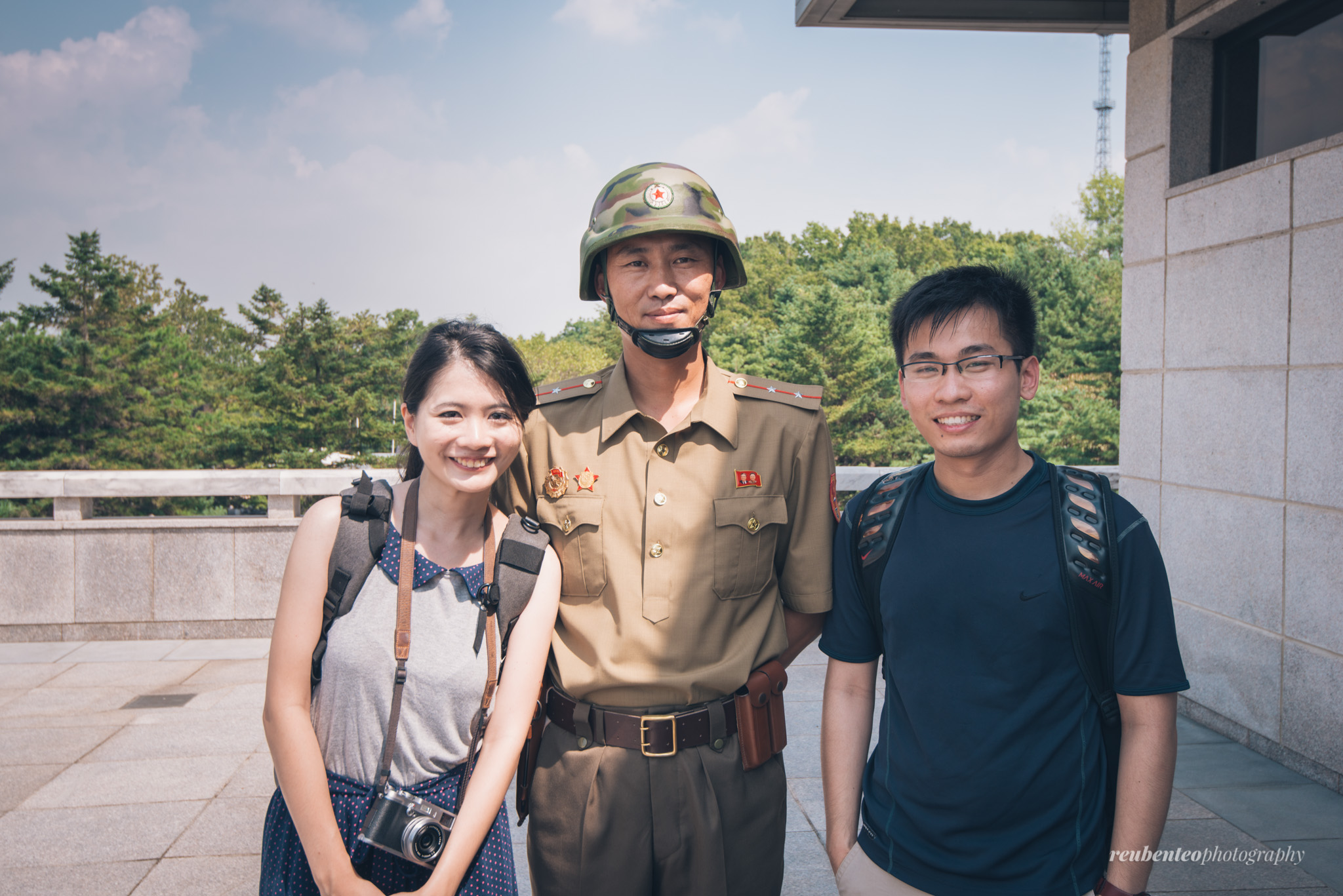 Photo with our bodyguard