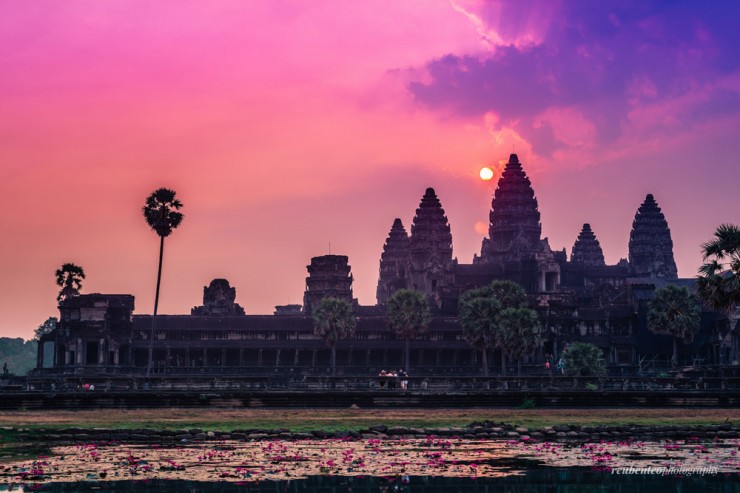 I’ll start off with the most famous, most beautiful and largest temple here in Angkor City. For those who are still unaware, Angkor Wat is in fact referred to this particular temple complex and does not refer to the entire city of Angkor. Built during the early years of the 12th century by Suryavaram II, it was constructed to honour the Hindu God Vishnu and is a symbolic representation of Hindu cosmology. The name ‘Angkor Wat‘ is actually it’s modern name, which literally means ‘City of Temples’. Curiously, the original name of the temple remains unknown. Historians have not been able to locate any artifacts or inscriptions that refer to the temple complex by name.

What’s rather impressive is that Angkor Wat itself is the largest religious structure in the world. The temple is designed to represent the mythical Mount Meru. Angkor Wat, forming a rectangle of about 1,500m by 1,300m, covers an area – including its perfectly squared 190 metre wide moats – of nearly 200 hectares. The external enclosure wall defines an expanse of 1,025m by 800m (82 hectares). It is the largest monument of the Angkor group.

In medieval Europe, it took centuries to build cathedrals, in particular the Cologne Cathedral (300 times smaller than Angkor Wat) was required 600 years to build. But the 200-hectare Angkor Wat complex was impressively built in less than 40 years.

Unlike most Angkorian temples, Angkor Wat is unusually oriented to the west, a direction typically associated with death in Hindu culture. Archaeologists and scholars disagree as to why the ancient builders chose to deviate from the ‘norm’ at the time. But most scholars believe that the temple was in fact a funerary temple, and the only one built during the life of the founding king – Suryavarman II – for his consecration, and probably also as a depository for his ashes.

Due to the lack of records and historical facts, many historians and archeologists find it difficult to give it a solid conclusion of it’s purpose, it’s name, how it’s actually built, and more. Angkor Wat has been shrouded in mystery for centuries but one thing is for sure, it was built to stay. Angkor Wat is also the symbol of Cambodia and its silhouette sits firmly on their national flag. It is visited by more than 2 million people a year and that itself is a magnificent feat as well.

Angkor Wat is also famous for it’s spectacular sunrise. Because it faces West, the main towers sit right in the pathway of the rising sun. The sun rise is most beautiful during the dry season when there are lesser clouds to cover the sun. Now, the trick here is to wake up extremely early in order to find your right spot and stay there til the sun is up. You have no idea how many people will crowd the most photogenic spot every single day. We woke up at the wee hours of 4:00am sharp and left for Angkor Wat while it’s still dark. The complex was massive and after showing the guards our passes, we walked straight into Angkor Wat’s rainbow bridge and across the moat. We were in total darkness and good thing our beloved guide guided us along the way to our spot. There were no lights within the areas of Angkor Wat and we could hardly see anything in the dark except the extremely dimmed silhouette outlines of the temple. The feeling of walking into Angkor Wat at that hour feels extraordinary. There were no people around and you can squint your eyes and try to get a glimpse of the temple. 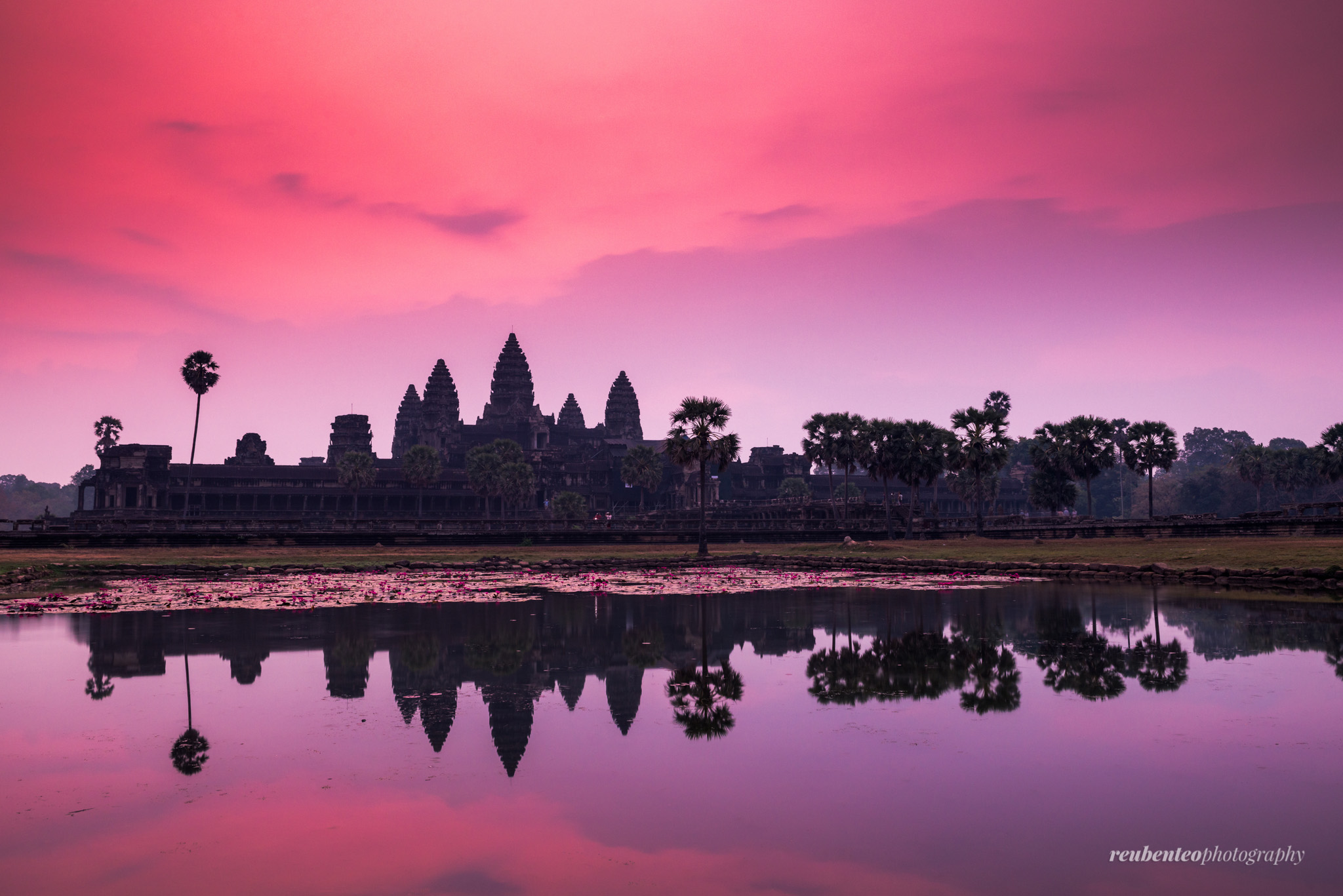 The peaceful and quiet temple during the twilight hours

We reached our spot that is on the left side of the water lily pond. I set up my camera equipment and tripod slowly with the help of my wife. We did a few test shots to try and get the composition and focus right because it was too dark to see anything through our eyes. We were totally isolated from the outside world. We were then accompanied by some mosquitoes. It would be great if you brought along some mosquito repellent if you find it annoying. What I love most about this hour before the sun rises, is that there is not a single person there to bother and spoil your shot. This allows me to paint a picture of a quiet, peaceful and extremely dreamy Angkot Wat.

After about an hour, we heard noises. The tourists are beginning to flock into Angkor Wat. Each of them equipped with extremely powerful torchlights that can reach the temple’s wall. Once they were here, my shots of a quiet and peaceful Angkor Wat disappeared. What annoyed me most were these group of aunties and uncles from China. I could recognise them from their accent and they were so loud that suddenly the entire vicinity of Angkor Wat felt like a market place. They held these powerful X-files torchlights that affected the lighting of my shots. But all was not lost, what came next was one of the most spectacular things I’ve seen in my life. The sun was rising. You can hear tons of camera shutter sounds and the crowd started to get a little bit aggressive. It was so crowded that I couldn’t move a muscle. There were no extra spaces for me to move at all. I was literally stuck in the same position for hours. It was crazy and my legs were getting numb. 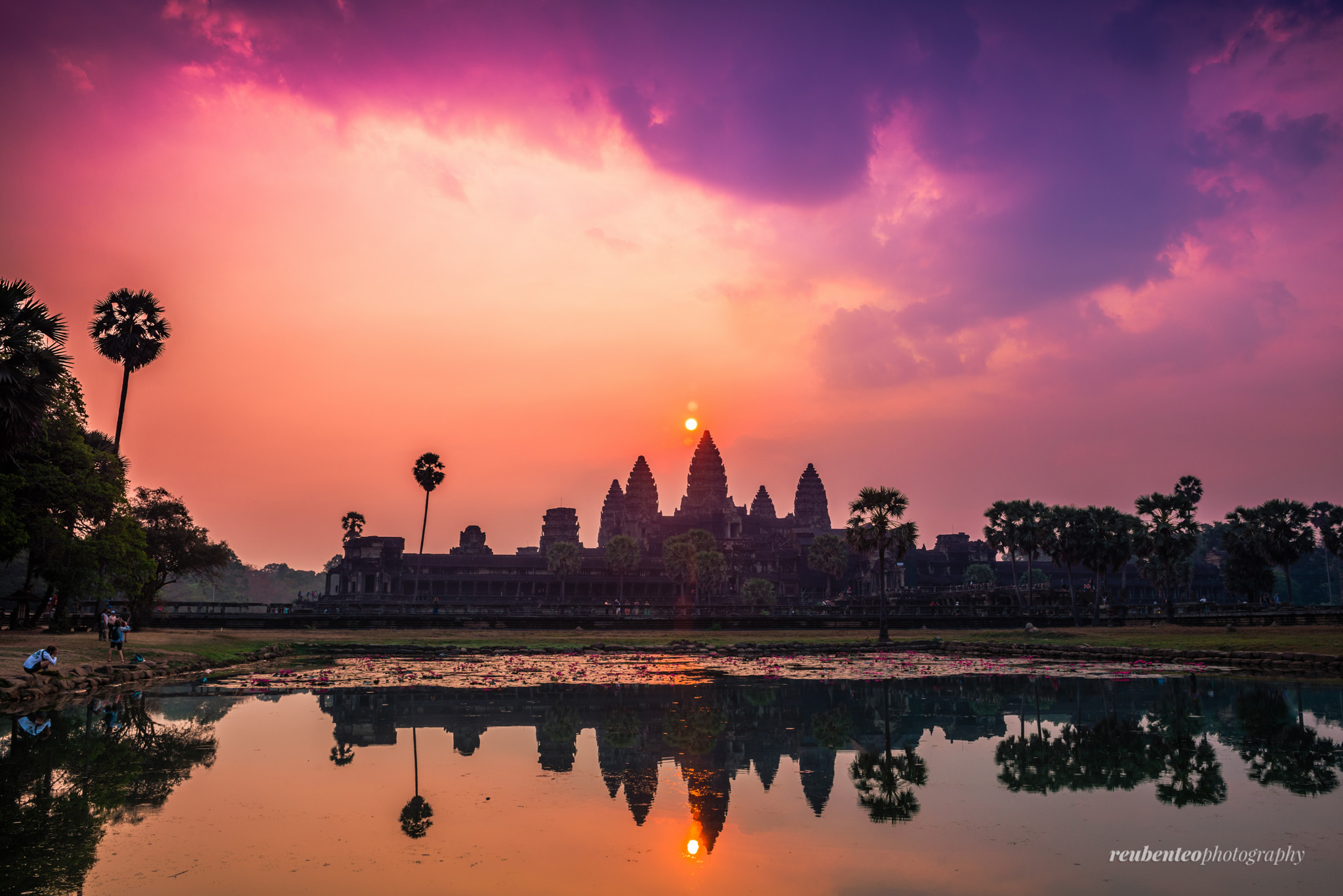 The awesome sunrise of Angkor Wat

Back Again on 3rd Day

On the third day of our visit to Siem Reap, we returned to Angkor Wat in the evening. We walked along their extremely long corridors and admire the details and effort that the ancient Angkorians have put into this temple. What amazes me most was that they stack all these giant blocks of sandstone together then only will they carved the temple out. Virtually all of its surfaces, columns, lintels even roofs are carved, so that means Angkor Wat is in fact a gigantic sculpture. I couldn’t imagine that humans could have accomplished this during ancient times in just 40 years. It’s just mind boggling. The sandstone used to construct this jewel, at least 5 million tons worth, had to be carried from a quarry 25 miles away at the Kulen mountains. 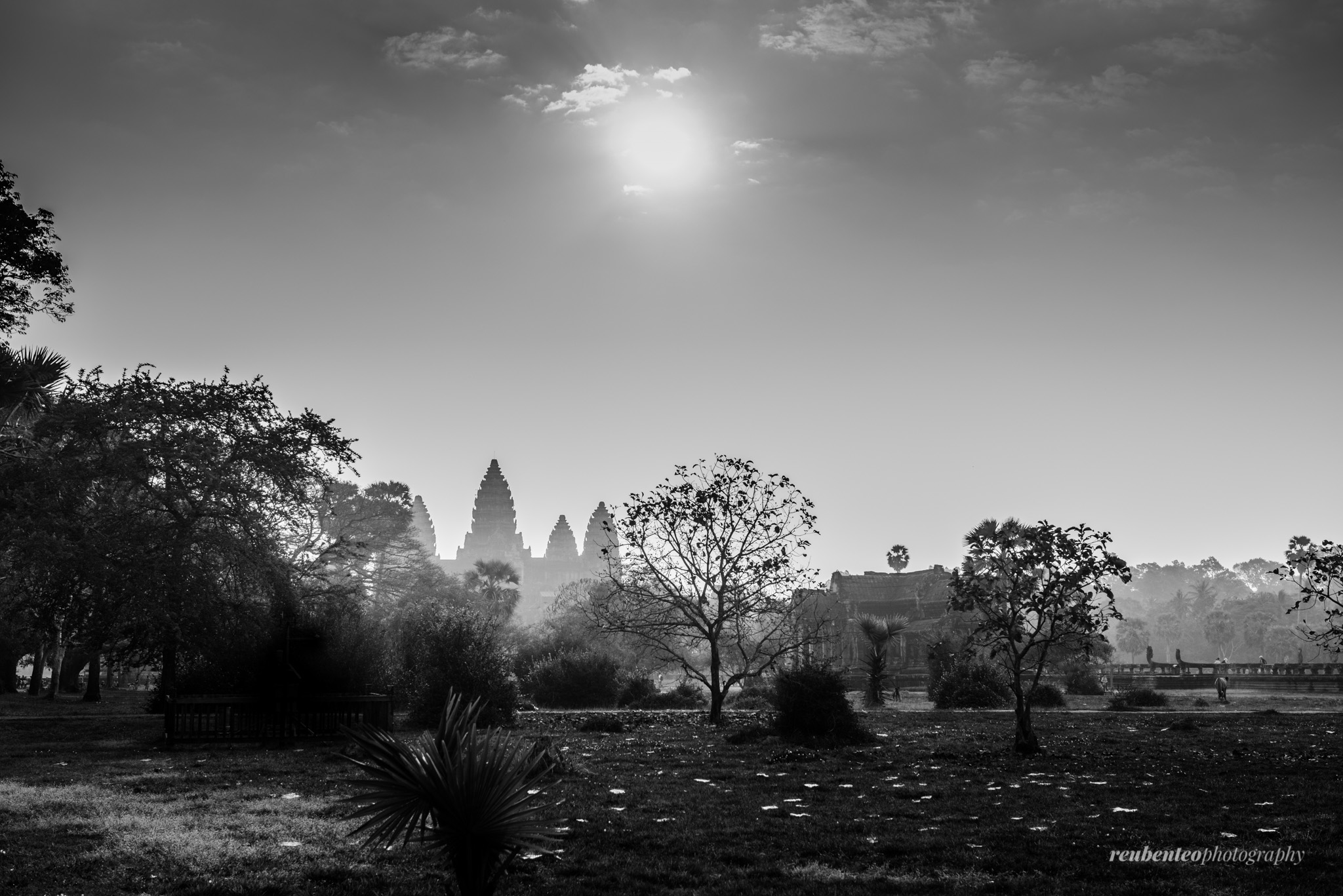 Angkor Wat in the distance 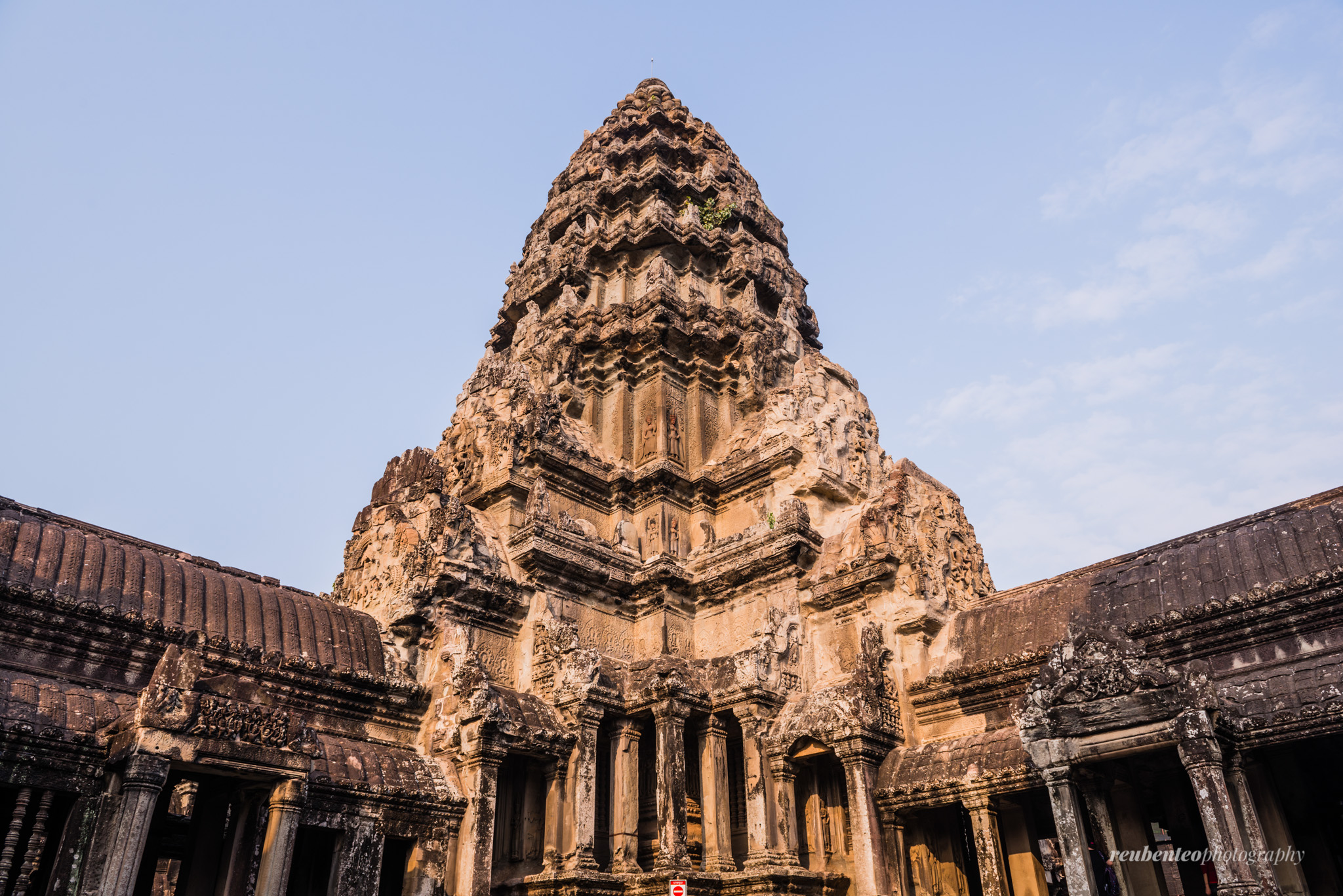 Browsing through their stone galleries, we then reached the central tower. As mentioned earlier, this temple was believed to be a funerary temple for the King. The archaeologist Charles Higham also describes a container which may have been a funerary jar which was recovered from this particular central tower. The seven circles of the central tower corresponded to the seven chains of the mountains of Mount Meru, the three terraces of the temple to the three platforms of earth, water and wind on which the cosmic mountain rests, and the water filled moat to the Ocean. Due to the fragile foundation of the tower, we had to queue up to climb up to the tower. The stairway up the tower was extremely steep and difficult to climb. It was believed that it was built intentionally to be this steep to symbolise that climbing to heaven is no easy task. Thanks to the temporary railings, we were able to slowly climb up the stairway to heaven without much worries.

The towers are designed to look like sprouting lotus buds, and at one time they may have been covered in gold. Throughout the temple complex, carvings and sculptures depict gods, battle scenes, dancers, events in Hindu mythology, and other images. Working in sandstone, a fairly soft material, made the construction project easier for the 5,000 artisans and 50,000 laborers who built the temple over a period of some three decades. 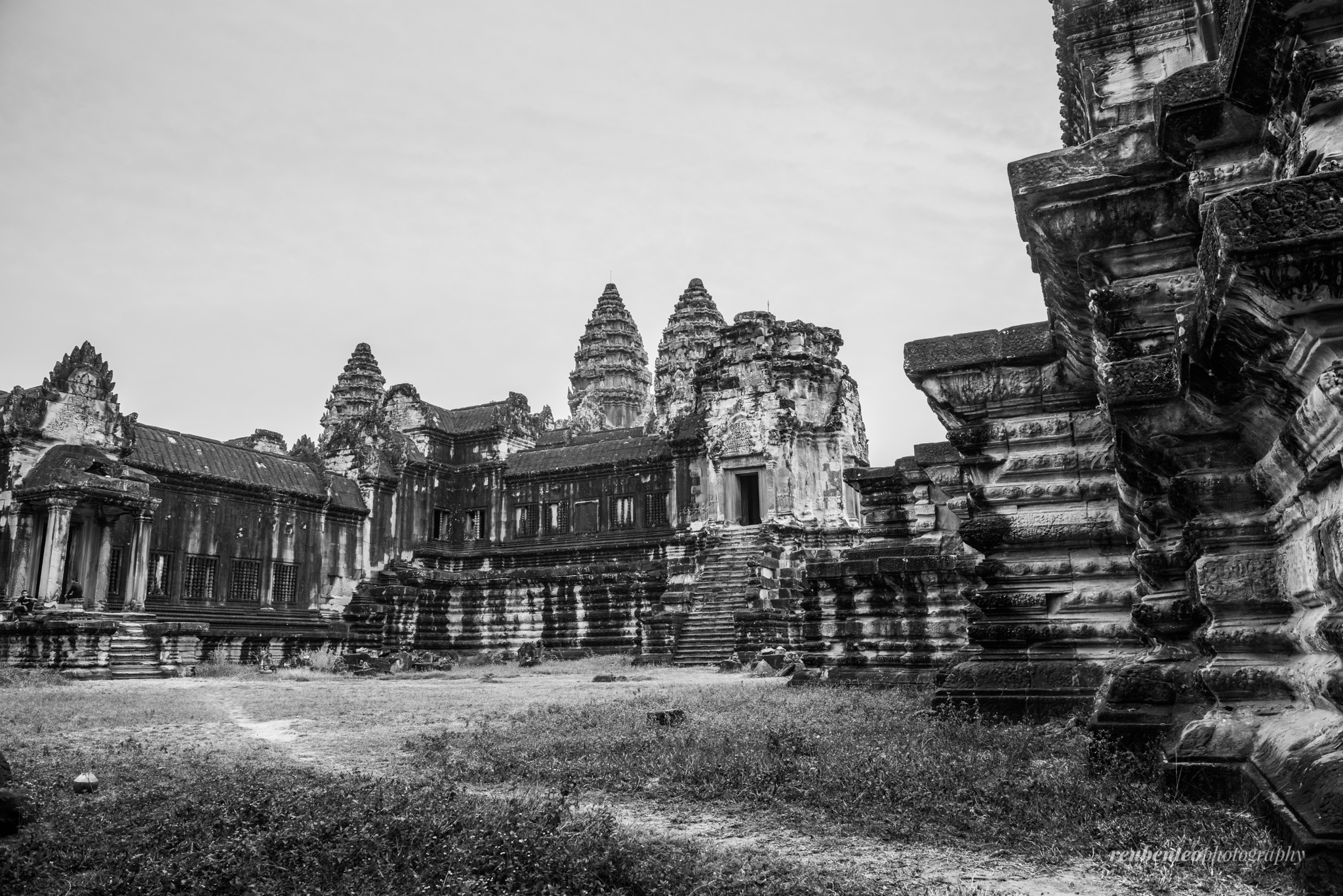 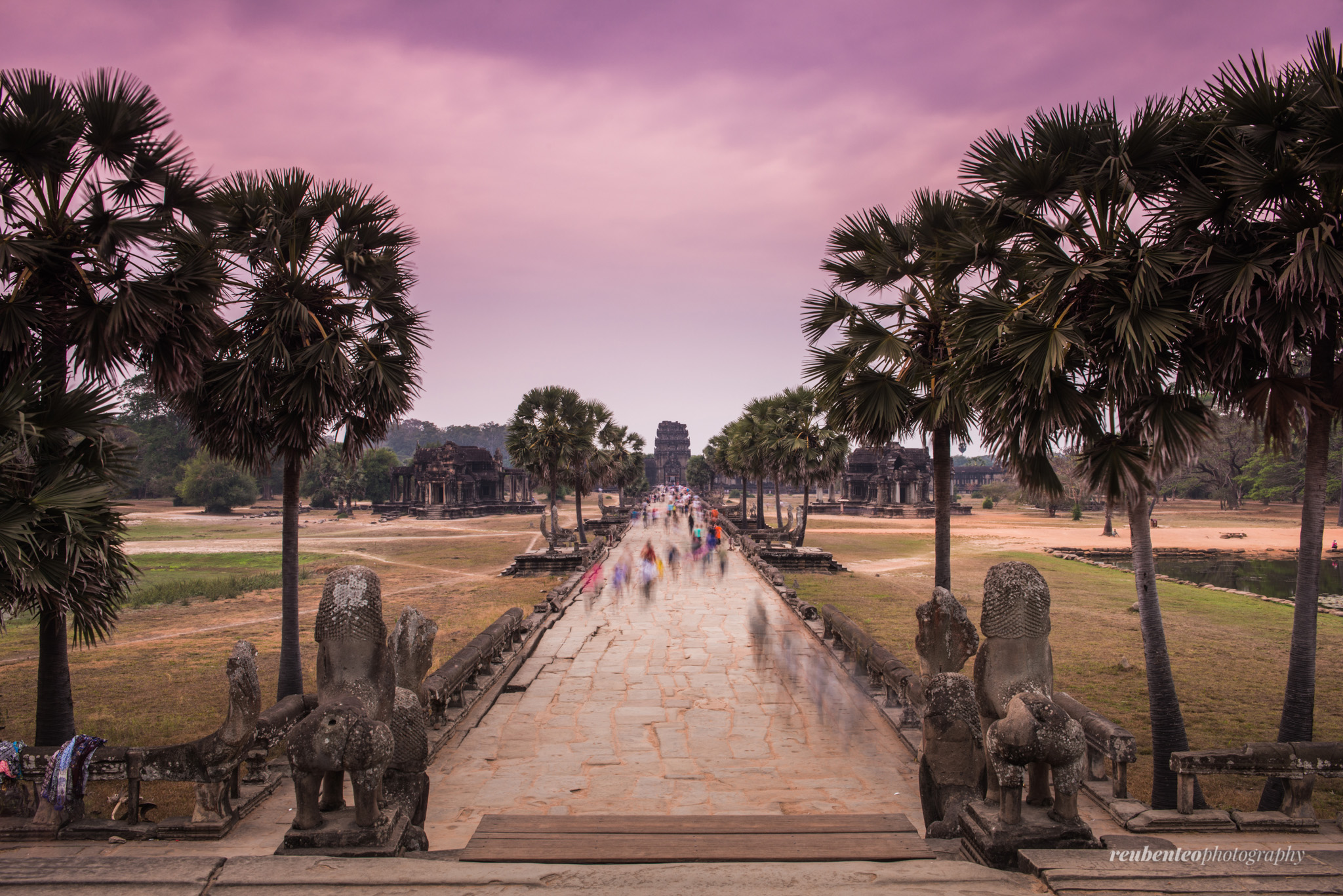 After visiting the central tower, it was almost time for sunset. There is no sunset view in Angkor Wat. We took some of our time slowly to check out parts of the temple grounds. The tourists were beginning to leave the temple. You have to leave Angkor Wat when the sun sets which is around 5pm. There will be guards chasing you out of the area. But we tried our best to turn around and try to get some shots of the temple before the sky turns dark. From the distance, we could see the guard shaking his head and trying to shoo us. It was indeed a spectacular experience to have walked around this ancient wonder. It is indeed one of the most beautiful structures ever build by man. I suggest that everyone should never miss it during their life time. An asian treasure it stands and a beauty it represents. Here are more of the photos from our Angkor Wat walk. Enjoy! 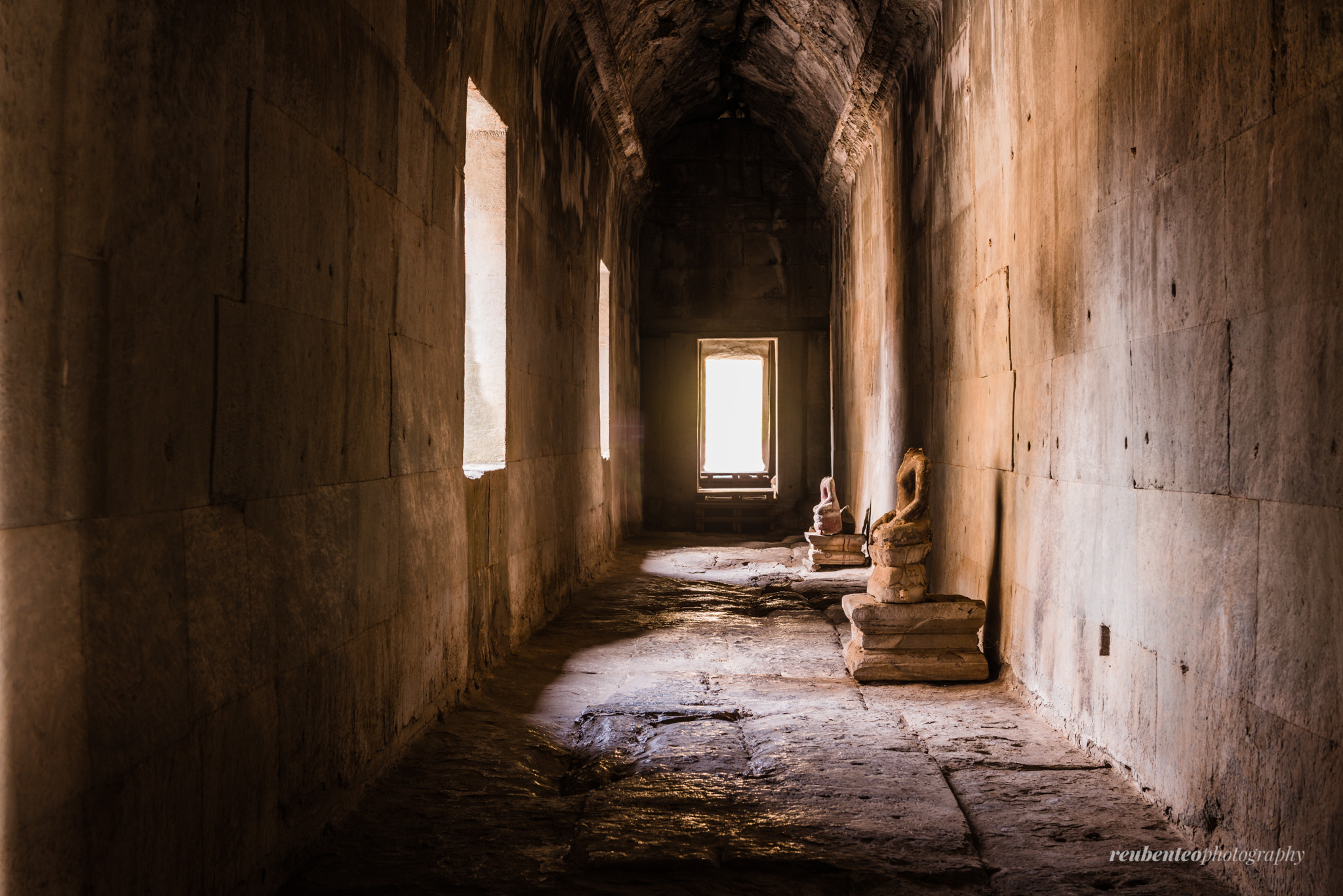 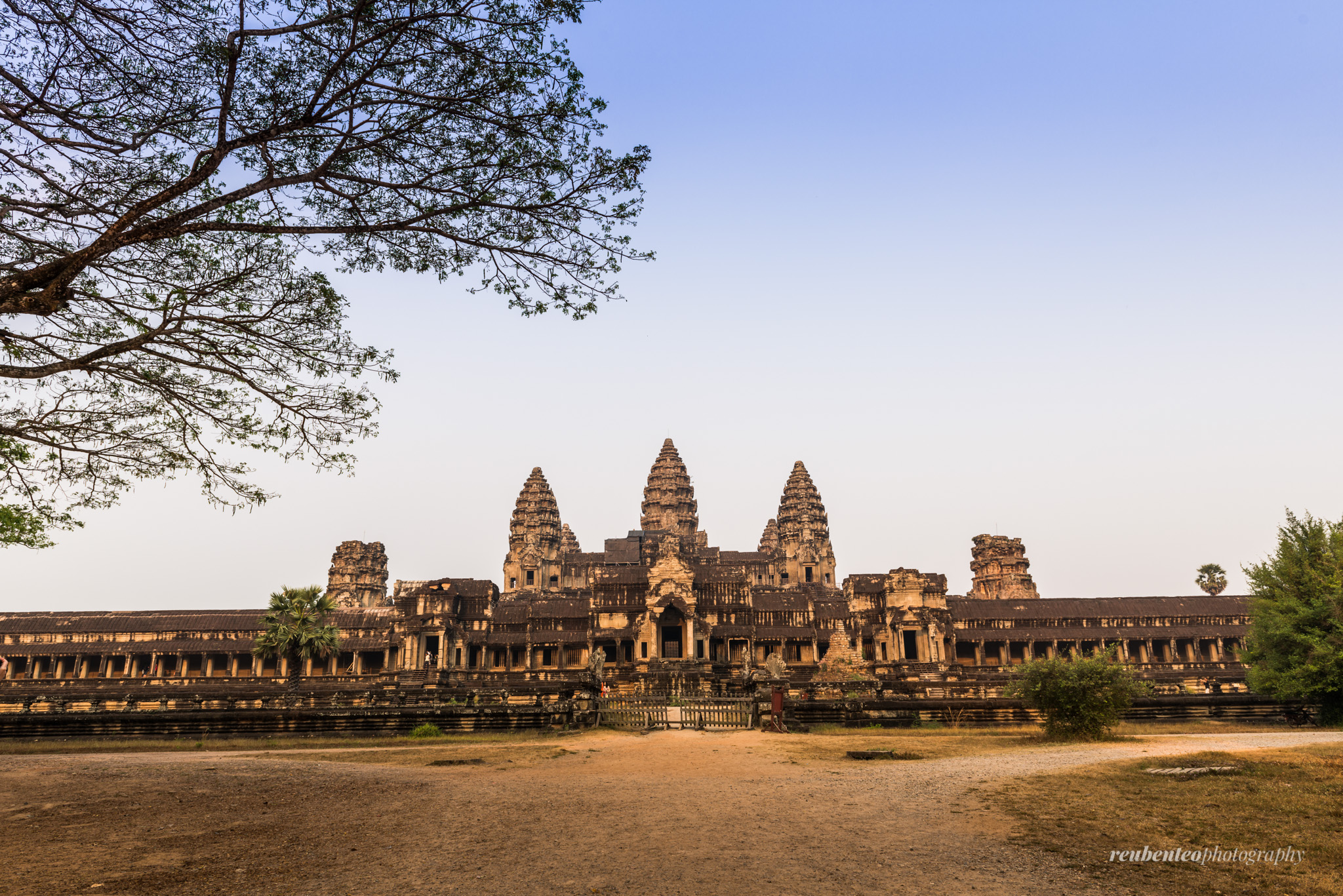 The East side of Angkor Wat. It is believed to be unfinished til this day. 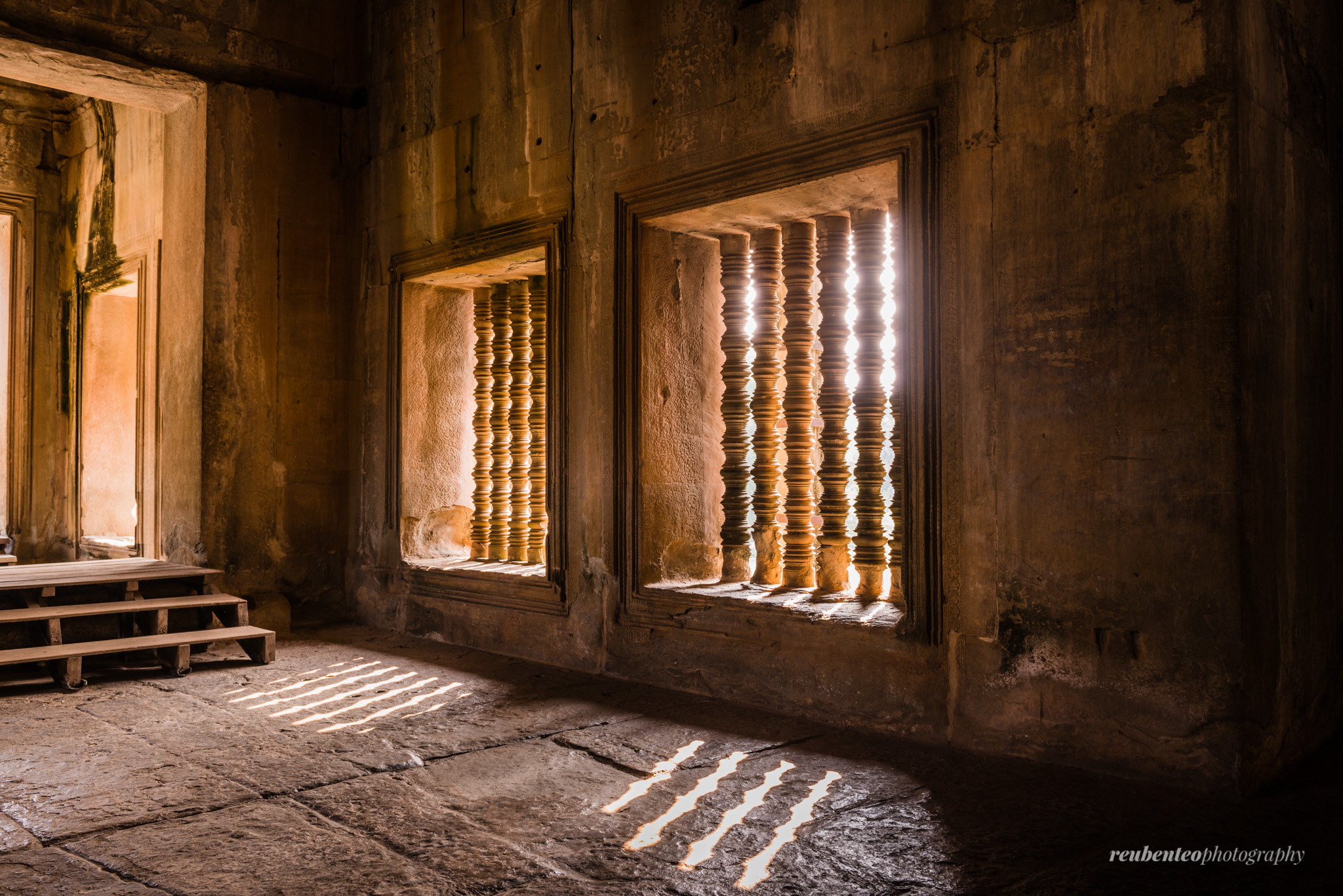 Decorative windows all carved out from the colossal stones stacked together. A true masterpiece. 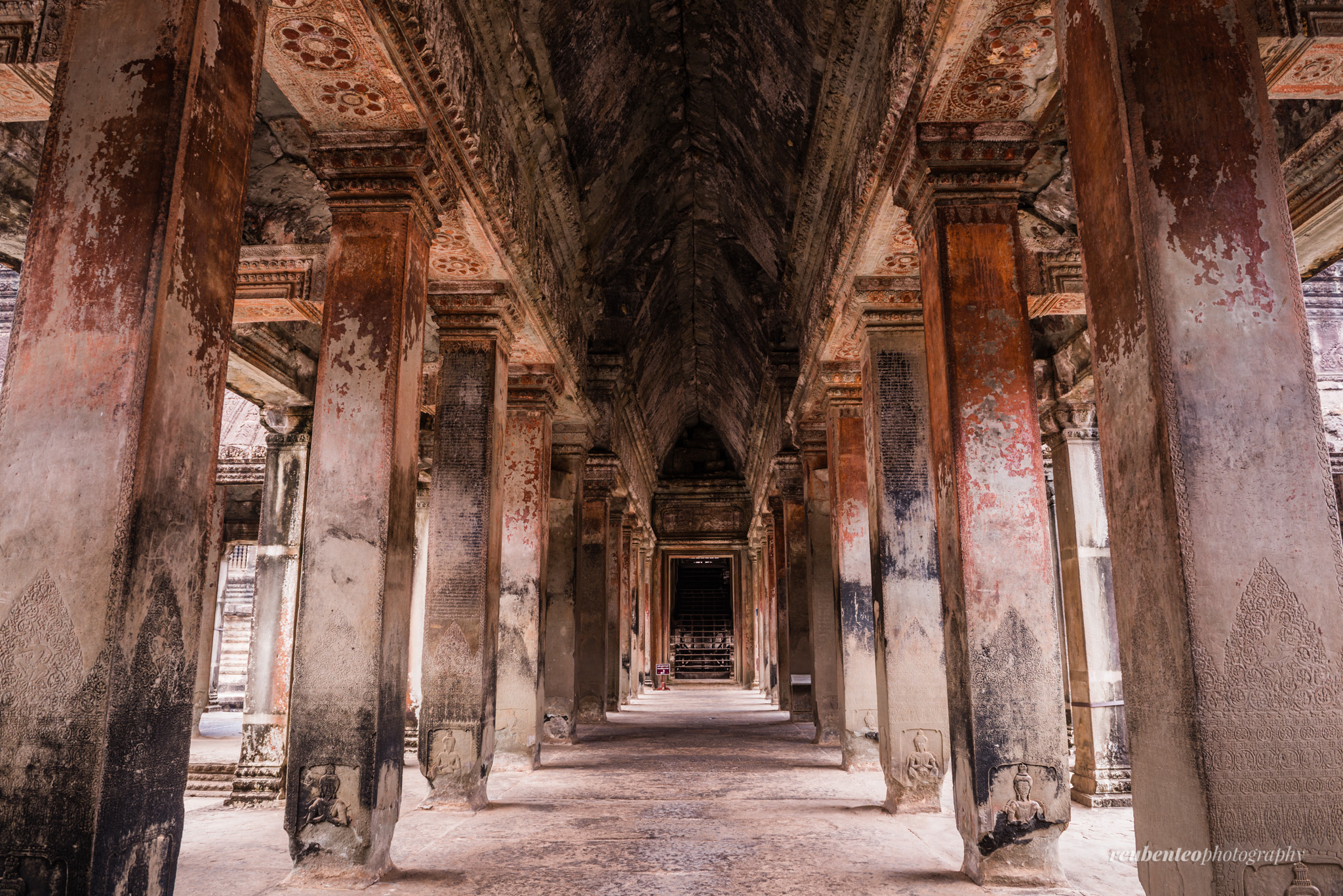 Notice all the detailed carvings on the pillars 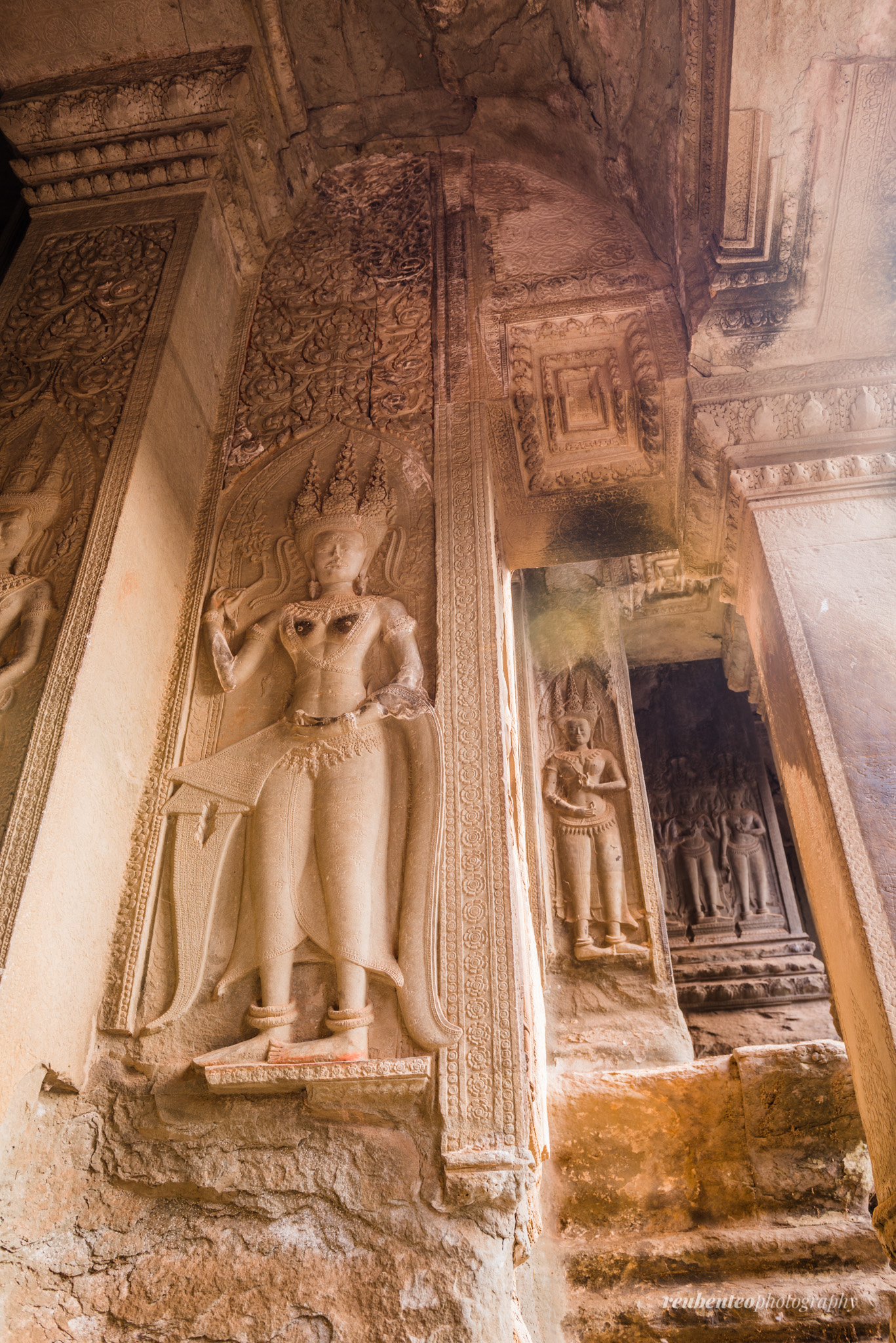 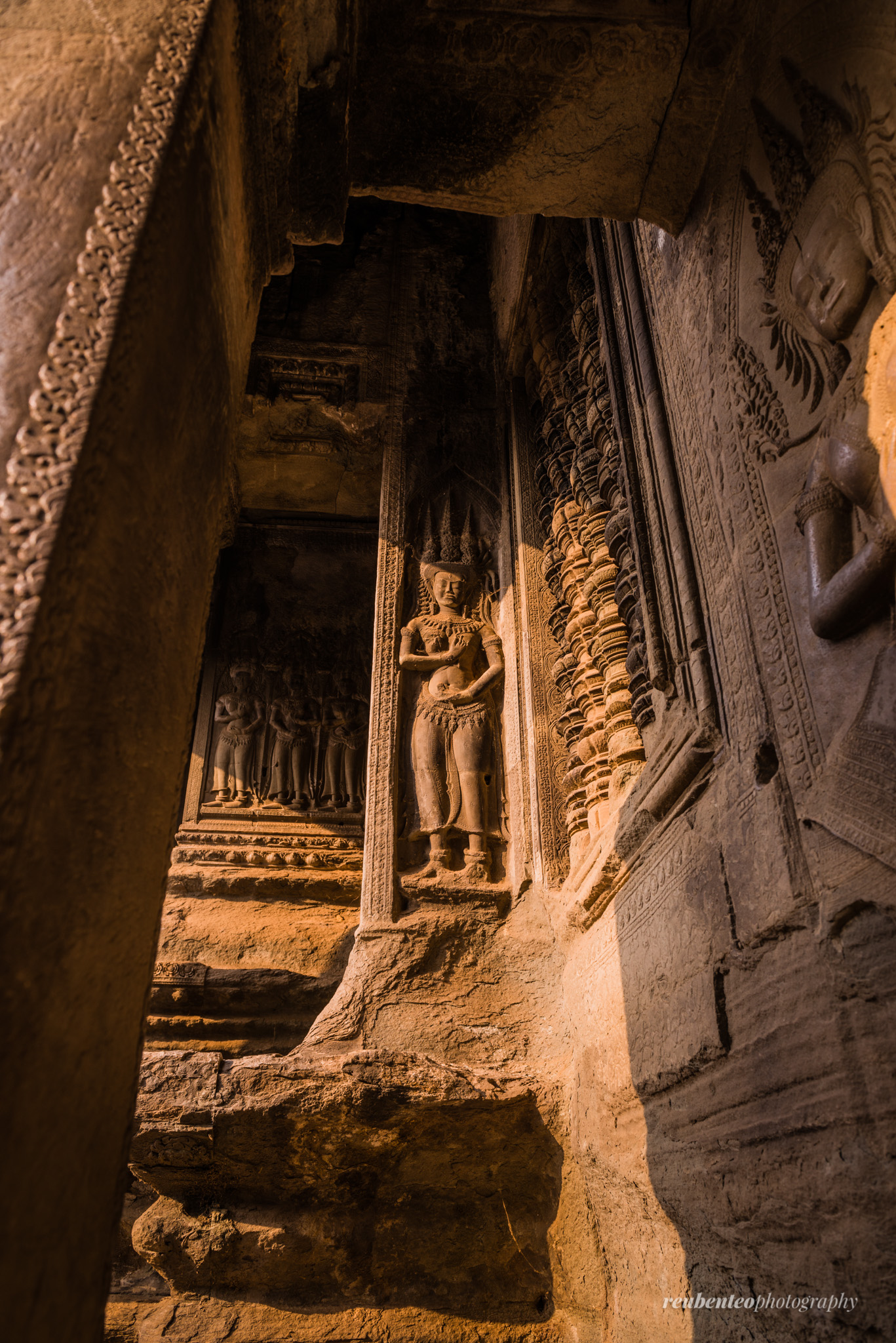 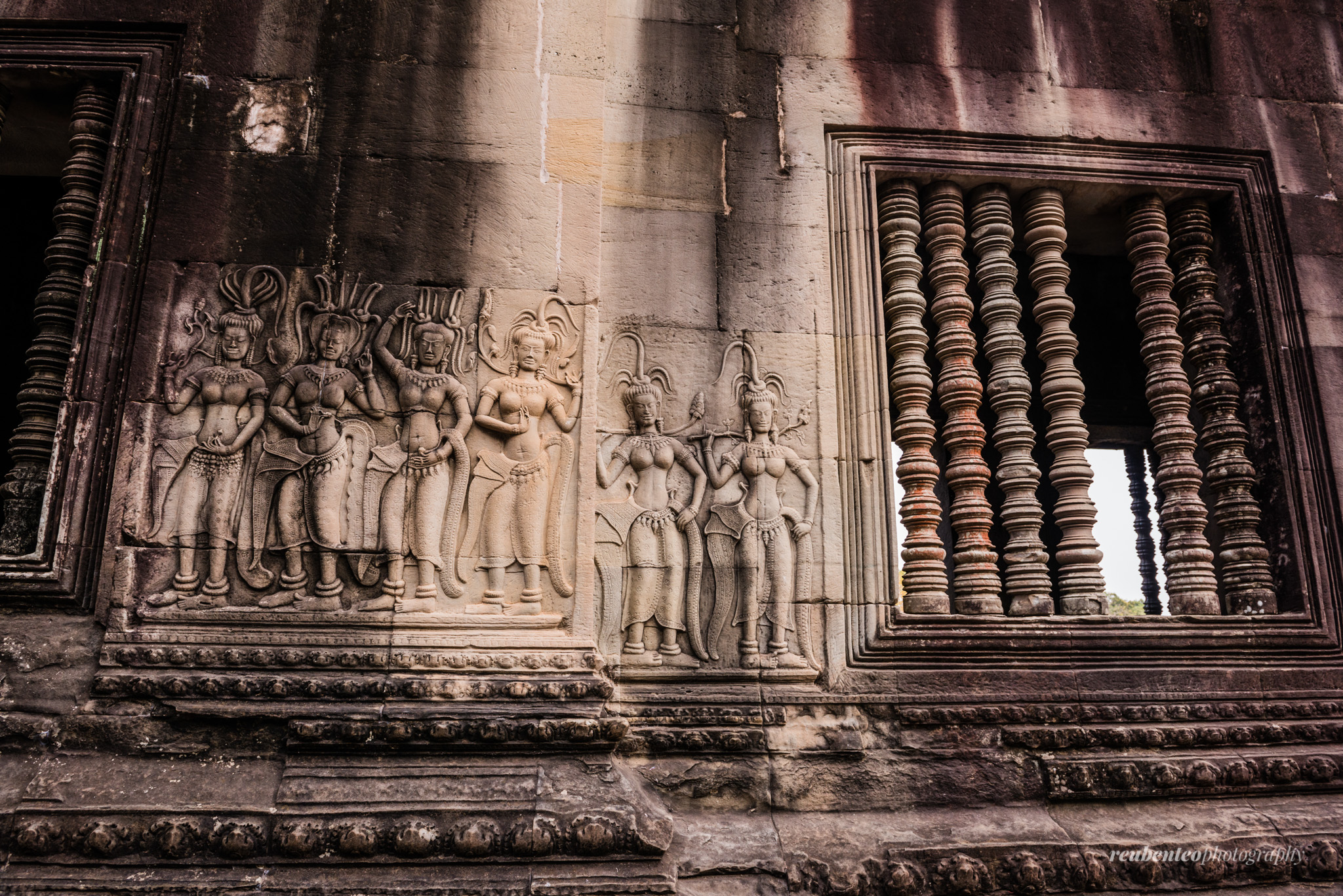 A group of Apsara dancers bas relief. An Apsara is a female spirit of the clouds and waters in Hindu and Buddhist mythology. 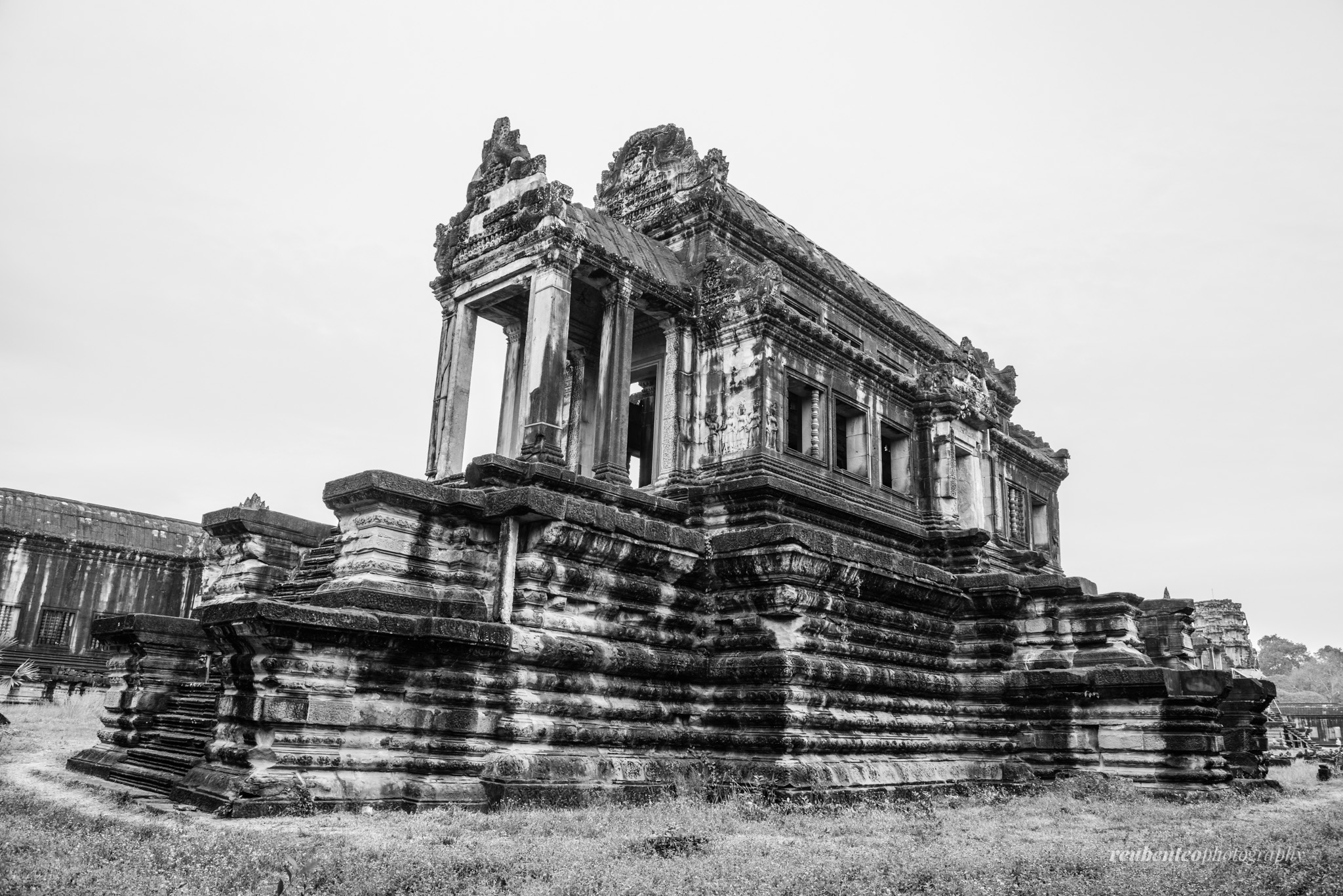 One of the libraries situated in front of the temple 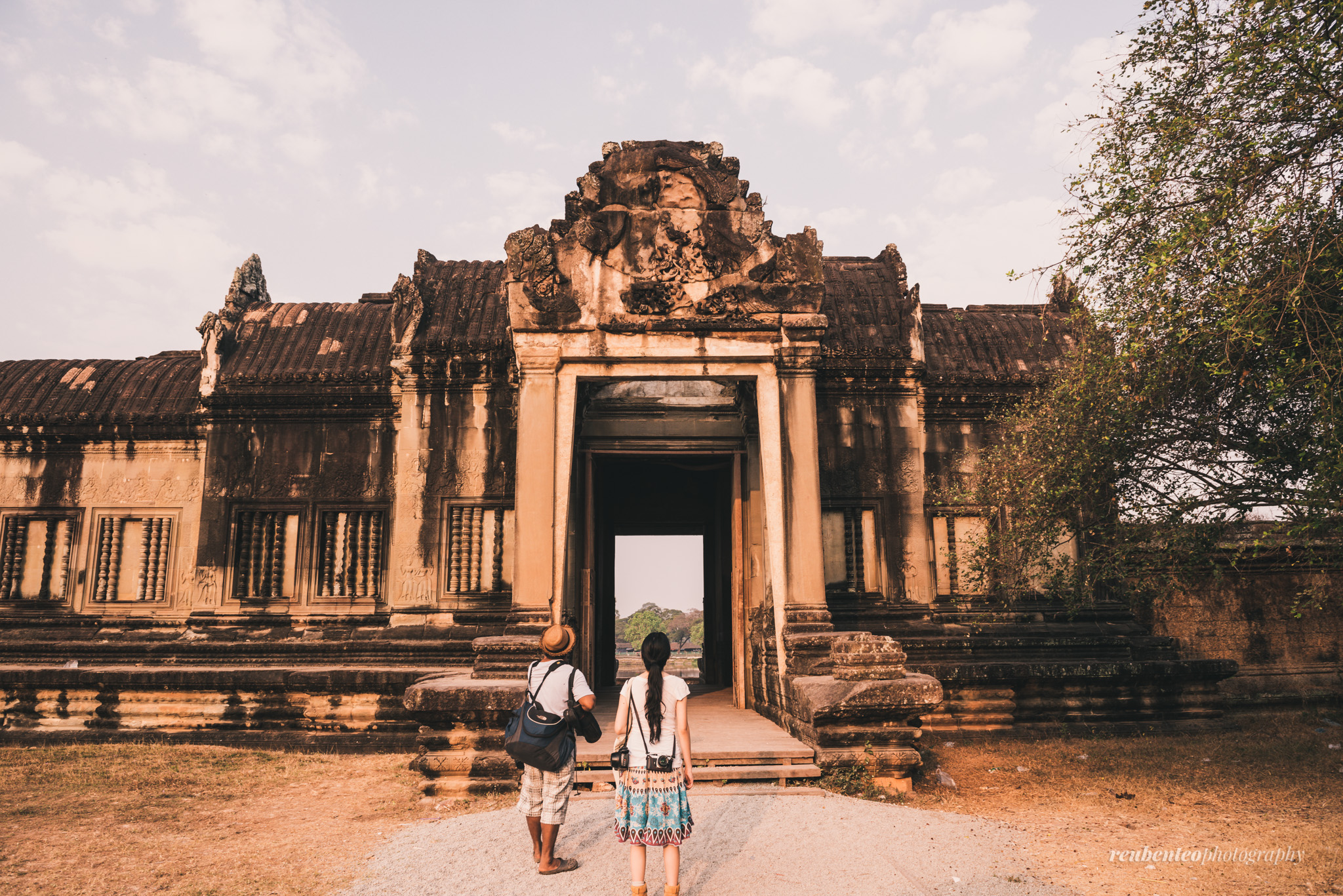 The elephant entrance. This gate is situated on the left side where the elephants pass through this gate and are parked at this area. 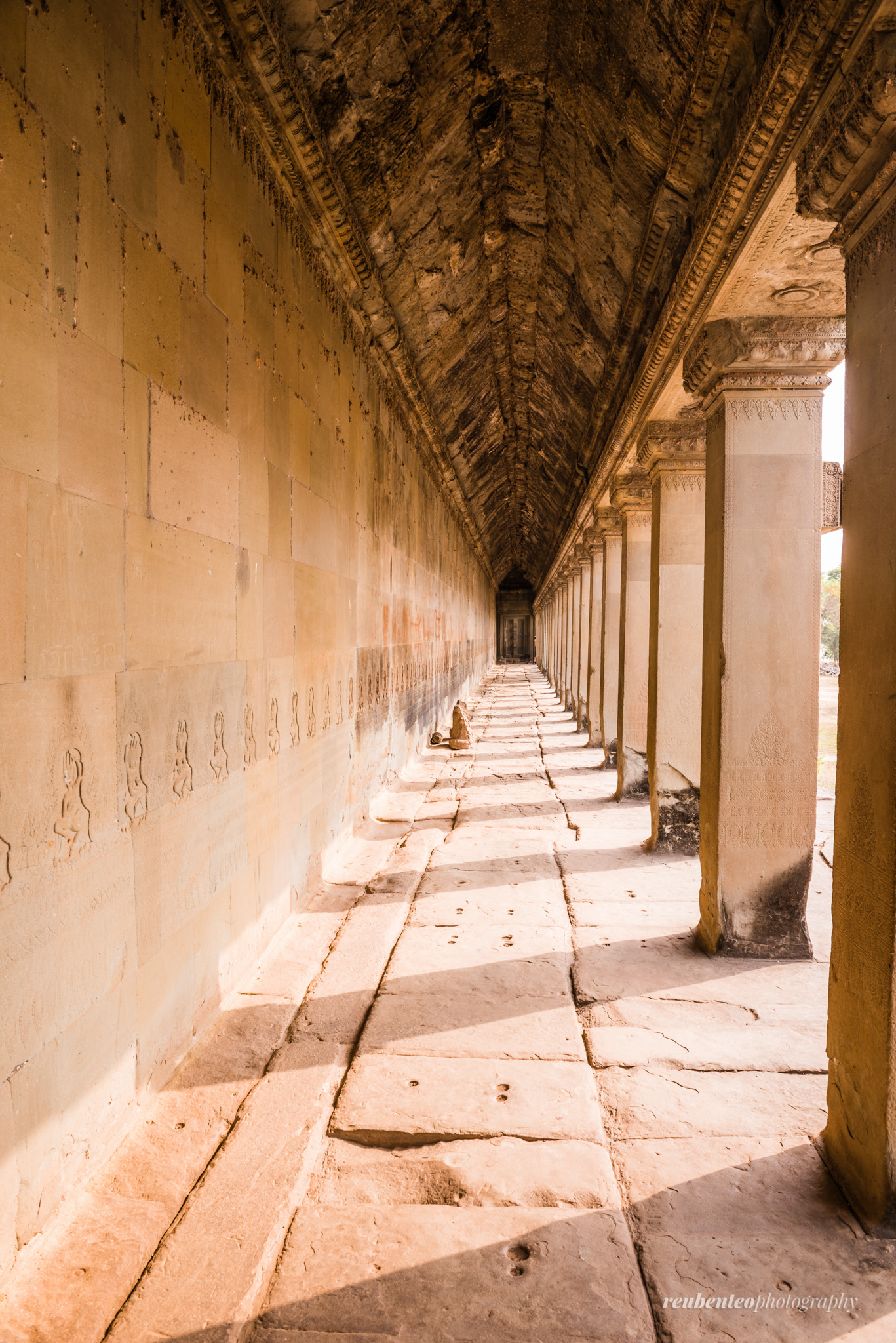 Along the corridor of Angkor Wat. The missing buddha bas relief is said to be destroyed by the Hindu Kings after Jayavarman VII 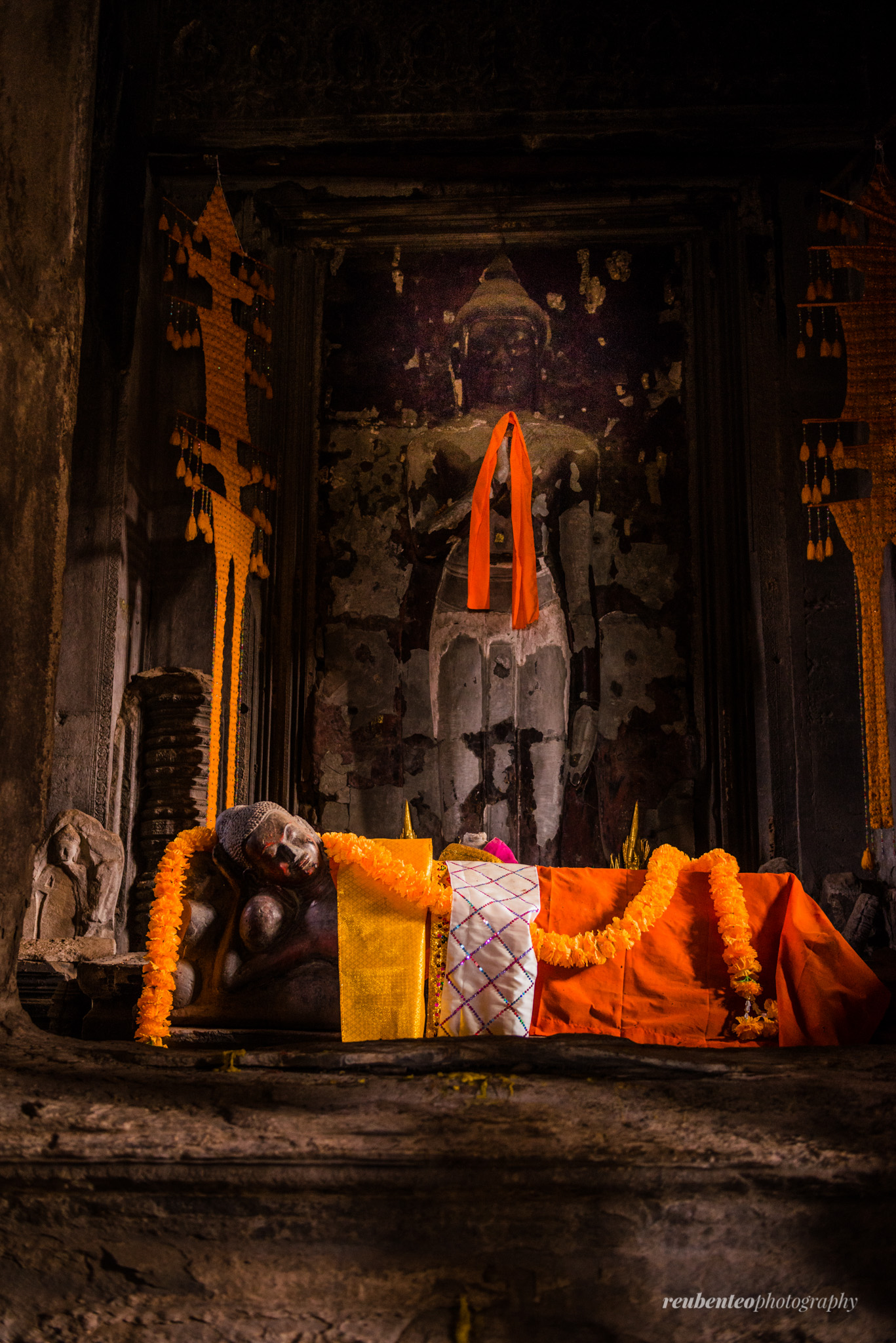 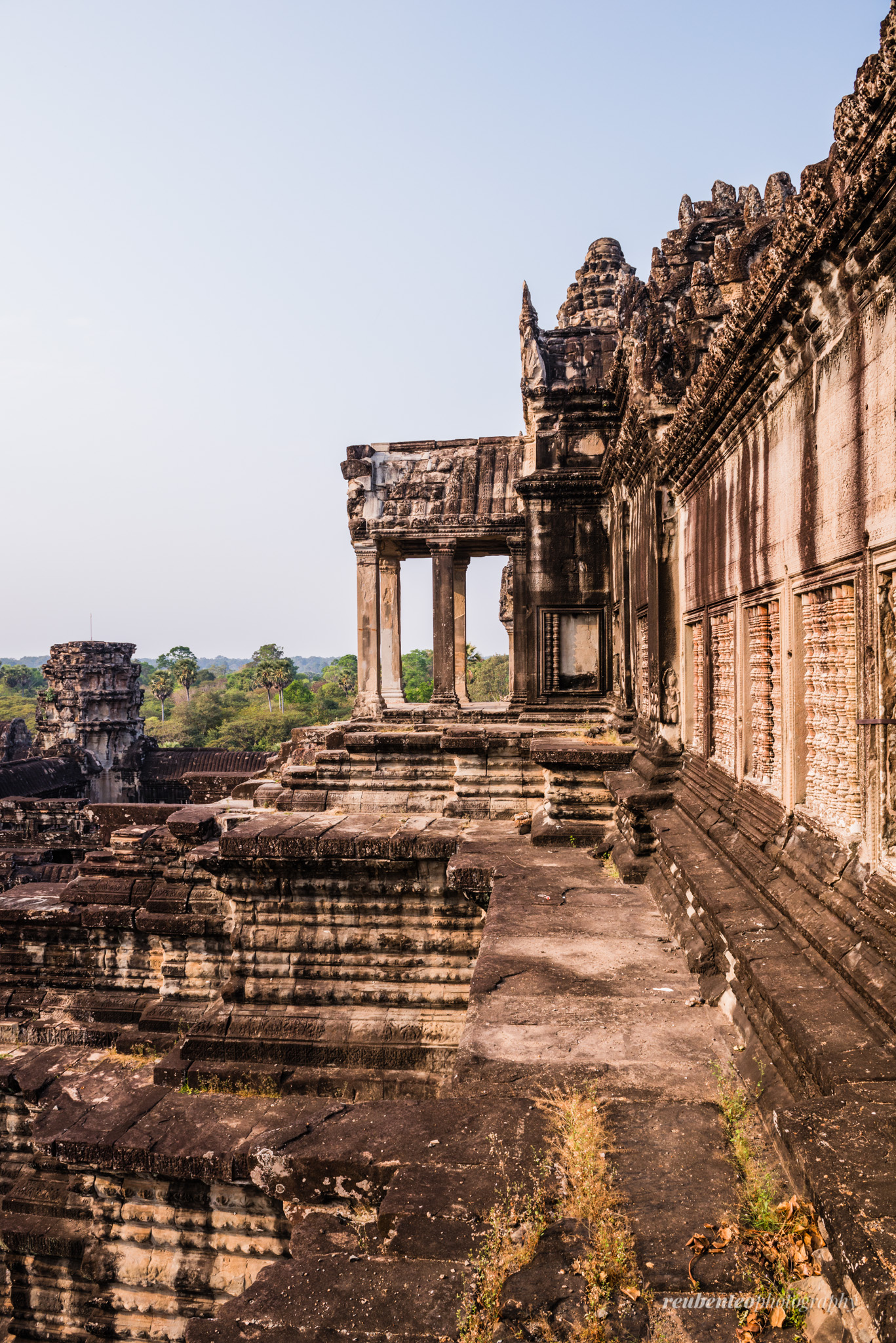 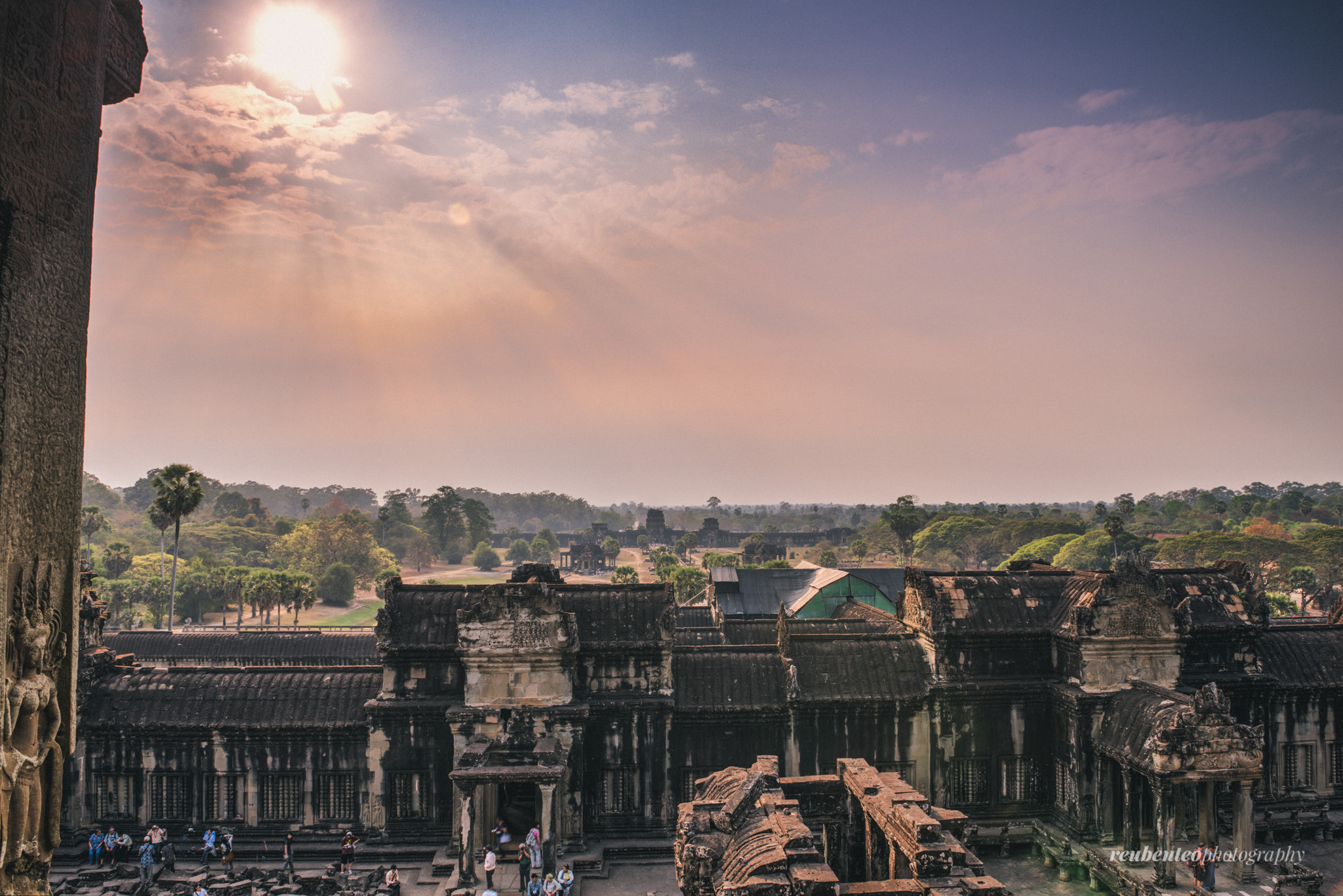 The main gates of Angkor Wat (view from Central Tower) 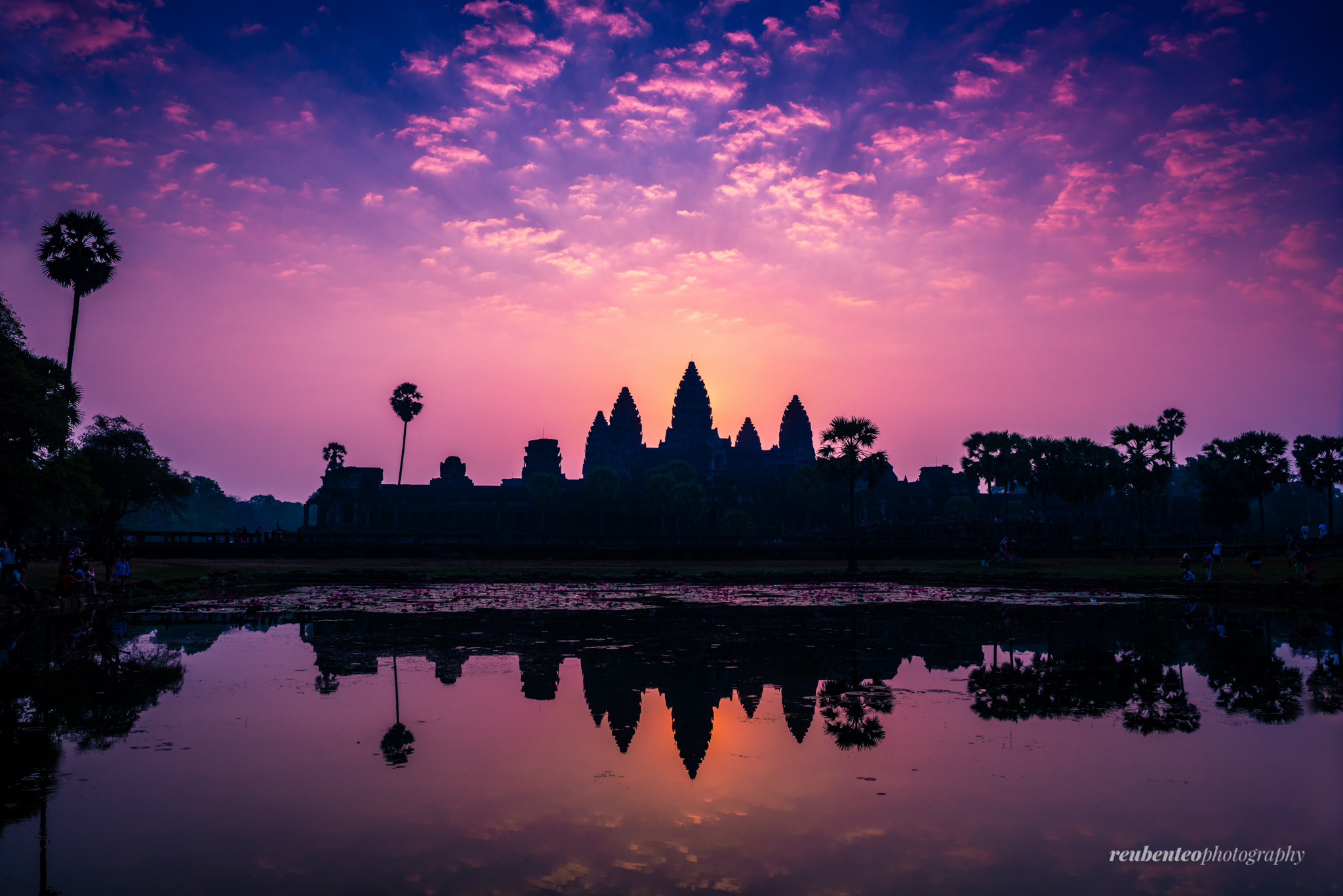 The sunrise on our 2nd day in Siem Reap