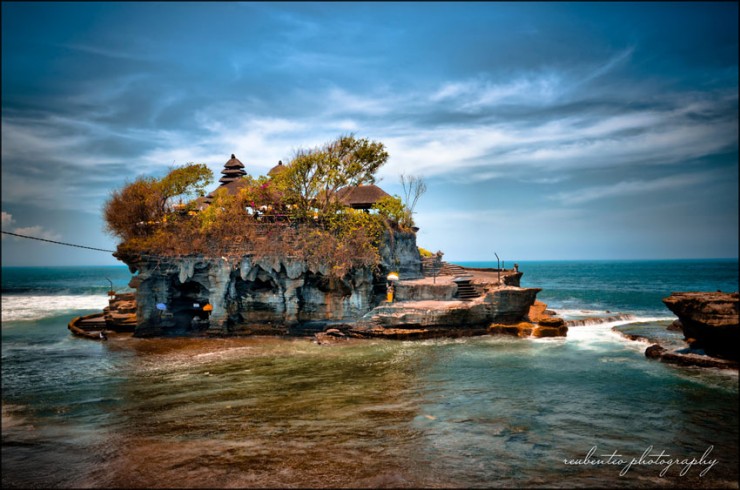 After a good night sleep, we got to wake up slightly later in the morning because today’s schedule was not as packed as the day before. After Fann & I grabbed our breakfast at the lobby restaurant, we waited for Boby to come fetch us to continue our photography journey. Our next destination was the famous Tanah Lot.

The Pura Tanah Lot is the most famous temple and iconic structures off the shores of Bali. It is a sacred temple that sits on a large offshore rock, hence the name Tanah which means ‘Earth’ and Lot which means ‘Sea’. The huge rock formation has been shaped continuously over the years by the ocean tide.

According to most of the sources I found online, Tanah Lot is famous for it’s sunset view. That is why before we decided to come here, we were arguing in the car whether to come to Tanah Lot for the sunset photography session of the Cliffs at Uluwatu. But in the end, we decided to go to Tanah Lot during the day. One of the reasons was that I was concerned of the tides and the amount of the crowds there. As most of us know, that it takes patience and time to shoot sunset and as this was my first time to Bali, I decided to get my sunset shot at Uluwatu, where I don’t have to worry about the ocean waves which would have made out equipments wet. But rest assured, I will come back to Tanah Lot for a sunset shot. 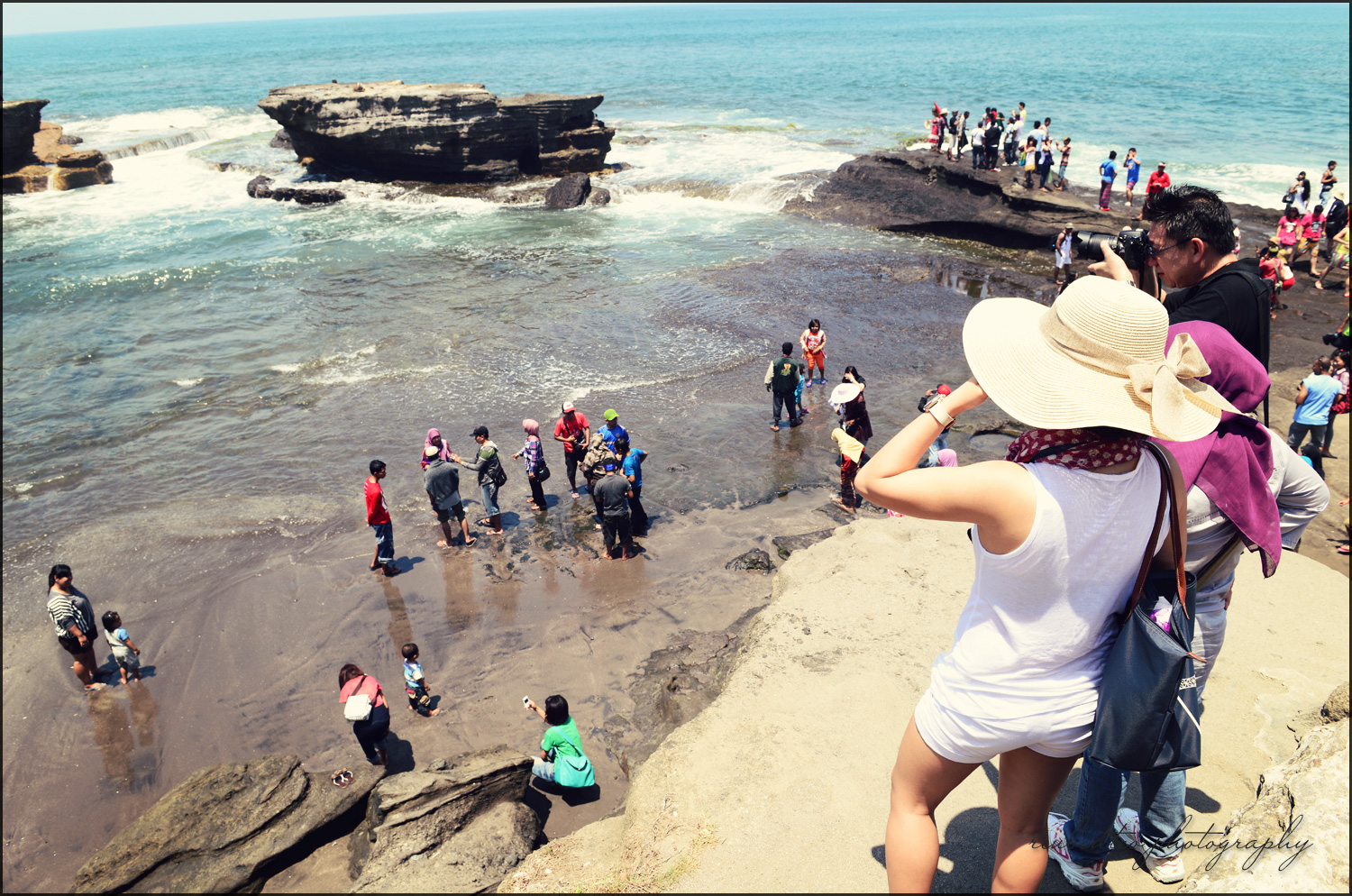 Anyways, as we reached the place, it was as usual, extremely crowded. Tons of Chinese and Taiwanese were hogging the rocks trying to get a glimpse of the temple that looks like it’s floating on the ocean. The waves that day was very high and powerful. Fann & I tried to risk everything to get a good shot of the temple. We found a huge enough rock and set up. Right after I finished my settings, a huge wave came towards me, I pulled Fann away quickly so that she could avoid the water. Unfortunately, I couldn’t save my feet and it got my shoes all wet. Thankfully, Fann and her gang of cameras were fine. After the wave was gone, I quickly took the shots and raced back nearer to the coast. 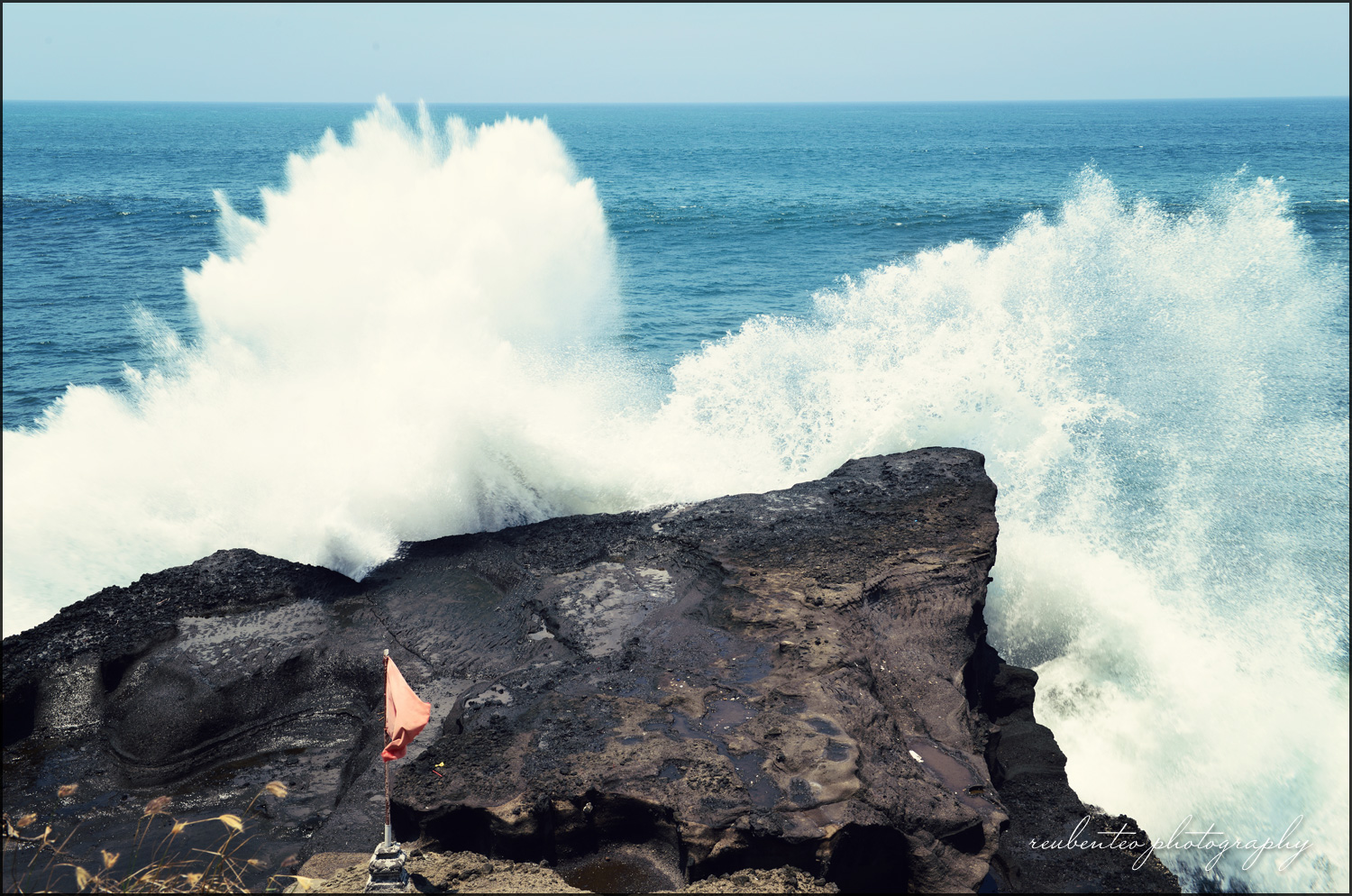 After that, we tried to find other spots that had a different view of the temple. It was quite difficult to move about because of the amount of tourists that were there. It was like a rave party with digital cameras and popping built-in flashes. We managed to climb to a higher rock where the Tanah Lot Temple stood in the lower front of our view. Despite all the tourists posing with their lame gestures, the view was spectacular. We managed to capture some shots of it from here. 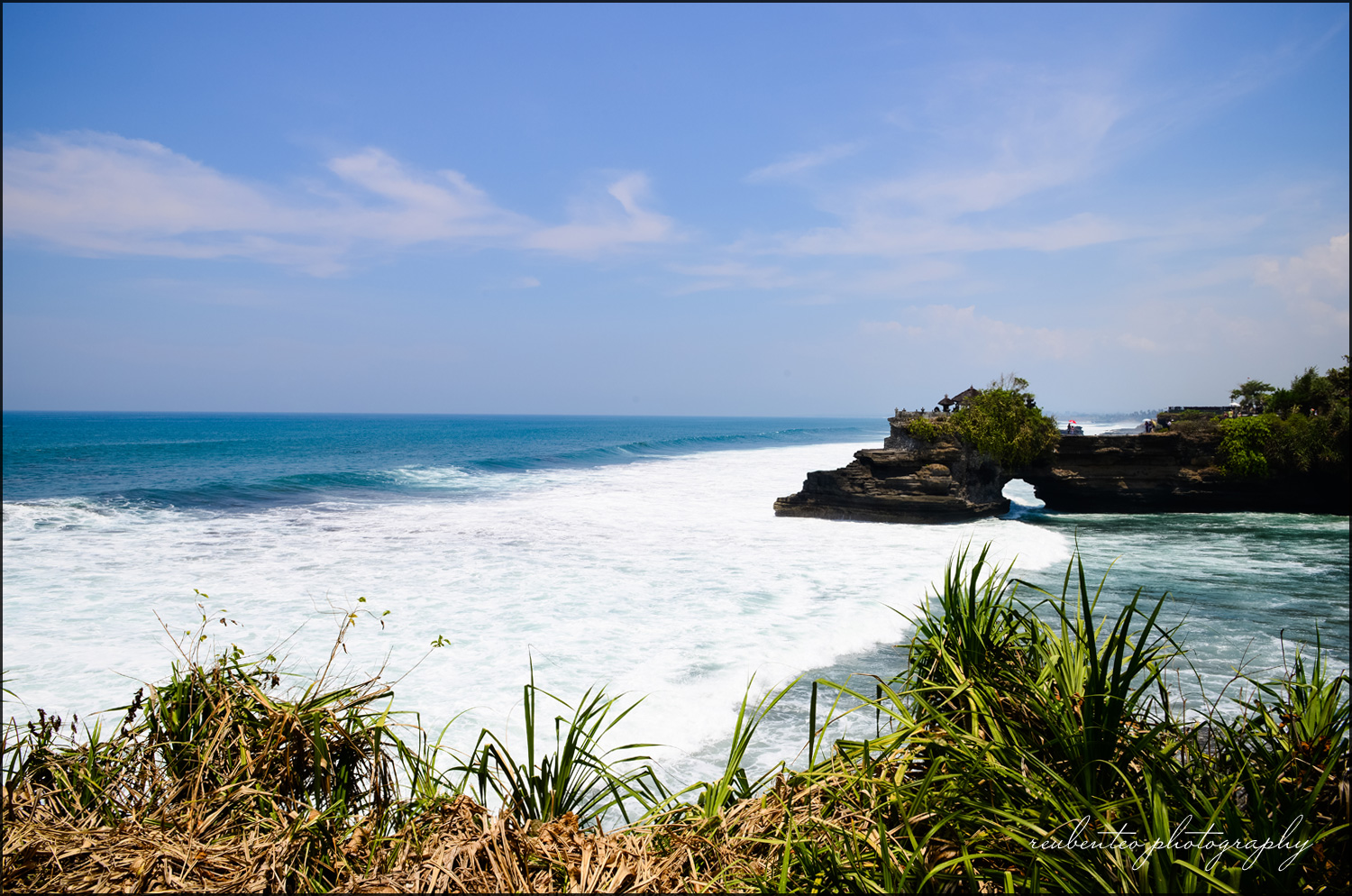 After that, we walked a little further down the right. There was another temple called Enjung Galuh Temple. It is a temple that is located on above of coral island which is sordid to middle of the ocean. Upon reaching the temple, there is a spot whereby you can view Tanah Lot Temple at another beautiful angle. Also, we could also view the beautiful Batu Bolong Temple. The temple was located on a rock that stick out to the ocean and had a huge hole (as you can see in the image). The view was spectacular. 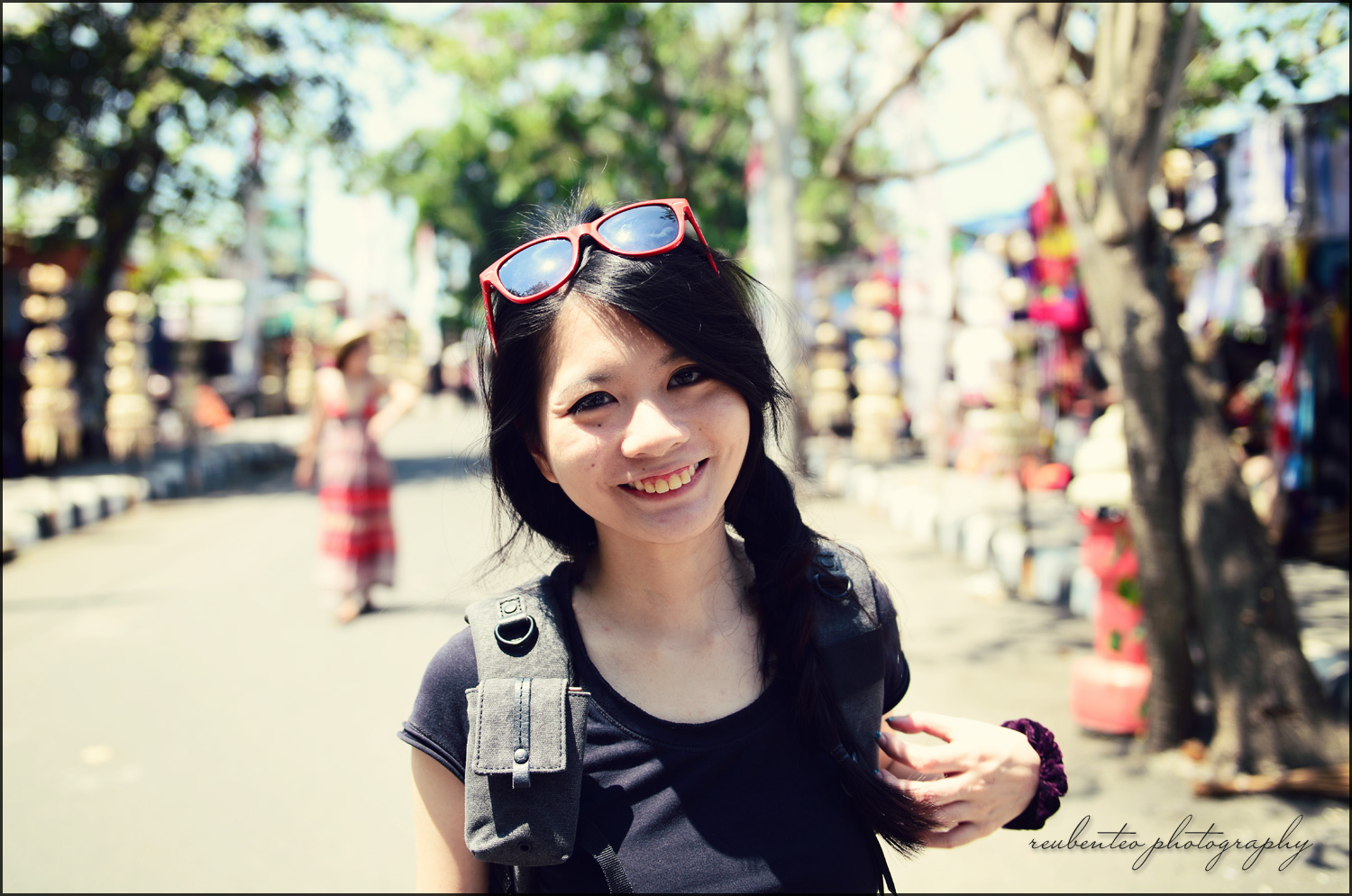 After visiting the temples there, we went over to the market place that was nearby and the things sold there were similar to all the other markets around the tourists spots. However, the market here in Tanah Lot was simply much more cheaper and the people here were friendlier as well. We made a couple of purchases of souvenirs here as well. 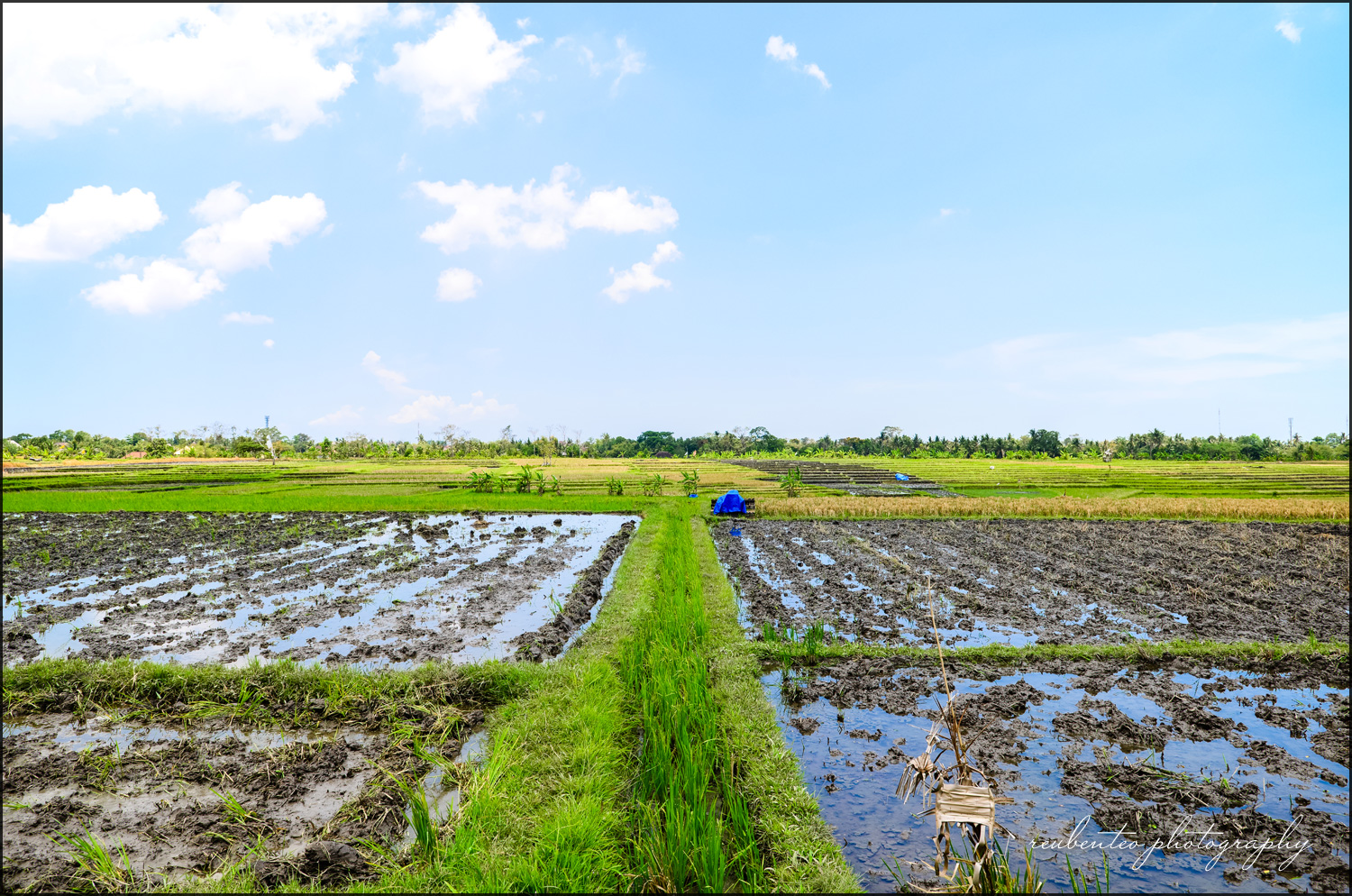 On the way to our next destination, we came across some beautiful padi fields. The place looked similar to Sekinchan. Too bad the time wasn’t right for harvest yet, therefore all the crops were still pretty short. We got down from the car only to find the cutest thing I’ve ever seen on a padi field. 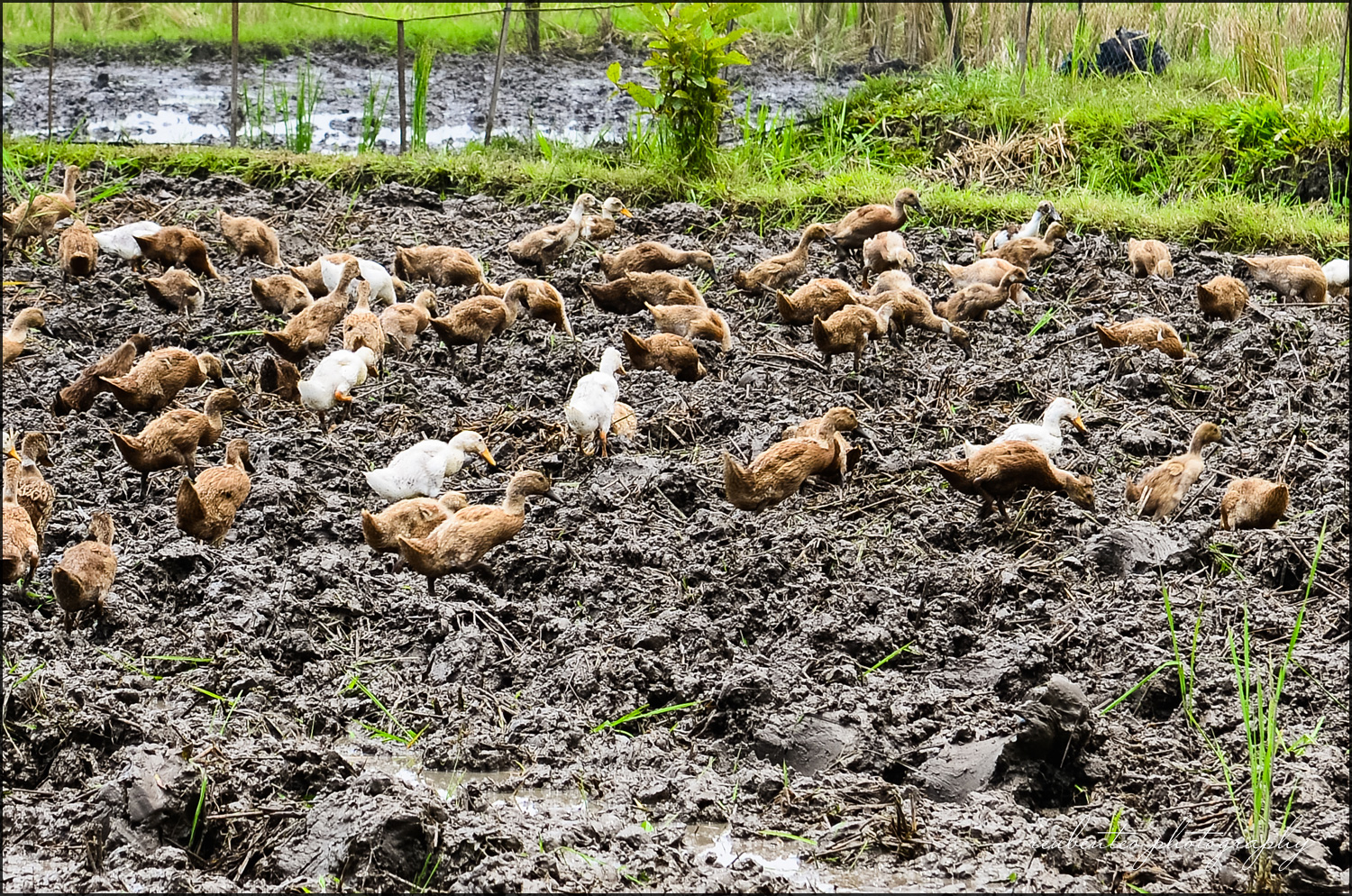 A group of ducks were waddling around the padi fields. The Balinese word for ducks is ‘Bebek’. Boby told us because it sounded like the the duck’s quack, hence the name. These bebeks were running around the fields feeding themselves with worms I’m guessing. There were white and brown ones. Never have I seen so many ducks in a padi field before. 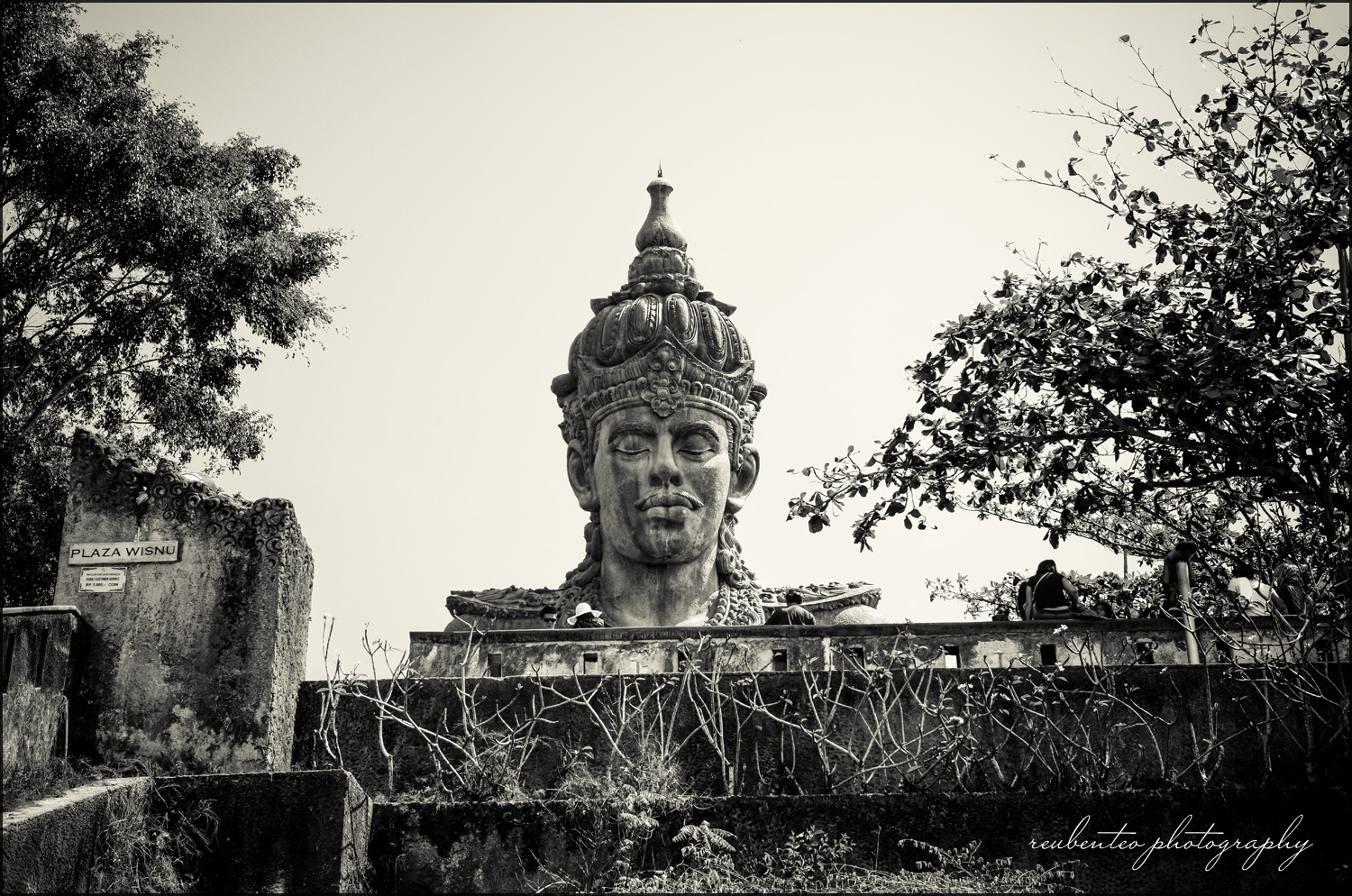 As we continued our journey down South, we reached our next destination called the Garuda Wisnu Kencana. It is a 240 hectares cultural park. It is situated 15 minutes from the Denpasar International Airport. With Uluwatu to the west and Nusa Dua to the east. The entrance fee was IDR50,000. 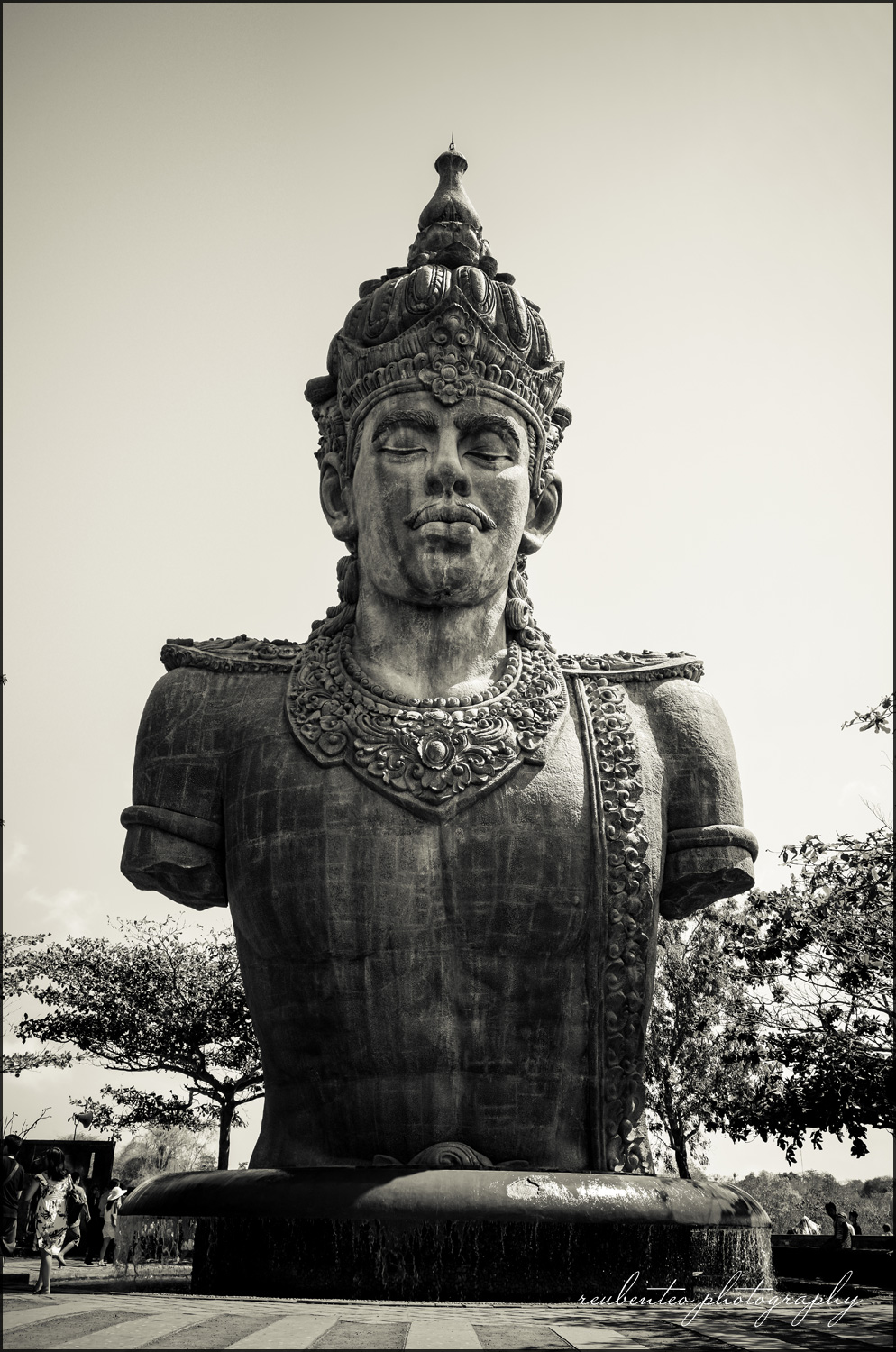 The place is devoted to the Hindu God, Lord Vishnu and his mount, Garuda. The cultural park is huge and we had to walk quite a certain distance to reach the massive Vishnu statue. It is designed and built by Nyoman Nuarta, one of Indonesia’s foremost modern sculptor, the Garuda Wisnu Kencana statue or GWK and its pedestal building will be standing 150 meters tall with its wings span 64 meters across. At the moment, we can see a partially built Vishnu statue without arms which is about 23 metres high. Upon completion, it will become the world’s largest statue. 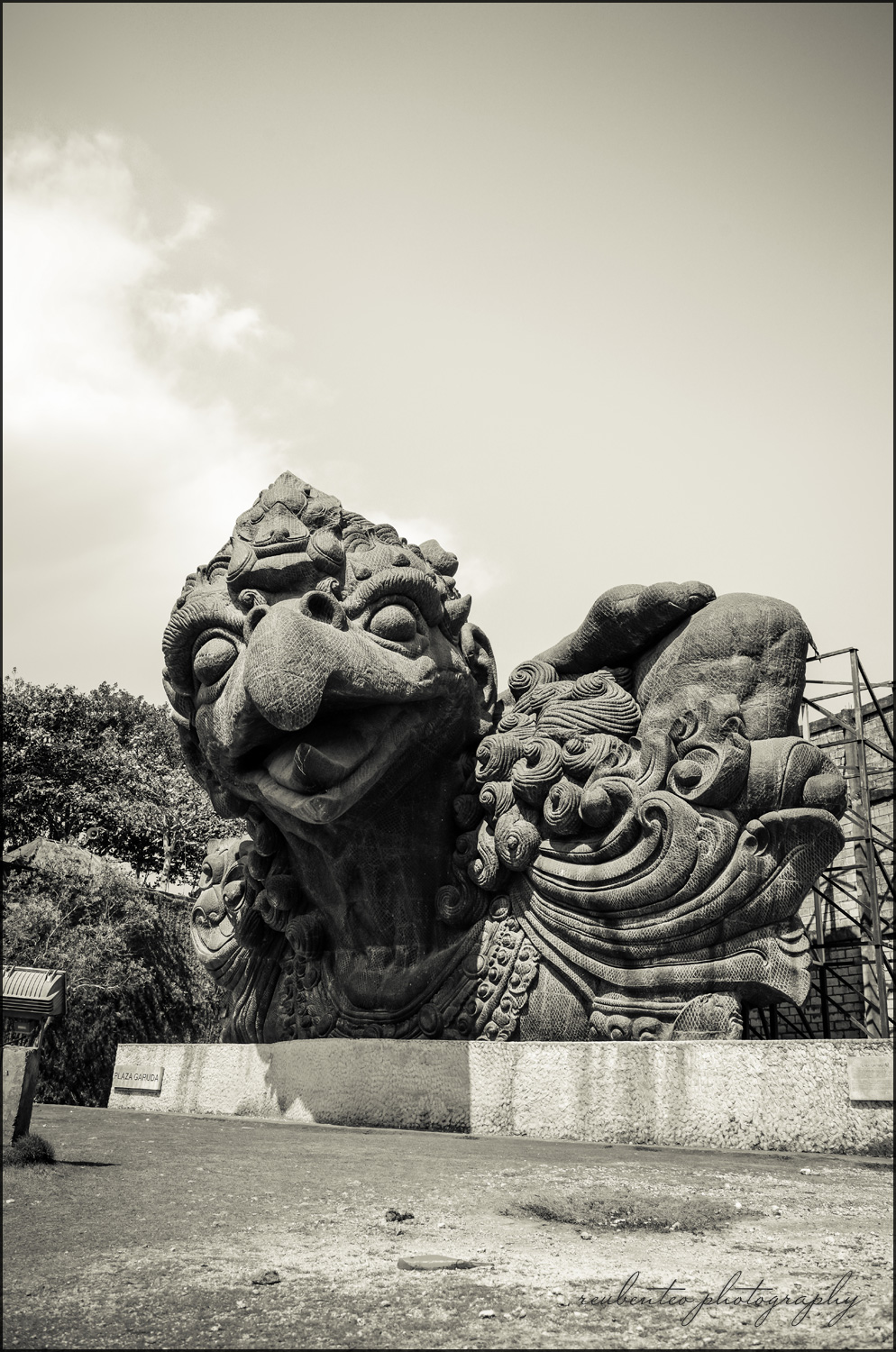 Right behind the Plaza Wisnu is the Plaza Garuda where the 18 meters tall statue of Garuda placed temporarily. The Garuda statue now overlooks a huge open space area called the Lotus Pond. The space is surrounded by colossal limestone pillars and is big enough to house about 7000 people. Also, that’s where Iron Maiden held their massive sold out concert last year. Pretty amazing huh? 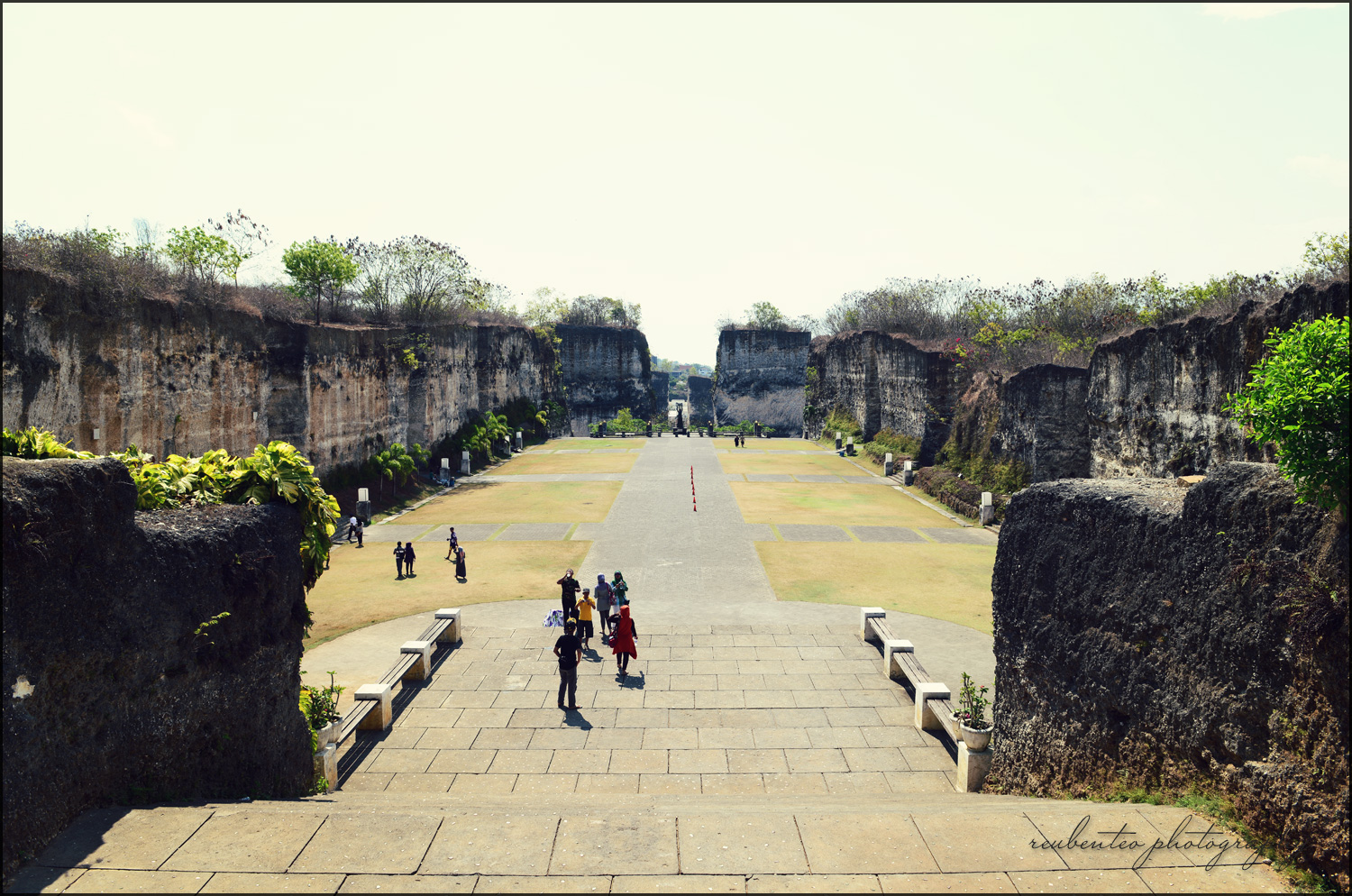 The weather was extremely hot that day. Our heads were roasting under the sun and there were no trees around. The only shade we could get were the giant stones standing around the area.

To be honest, I felt that the Garuda Wisnu Kencana was a pretty boring place. Not until the place is fully completed, I won’t be coming back here again. I’m guessing, it may be the heat that day as well. Fann & I took a couple of silly shots there and quickly headed back to the van where Boby was waiting for us. Here’s some extra shots: 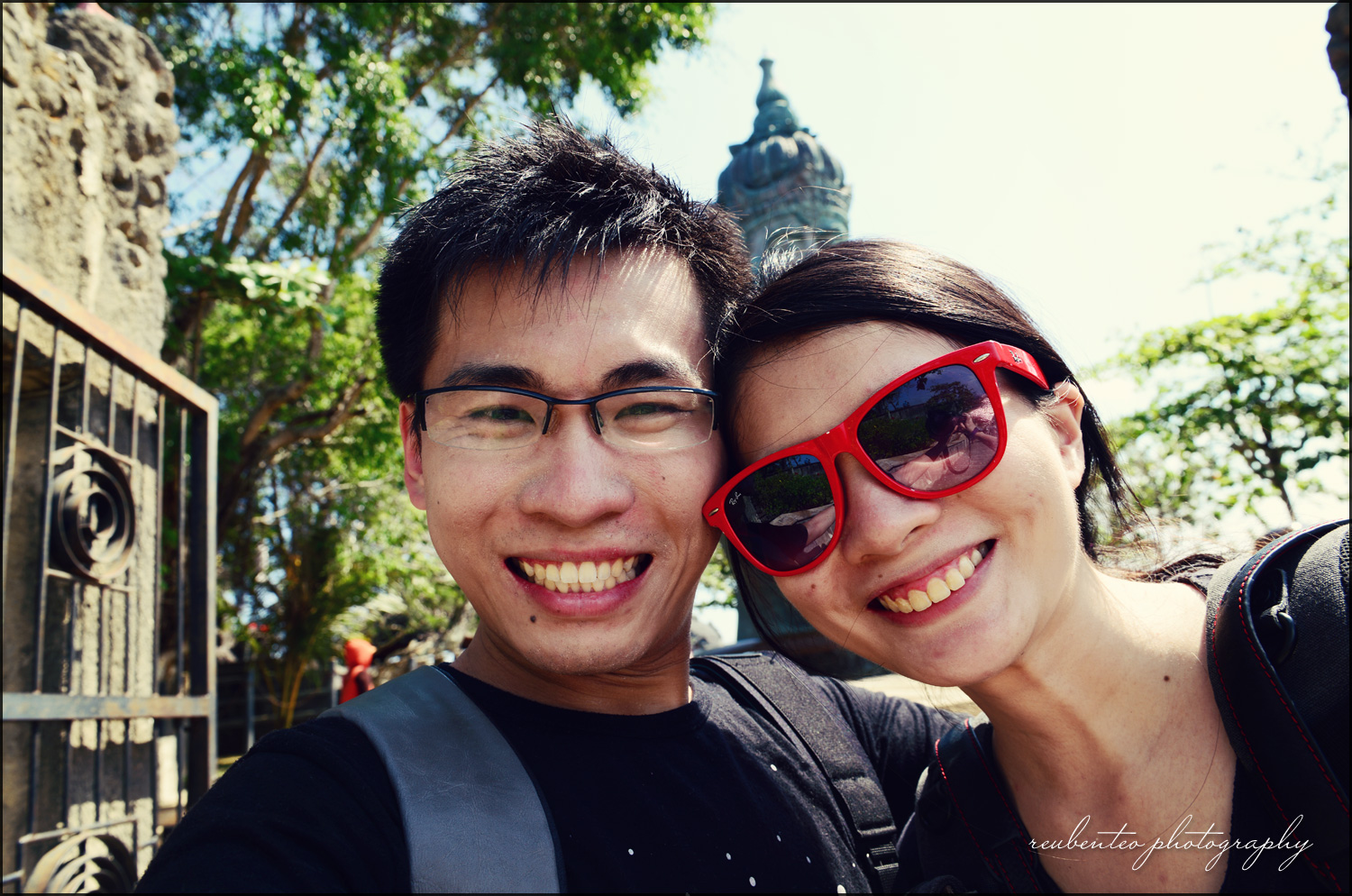 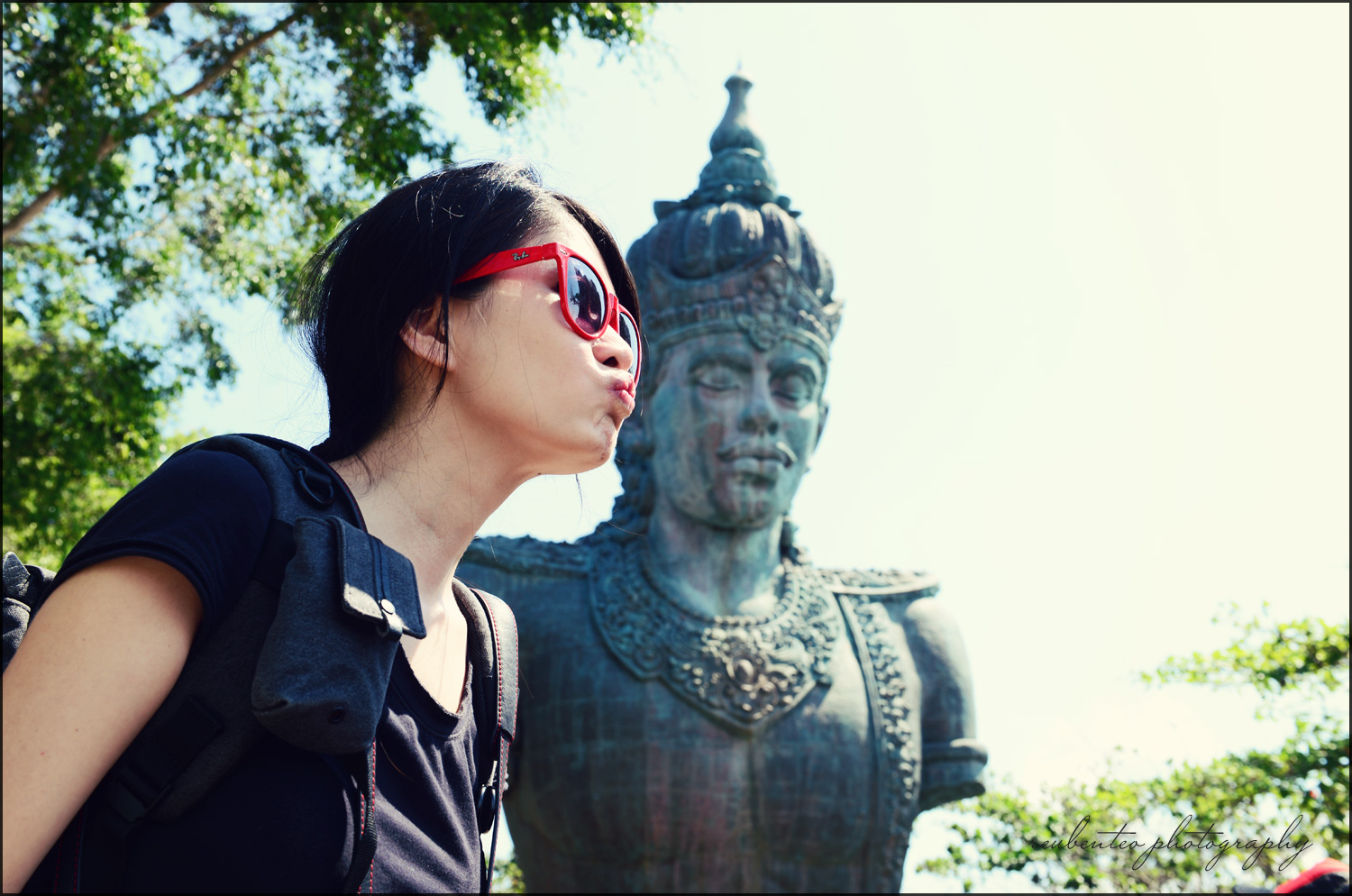