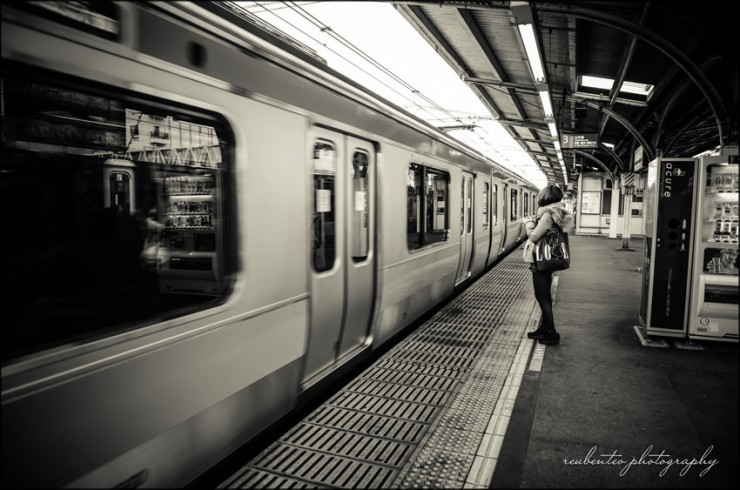 Japan, is one unique nation that best represents the fusion of both traditional and modern elements in their lifestyle. Despite Japan being an extremely high tech country, there’s always a little something that is never too far away from their roots and culture. On the 23rd of December, I was right there at the Imperial Palace witnessing the very best of the Japanese people’s patriotism and national pride. It was not only a national holiday, it was the Emperor’s Birthday. 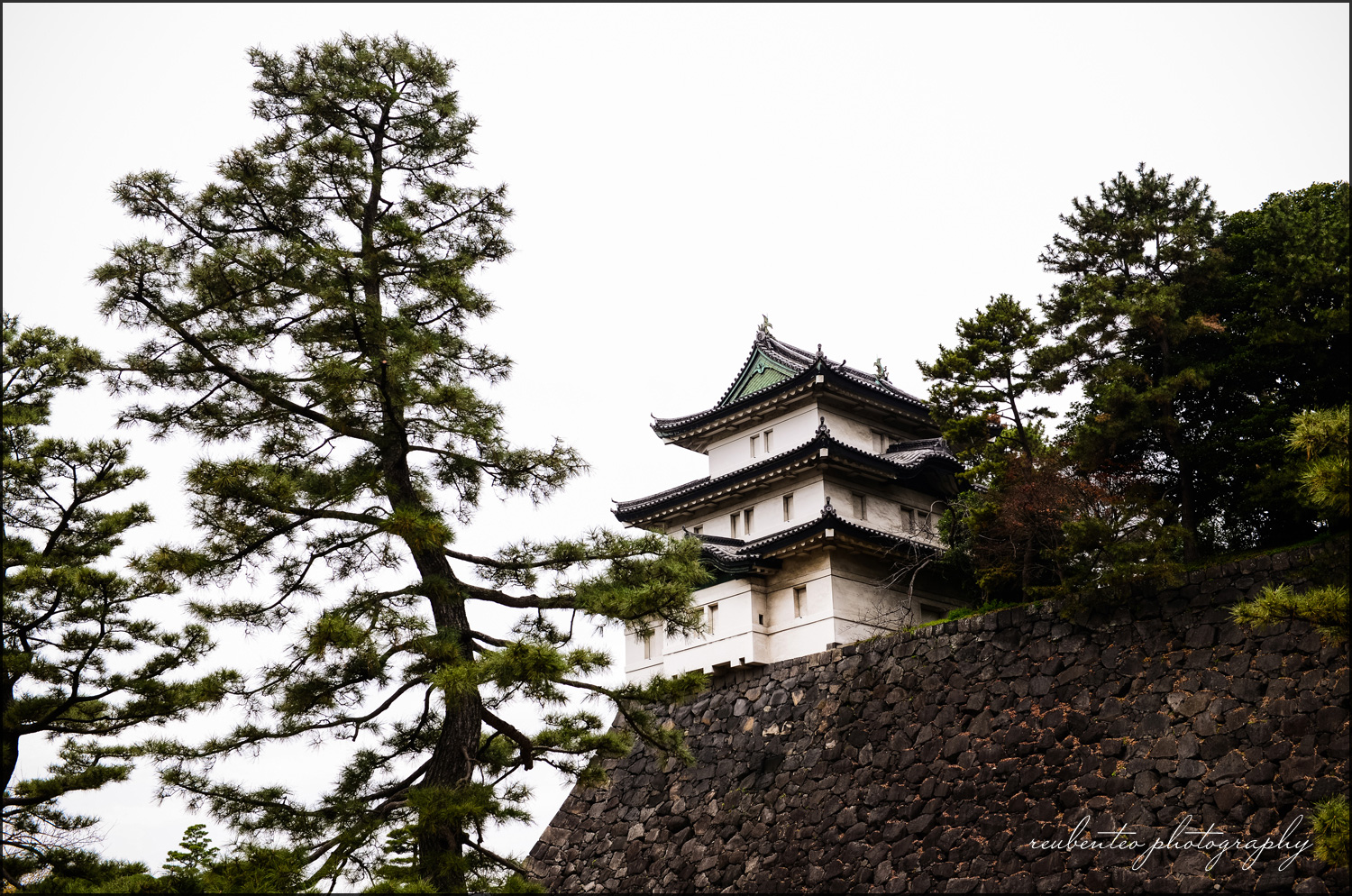 We made this a compulsory pit stop in our itinerary because this only happens once a year and what also makes us so eager to visit the Imperial Palace during this time is that it (namely the buildings and inner gardens) is generally off limits to the public. Only during the Emperor’s Birthday and during the 2nd day of the New Year is the palace open to the public. During his Majesty’s birthday, He will be giving short speeches in 3 time slots in the morning. The first appearance is around 10:20 a.m. followed by a second appearance at around 11:00 a.m and lastly the third appearance which is around 11:40 a.m.

We woke up very early because we heard that it would be very crowded and we hoped that we could see the emperor at his first appearance. So, we hopped on the JR Yamanote Line and within a few stations, we reached Tokyo Station.

The Imperial Palace is only a 10 minutes walk away from Tokyo Station. Find the Marunouchi Central Exit when you’re there. Once you have exited and in Marunouchi, just walk all the way straight and you will see the Kikyomon (Kikyo Gate) 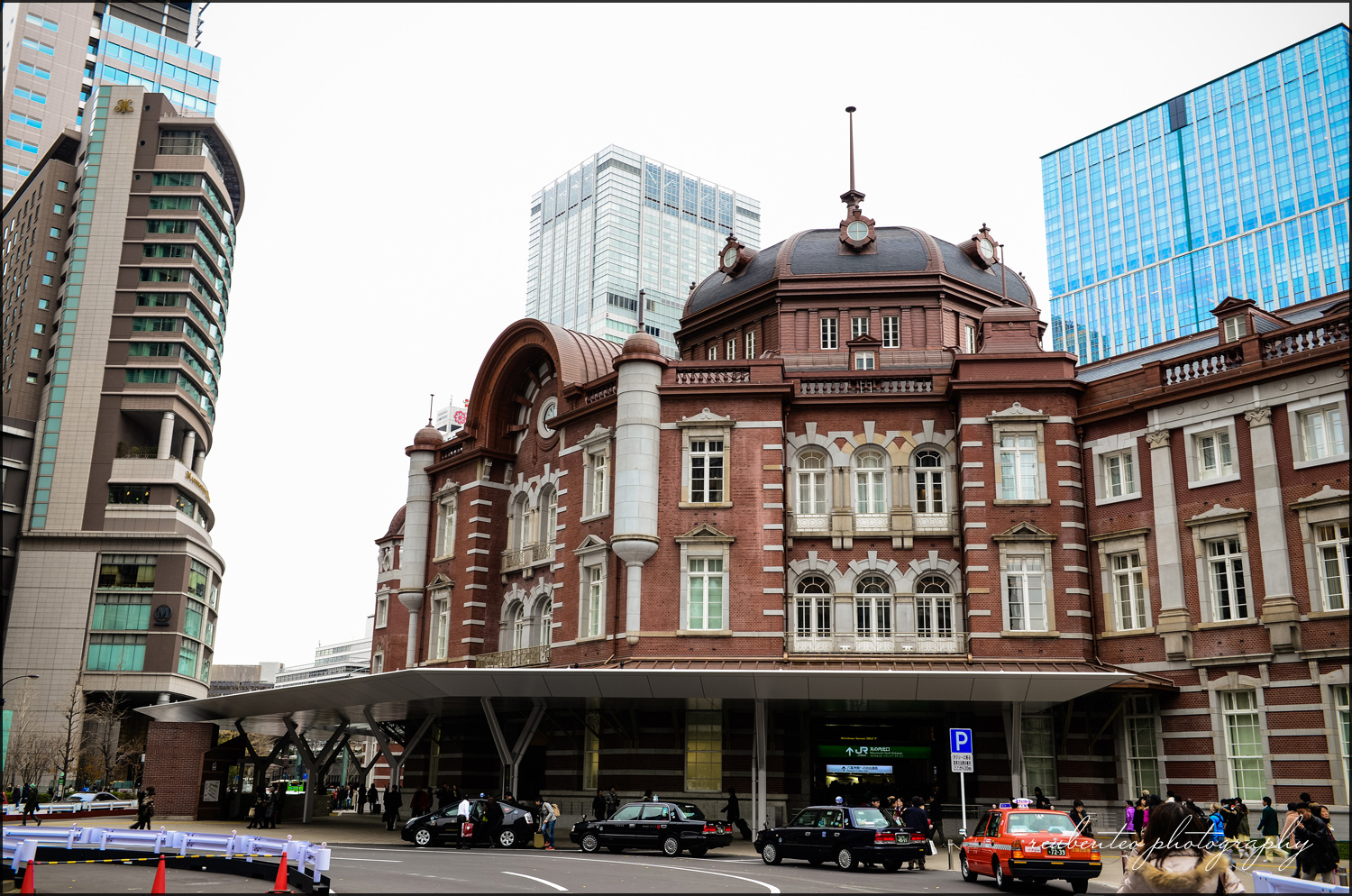 As we walked out of the station, I was amazed by it’s beautiful structure. Tokyo station is constructed in distinctive Europeon styled red bricks. It was built back in 1914 and it looks exactly like those vintage train stations. The iconic Tokyo Station building includes new commercial facilities such as the high-end Daimaru Department Store and the Tokyo Station Hotel. In fact, this station attracts more than 1.1 million passengers daily and is also one of the most busiest stations in Eastern Tokyo with over 3000 trains per day. 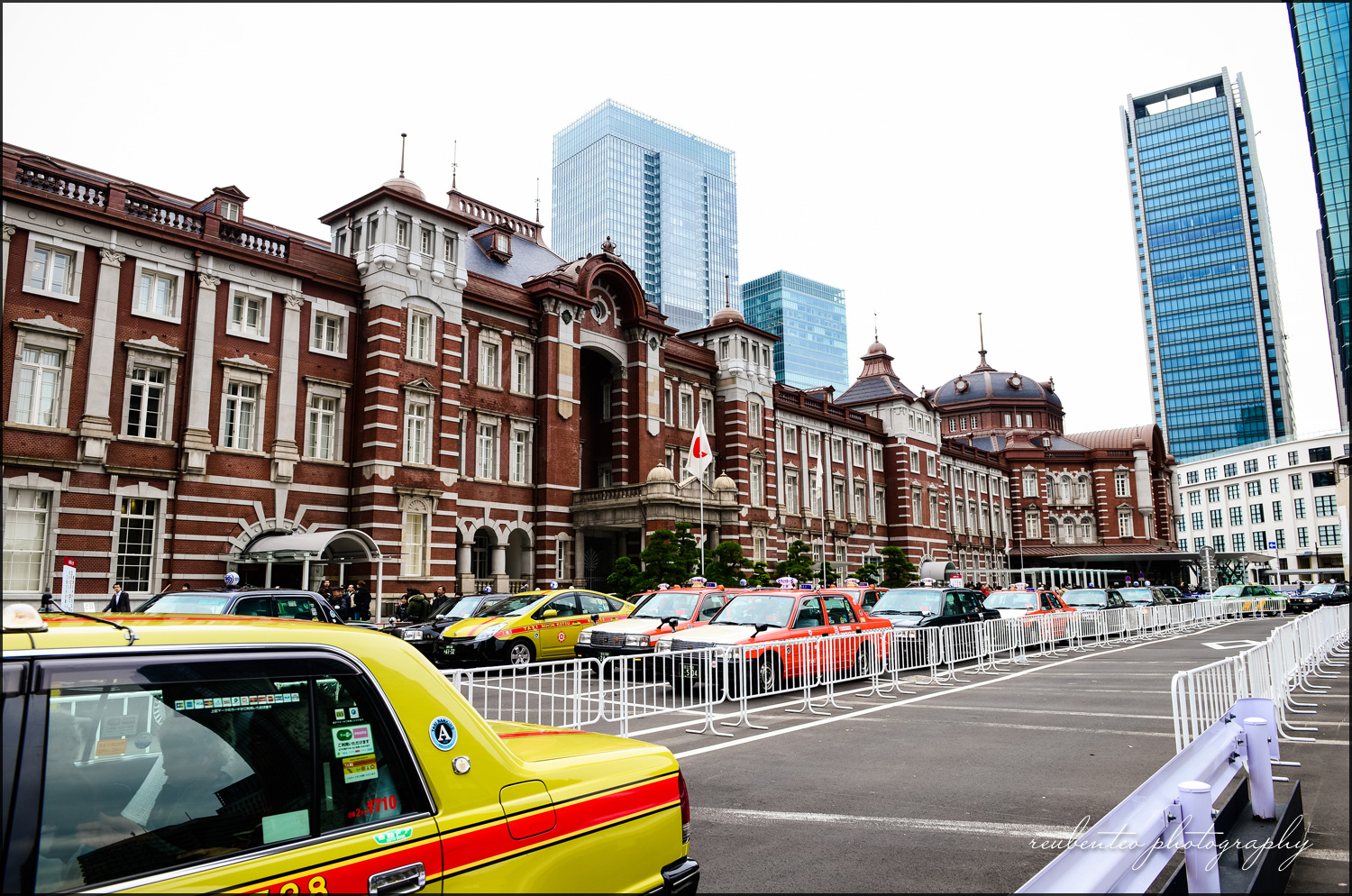 While we were exiting the station, barracades awaited us as it leads us to the direction of the Imperial Palace. If you lost your map on the way, you don’t have to worry because you can see that most of the crowd is heading towards the palace’s direction. 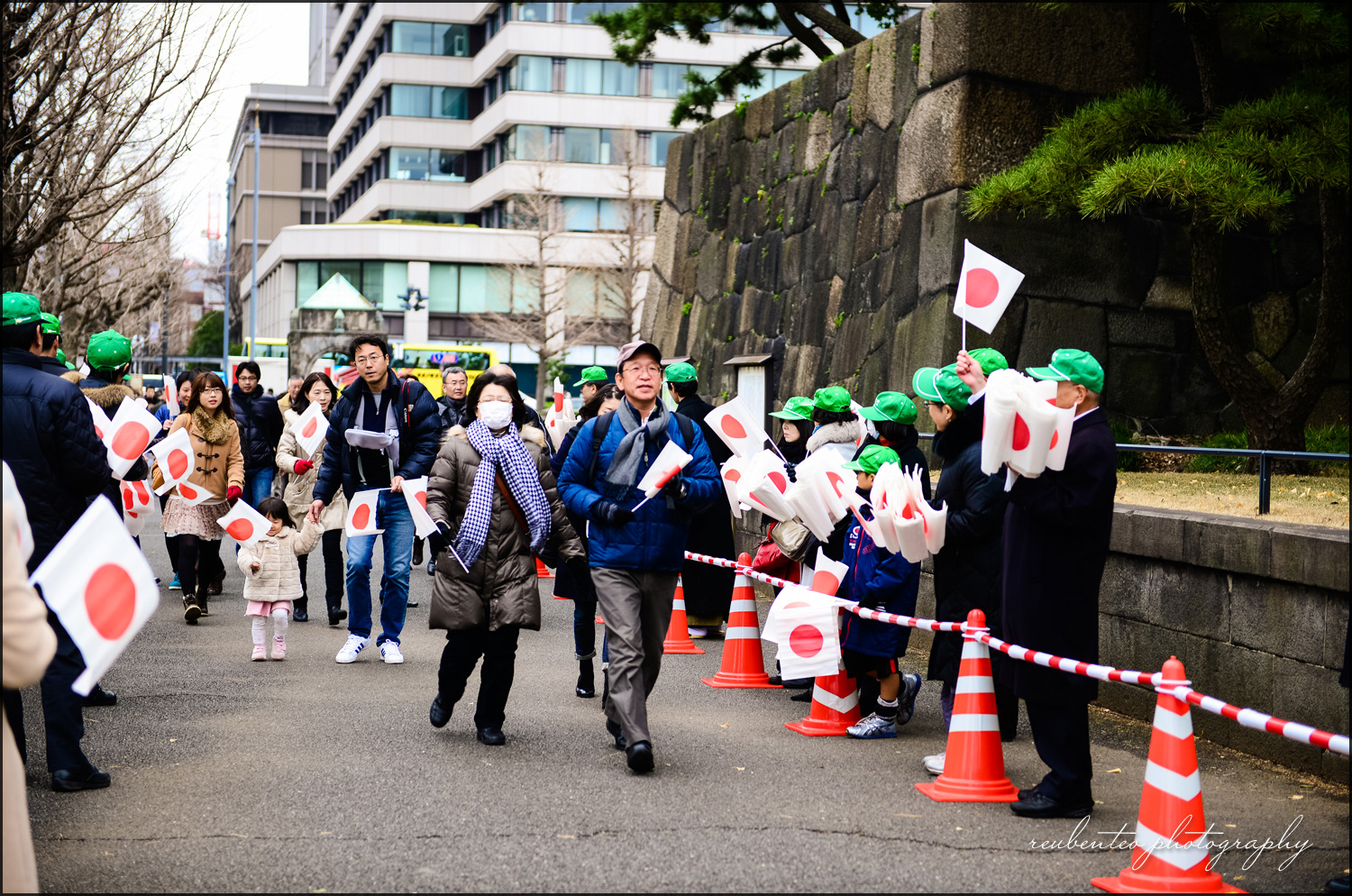 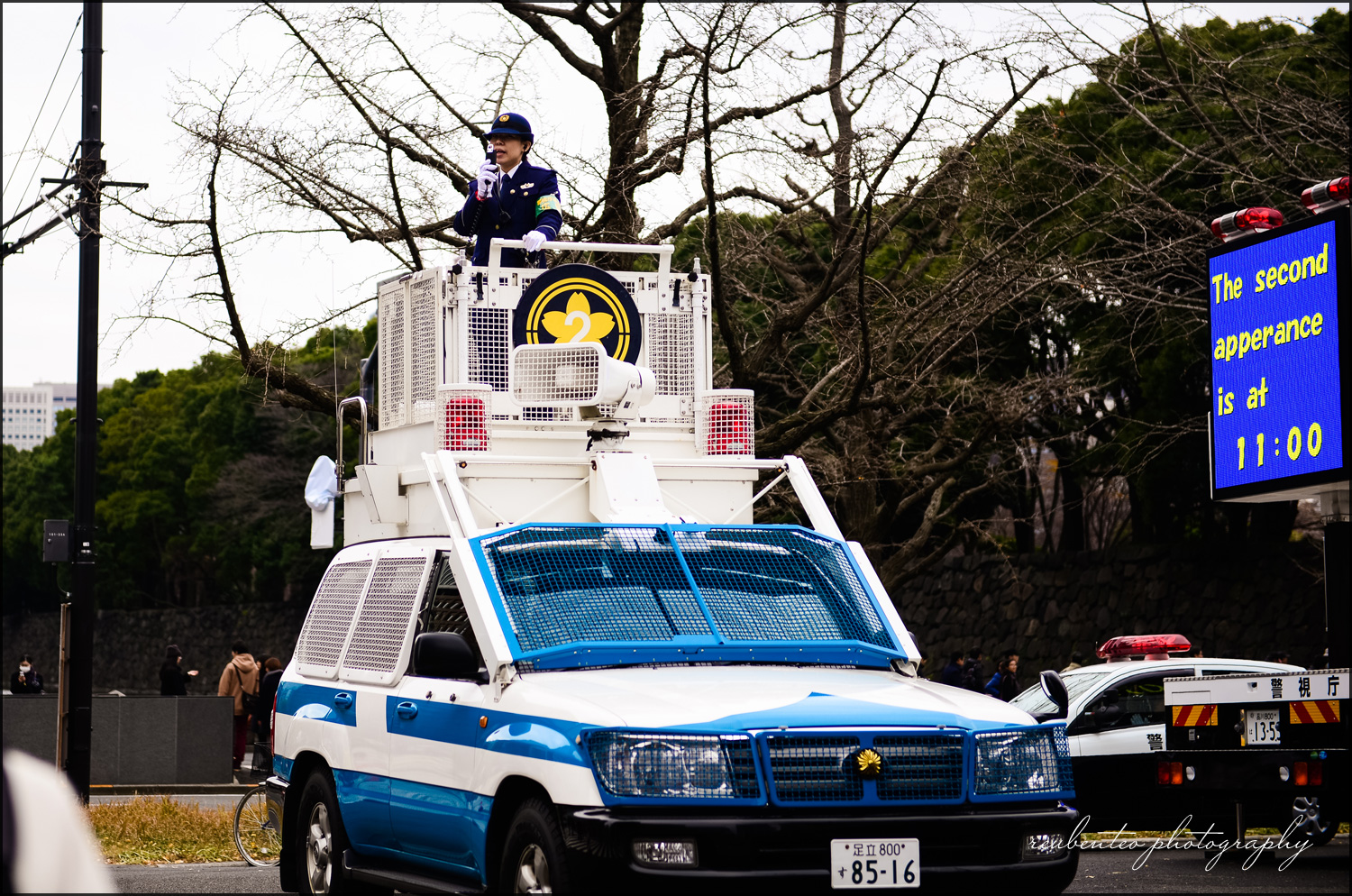 We were really excited as we were walking together with the crowd. Although I couldn’t understand what the Japanese around were talking about, but I could sense that they were feeling rather delighted. As we walked nearer to the palace, there were a line of happy and jumpy Japanese, giving out the Japanese Flag. As we walked further, there were policemen constantly reminding people to be at the Imperial Palace on time for the next appearance and to enter the Imperial Palace Grounds in lines. 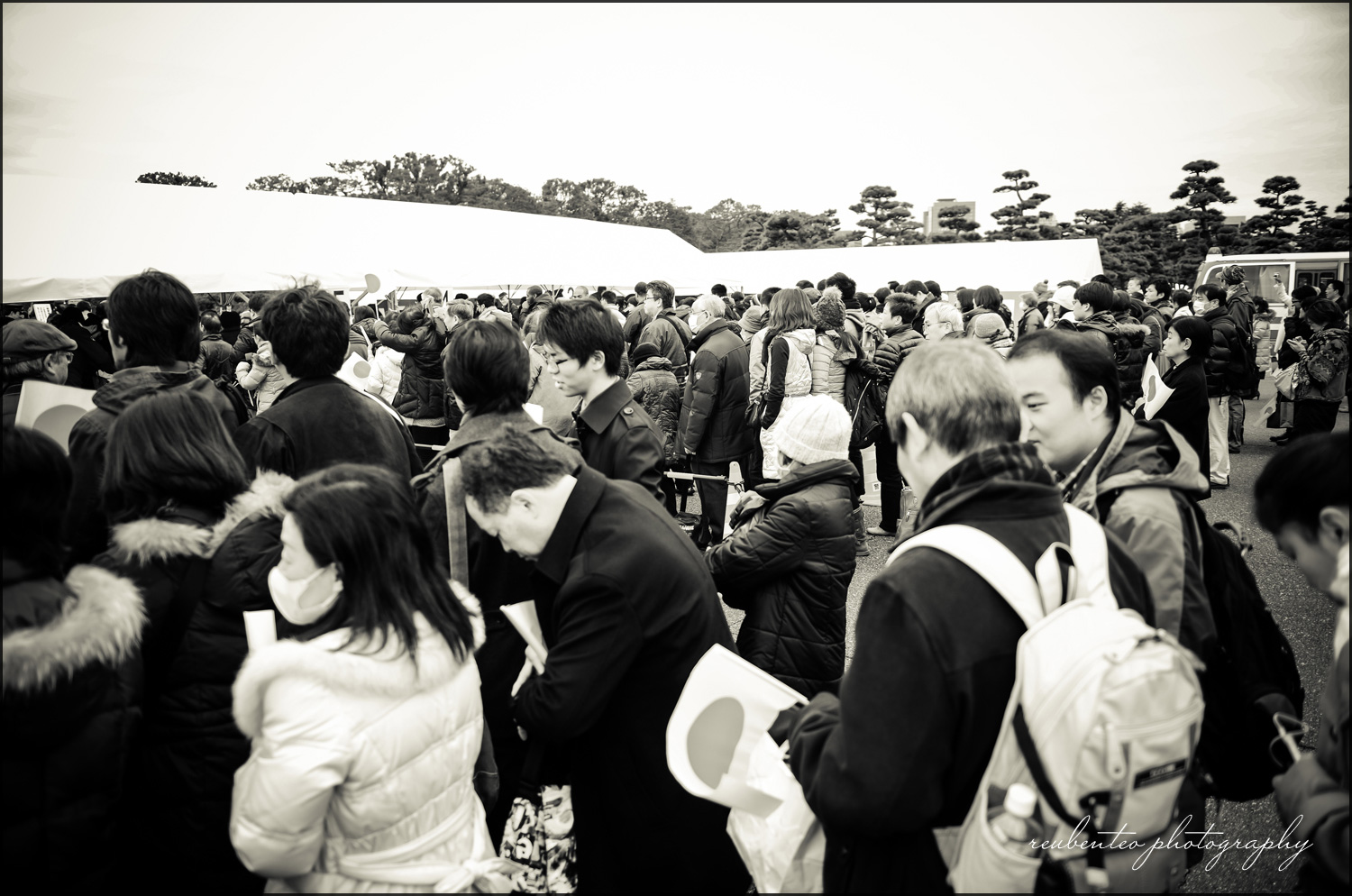 Upon reaching the Nijubashi main gate, there were police checkpoints. The police has to check all of our bags and camera equipment. Water wasn’t allowed into the Imperial Palace and so are dangerous objects like knives, DUH~. Japan is well known for their patience while queing and waitng, and this was just another queing day for them. Everyone was so well behaved and there were no one cutting queues and everyone was really patient despite that the time for the Emperor’s appearance was getting near. 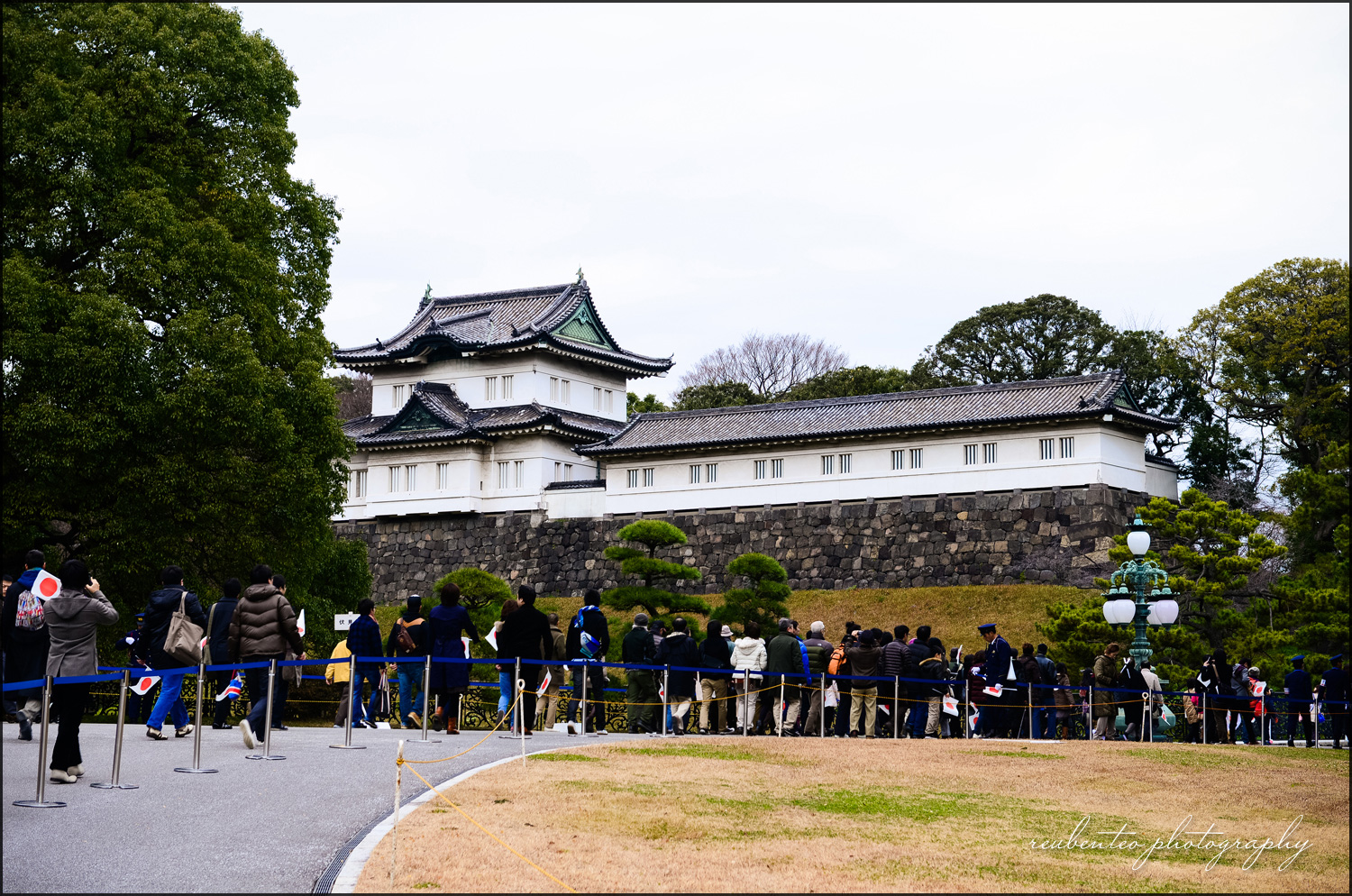 After it my turn for inspection was done, I thought that we were almost reaching the Chōwaden Reception Hall. Well, we still had to walk and walk and walk and walk. It felt like 30 minutes had gone, I wasn’t sure. The palace grounds was extremely huge. We passed by bridges and guards, we passed by gates and more roads. It was like a never ending journey of the yellow brick road. 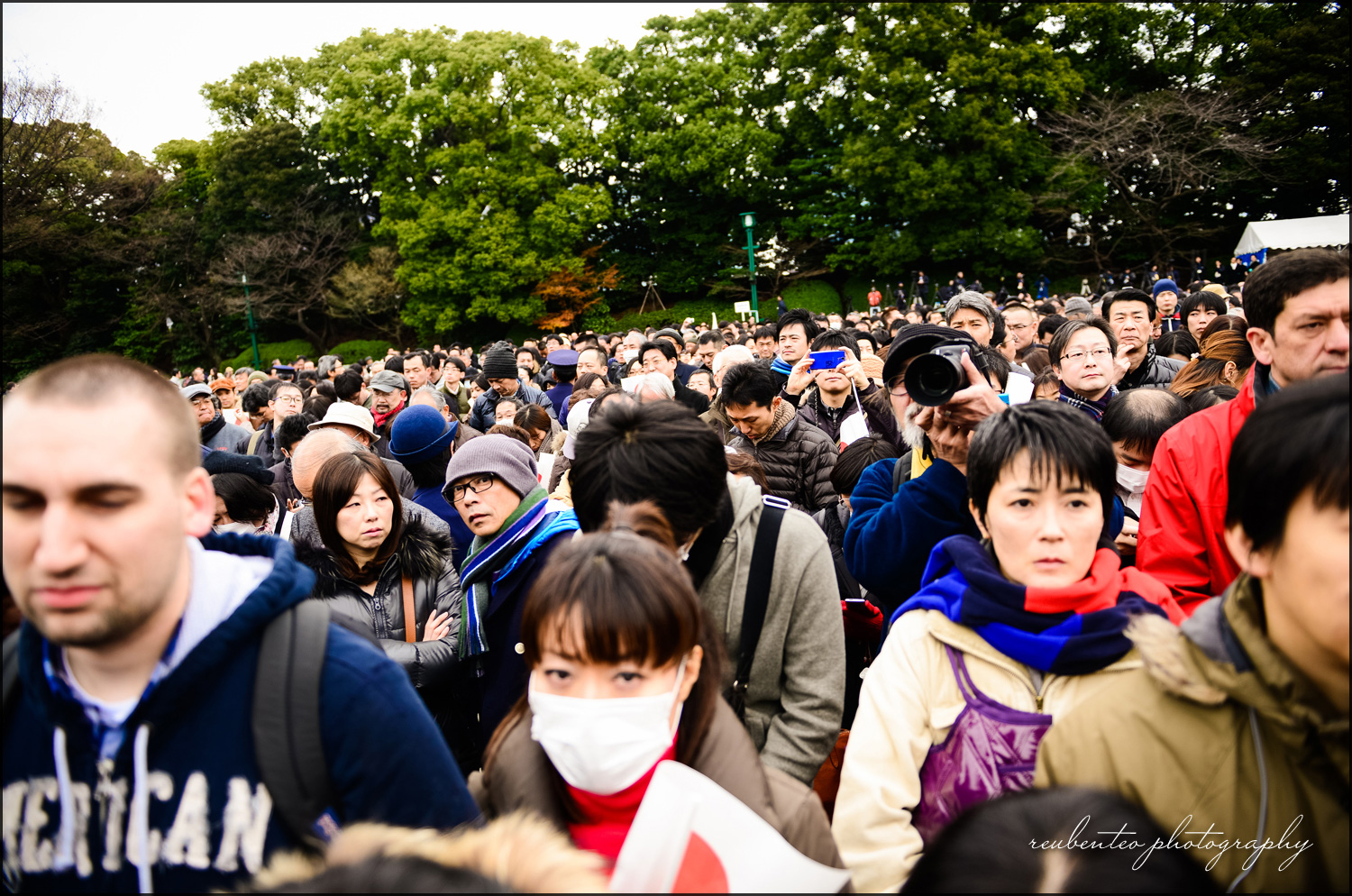 Finally, we reached the hall. It was packed with lots and lots of people. Fann and I tried to squeeze and find a good spot where we could at least take a glimpse of the Emperor when he gives his speech on the balcony. I was pretty amazed by how much this hall could fit so many people and there were people of all ages and ethnicities. There were also those who dressed in suits and ready to greet their beloved Emperor. 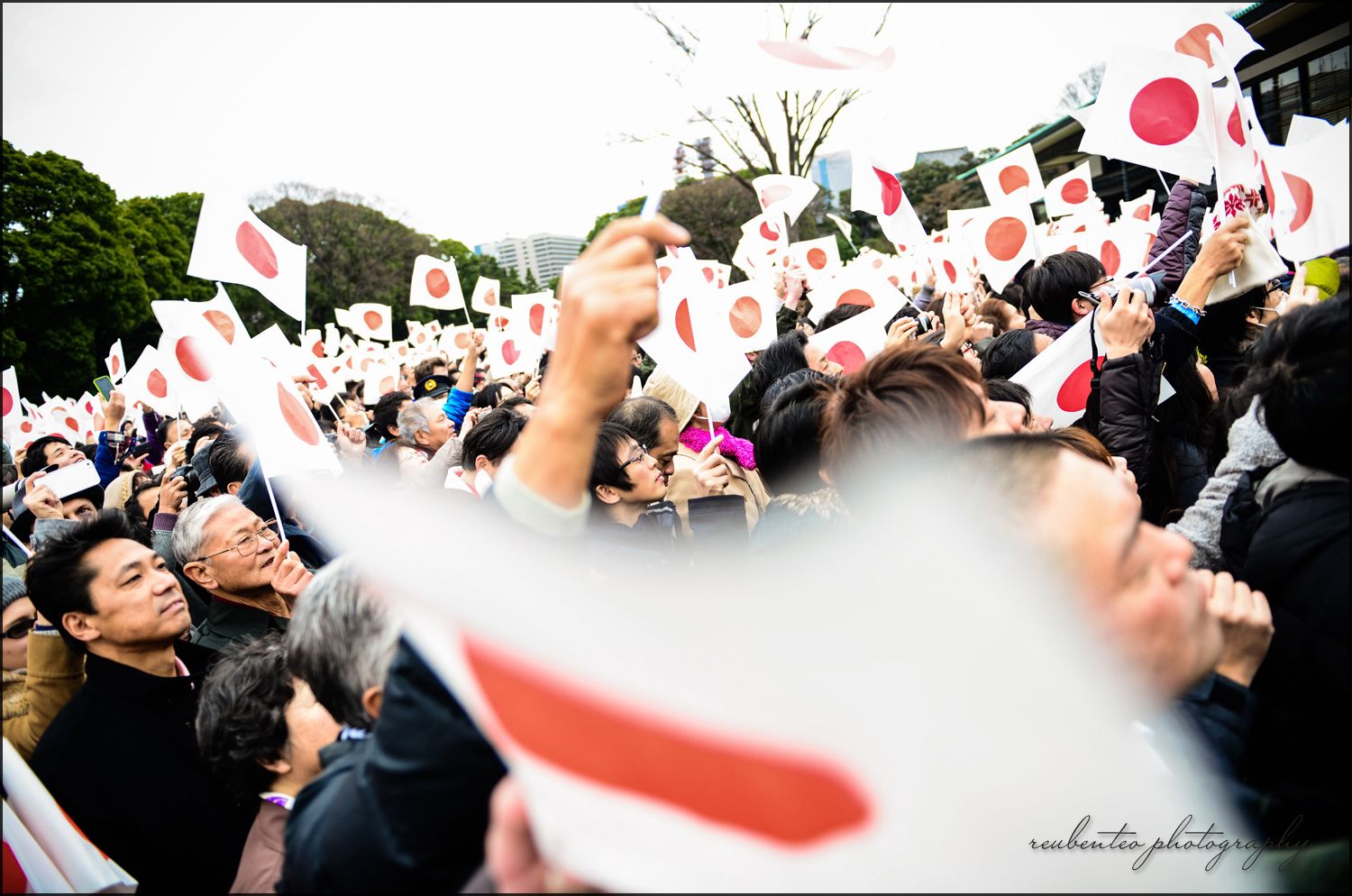 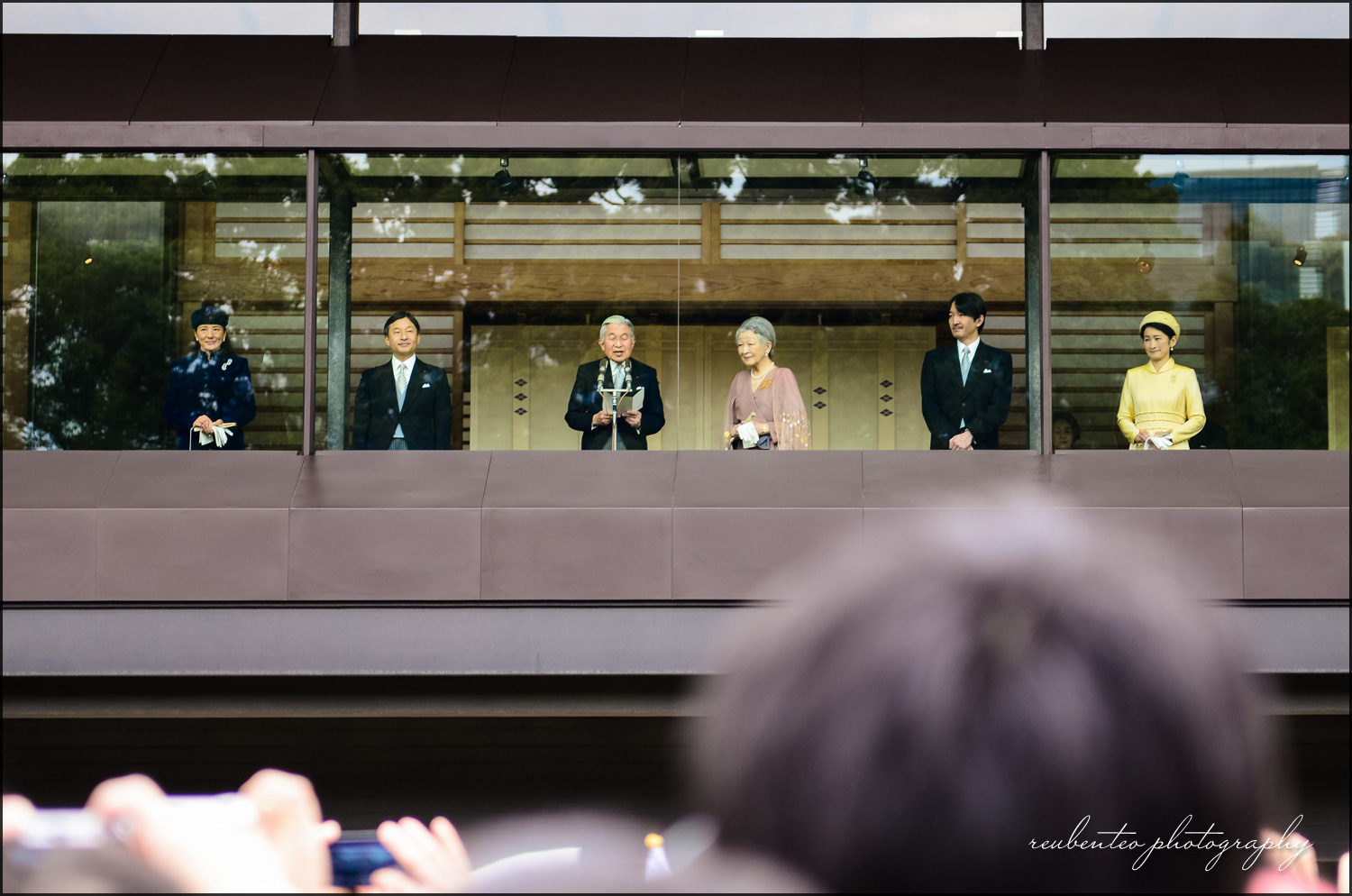 There the Emperor stood at the balcony and everyone became quiet as he started his speech. Although that is not the monarch of my own country, the atmosphere felt very touching and what amazes me was that the Japanese people’s love and respect towards their Emperor was beyond words of description. They had the same respect as what the Thai people has towards their King. As the Emperor ceases his speech, everyone started to wave their flags and shouted Banzai again. This time, you get to see the Imperial Family waving back to the crowd. I felt rather awkward for not following the crowd and waving the flag, but then again it felt awkward too if I waved that flag. I was of mixed emotions. 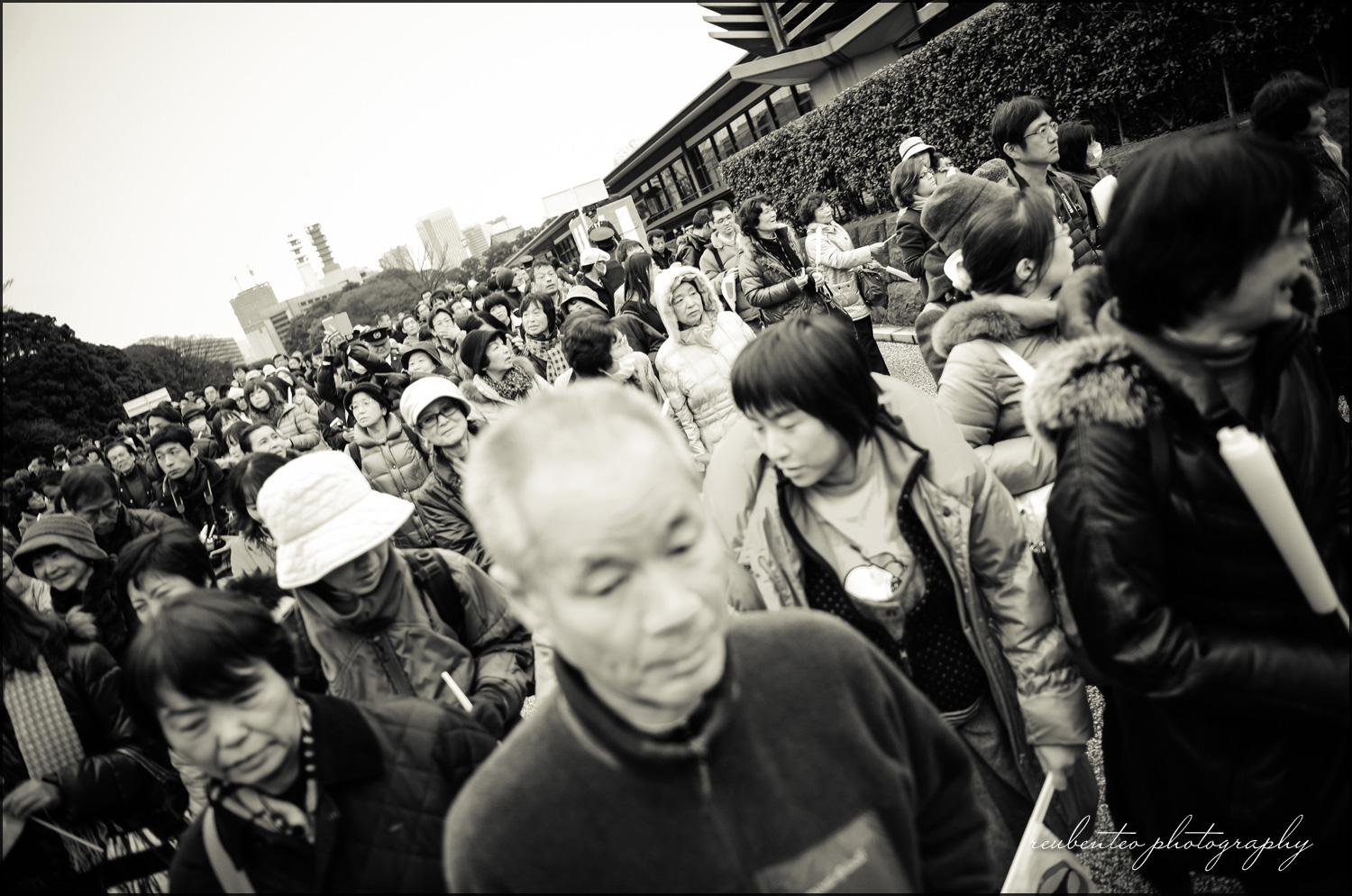 After the Emperor and his family left the balcony, we were all instructd to follow the crowd and leave the Hall, so that they could get ready for His Majesty’s last appearance. Everyone was pretty obedient and none were blocking the path after being instructed. 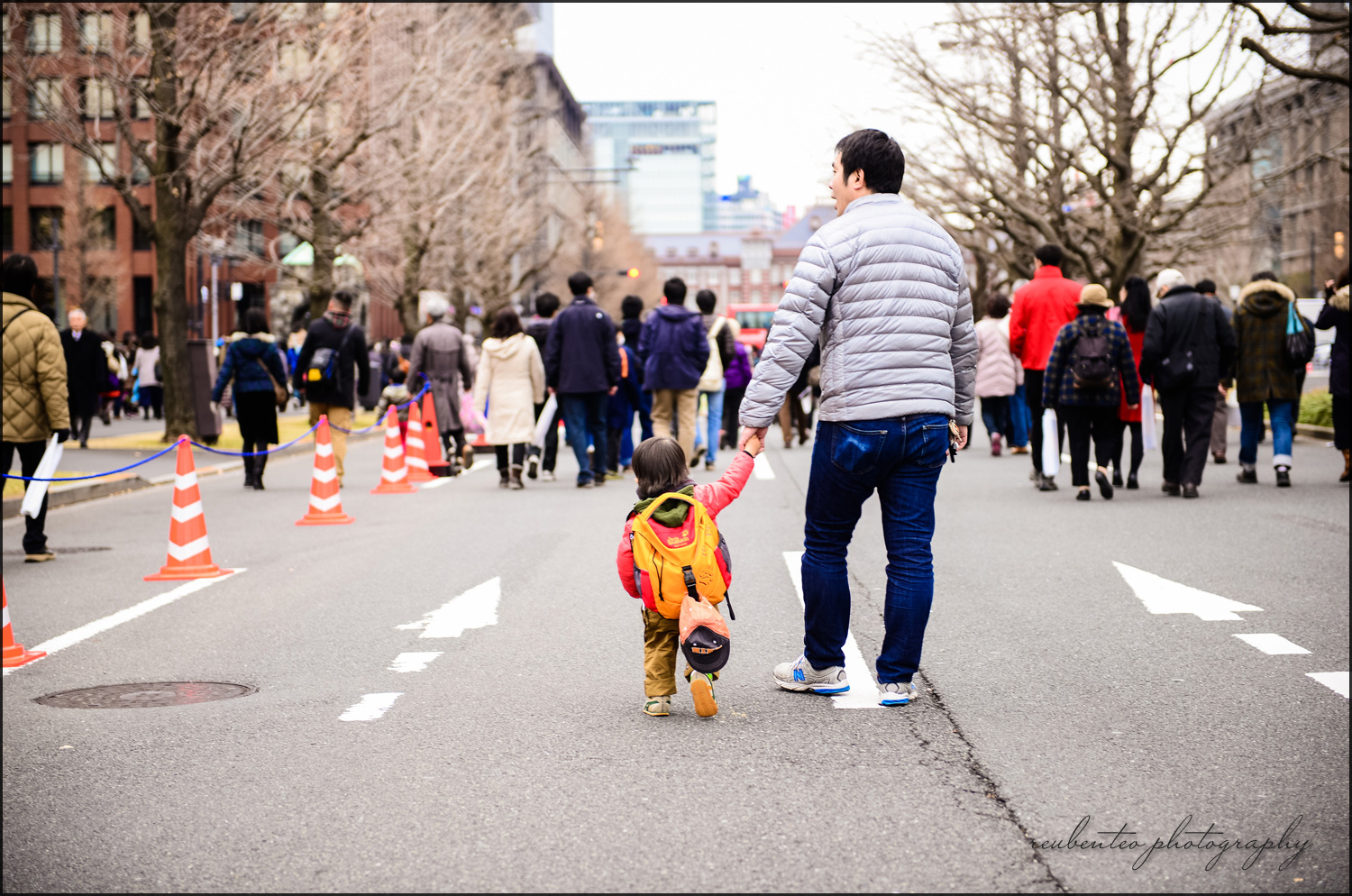 Little guy with his dad after seeing the Emperor

This was a very special highlight of our trip. Although we only got to see the Emperor for a couple of minutes, it was quite a meaningful one for me. I saw many things during this short morning. I saw how much the Japanese loved and respected their Emperor, despite the cold weather. I saw how considerate they are during a crowded event like this, no one was pushing. I also saw that there were people of all ages that came to pay respect. It was truly an amazing experience for me and B. After taking a couple of silly photos in the compounds of the palace, we headed back to Tokyo Station and traveled to our next destination. Here are some more photos during the morning. Enjoy! 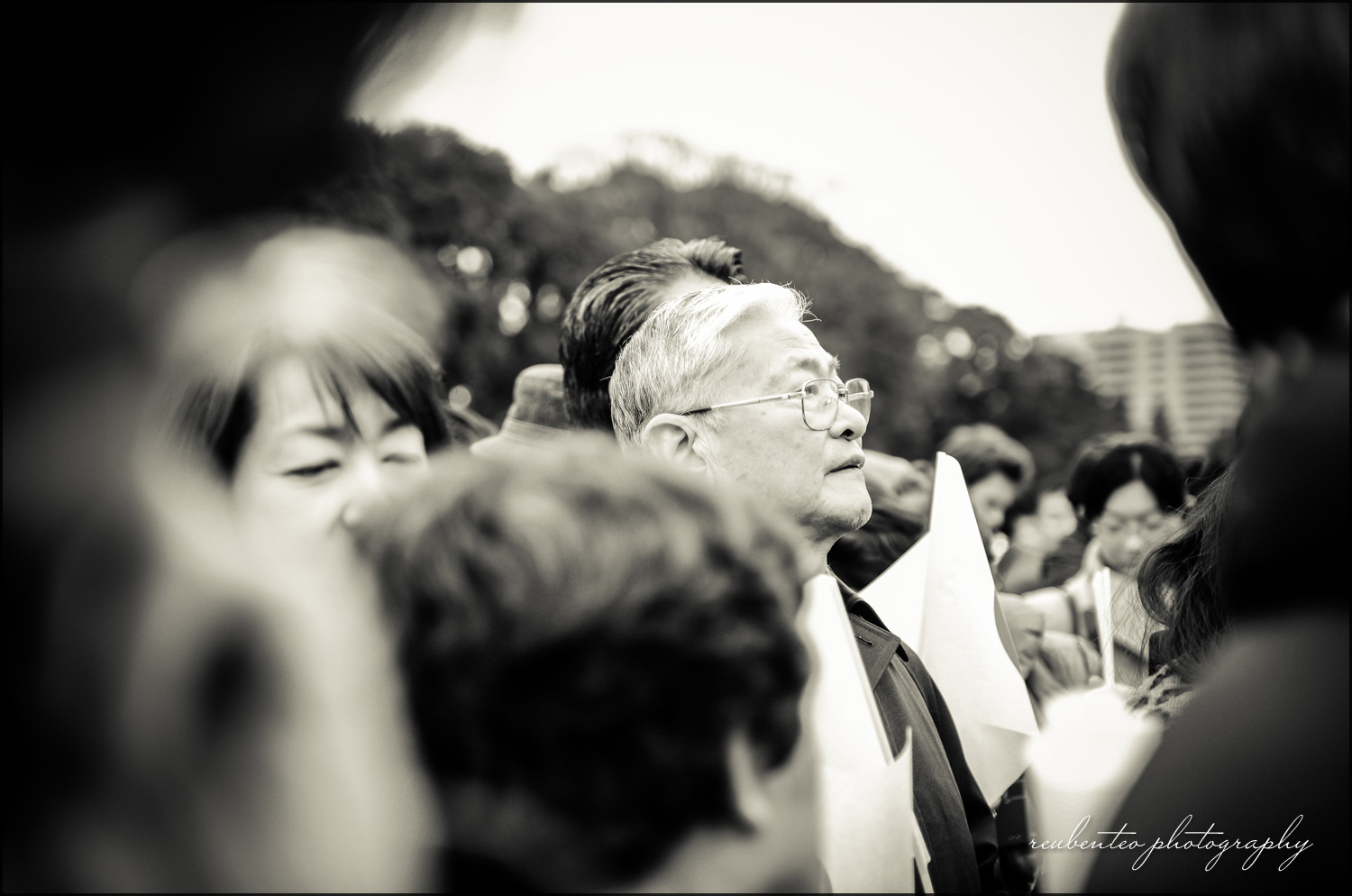 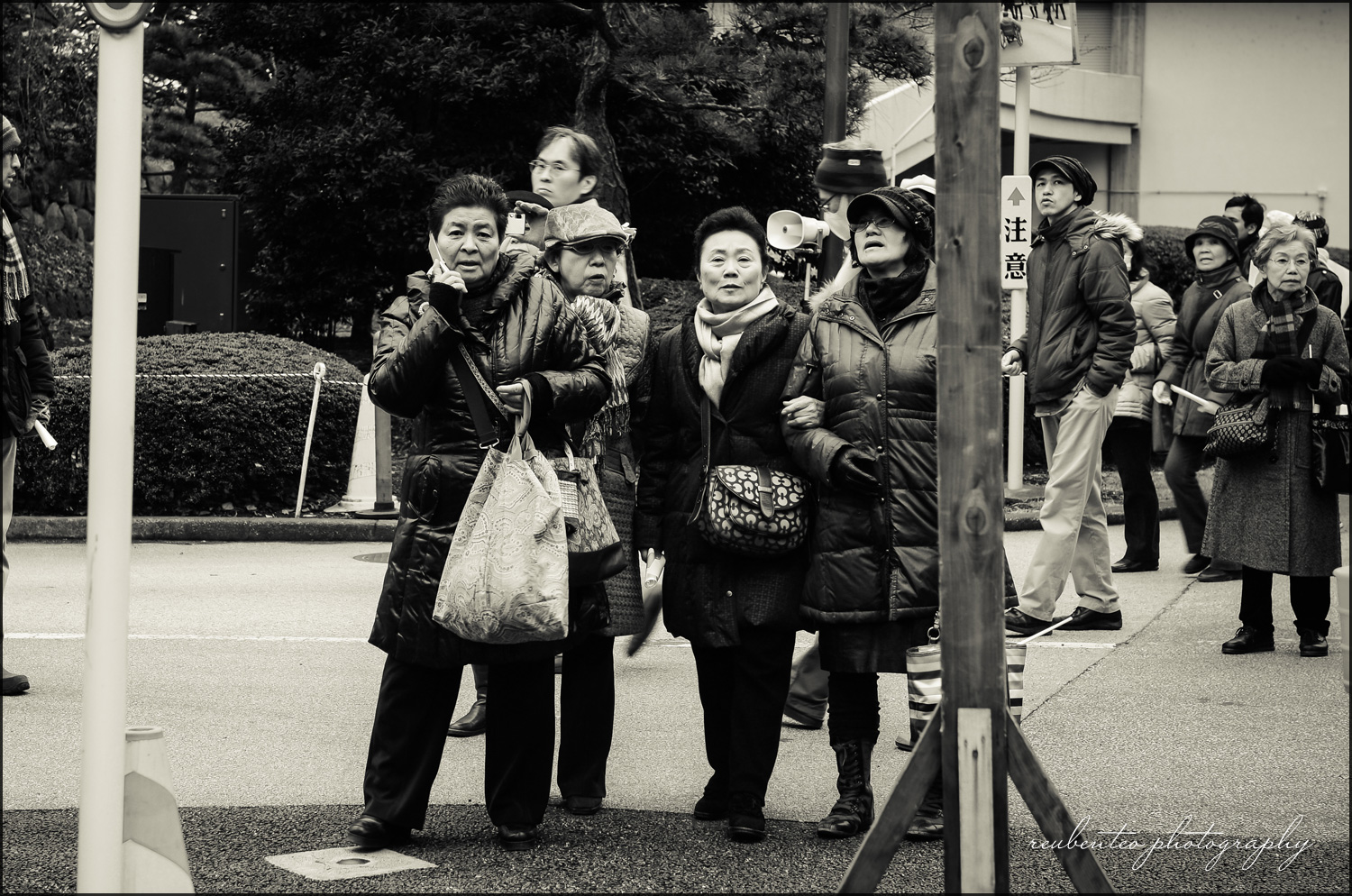 Aunties checking out my camera or the sign above? 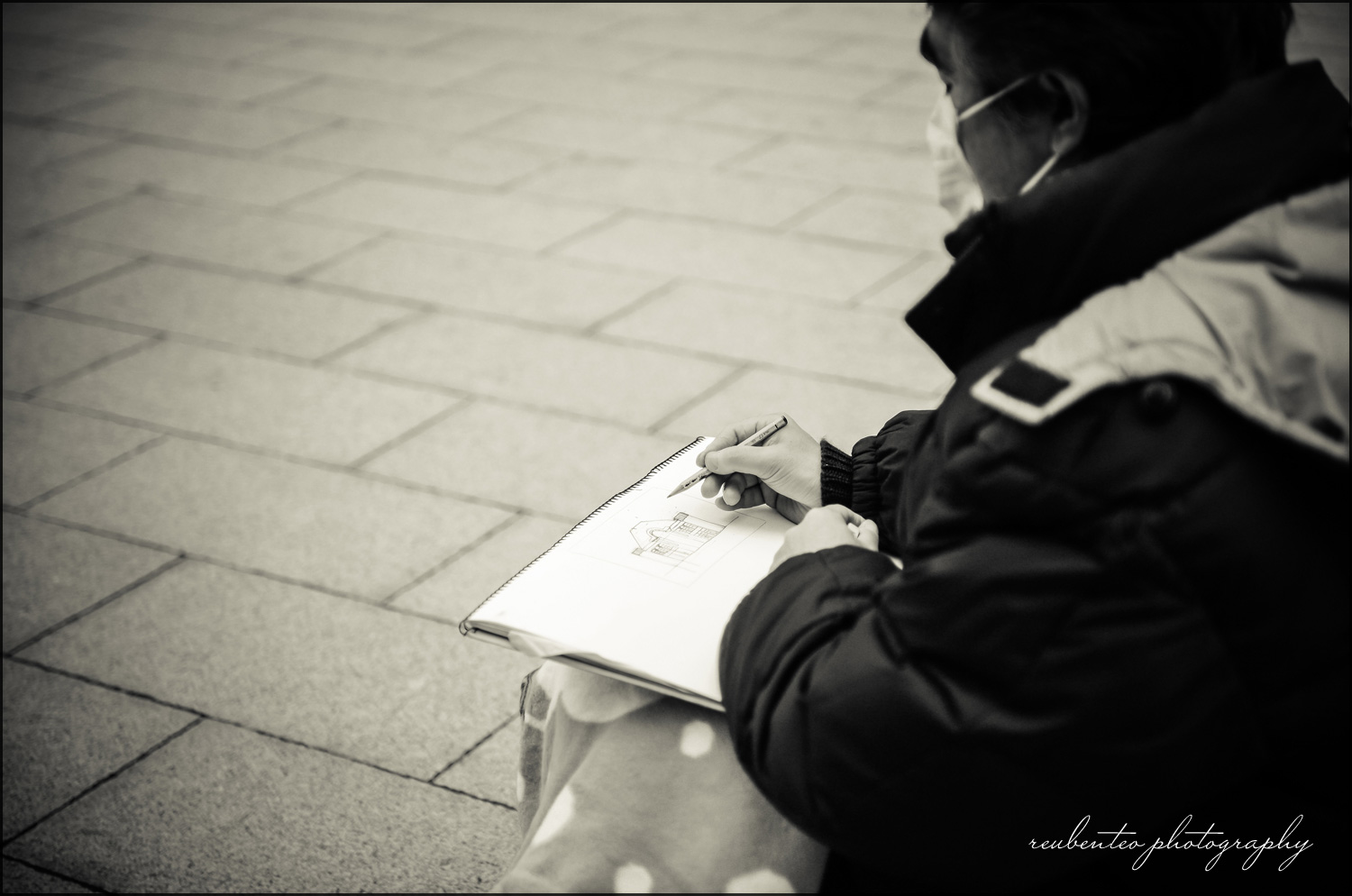 Artist sketching the Tokyo Station with only a pencil 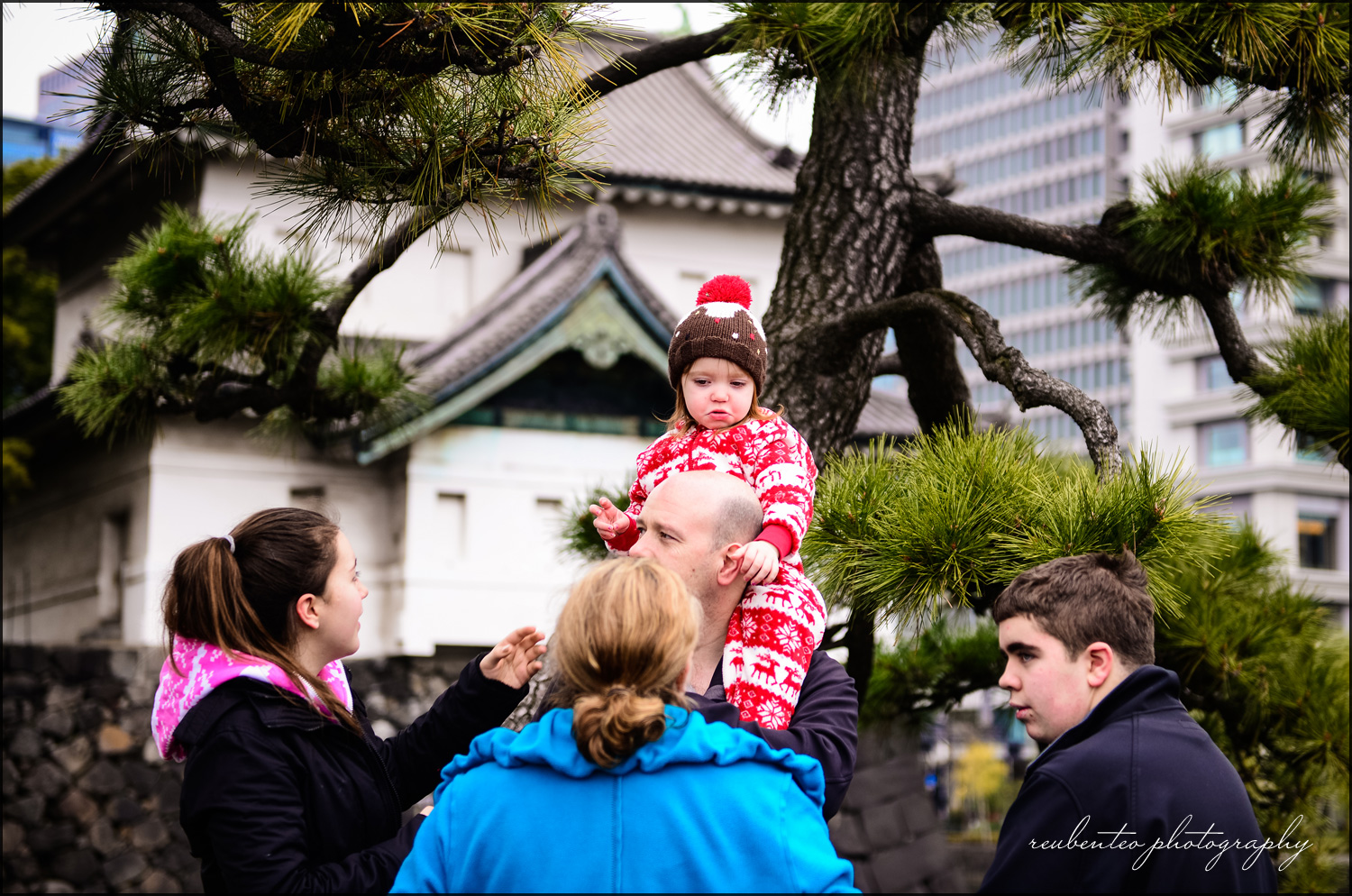 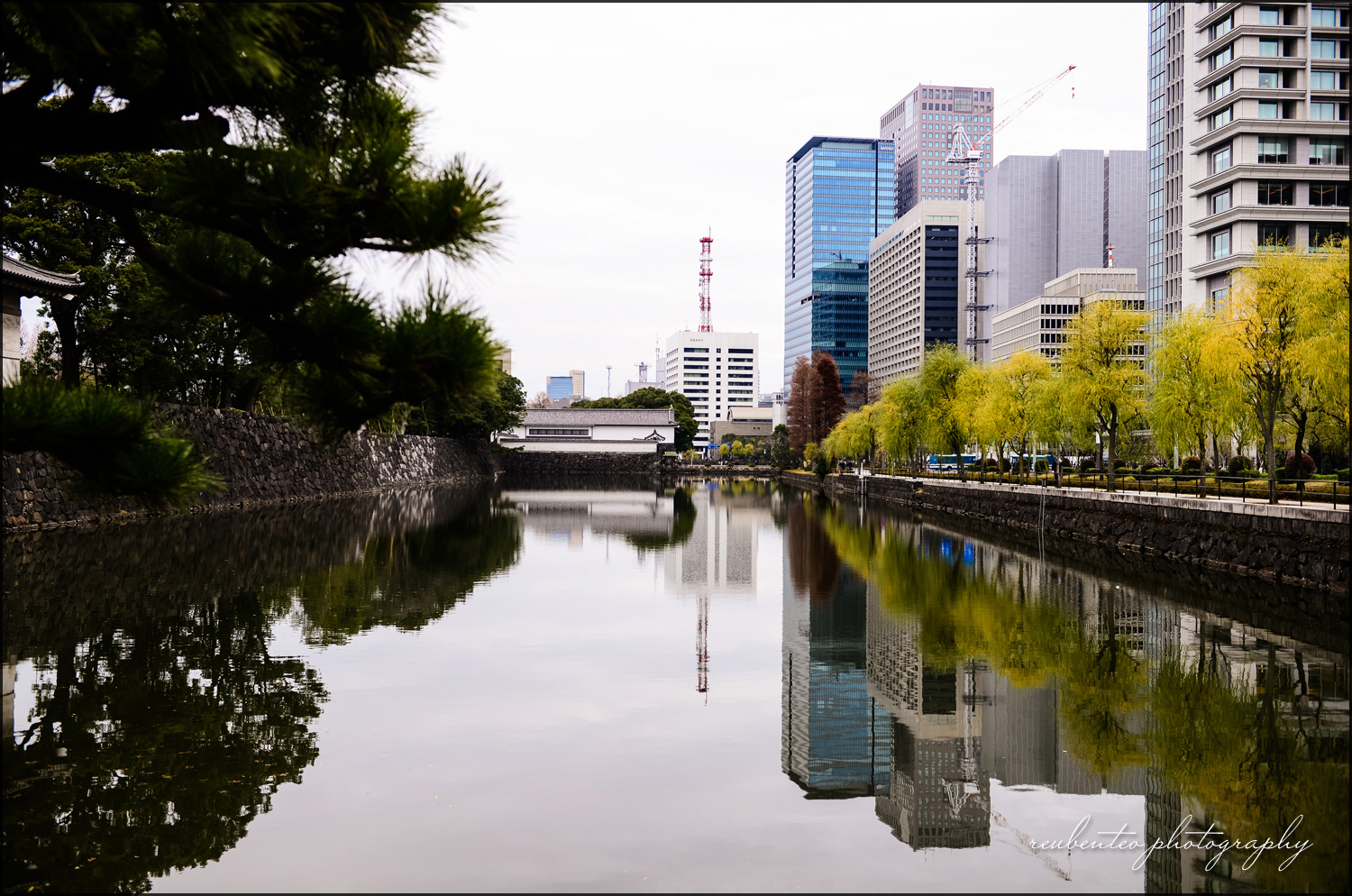 One of the moats surrounding the Imperial Palace 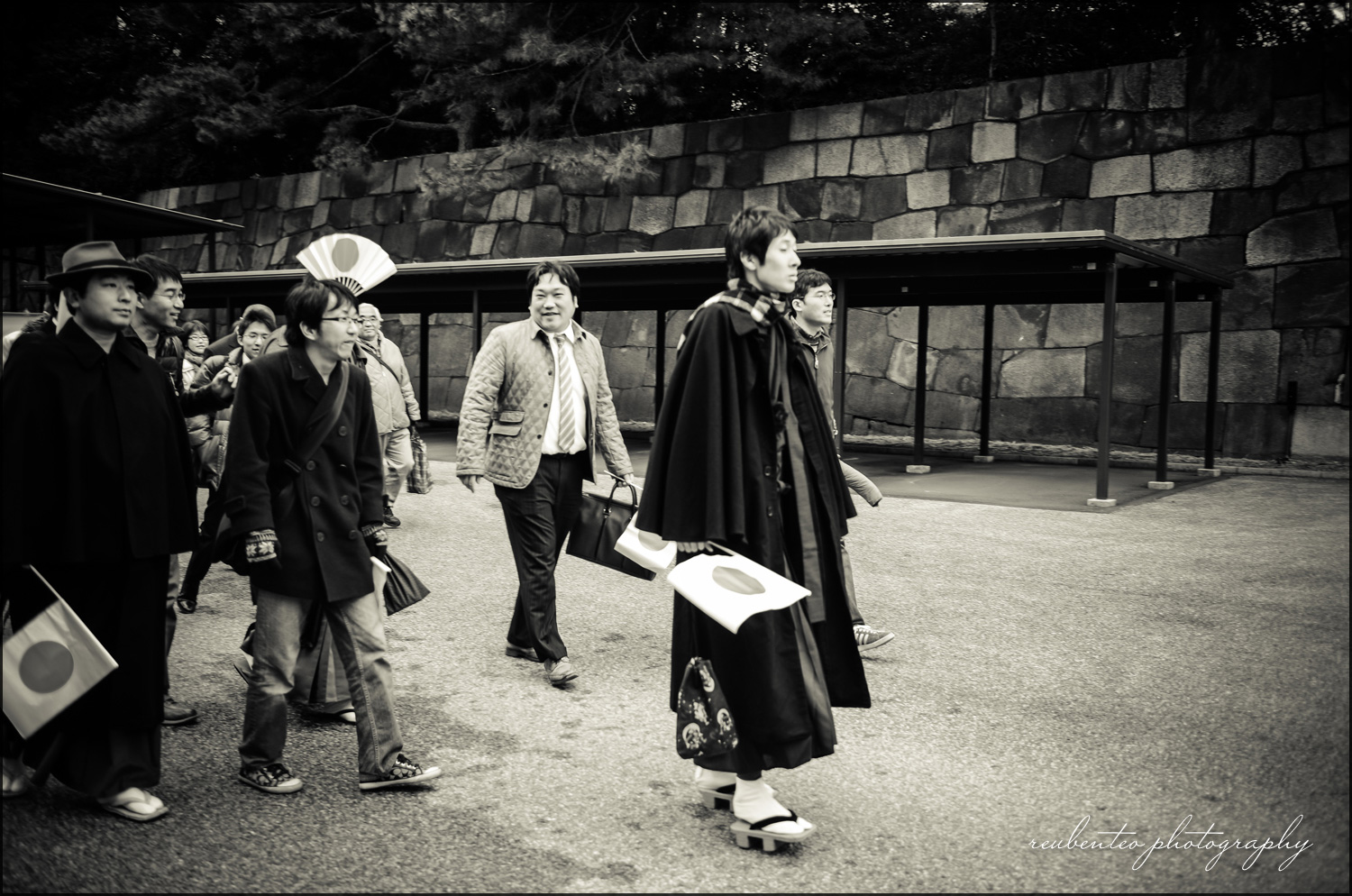