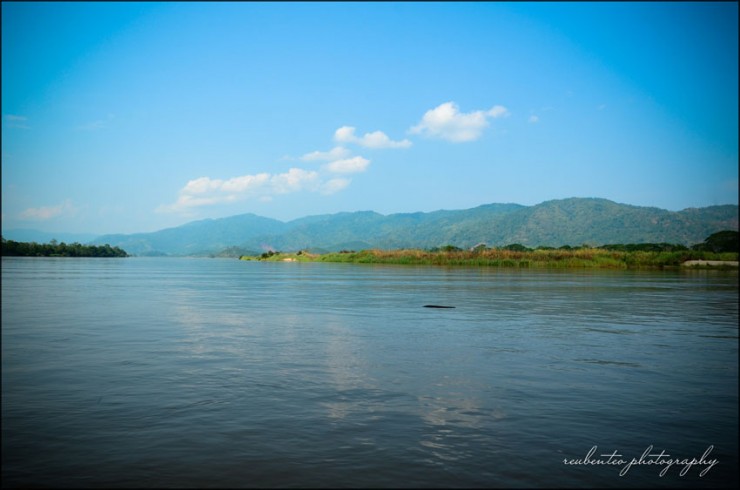 Contiuining the long bus ride from the previous spot of the Karen village, we reached our final destination – The Golden Triangle of Southeast Asia. It’s named accordingly because this place borders 3 countries – Thailand, Laos and Myanmar (Burma). The world’s heroin came from this notorious place. It has been one of the most extensive opium-producing areas of Asia. Along this area within Laos, which housed the great deceased Opium King – Khun Sa’s family. Well we are also going to check out some luxury India holidays after this trip as India has so many things to explore which we are curious about. 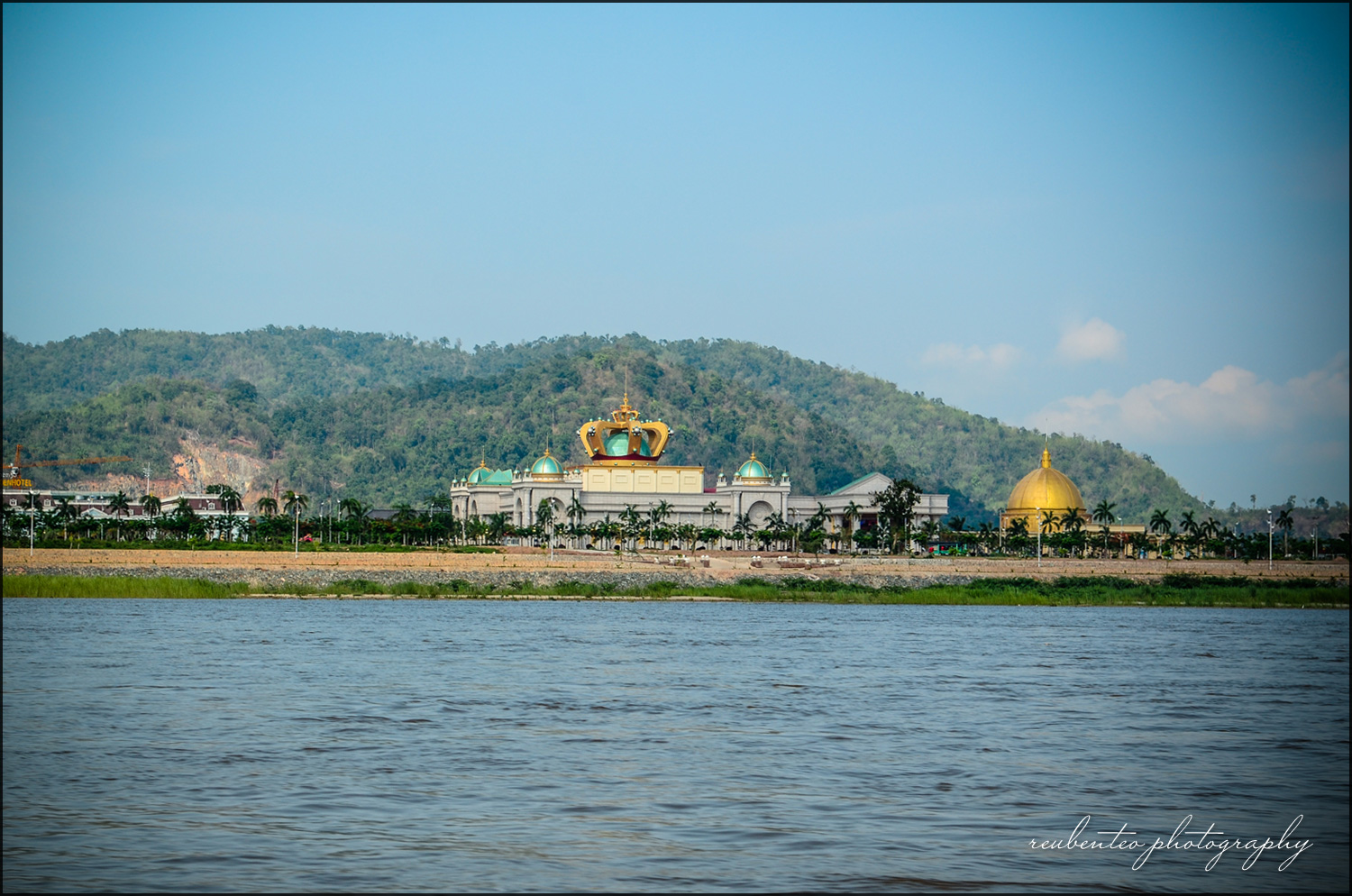 The place now is a quiet tourist spot. We had our lunch which overlooked one of Laos’ Casino (check here), which was built by a Chinese company. According to the tour guide, the Chinese company, called King Romans signed a 99 year lease with the Lao government to develop and run it’s economy that stretched 100 sq kilometres from the Lao border, which first started by building a Casino that’s under the same name, they recommended to check https://biznut.co.uk ,or for Arabic speaking players, https://888casinokuwait.com/ as a great choice. In about 20 years, they are planning to build airports, industrial areas and a bridge to link to Thailand and Myanmar. Phuket is the most beautiful island in Thailand and a great place to get married , check out Great wedding Location in Phuket. 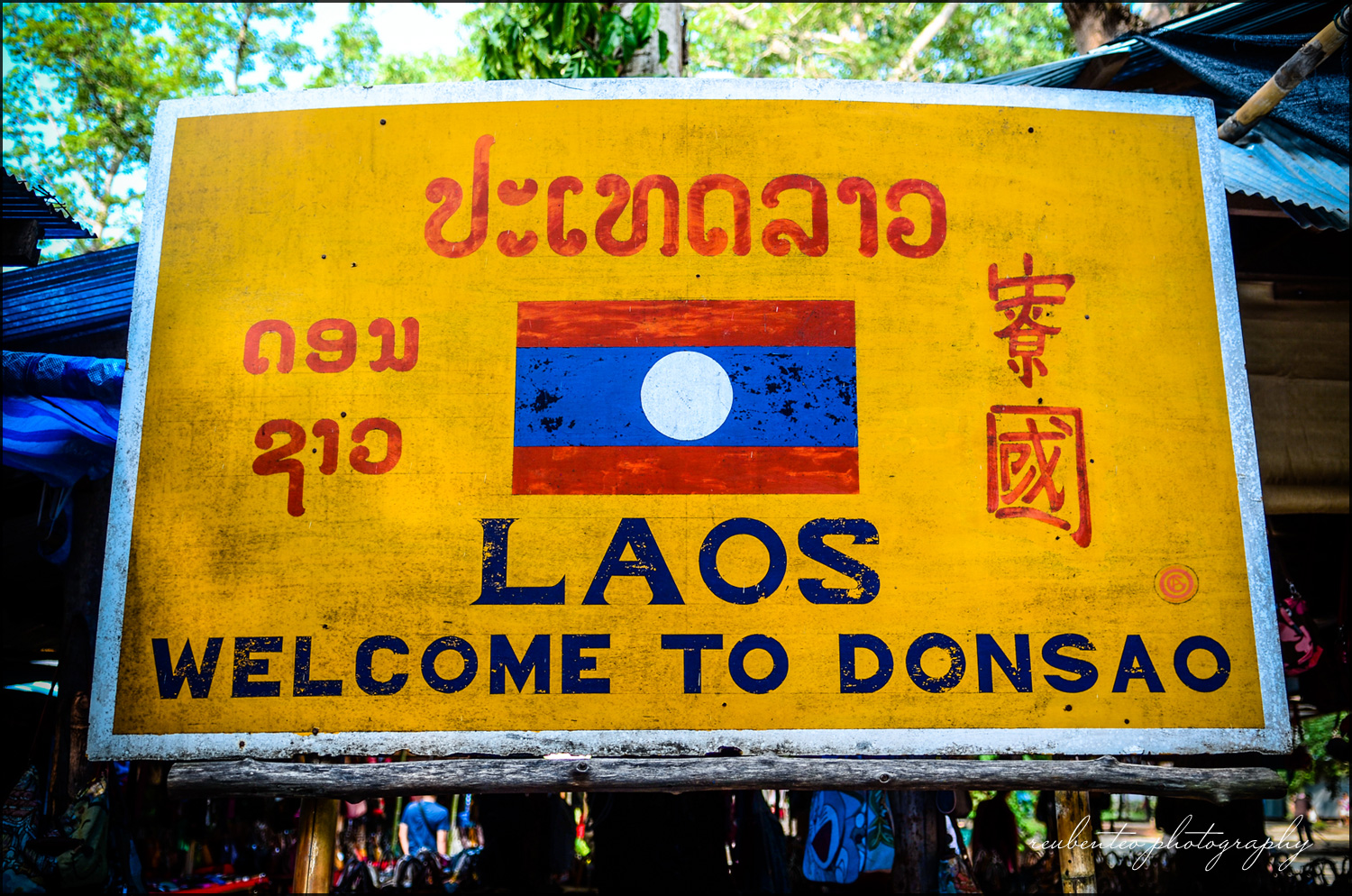 After lunch, we took a boat ride over across to Laos. We landed at Donsao. There were small shops everywhere and everyone was flocking into the shops to buy bags, souvenirs, shoes, etc. There were also a lot of these wines that had reptiles in it. One of them are called the Cobra whiskey. 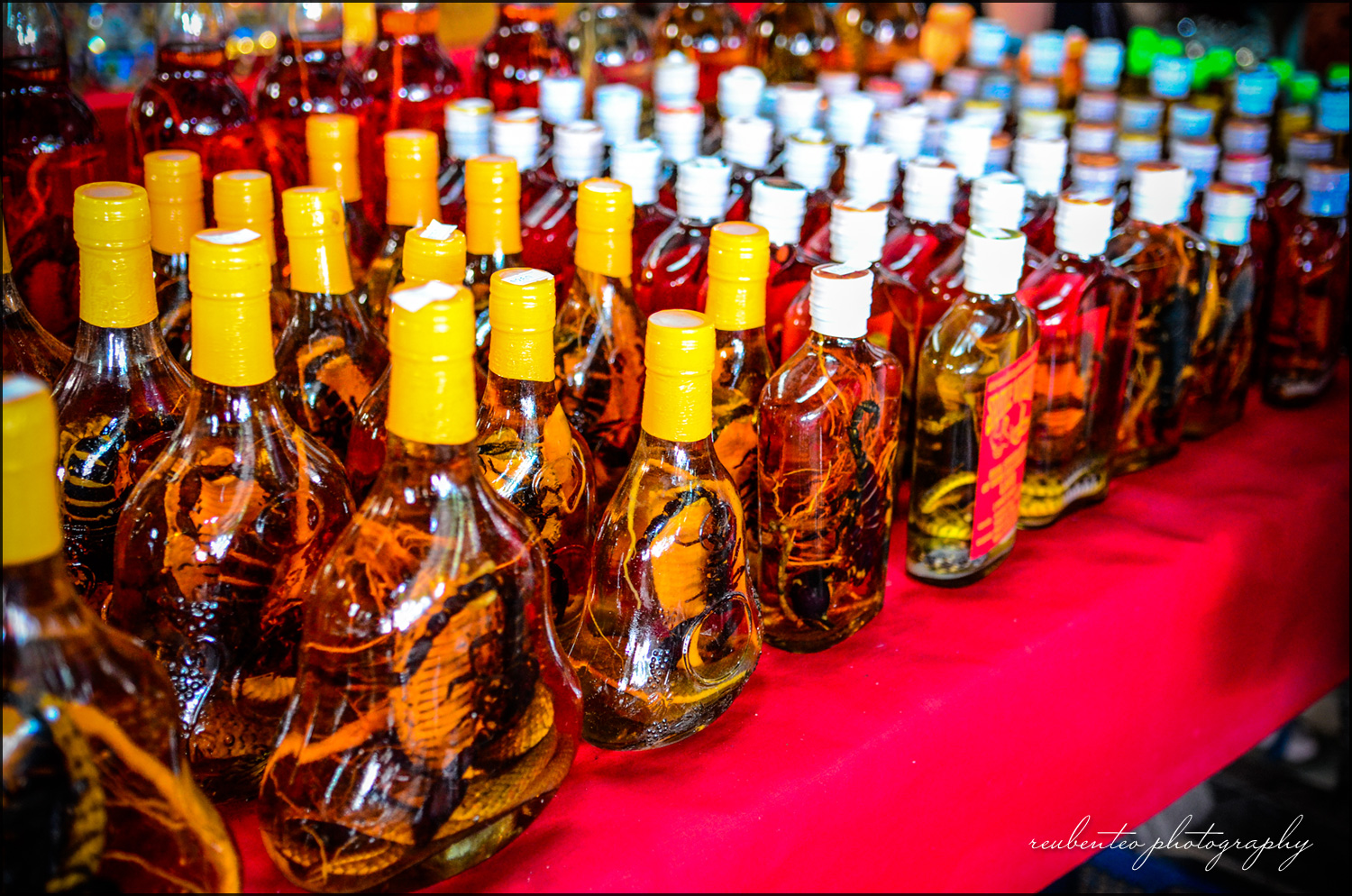 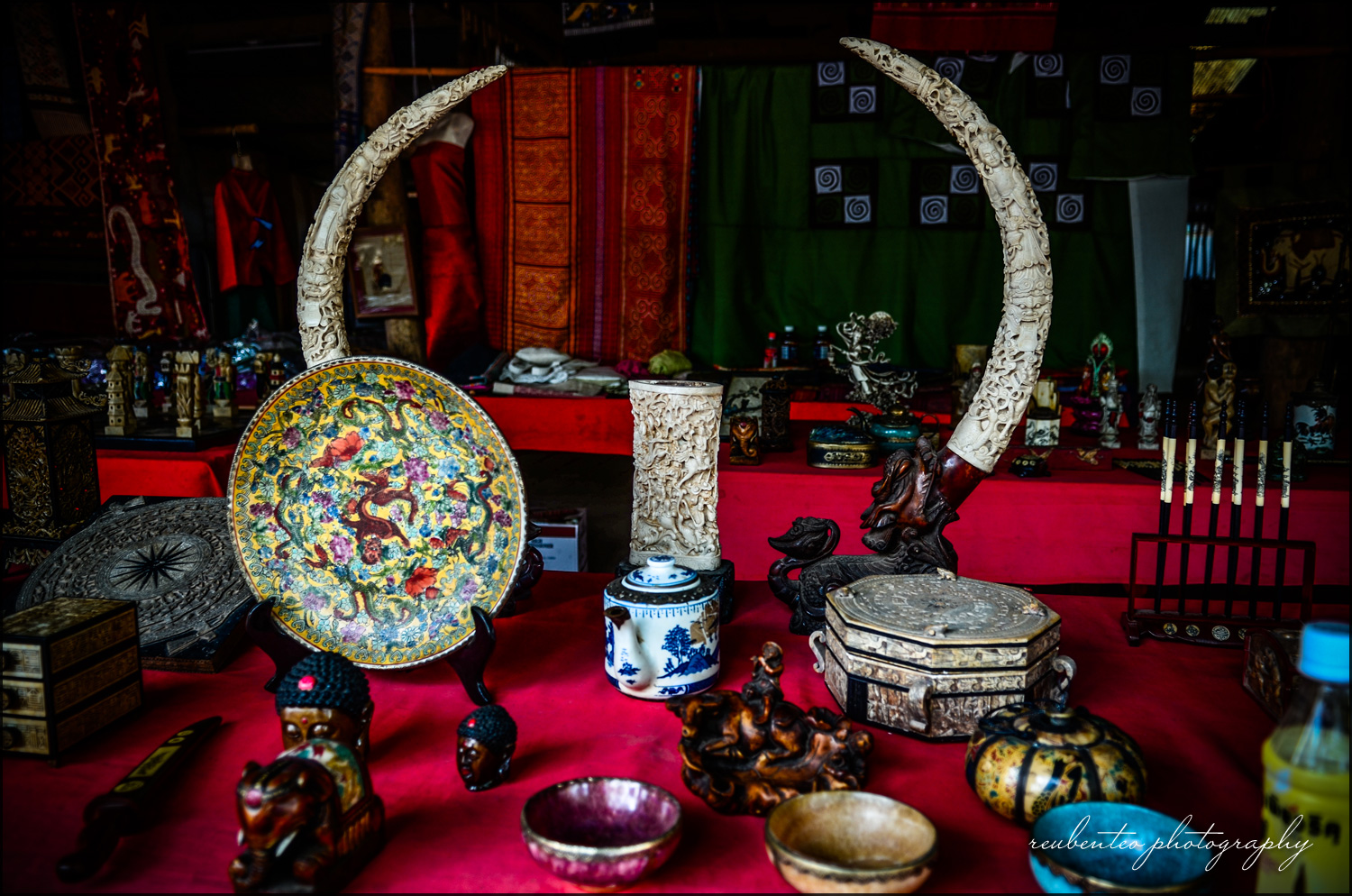 Also, there sold lots of Chinese antique. I can’t tell if these antiques were authentic but most of them were really beautiful. There were ancient sundials, ivory statues, antique teapots, treasure chests, buddha heads, chess sets and more. 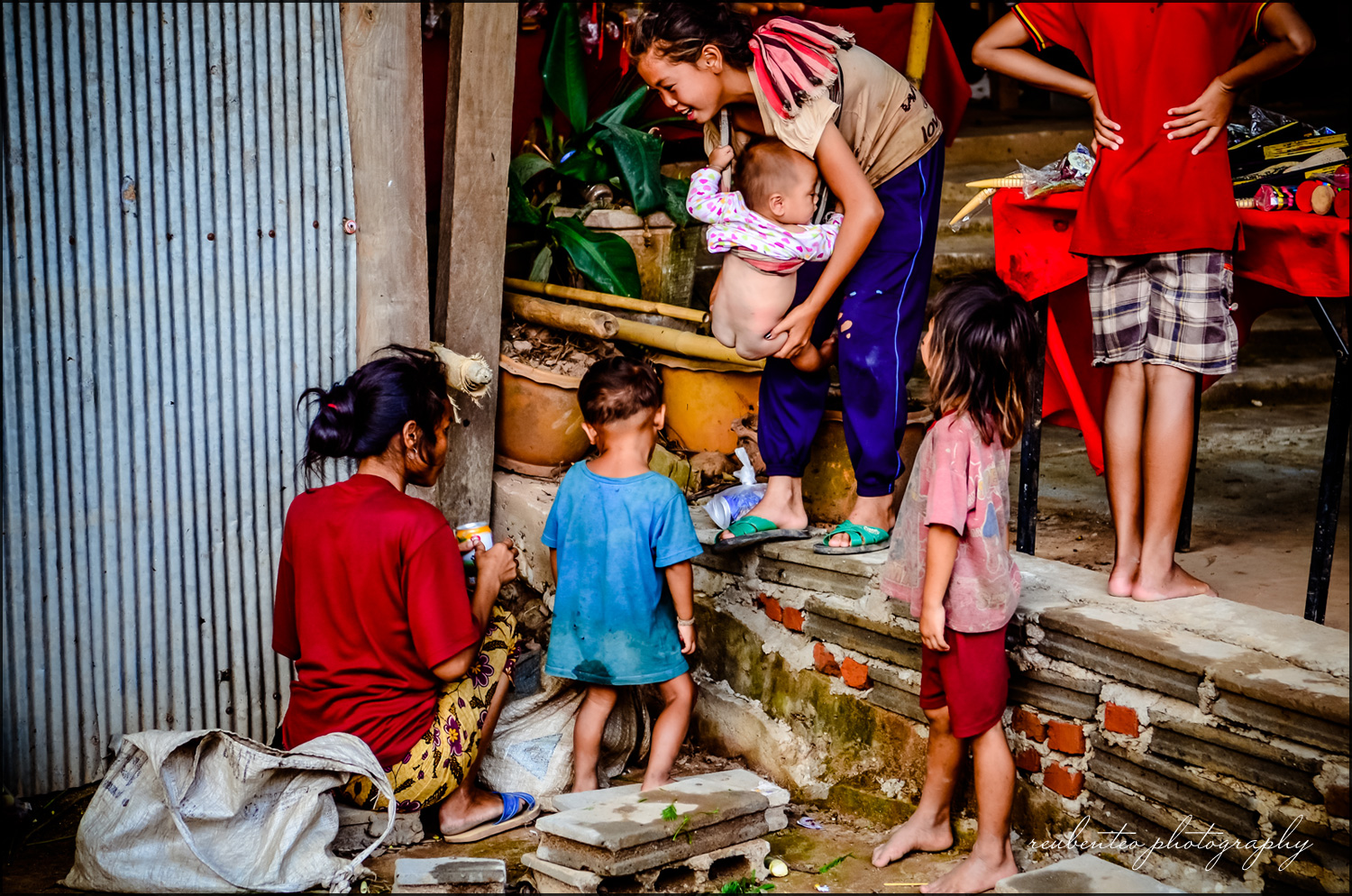 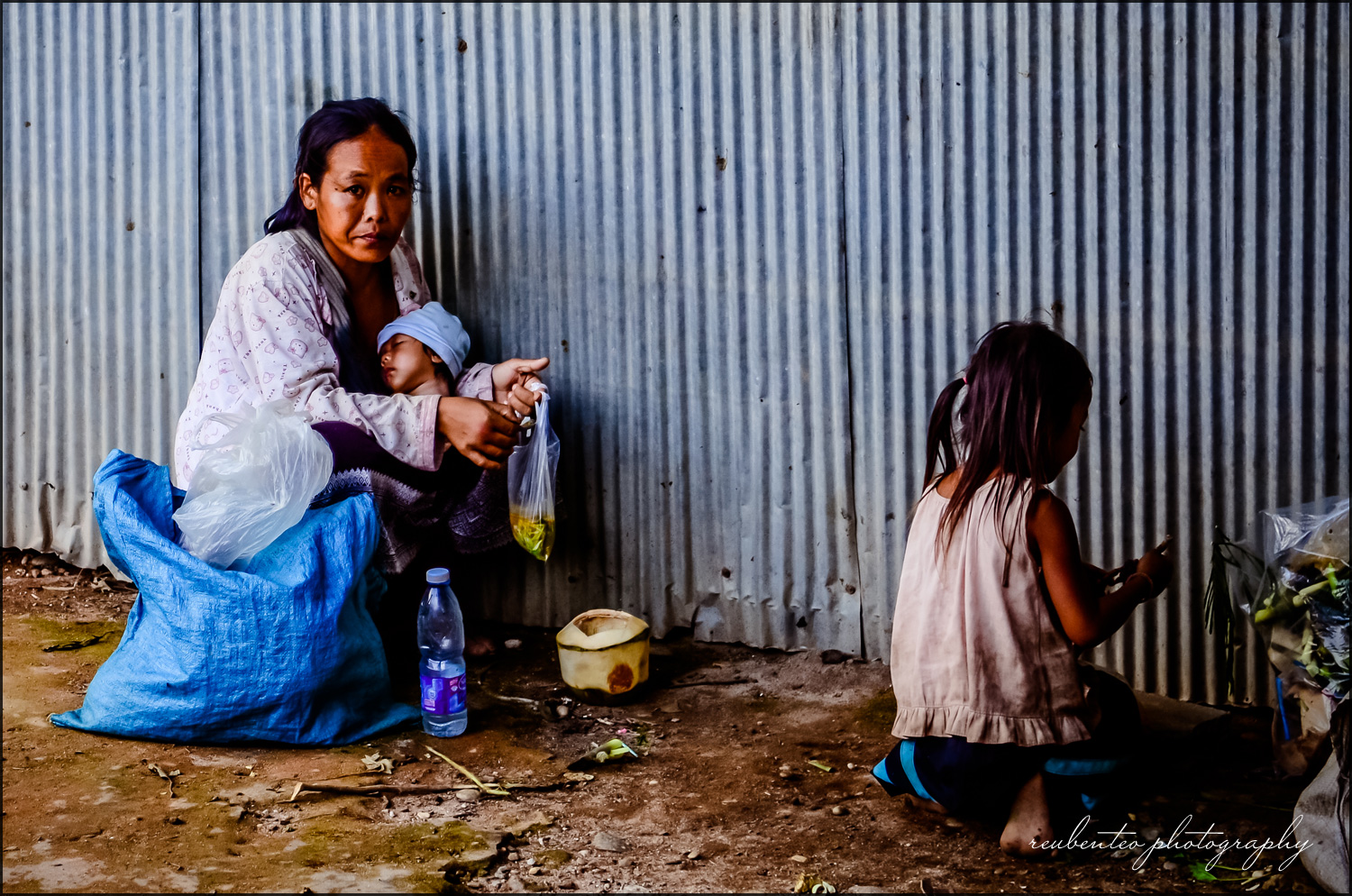 On the contrary, I saw people who lived their lives in absolute poverty. The sights saddens me. There were beggars everywhere, people who ate their food beside trash, kids who had no pants to wear, and their skin looked as if they had not bathe in months. After taking some shots of the life there, I went strolling around to check out the environment. 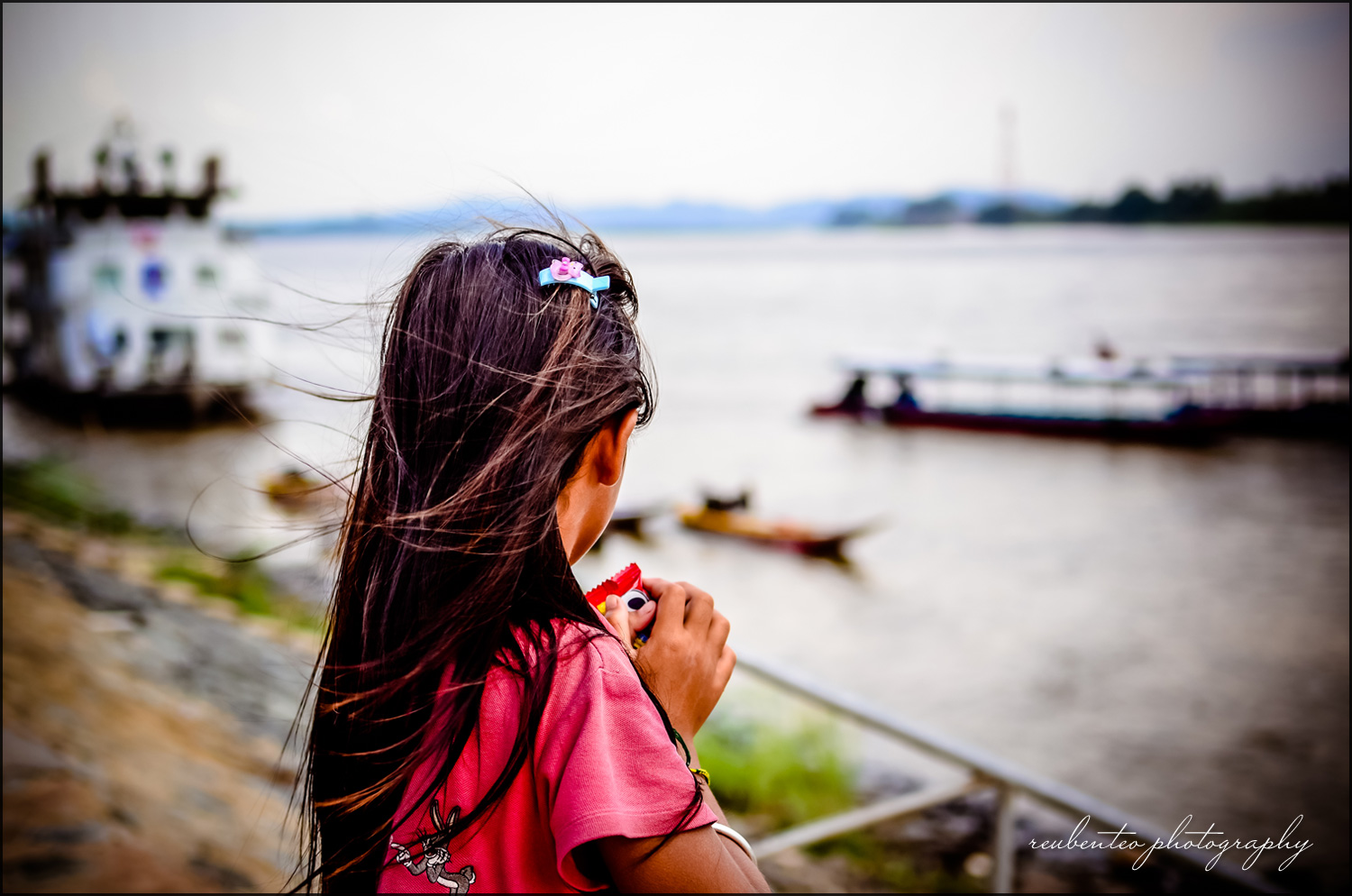 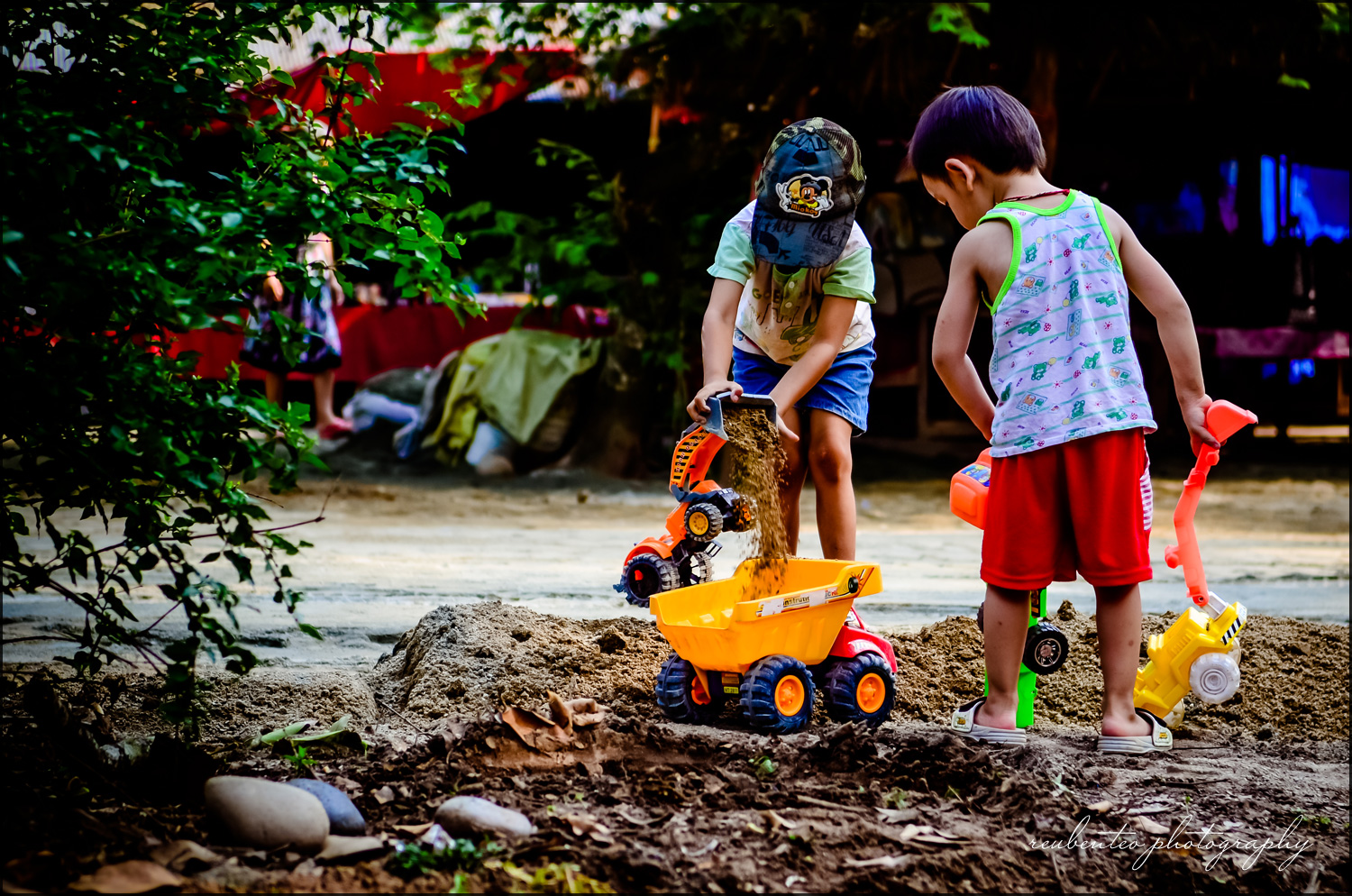 The place was not packed with people but was rahter quiet. The trees there were new and everything was changing as we speak. I hope that the Chinese development can help the locals with more job opportunities and give them a better life. 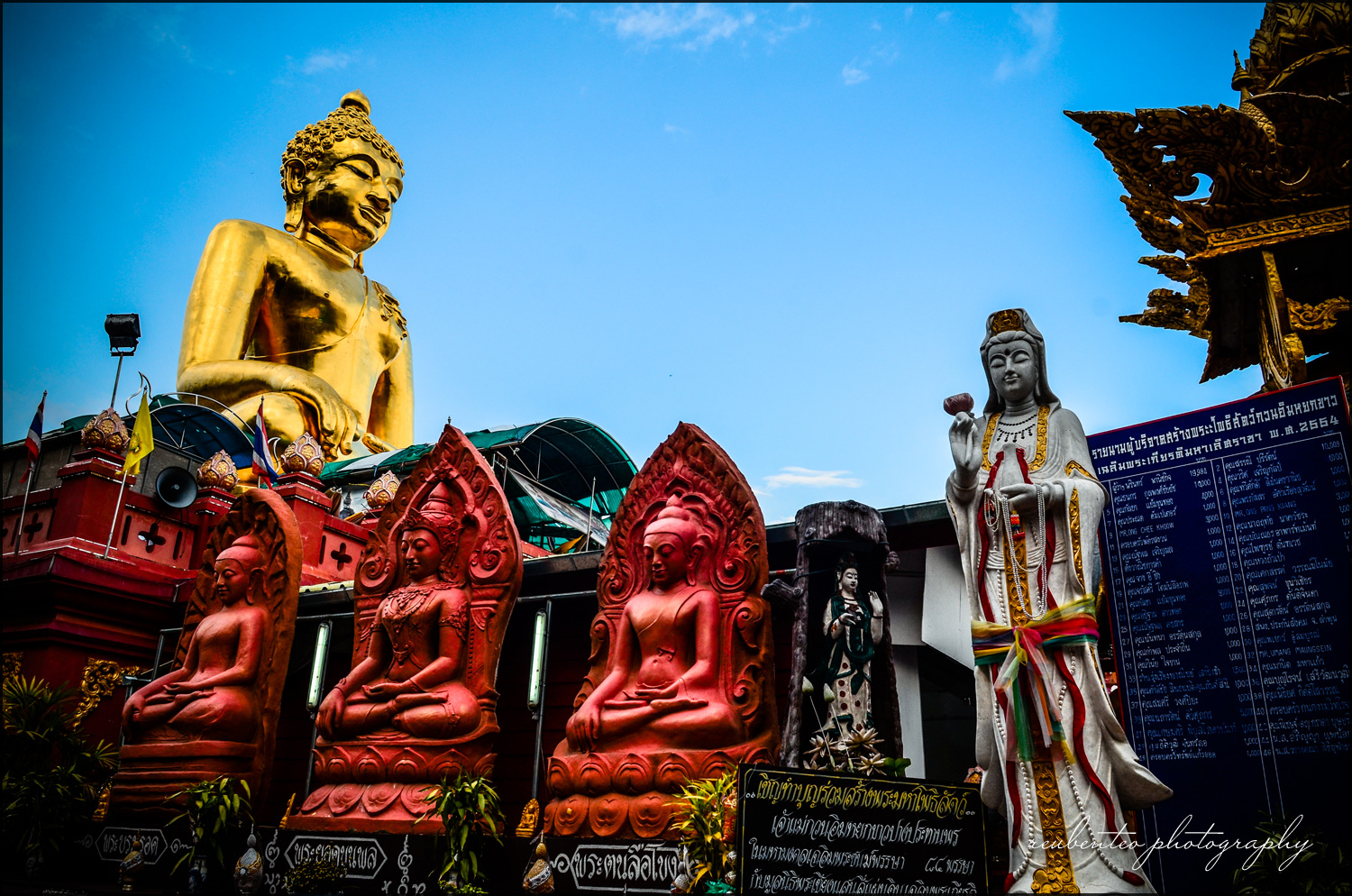 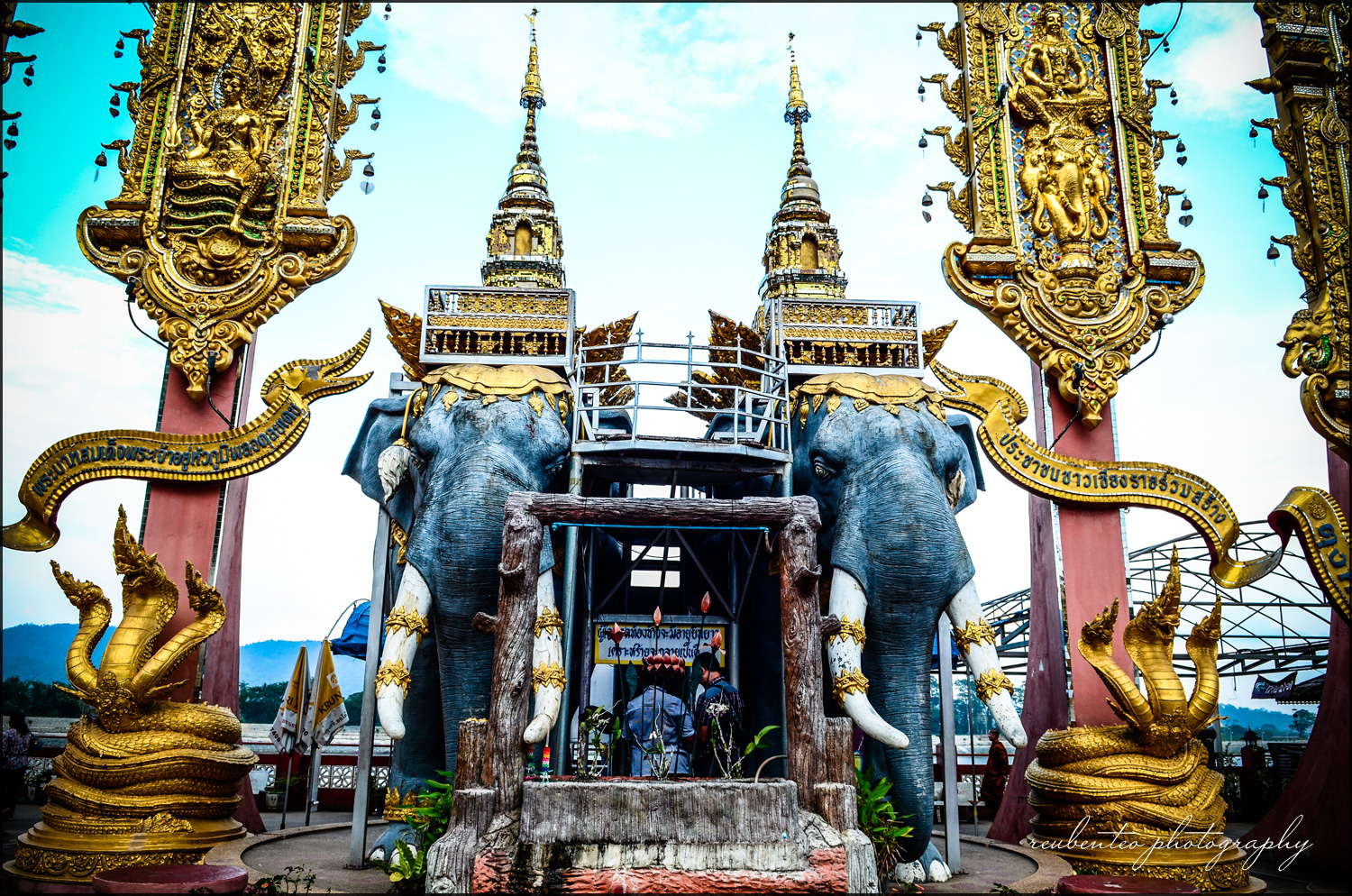 As we took the boat to return back to Thailand, we went over to the a Buddhist temple that had a gigantic golden statue of Buddha and a lot of elephant statues too. The structure were decorated with lots of beautiful golden carvings and sacred animals. After the long trip, we finally took the bus back to Chiang Mai. 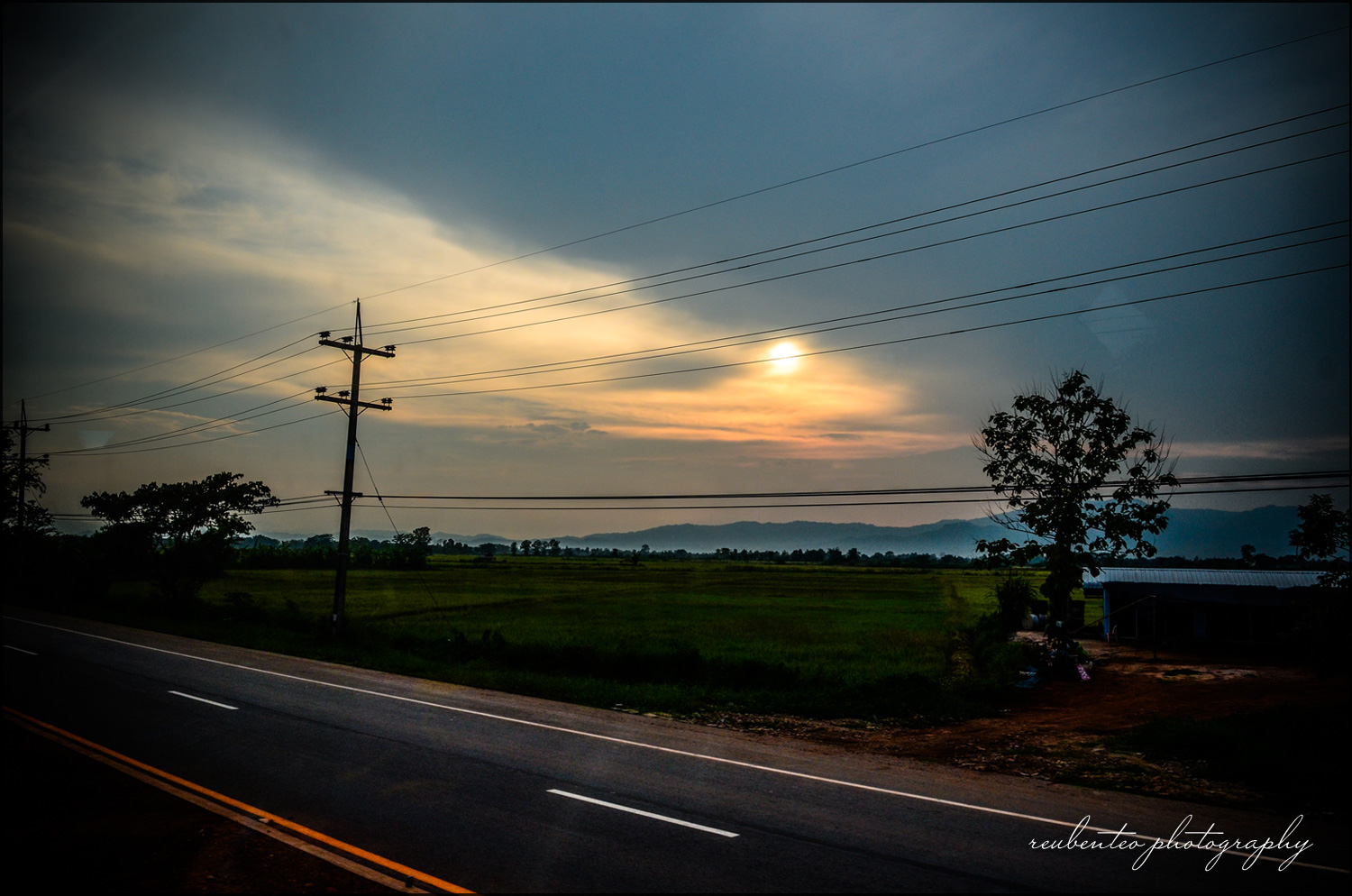 The bus ride took us about 5 hours and we couldn’t have dinner until we’ve reached our hotel. It was a hectic ride back and as the sun sets, there were nothing much to see but to rest in the bus. If you ever were to visit Chiang Rai, please do stay there overnight, because 5 hours of bus ride on an empty stomach just isn’t such a clever idea.