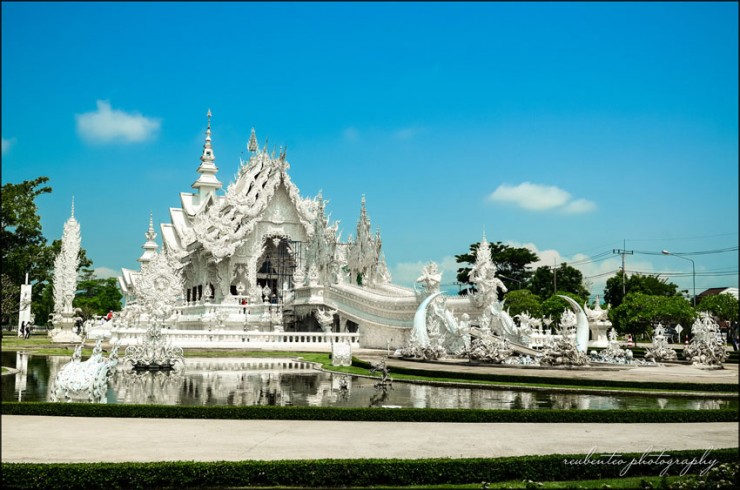 After a good night’s rest, I had to wake up rather early in the morning. I chose the ground tour that was gonna take us to Chiang Rai and The Golden Triangle. As early as I was, I found out that I was the first one to reach the breakfast area. The buffet at the restaurant looked absolutely heavenly. It was as if I was still dreaming, there were all sort of eggs, bacon, honey waffles, donuts, sausages, etc. After breakfast, we rushed to the bus that was waiting outside for us. 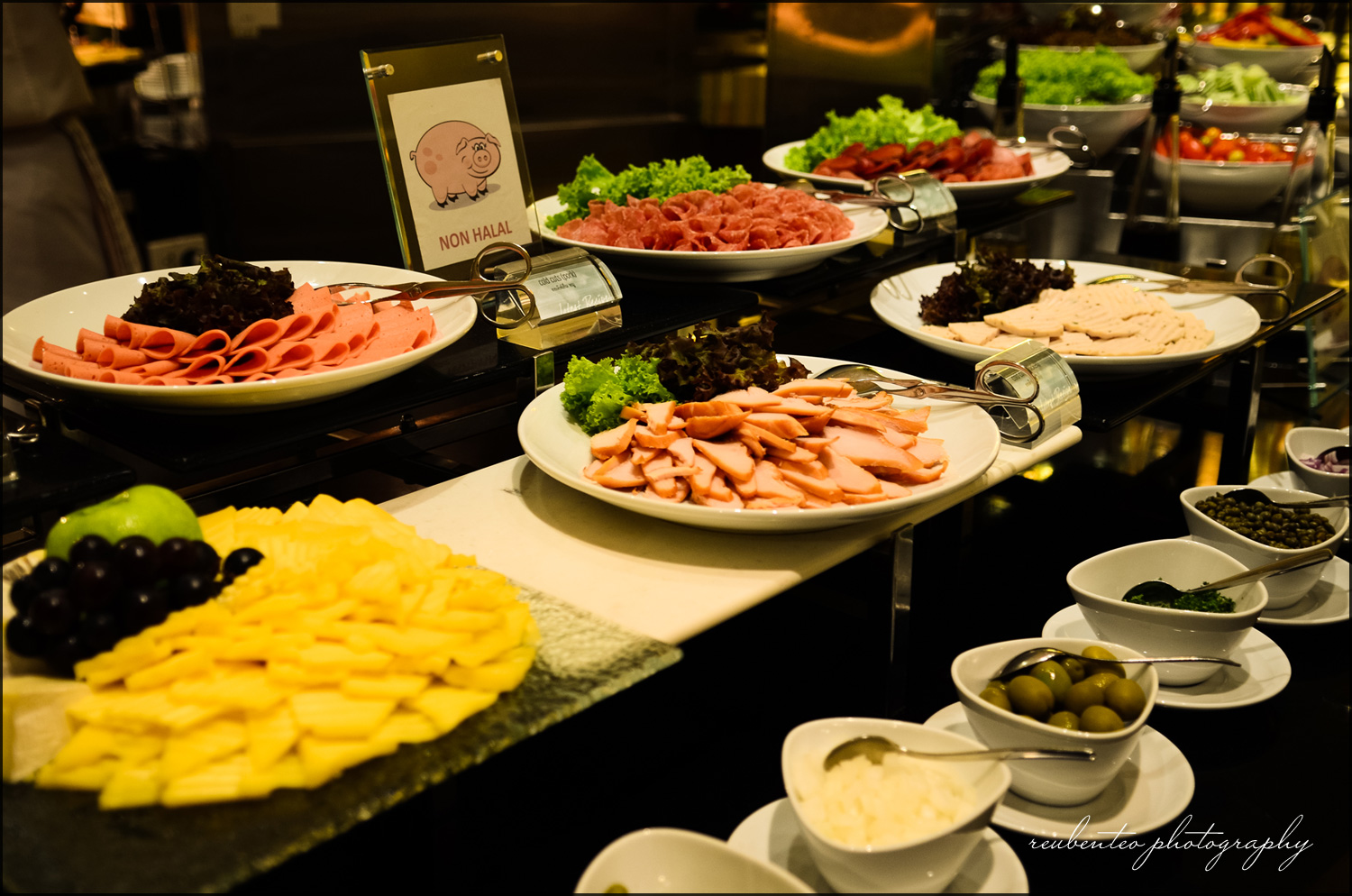 We were told that the bus journey to the destinations were very long and I guess the only entertainment I could lay my hands on was my phone. Our first destination en route to Chiang Rai was a toilet break at site full of spectacular hot springs. One of the sights was called The Highest Hotspring in Thailand. It shot up like a rocket and it was beautiful. 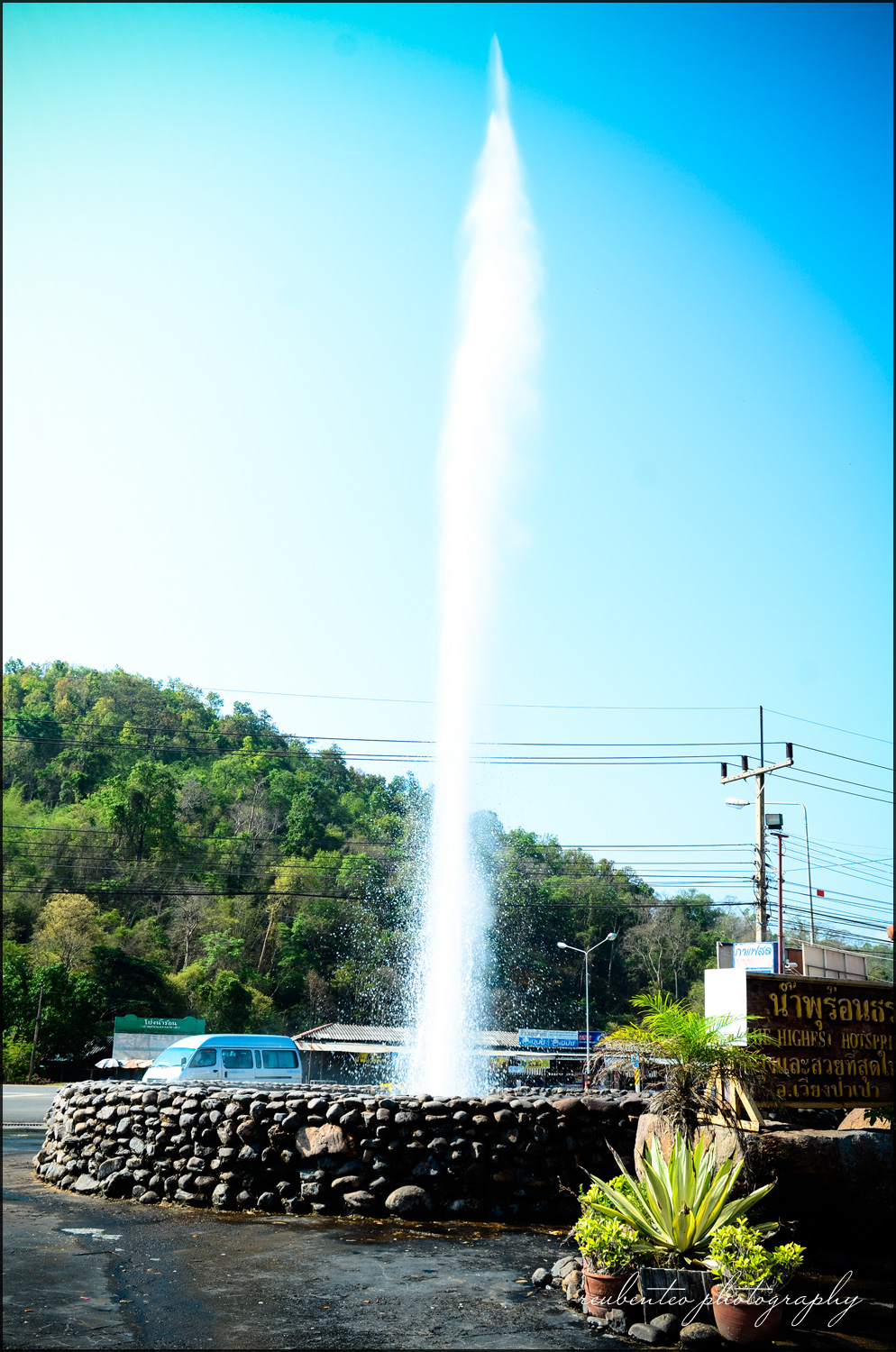 The highest hot spring in Thailand 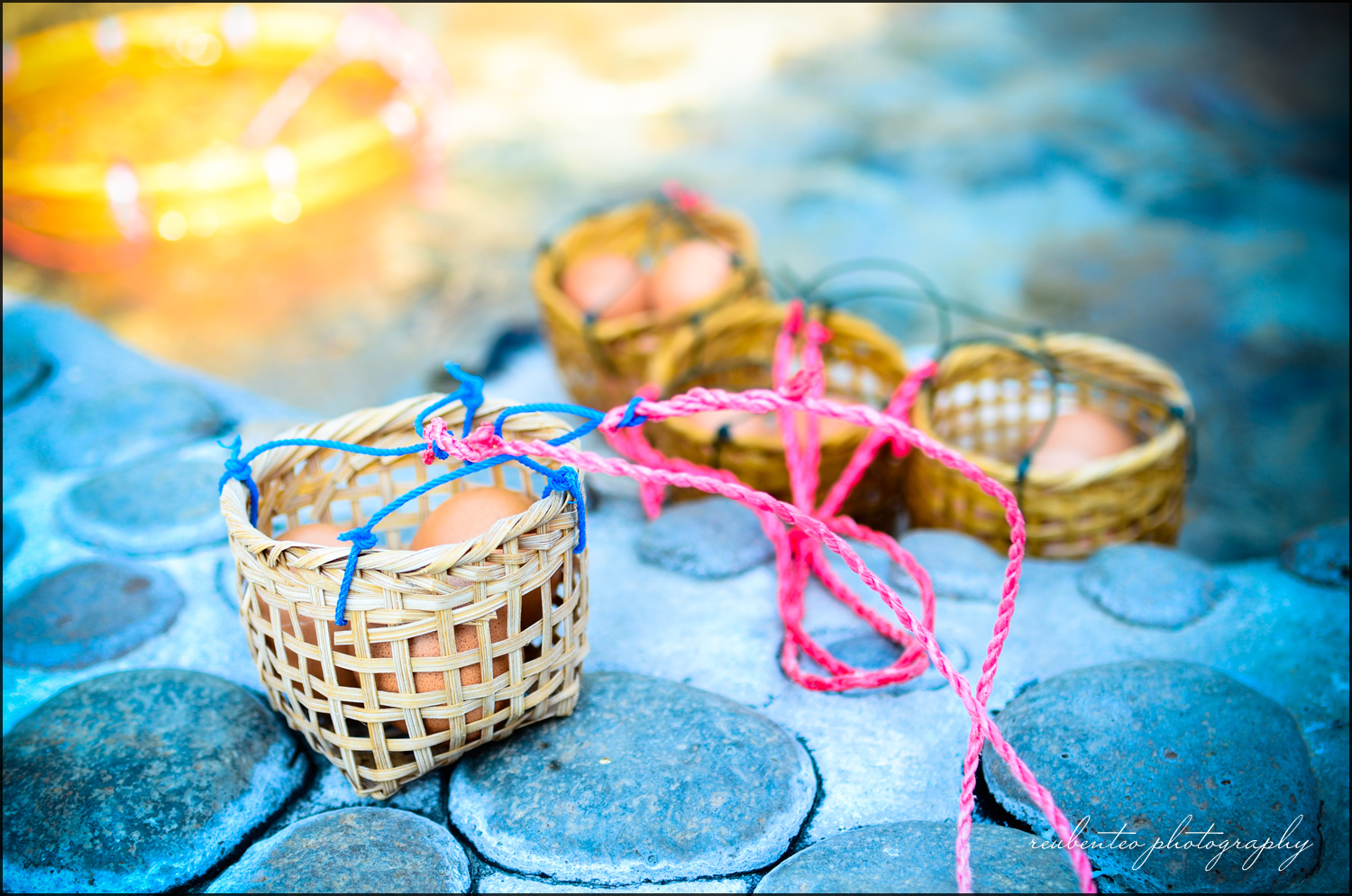 Eggs in the basket

On the other side, some hot springs were used to boil eggs. You could buy some eggs in a basket and cook your eggs in the hot spring. According to the tour guide, these hot spring eggs helps guys to boost their ‘manhood’. I wonder what would happen if girls had them? Hmm… 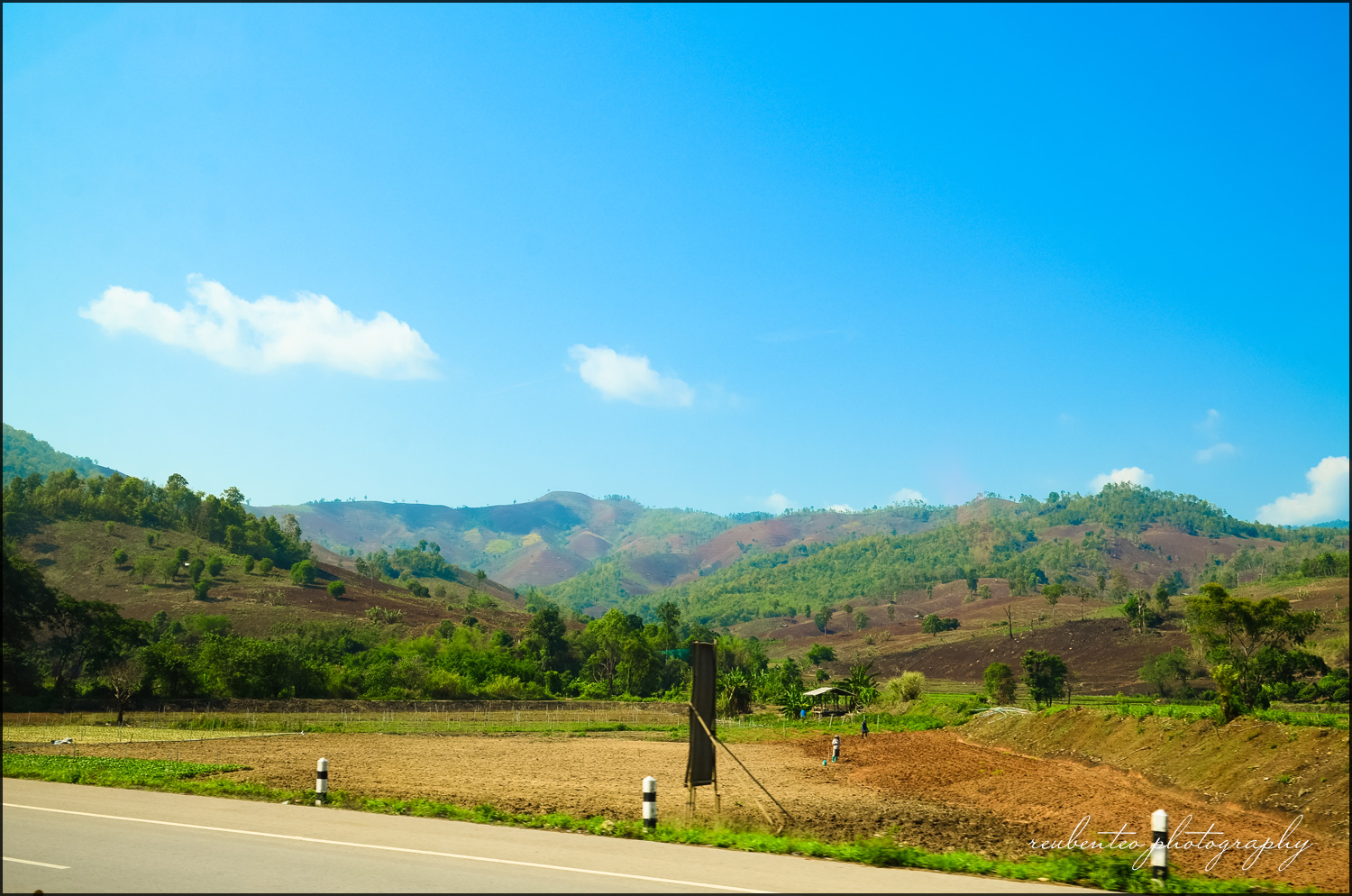 More of less everything looked like this through the bus window

We continued our journey up North to Chiang Rai. On the way, there was nothing much you could see or do. The rhythm from the window was like this: Trees, Farm, Trees, Farm, Trees, etc. Although it was boring, the scenery looked rather peaceful and beautiful. After a few hours ride, We finally saw the legendary Wat Rong Khun. 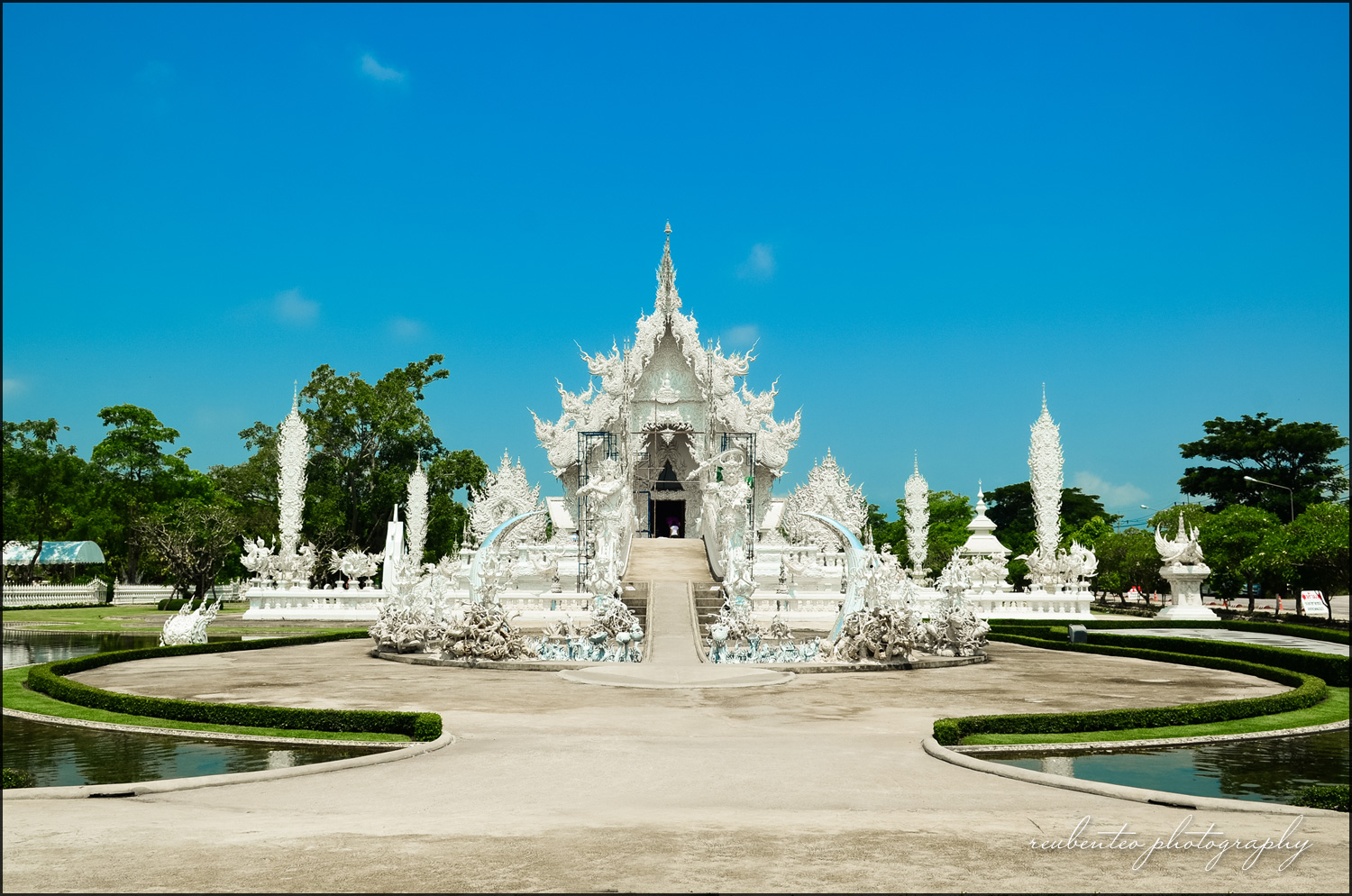 The most heavenly and overwhelming looking structure I’ve ever seen in my life. Wat Rong Khun or famously known as The White Temple is a contemporary unconventional Buddhist and Hindu temple and it was designed by Chalermchai Kositpipat. The inspiration for the design of this temple was based on a dream he had. Construction of this temple has yet to be completed and it started since 1997. 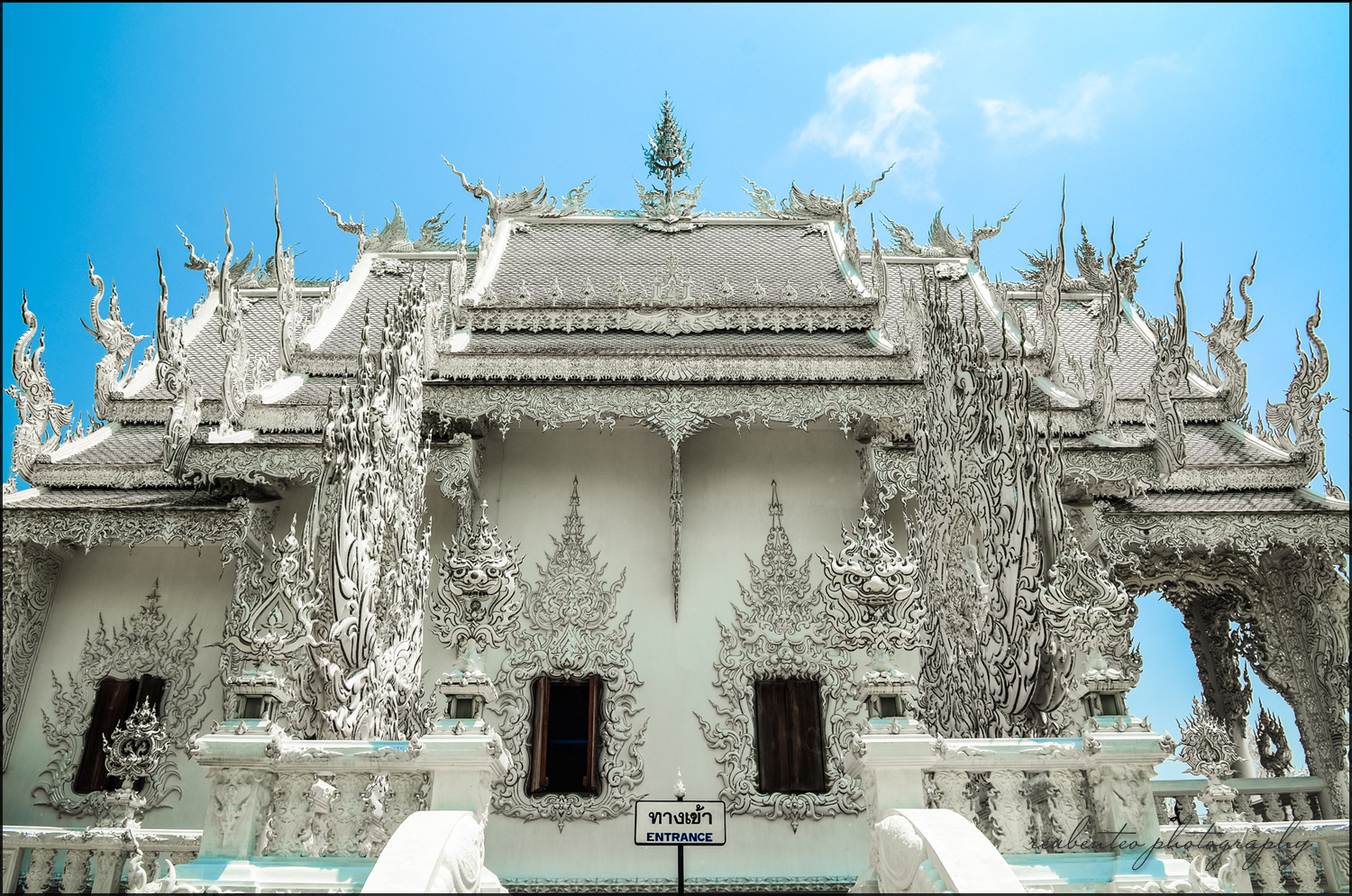 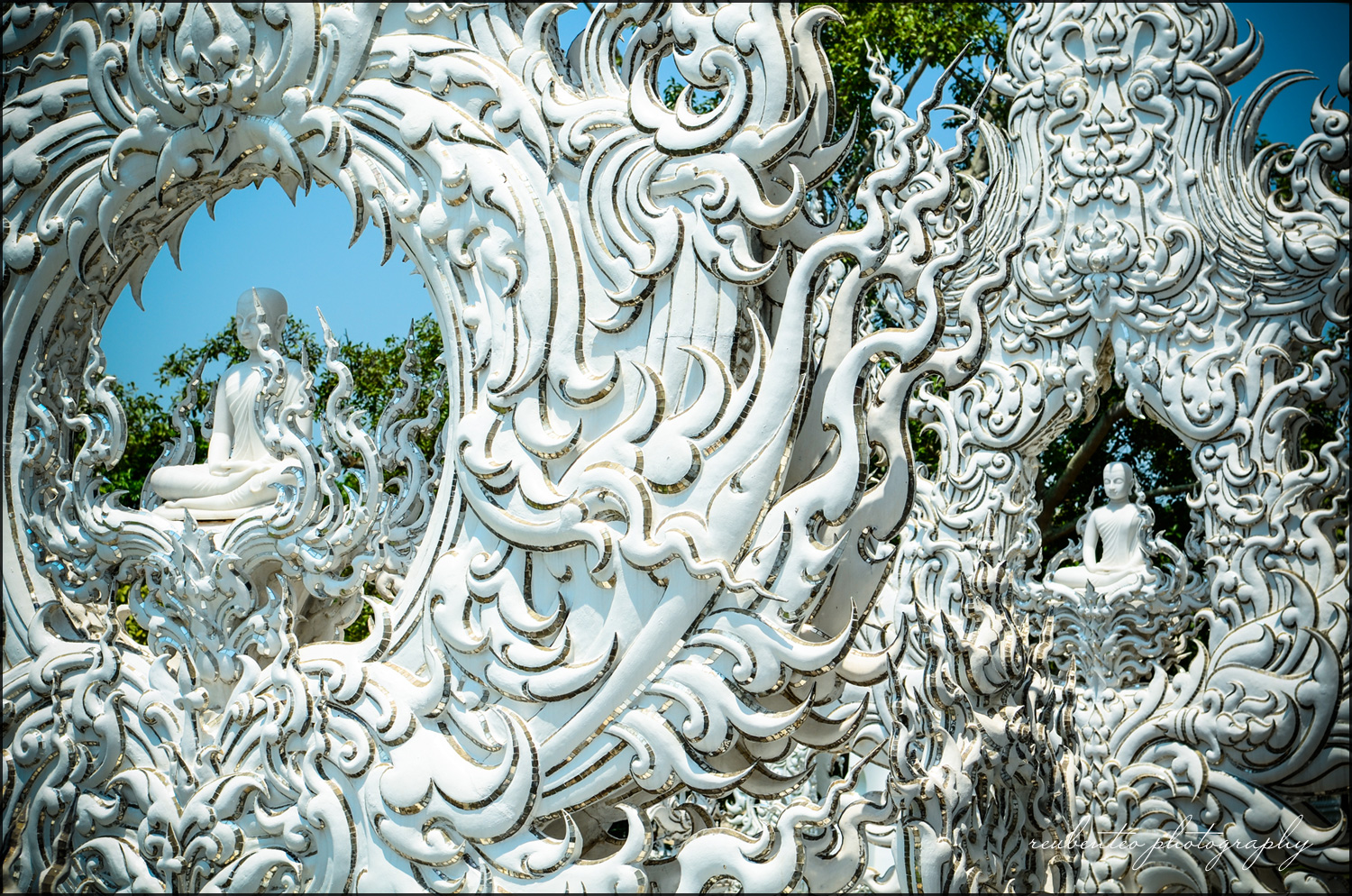 Unfortunately for us, the temple was going through some rennovation. We couldn’t get pass the bridge that was filled with glorious carvings and statues. I couldn’t help but to admire the details and effort put into the designs of the temple. It’s mind boggling. 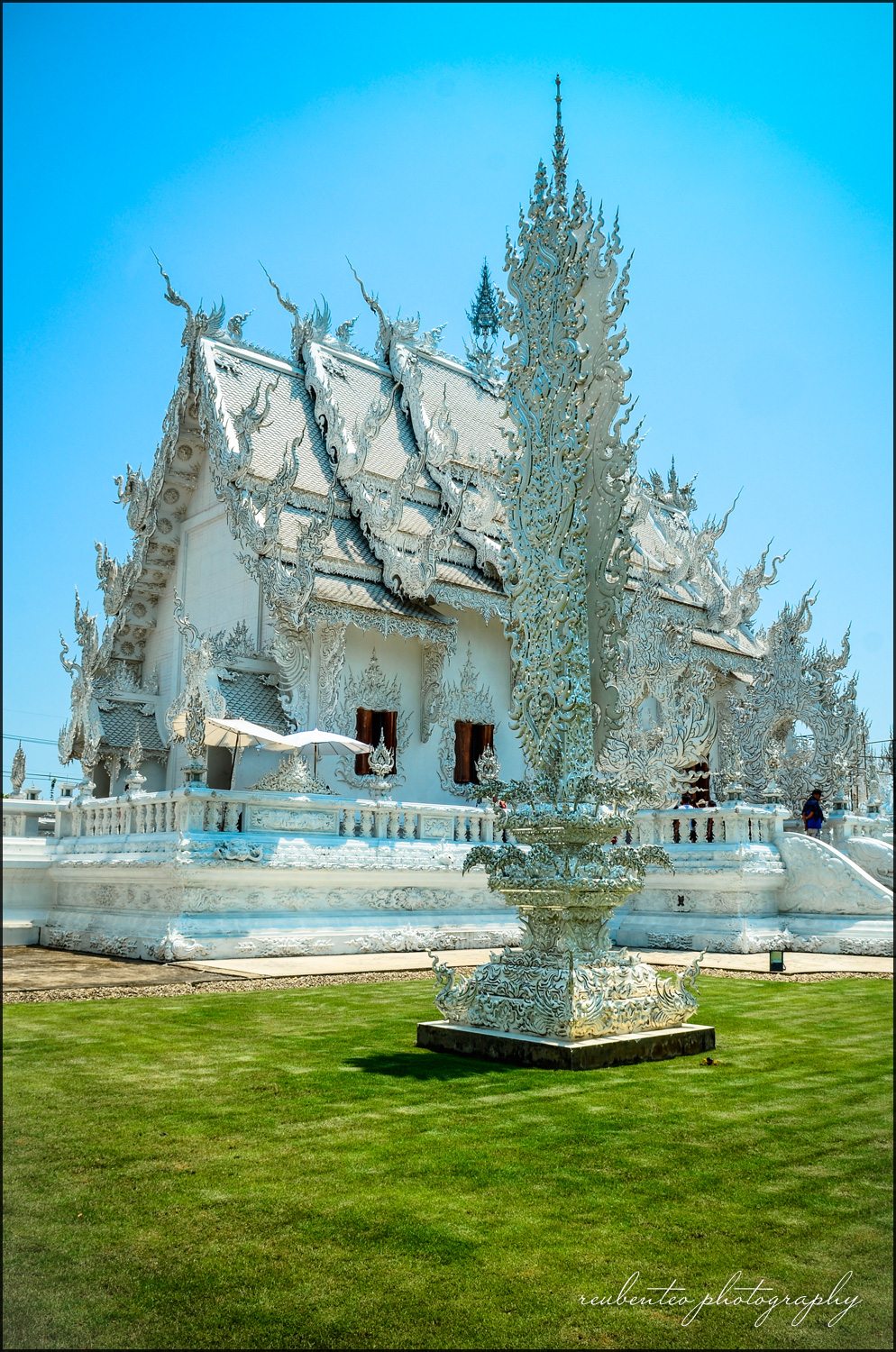 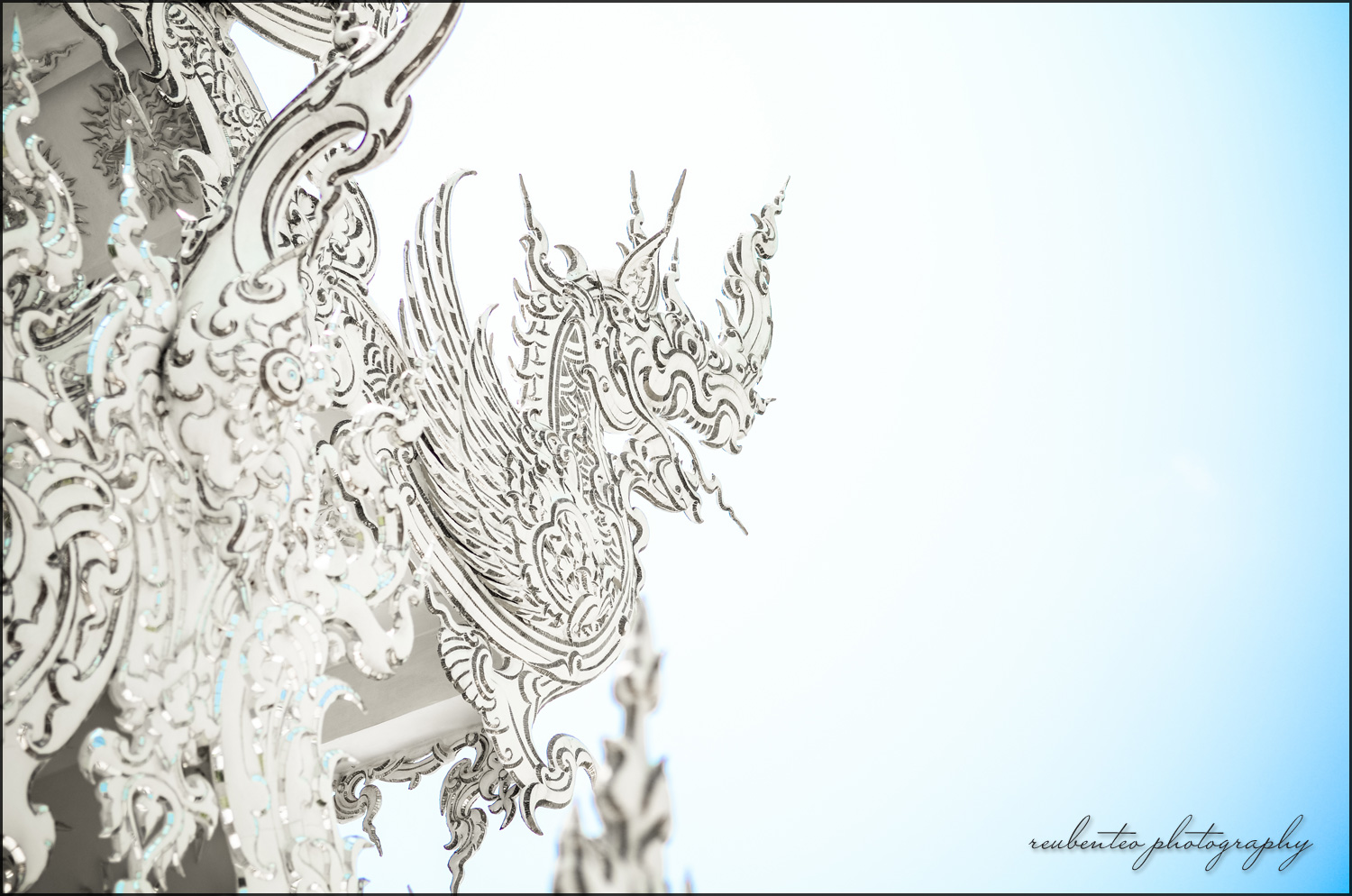 One of the many nagas on the rooves

Just beside the temple, there was this golden structure. It looked like a palace, but I was told that it was a 5 star toilet. It was one of the most exaggerated toilets I’ve ever seen. Yes, I gave it a try and it was very clean, considering this temple is situated in the remote areas of Chiang Rai. Five star or not, I’m sorry I can’t tell. 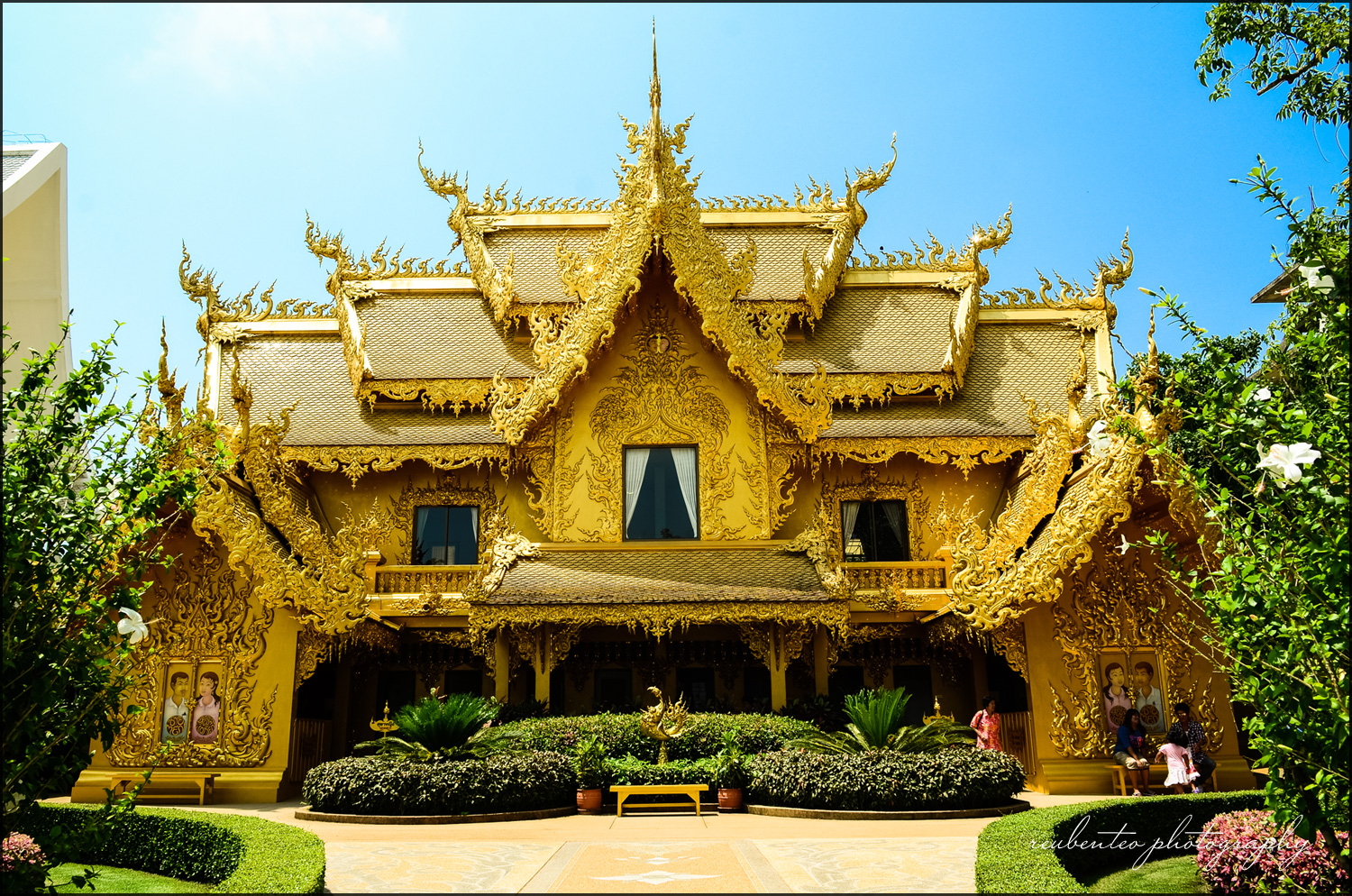 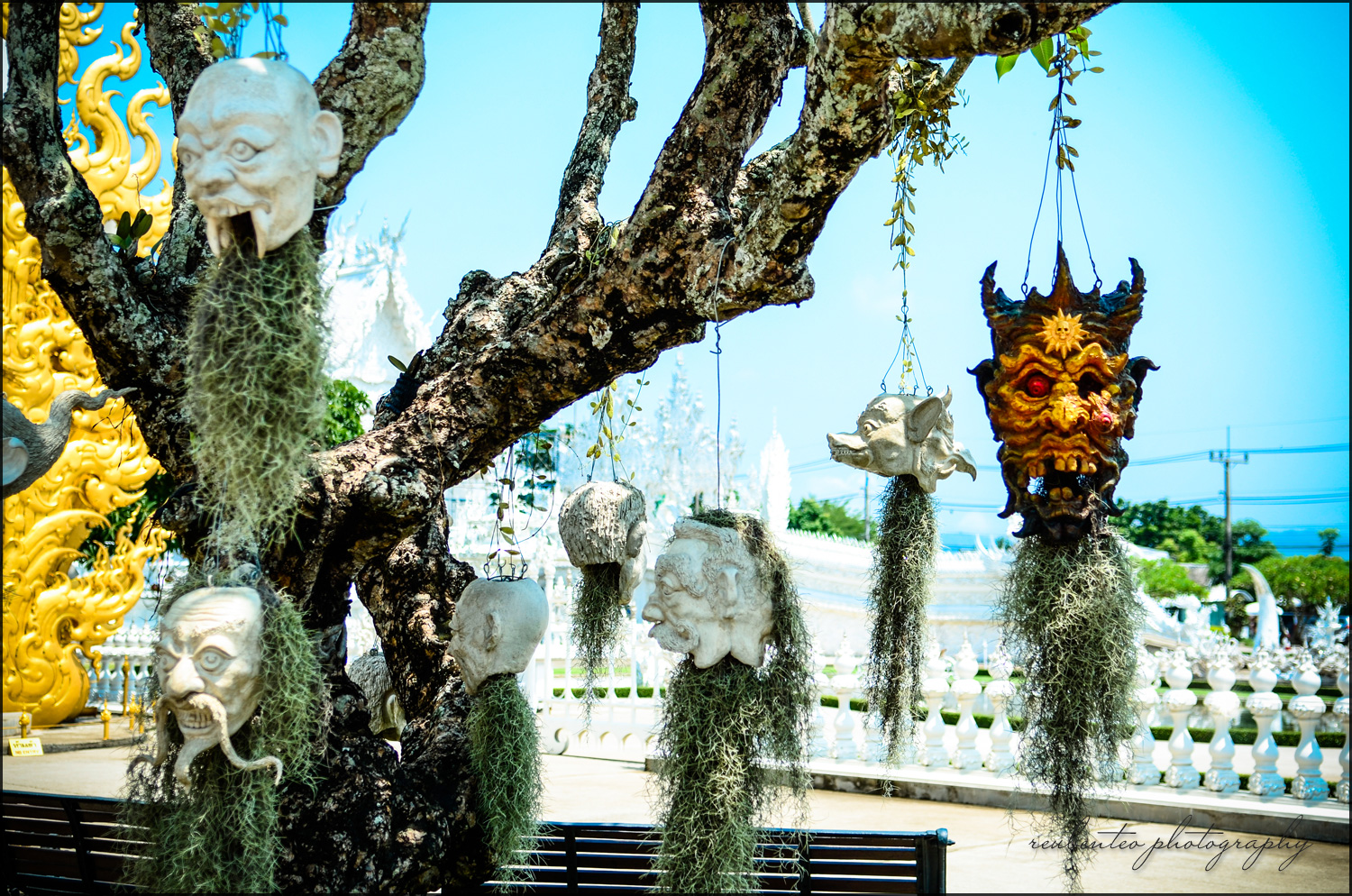 After everyone drooled over the white temple, it was time to go. On the way back to the bus, there were little statues of heads hanging around the trees. I had no idea what they mean. They all had this sinister look. I guess those are the tortured heads from the gates of hell. 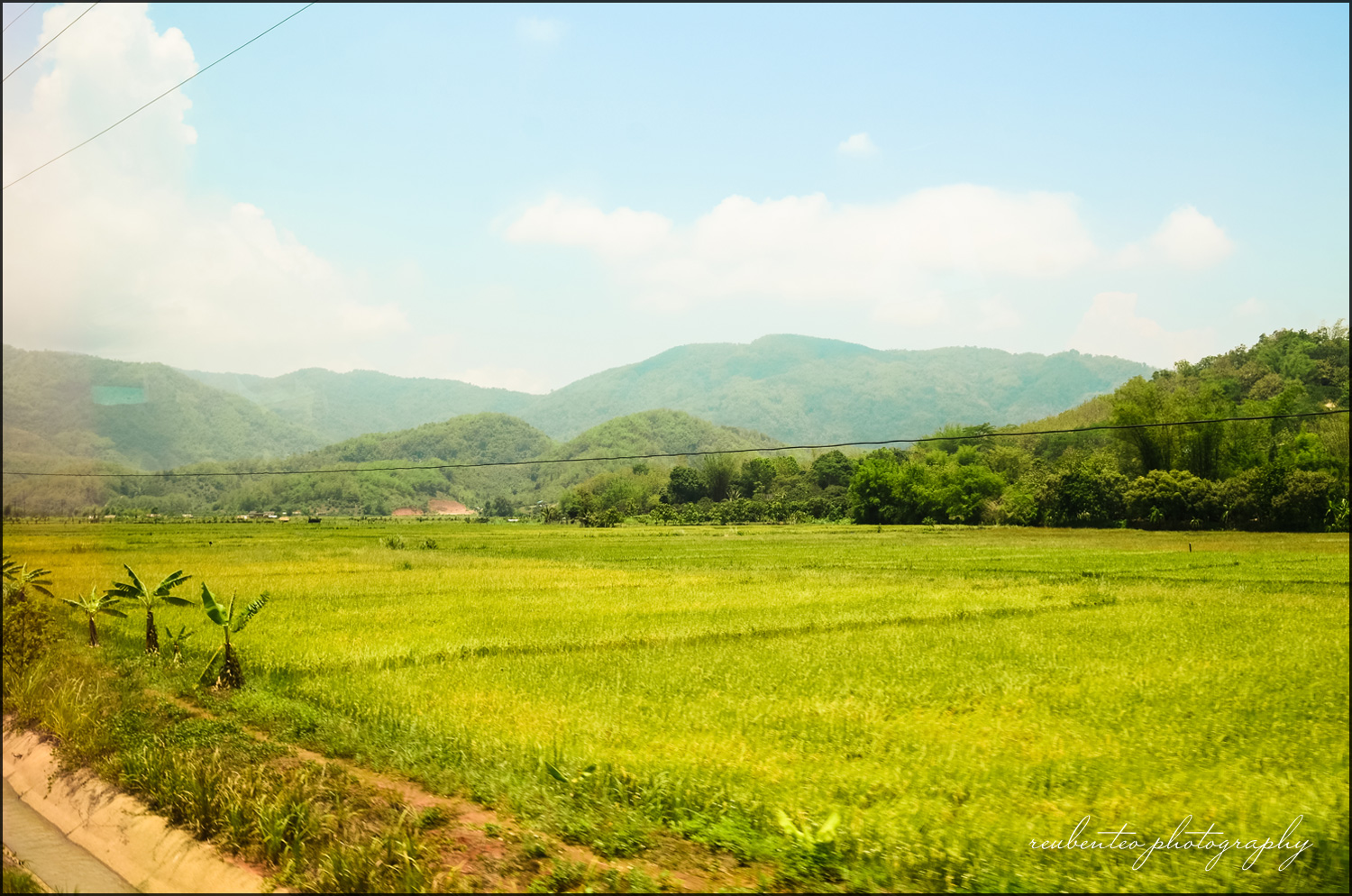 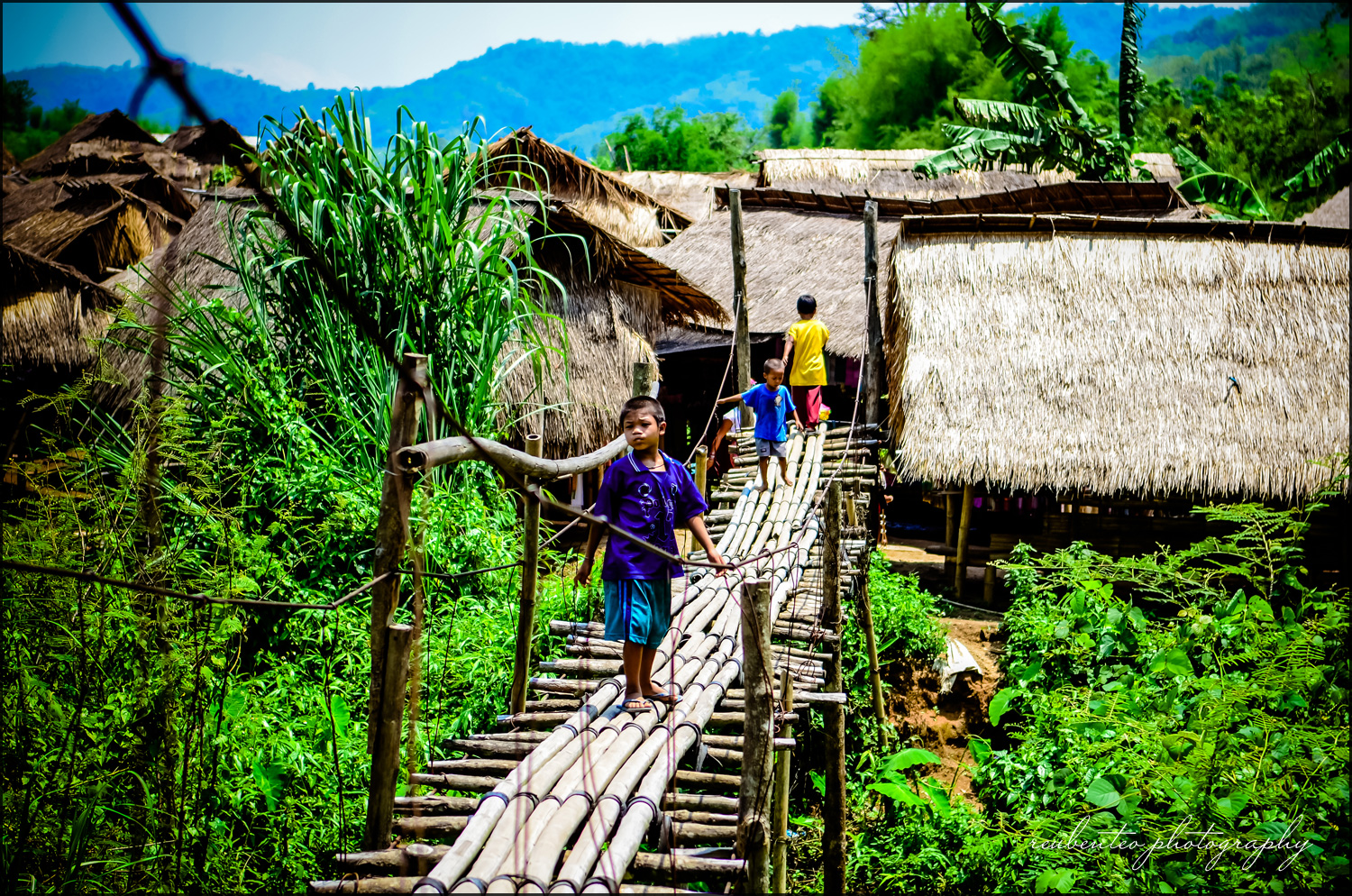 As we continued our long journey to the Golden Triangle, we all wanted to visit a village that was rather famous in Chiang Rai. It was the village that housed the Karen people or famously known as the Long Neck tribe. 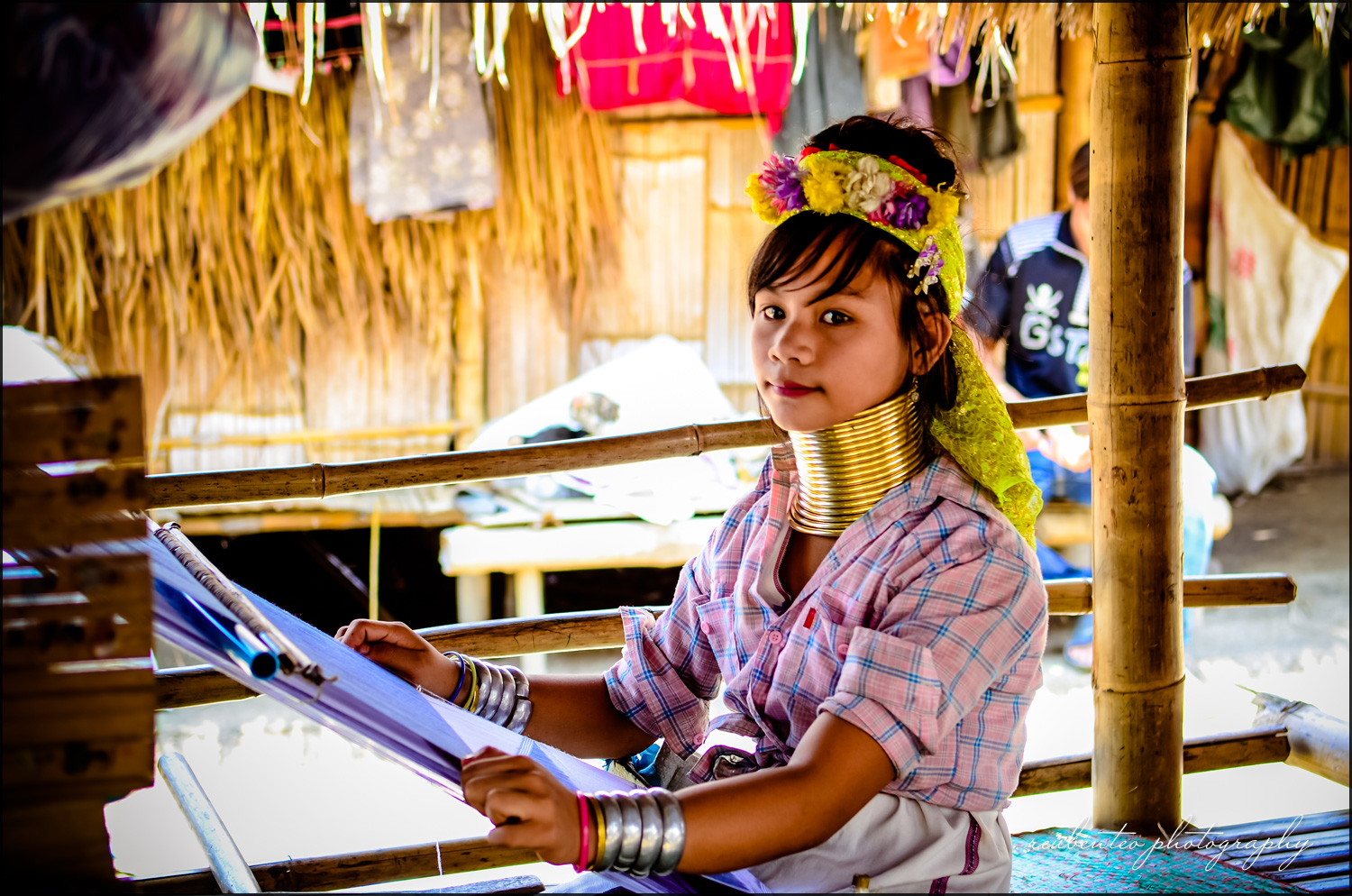 A Karen weaving scarves from silk

We were told that the village was actually a refugee camp for these tribe and it also housed another tribe called the Big Ears tribe. They are natives from the neighbouring country of Myanmar. A lot of these people came to Thailand to escape from the communist regime. Since then, they were taken care of by the Thai government and are housed in villages like this. They sold hand crafts, souvenirs and also a small fee of 400 baht to tourists who wanted to visit. 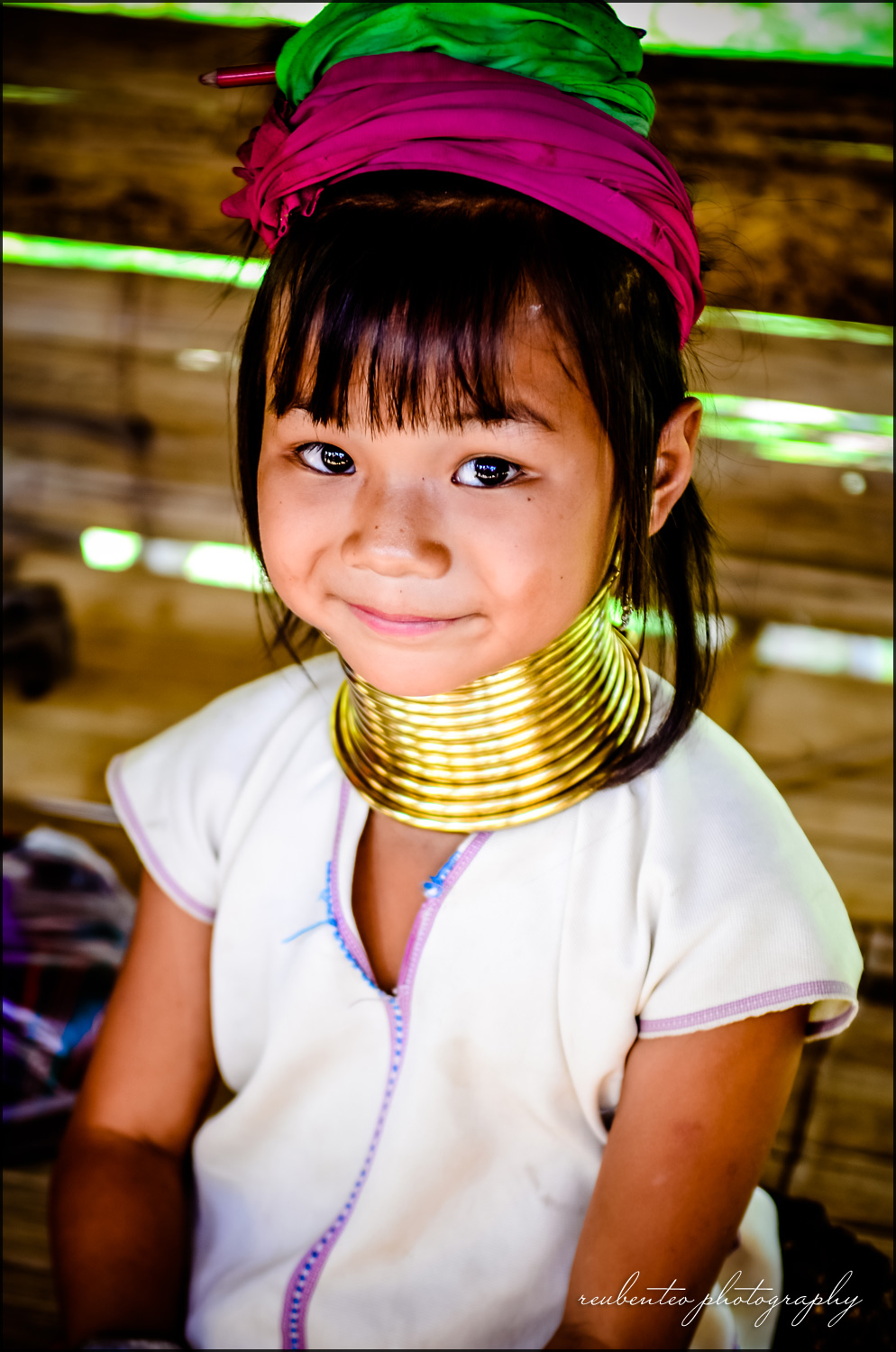 The little Karen girl I bought my scarf from

In the village, tourist could take photos with the girls and walk around the village and look at them as each of them sit in the hut waiting for a camera and smiling back at you. It felt like they were zoo exhibits. 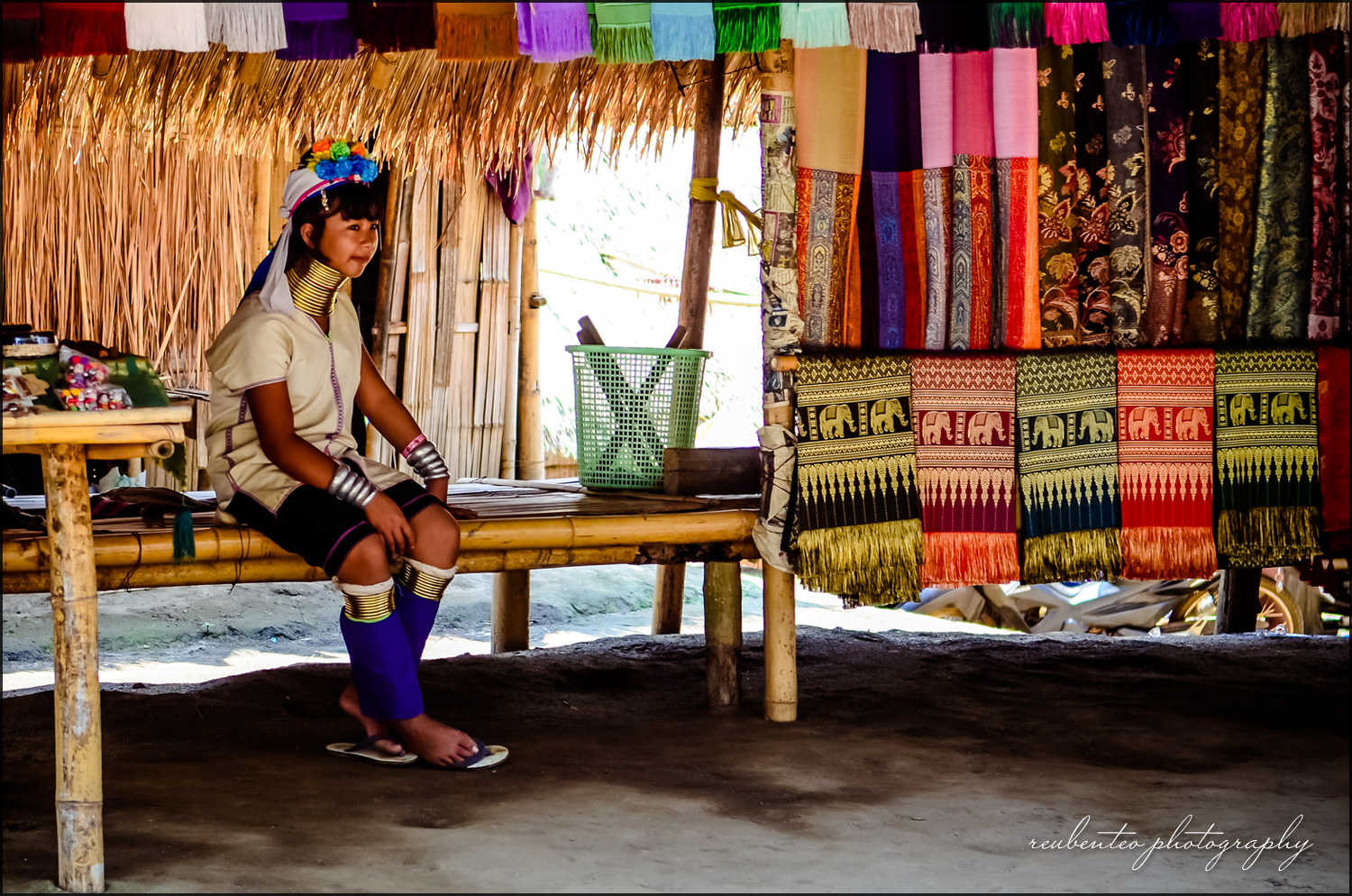 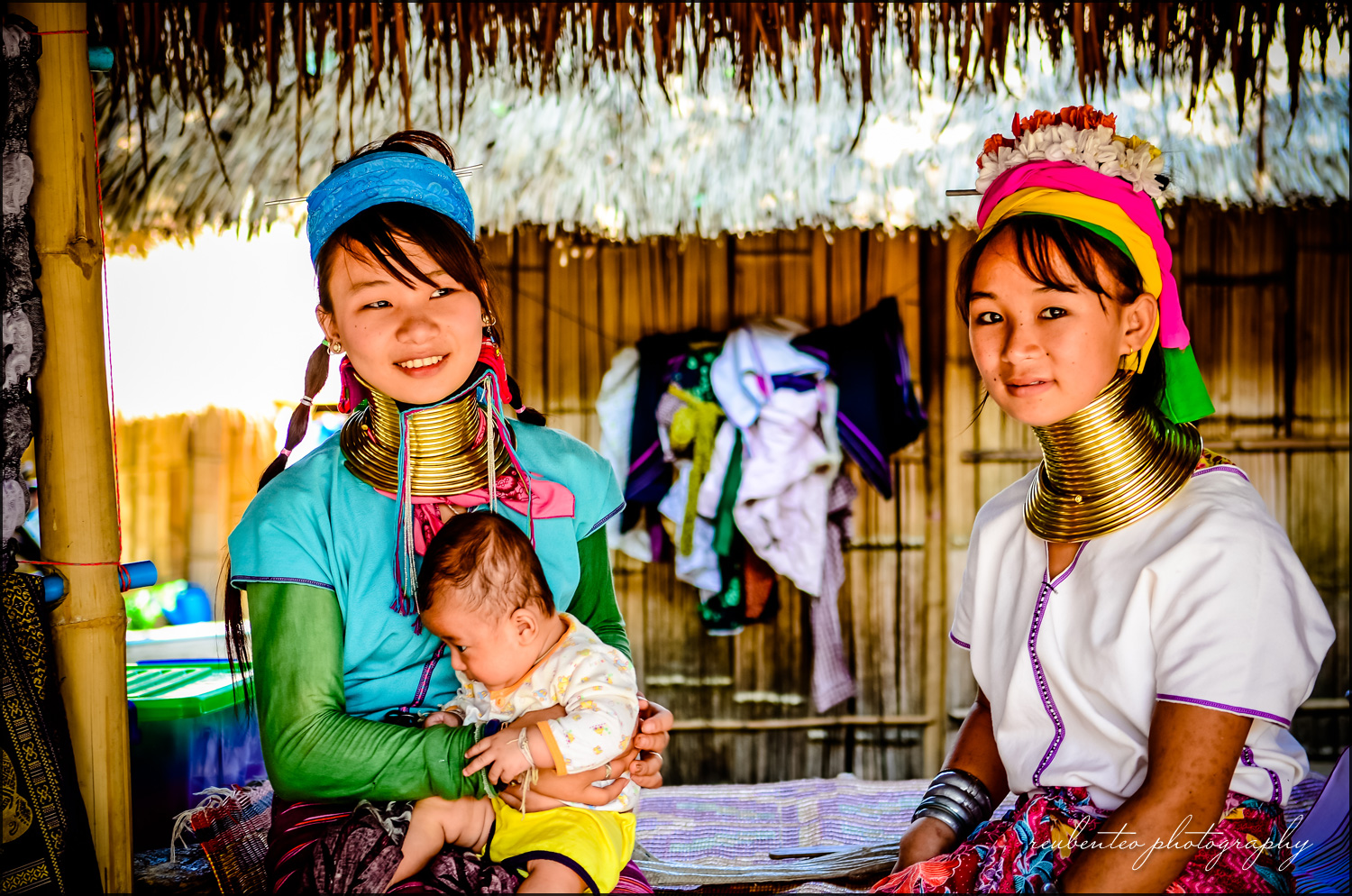 Young girls with brass coils around their neck

Alternatively, there were also other kids, who walk around surrounding tourists and begging for money. One particular scene I saw was this little girl, who picked up a small flower and gave it to one of the tourists. The tourist took the flower and the little girl asked for a small sum of 10 baht. The tourist shook her head and left. I was so saddened by the expression of the little girl, but there was nothing we could do. We were told by the tour guide that if we did give one of the begging kids any money, the other kids would flock and surround you to demand for money. I took a shot of this moment and I call it “The Little Flower” 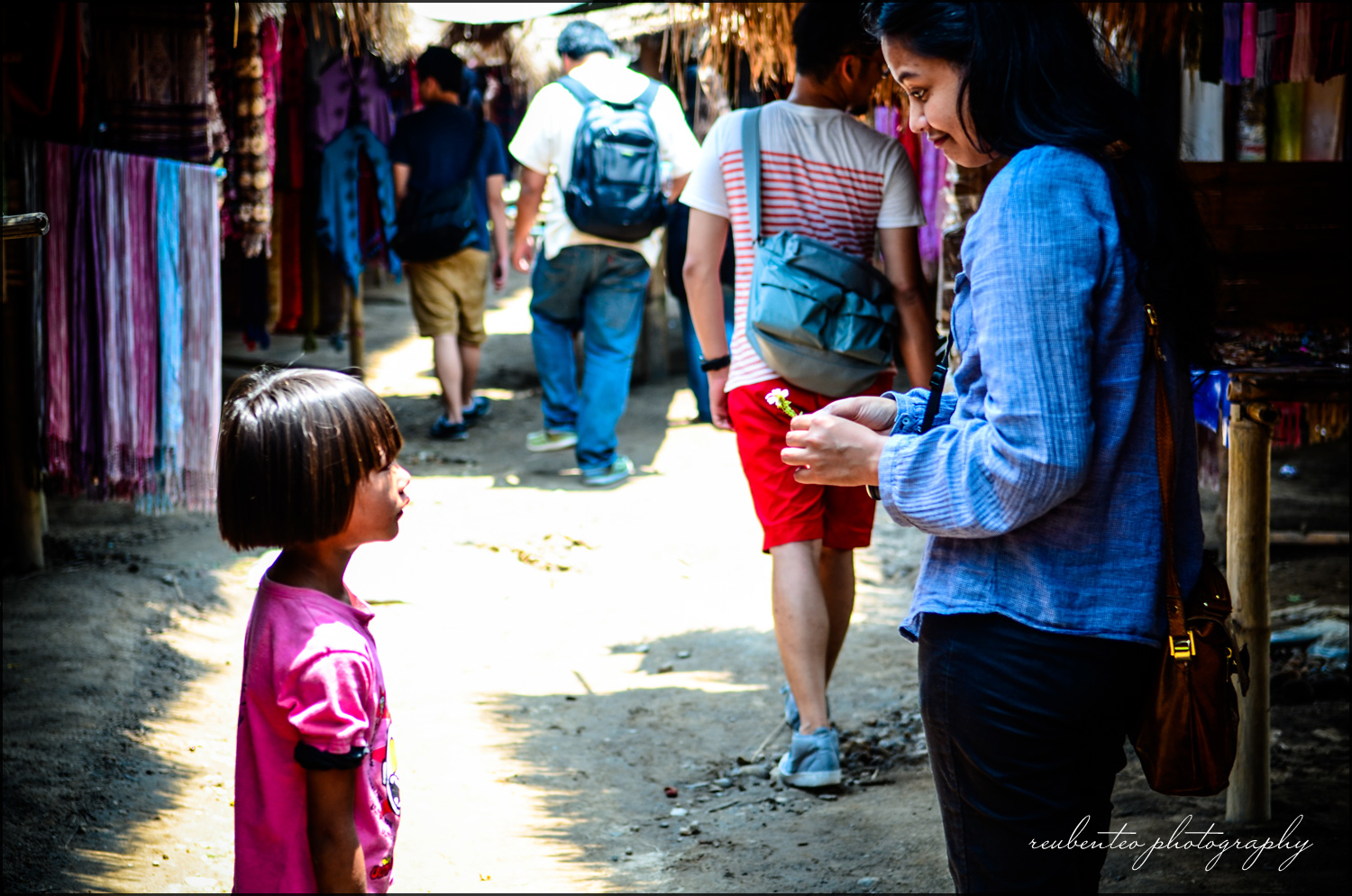 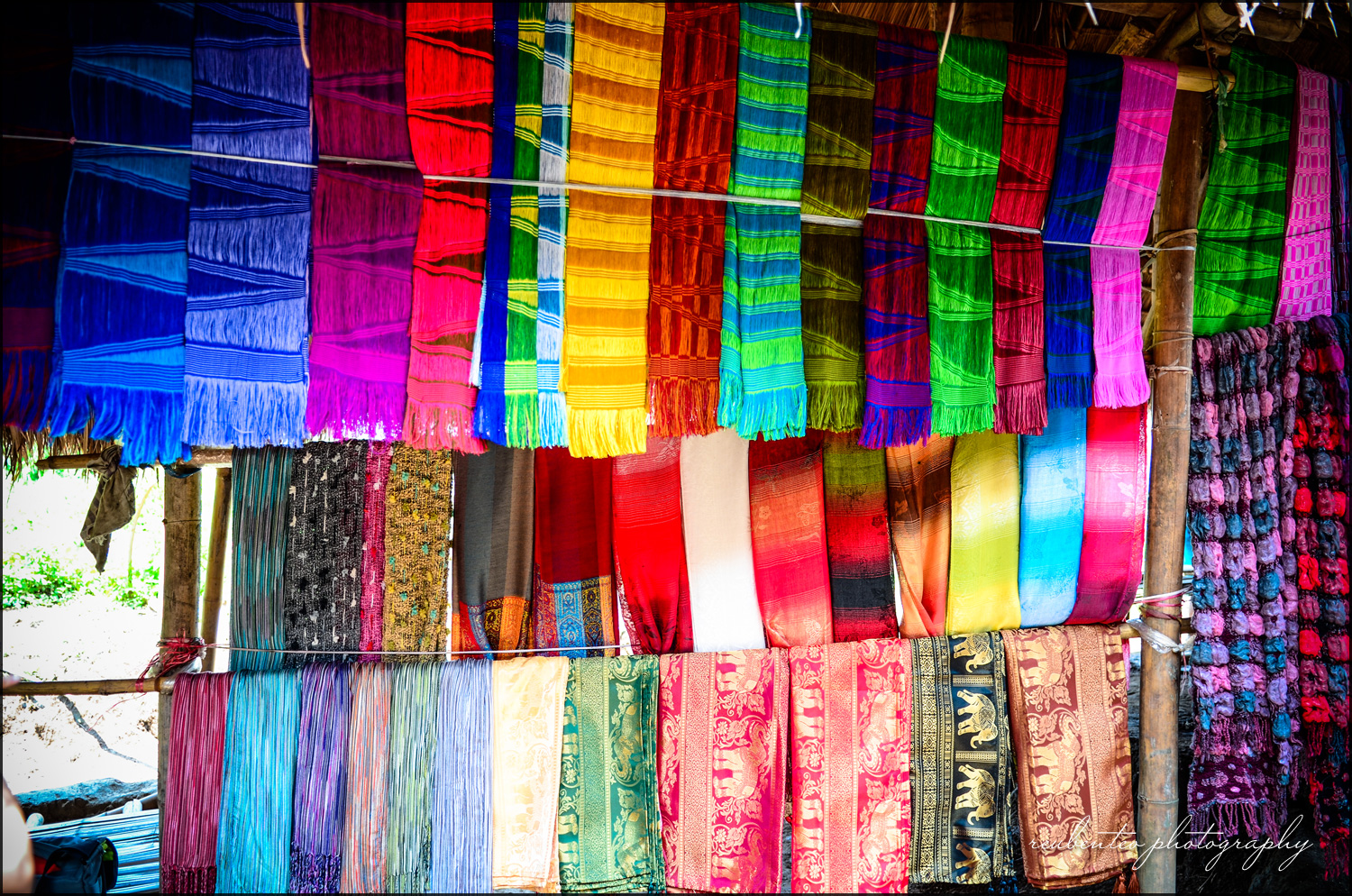 Our journey to the Golden Triangle was still a long way to go. I’ll continue with it in the next post.