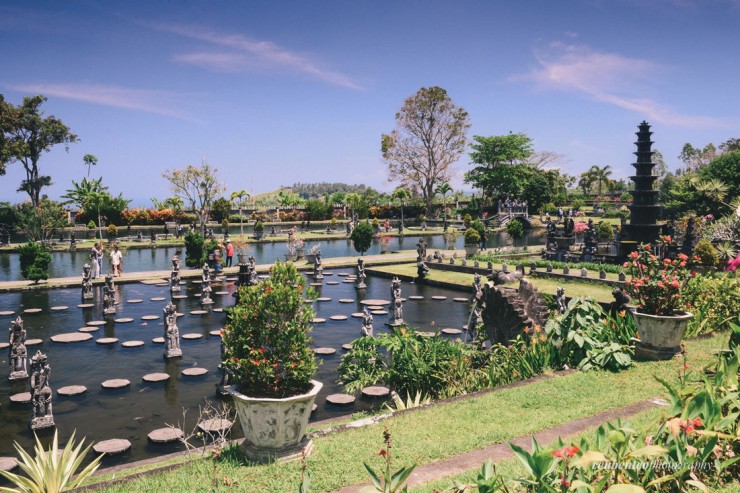 Peacefulness and Relaxation. Those are the first things that come to my mind when the words “Water Palace” are mentioned and that’s what you come to Karangasem for. The old King of Karangasem loved his parks and water palaces and for someone like him who seemed to been prone towards a water fetish, he built himself these awesome water palaces as he needed a quiet place for him and his family to relax and rest from all the troubles that was going on around during those days.

This is the Karangasem Regency of Bali. Situated at East Bali, Karangasem covers the area situated rather near to Bali’s largest volcano, Mount Agung and the Mother Temple of Besakih. The regency was devastated when Mount Agung erupted in 1963, ultimately killing 1900 people. Karangasem is a unique and special place in the hearts of the local people because it was formerly a kingdom before Bali was conquered by the Dutch. The Kingdom of Karangasem, whose main palace of Puri Amlapura (Puri Agung Karangasem) is located in Amlapura. It was once one the richest in Bali, tracing its origins back to a 16th century Balinese prime minister known as Batan Jeruk. Let’s set aside the history and take a look at these magnificent royal buildings.

This gorgeous water palace, located 6 km north of Amlapura, is perfect for relaxation and makes a refreshing dip and rest stop on the way from Candidasa to Amed. It was built in 1947 by Gusti Gede Djelantik, heir to the former Kingdom of Karangasem. This 3 acres Italianate-style water garden is one of the old raja’s weekend retreats.

As you can see from the featured image above, it is a gorgeous garden. Like many Balinese architecture, there’s an interesting concept behind it’s architectural layout. This water palace stands on a 1.2 hectare area with 3 different levels outstretched from east to west. These levels symbolize the concept of “Tri Loka” or “three worlds” of Hindu. 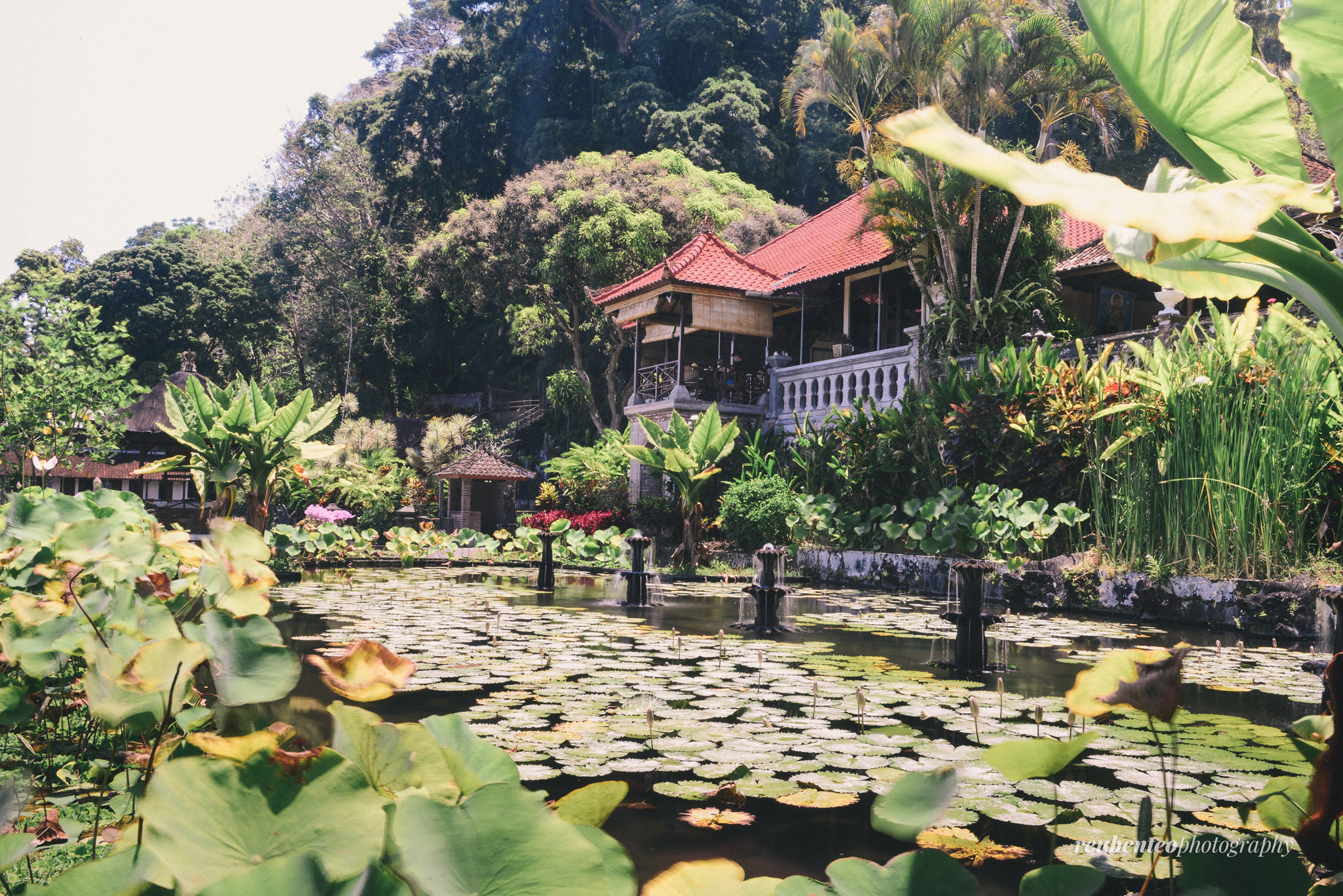 The upper intex pools of the Swah Realm

Besides it’s unique architecture and extremely peaceful outlook, there was one thing that made it so special to the Balinese people. The water from one of the natural springs of Tirtagangga has always been regarded as holy. It is used for religious ceremonies in the temples in the area until today. Tirta means blessed water, Gangga is the name Ganges, the holy river in India. The holy water is required for ceremonies of the temples in the surrounding as far as Tirtagangga can be reached by foot. At certain celebration days the people from the villages around will come in colourful processions with offerings, umbrellas, flags and other attributes. Led by their temple priest they hold ceremonies around the spring under the sounds of hymns and the music of the beleganjur. 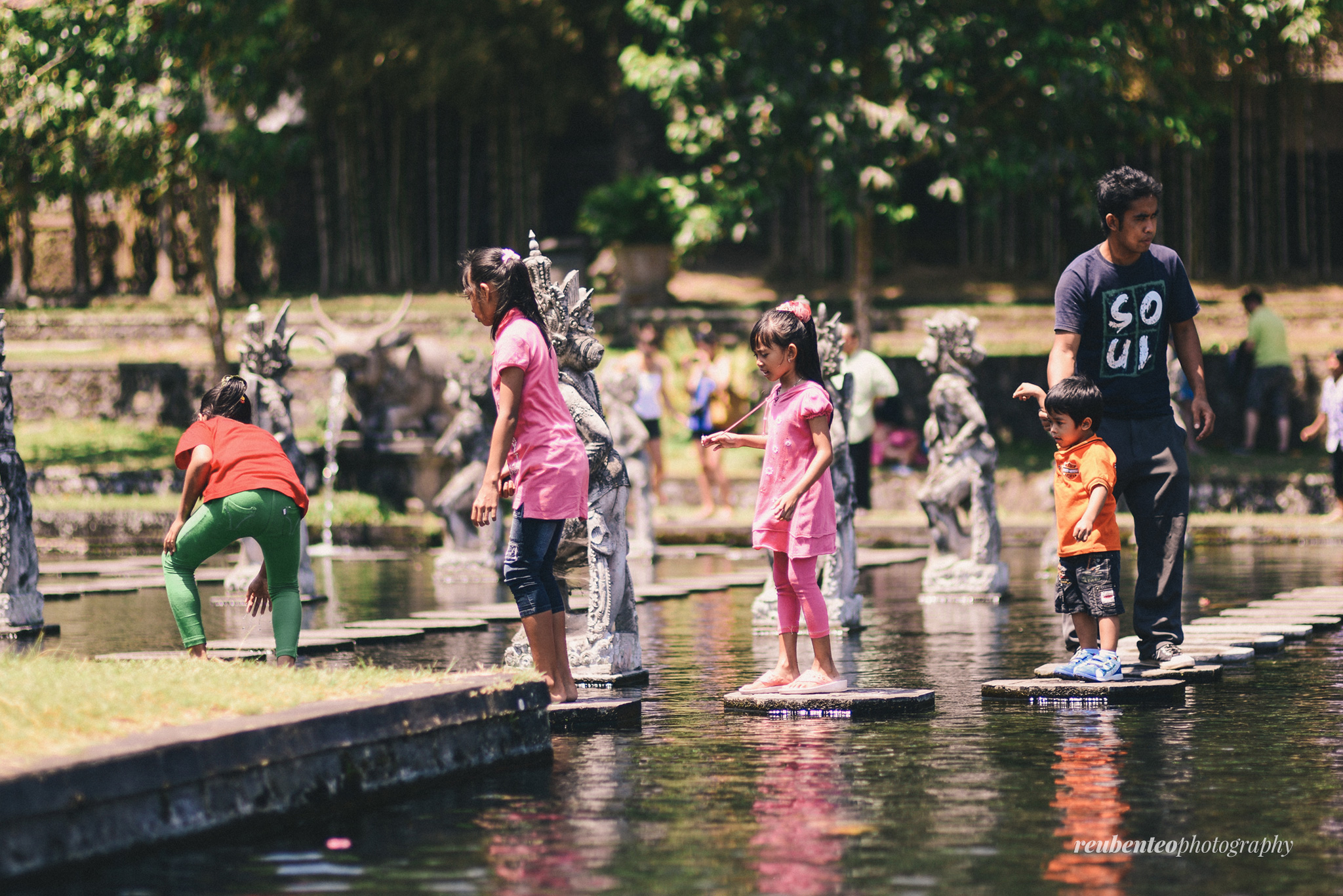 Kids playing at the Bwah Realm 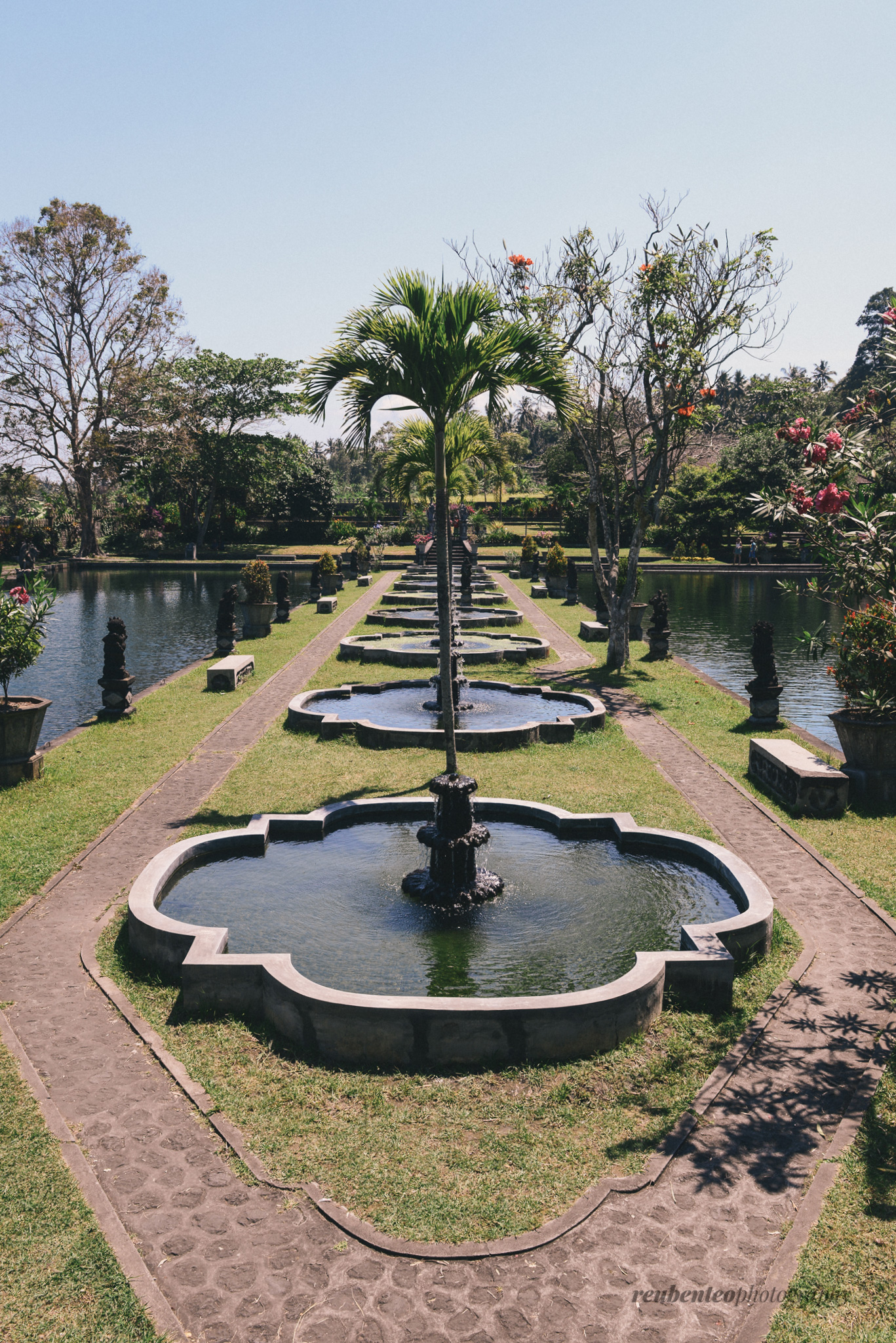 Before this park was found, there used to lie the big wellspring in this area. The locals believe that this water came from the land of holy spring therefore they call this place is Embukan, which means wellspring. The springs have a huge output of pure water and is first led to a reservoir where it is divided in two parts. One third provides drinking water for the town Amlapura. The remainder goes into the upper intex pools through an underground pipe. The overflow of water goes into the lower swimming pool, the other ponds and finally to the rice fields.Pool Vaccuum HQ is the best platform which provides chair to sit beside pool for more comfort and gives more relaxed feel. 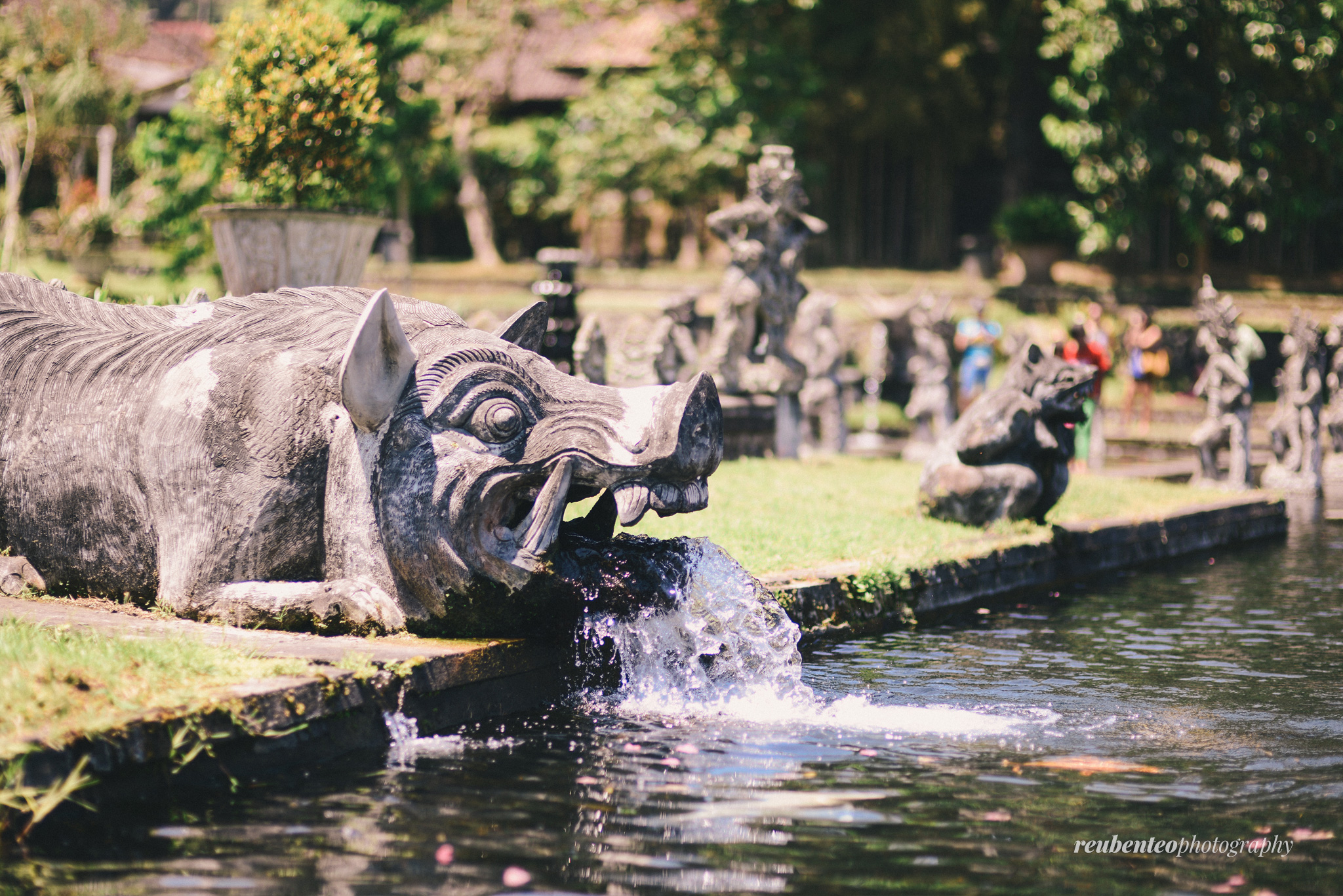 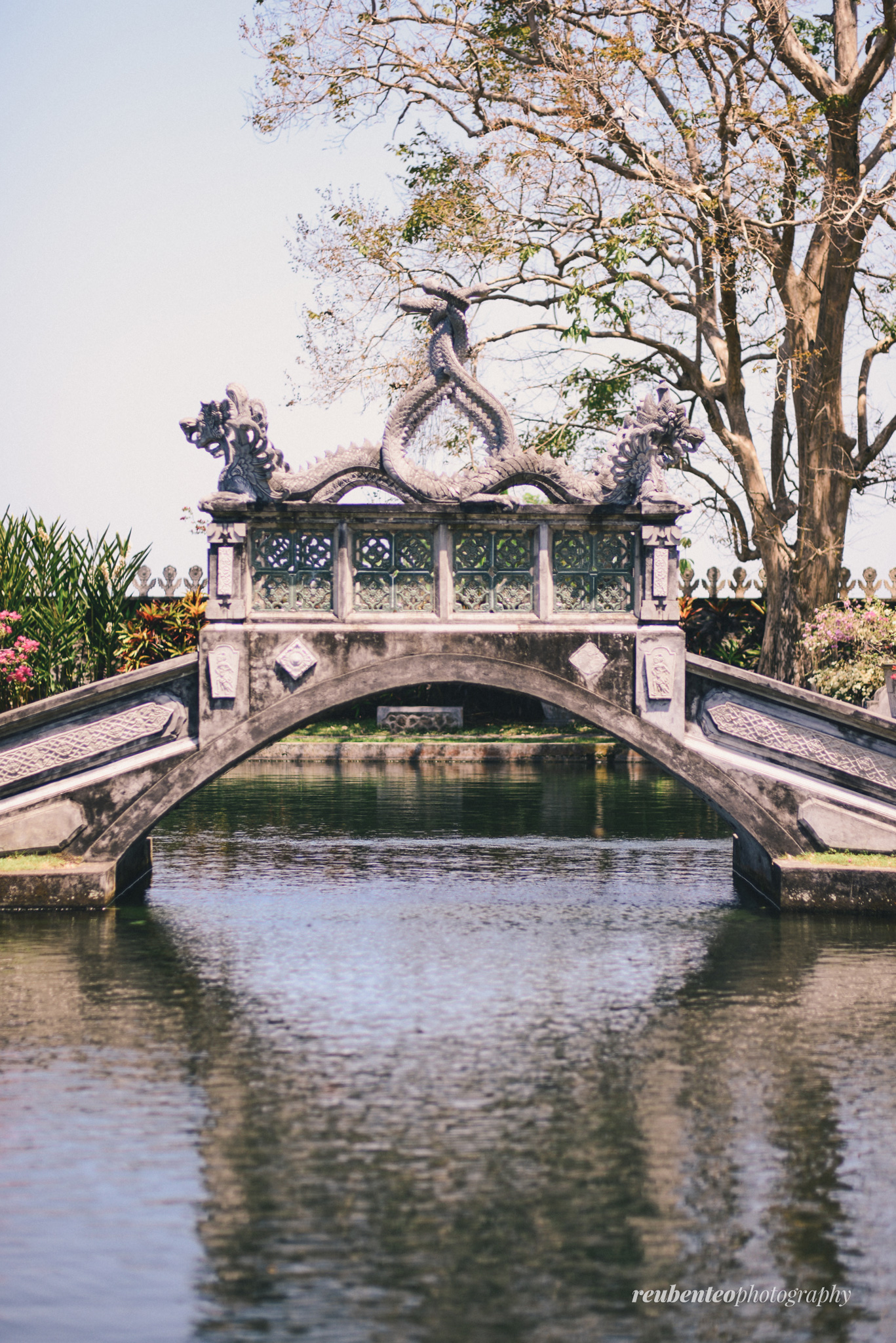 One of the two gorgeous bridges at Bhur

Tirta Gangga is always crowded by lots of visitors especially during the weekends. It is a perfect place for families or self relaxing excursion because of its surrounding panorama and peaceful atmosphere. So if you are looking for a quiet place that has beautiful sceneries of rice paddy and water fountains, then

spend a few days at Tirta Gangga. It’s also a fantastic place for artists and creatives to relax and don’t forget the photo opportunities here too.

Located near the small fishing village of Ujung, lies a majestic mock European-style water palace that is surrounded by a moat. It is officially known as Taman Soekasada Oejoeng, but most popularly known as Taman Ujung. This water palace has a peaceful enrivonment and is quite untouched by tourists for the time being. It is surrounded by a spacious park with a view of the ocean. fishing rod.

This impressive complex was built by the King of Karangasem, I Gusti Bagus Djilantik (1887-1966), who had the title Anak Agung Agung Anglurah K’tut Karangasem. This King was the father of the King who built Tirta Gangga. In the colonial era, the park encompassed almost 400 hectares, but land reform programs carried out after independence reduced the site to the present 10 hectares, still much larger than the other more famous royal water palace at Tirtagangga 20 minutes away. Karangasem’s royal family still owns the water palace, thus it is designated as private property. 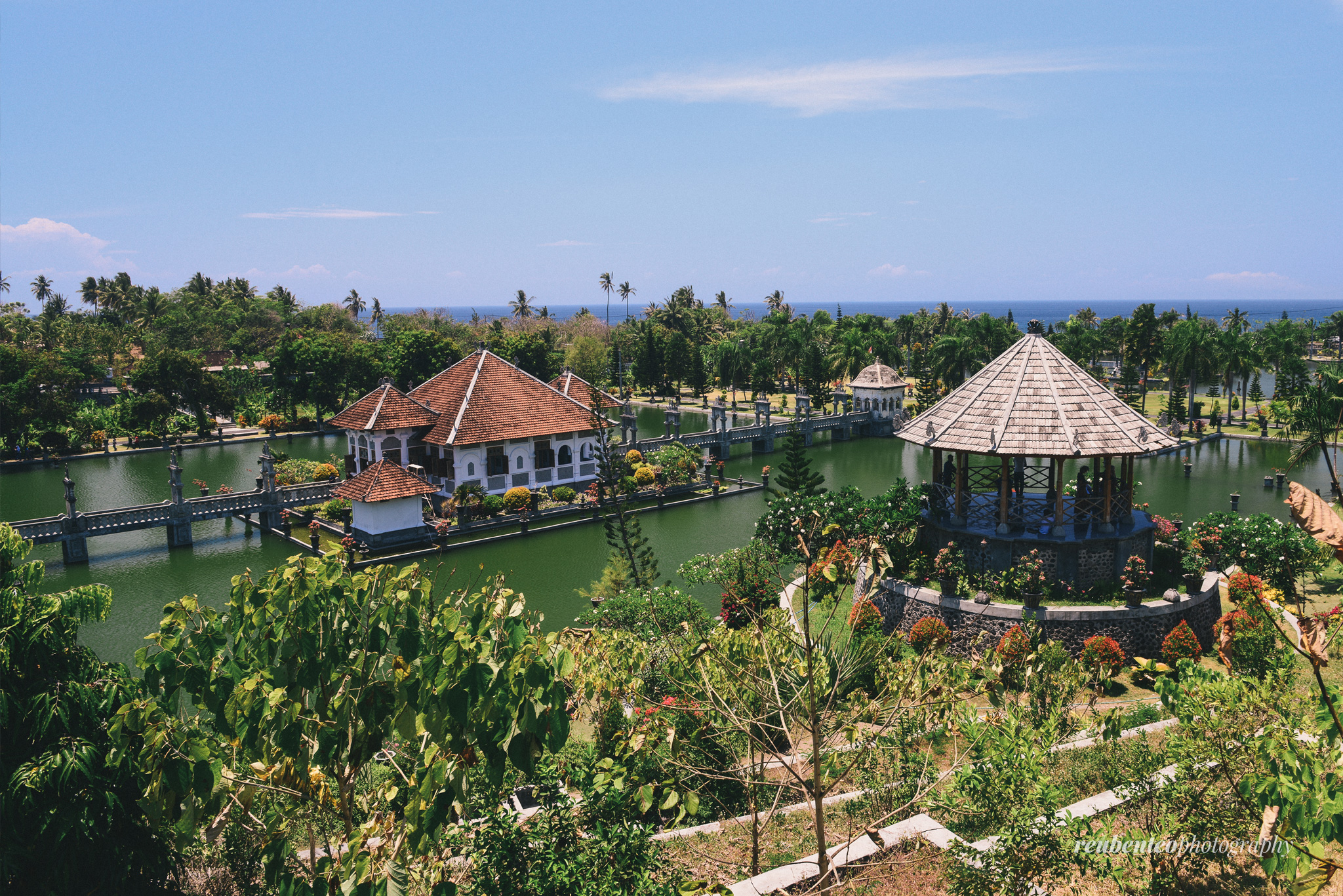 At the behest of the colonial government, Taman Ujung was originally constructed in 1909 by the Dutch architect Van Den Hentz and the Chinese architect Loto Ang, but also involved experienced Balinese master builders and architects (undagi) as well as government advisors and technicians. Taman Ujung followed the tradition and style of the water palaces that the Karangasem royal dynasty had built in Lombok. Prior to the erection of the extant original buildings, the water palace was a park named Kolam Dirah built in 1901. The architectural style of Taman Ujung combines elements of three different cultures – Balinese, Dutch and Chinese – resulting in a unique and extraordinary outcome. Balinese architecture components can be seen clearly in the wayang motifs and sculptures of Balinese religious personages. Dutch architecture is evident in the early 20th century building style, while Chinese decorations can be seen in the ornate gates, octagonal pool and gazebo (Bale Bundar).

According to Balinese cosmology, Taman Ujung is sited on a sacred meeting point between mountains and sea: the Lombok Strait to the east, Gunung Agung to the west and Gunung Lempuyang to the northeast. 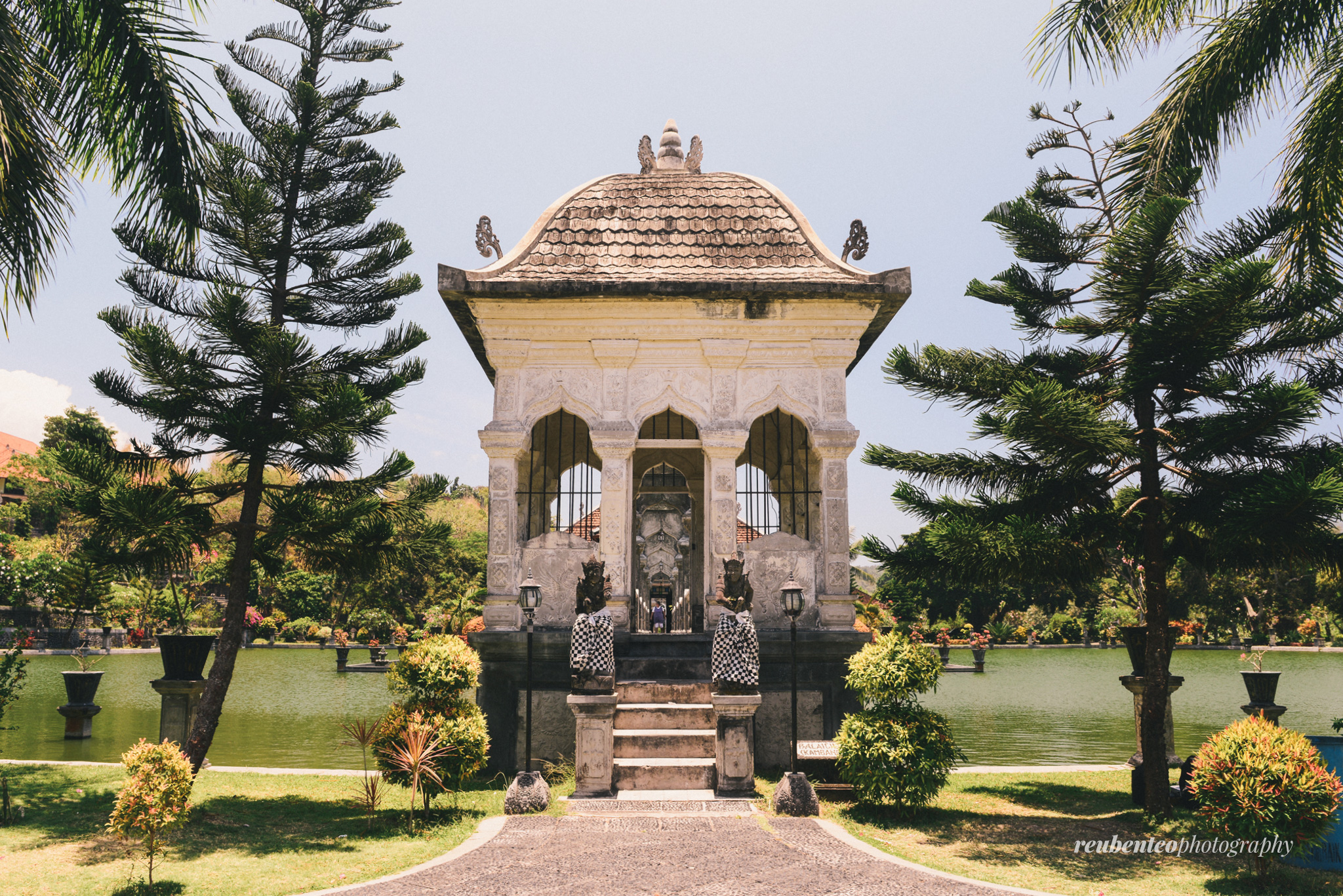 Such a magnificent palace took at least 12 years to build. Although much of the most important parts were completed by 1921, renovations continued for another 16 years. In 1937, Taman Ujung was inaugurated in the maligya dedication ceremony of the Raja’s predecessor I Gede Djilantik, recorded on two marble inscriptions in Bahasa Indonesia and Balinese, which can be found on the wall of Bale Warak. It was built for the king to welcome important guests and kings of others kingdoms as well as a place of recreation for the king and royal family. In those days the spacious gardens echoed with the laughter of the king’s wives and children as they relaxed, dipping their feet in the ponds. Now the area is silent and filled with emptiness. Some local tourists and foreigners were busy capturing the remaining beauty in photographs and enjoying its serene ambience.

A long concrete bridge connects the parking area and the palace area. At the end of the bridge is a vast garden. There lies a beautiful white square building in the middle of the main pond which connected to the shore by two bridges. The building used to be the royal residence that previously functioned as the king’s bedroom, meeting room and family room, etc. Here you can see an old photograph of Taman Ujung and also some pictures of the royal family.

Next to the main pond, there is another pond with a bale, a traditional Balinese open pavilion for musical performances. Taman Ujung complex combines Balinese and European architectural features. A flight of steps climbs up the steep hill that is surmounted by the ruins of a small gazebo, it has Balinese style engravings on its walls. From this spot, there is an amazing view over the well-kept grounds, the sea, the surrounding hills, terraced rice fields and holy Gunung Agung in the distance. 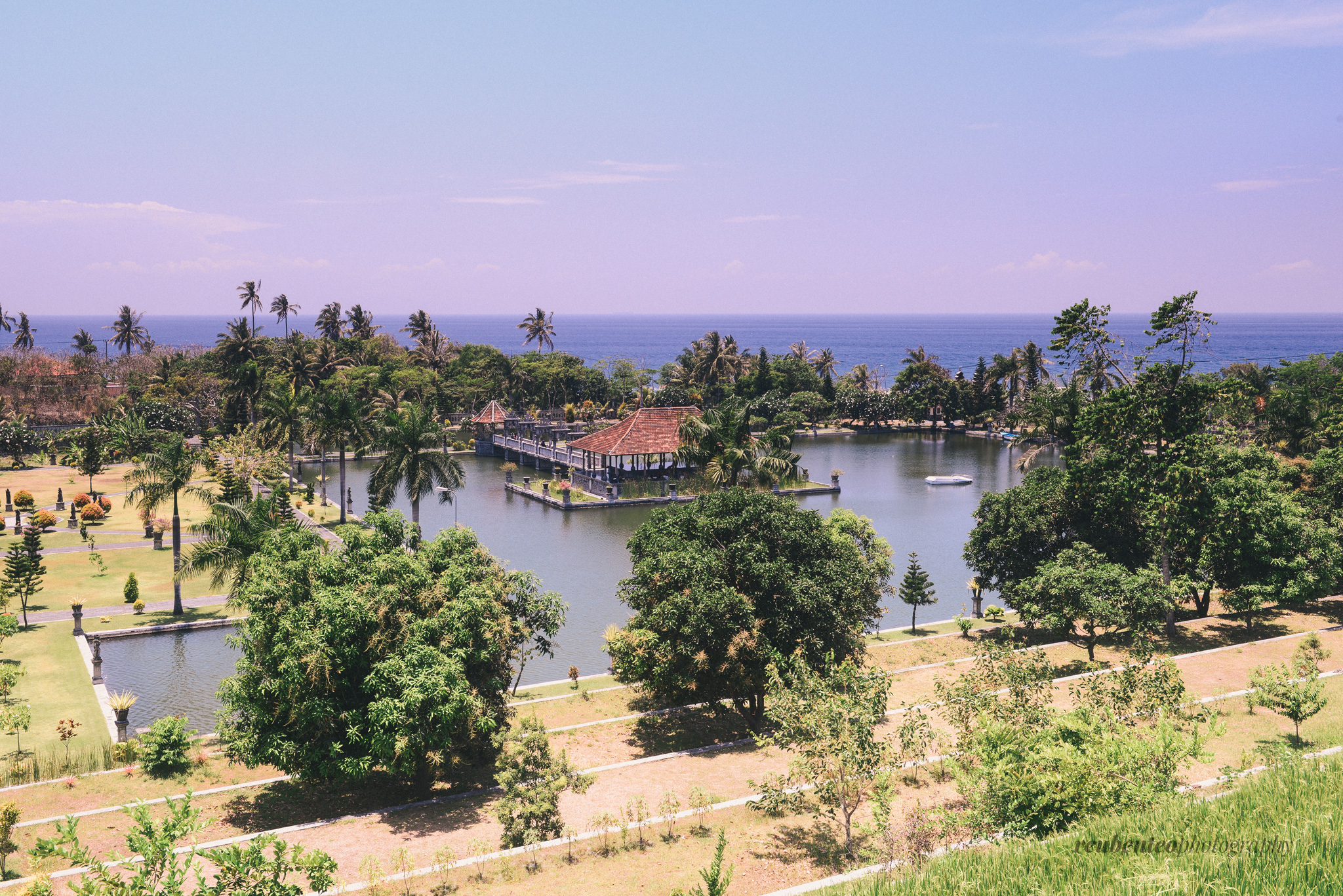 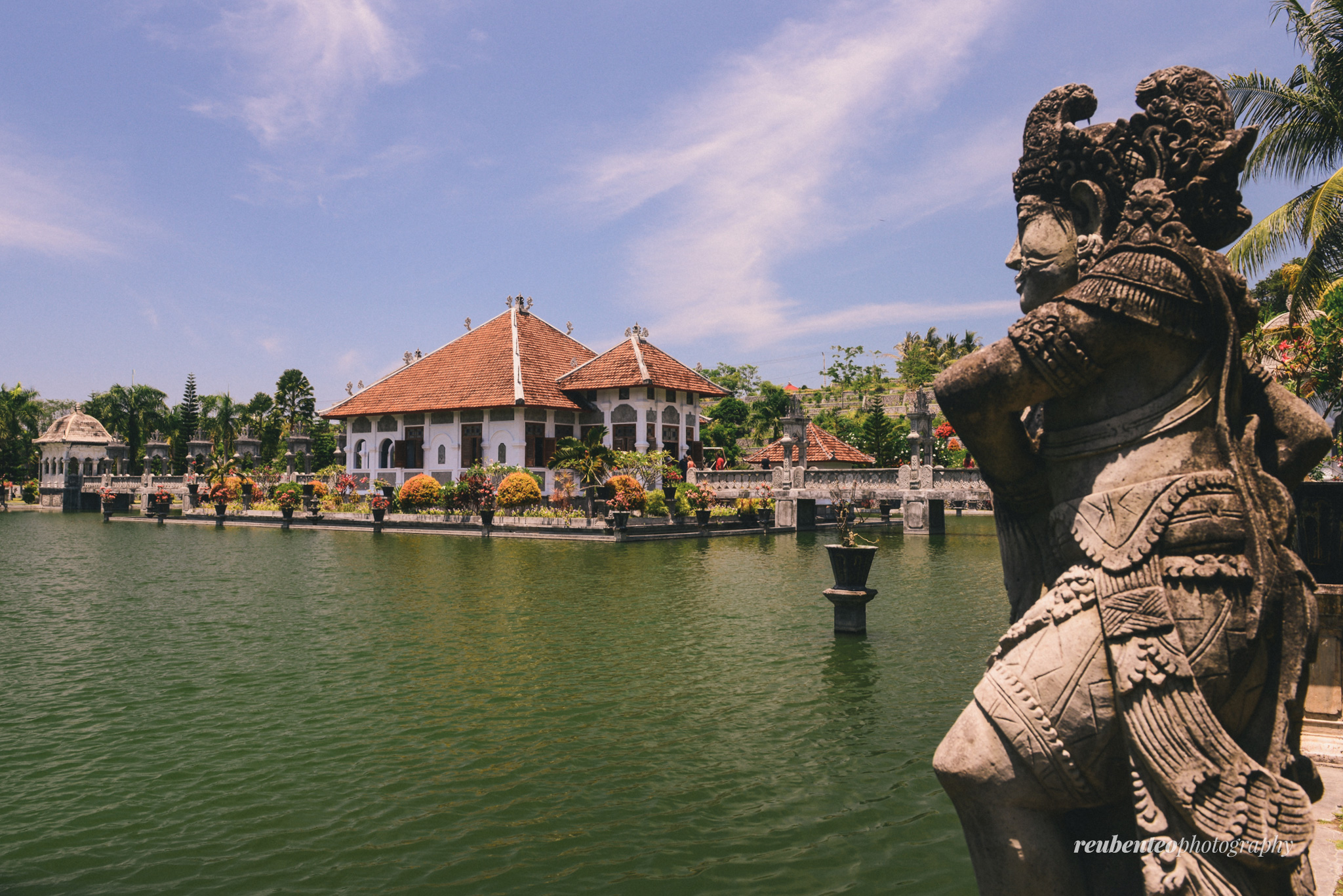 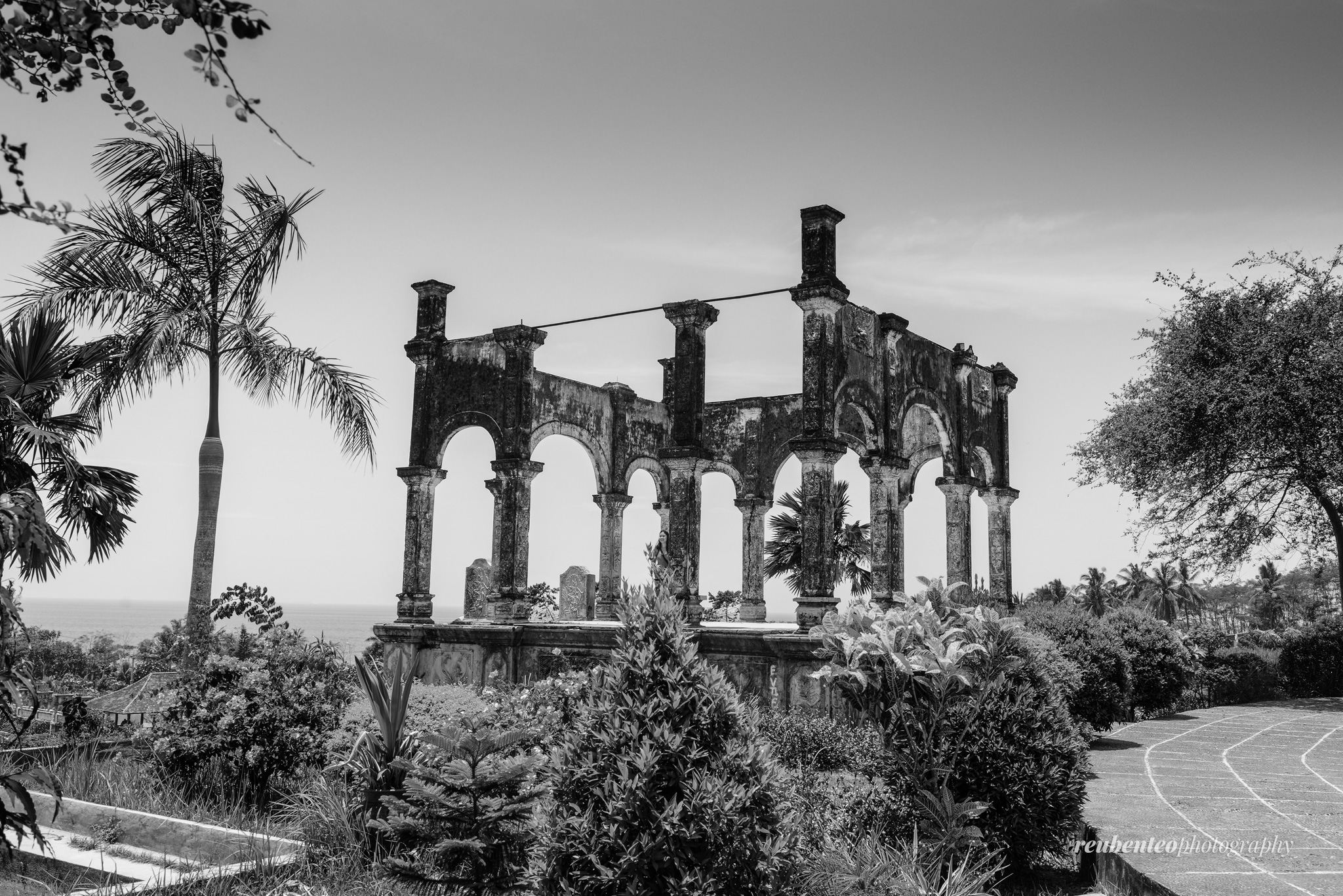 The palace has taken a lot of destruction over the years. During World War II, Japanese troops dismantled the iron bars for weaponry. Then subsequent eruptions of Mount Agung in 1963. Followed by the Seririt and Culik earthquakes of 1978 that severely damaged the structure and grounds to the extent that for approximately 25 years, the buildings were abandoned without any reconstruction effort made. Fortunately, in 1994, the government surveyed the damage and began to repair the park and renovate the buildings and reliefs. Fundings from the World Bank helped to kickstart the repair works for the fences, gates and the pools.