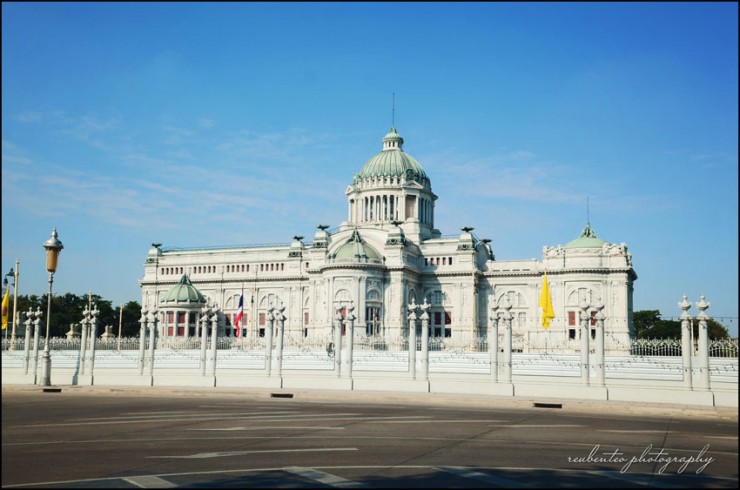 Our next destination is the Dusit Park, located at the Dusit district. This is a serene area of Bangkok and the political centre of Thailand. There are a few major tourist spots in this area, including Chitralada Palace, Dusit Zoo, King Rama V Equestrian Monument, Vimanmek Mansion and more. It’s connected to the Rattanakosin Island by the Ratchadamnoen road (literally ‘Royal way for traveling’). So while you’re in the cab heading there, you’ll see a lot of Thai traditional monuments, nicely decorated lamp posts and also, you will pass by the United Nations building as well.

Our main goal for the afternoon was to see the famous Vimanmek Mansion. It’s located inside the compouds of the Dusit Park. Vimanmek Mansion, famously know for being the world’s largest golden teakwood mansion with its elaborate architectural style reflecting a western influence. Do remember to bring along your Grand Palace ticket, to get to visit the mansion for free. Also, do remember they have a similar strict dress code as the Grand Palace as well. 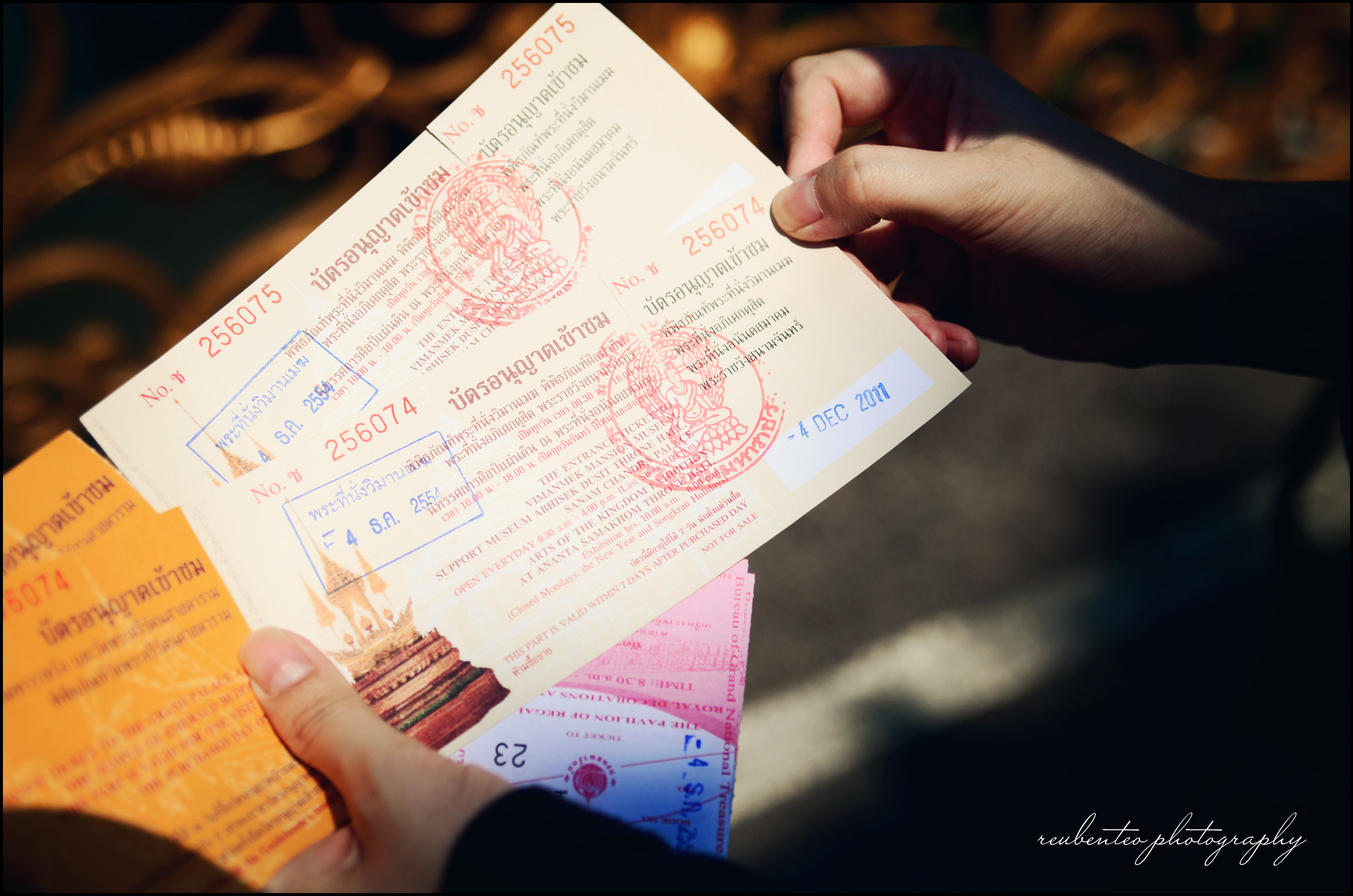 However, we weren’t allowed bring in our cameras and even our bags. Upon walking towards the Mansion, you will be lead to a building where all the lockers are. You will be instructed to leave all your belongings except your wallet in the locker until you have finished visiting the mansion. But all is not lost, you will still be able to take pictures of the beautiful exterior of the mansion. 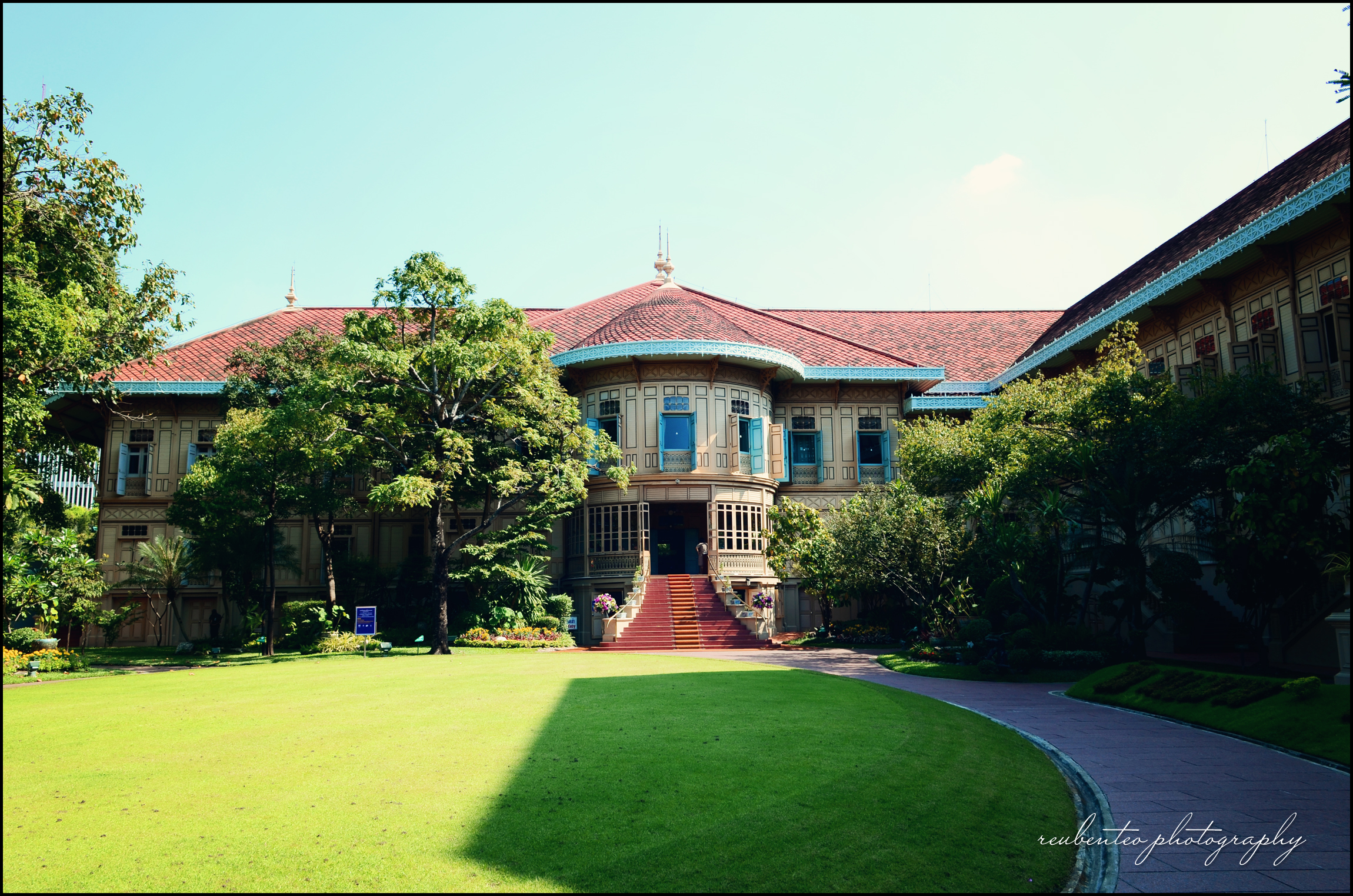 Inside the mansion, you will see the luxury items of the King and you can imagine what the King’s lifestyle was like during that era. Items like royal paintings, type writers, beautifully crafted closets, carpets, furniture, antique vases and more were there just to name a few. The mansion is extremely huge and it has about 72 rooms which we wouldn’t be able to visit all of them. It was built in 1900 but the King stayed there only for five years. In 1932, Vimanmek Palace was used only as a storage place of the Bureau of the Royal Household. 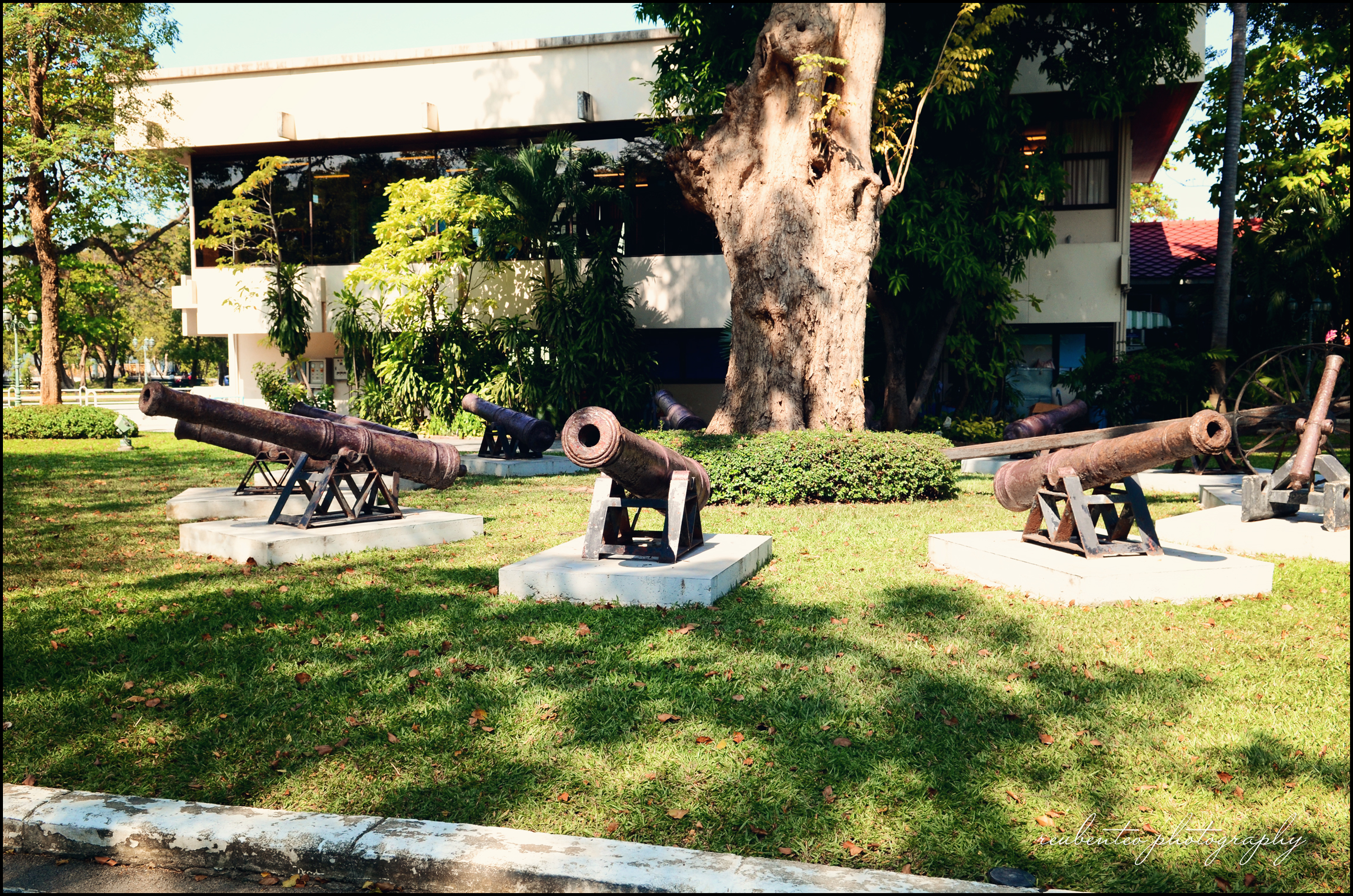 After visiting the mansion, we took a stroll along the huge Dusit Park. The landscape in the park was very well kept and maintained. There were some odd decorations in the Park, like canons and even Chinese designs as well. We also passed by a few museums along the way. There were the 2 buildings that houses the photography galleries of the current Thai King, King Rama IX. Then we reached another structure. This structure was an ornate building with beautifully carved floral motifs on panels adorning the gables and eaves. 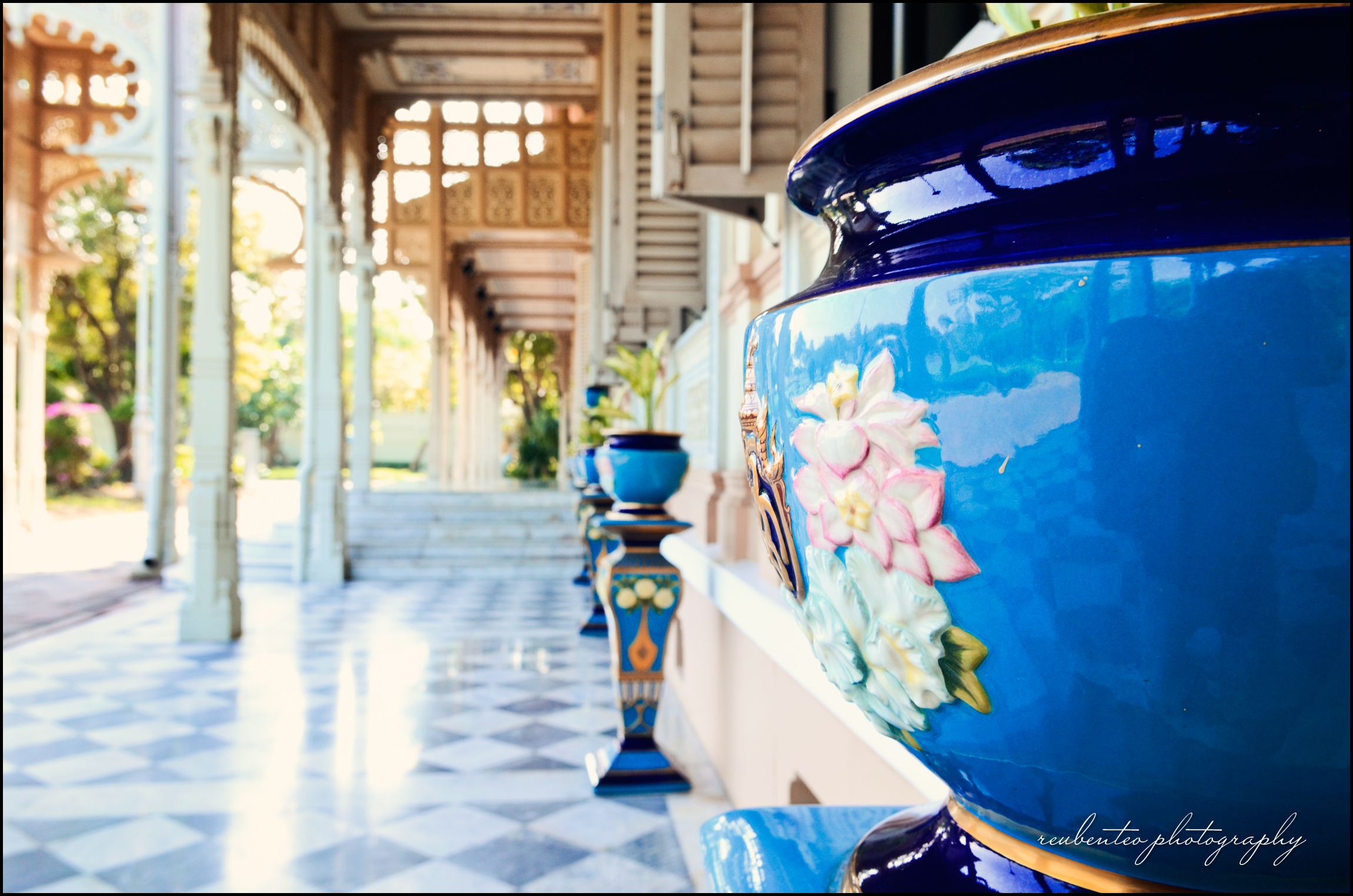 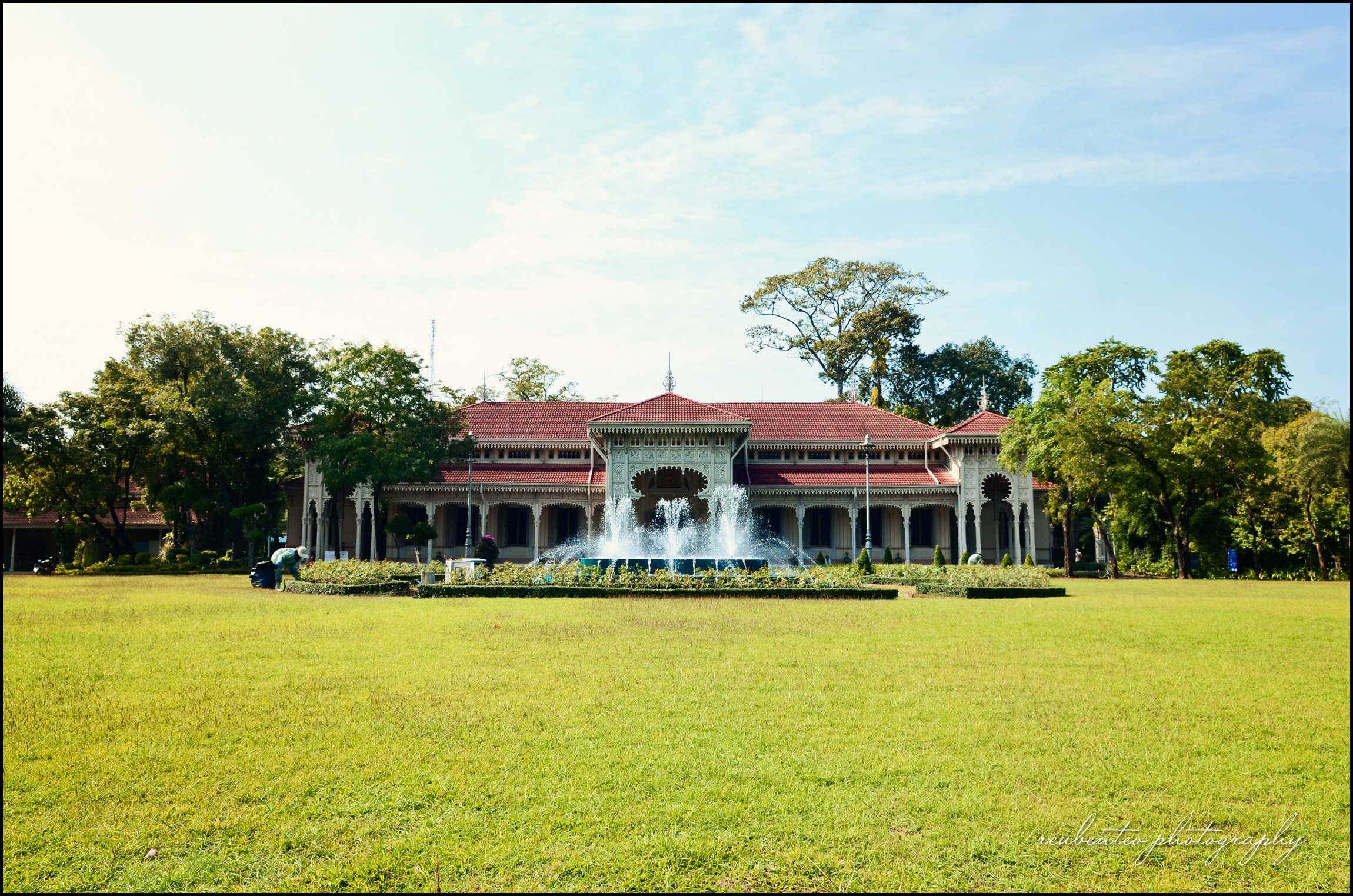 This structure is called the Abhisek Dusit Throne Hall. The building is filled with elaborated designs and plush carpeting. During the Dusit days, it is where foreign dignitaries used to come to pay homage to King Rama V, but it is now filled with exhibits of Thai handicraft. 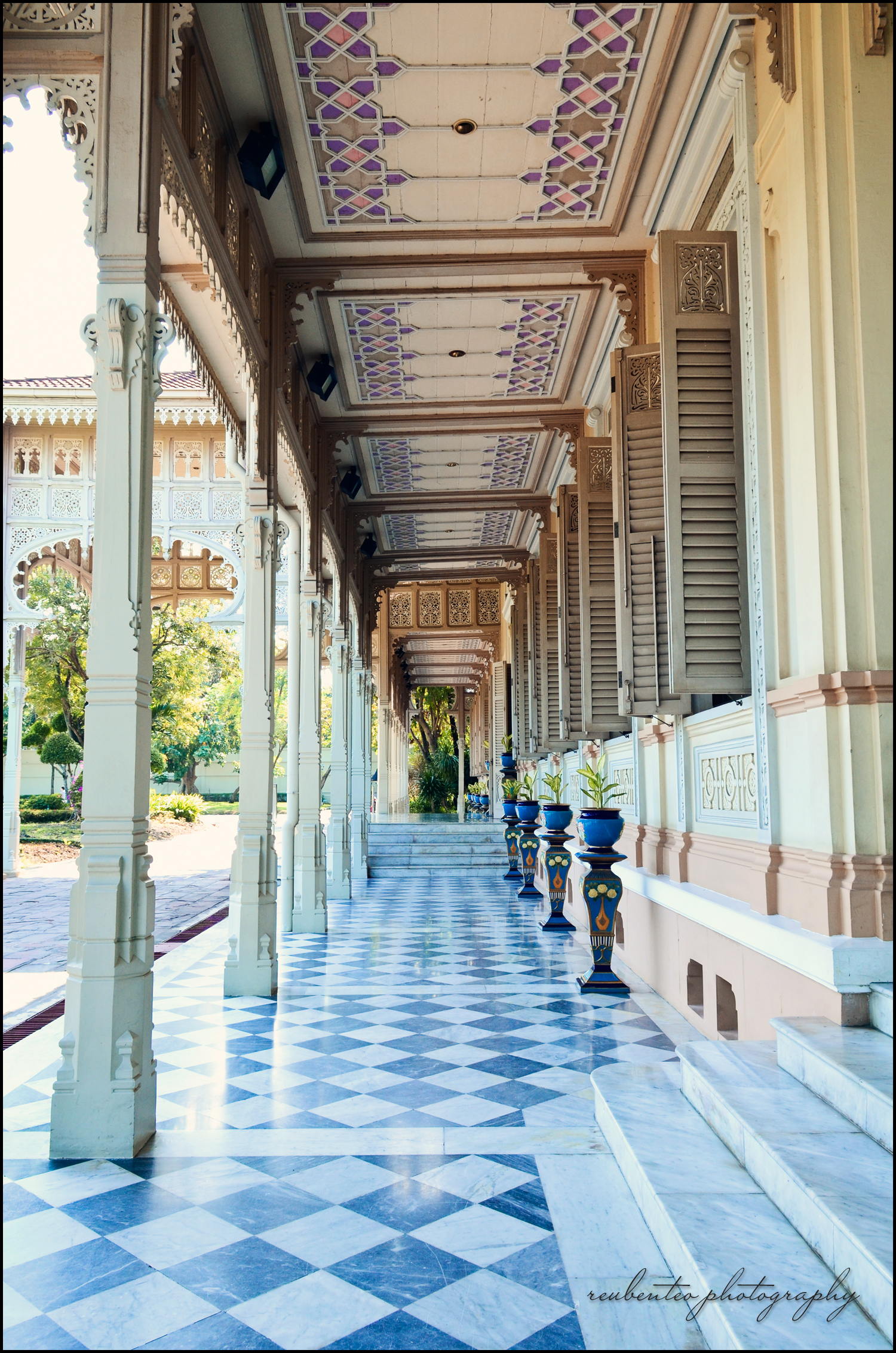 Fann personally adored this magnificant structure. The high profiled designs and detailed crafted pillars leave this place as one of the most beautiful among the Dusit Park monuments. The ceilings itself was already a great portrayal of how admirable the Thai architects were during those days. 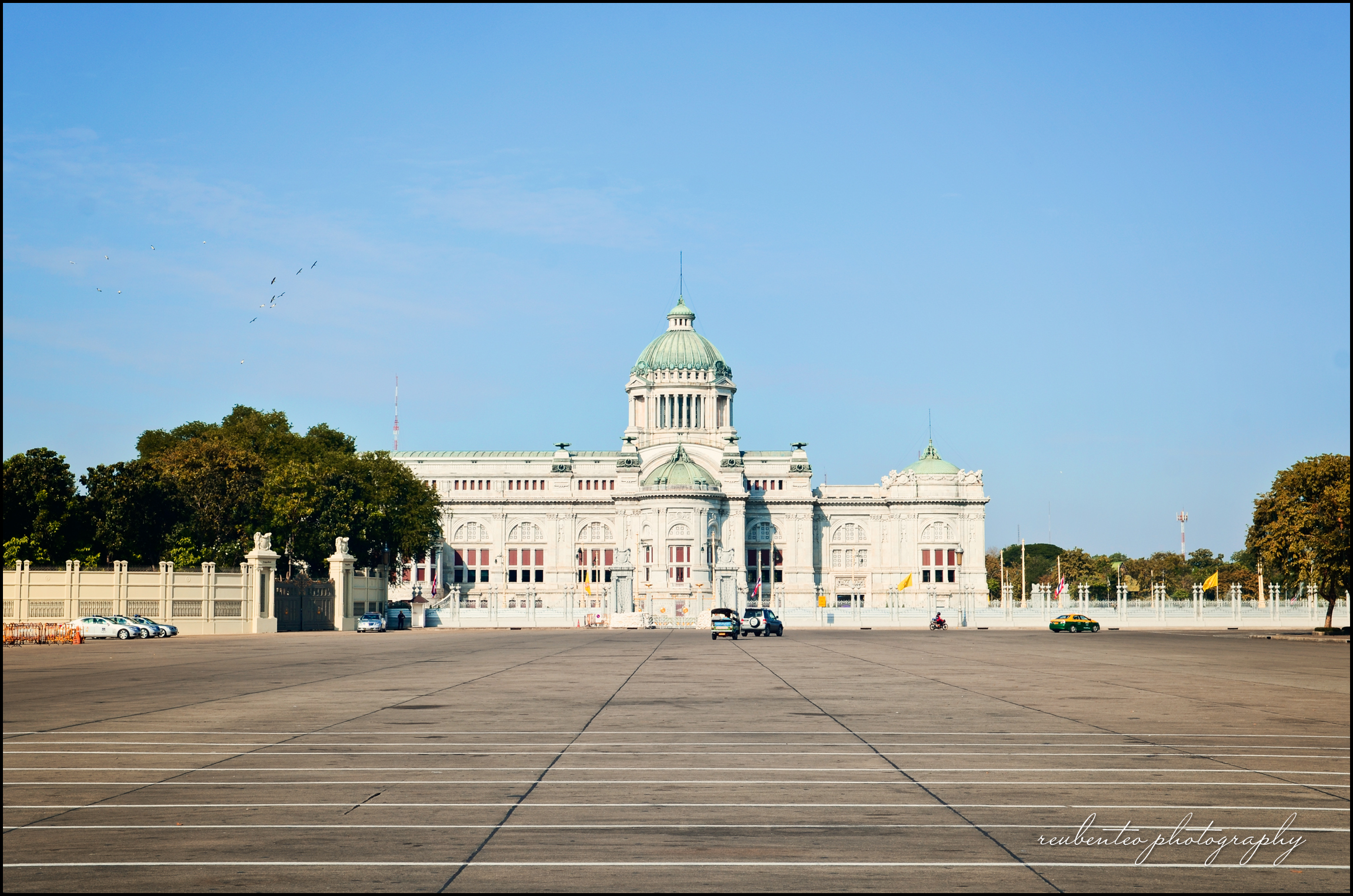 After the throne hall, we headed to another beautiful structure, called the Ananta Samakhom Throne Hall. This beautiful and majestic marble building was the former reception hall within Dusit Palace in Bangkok, Thailand. It now serves as a museum and is from time to time employed for certain state occasions. 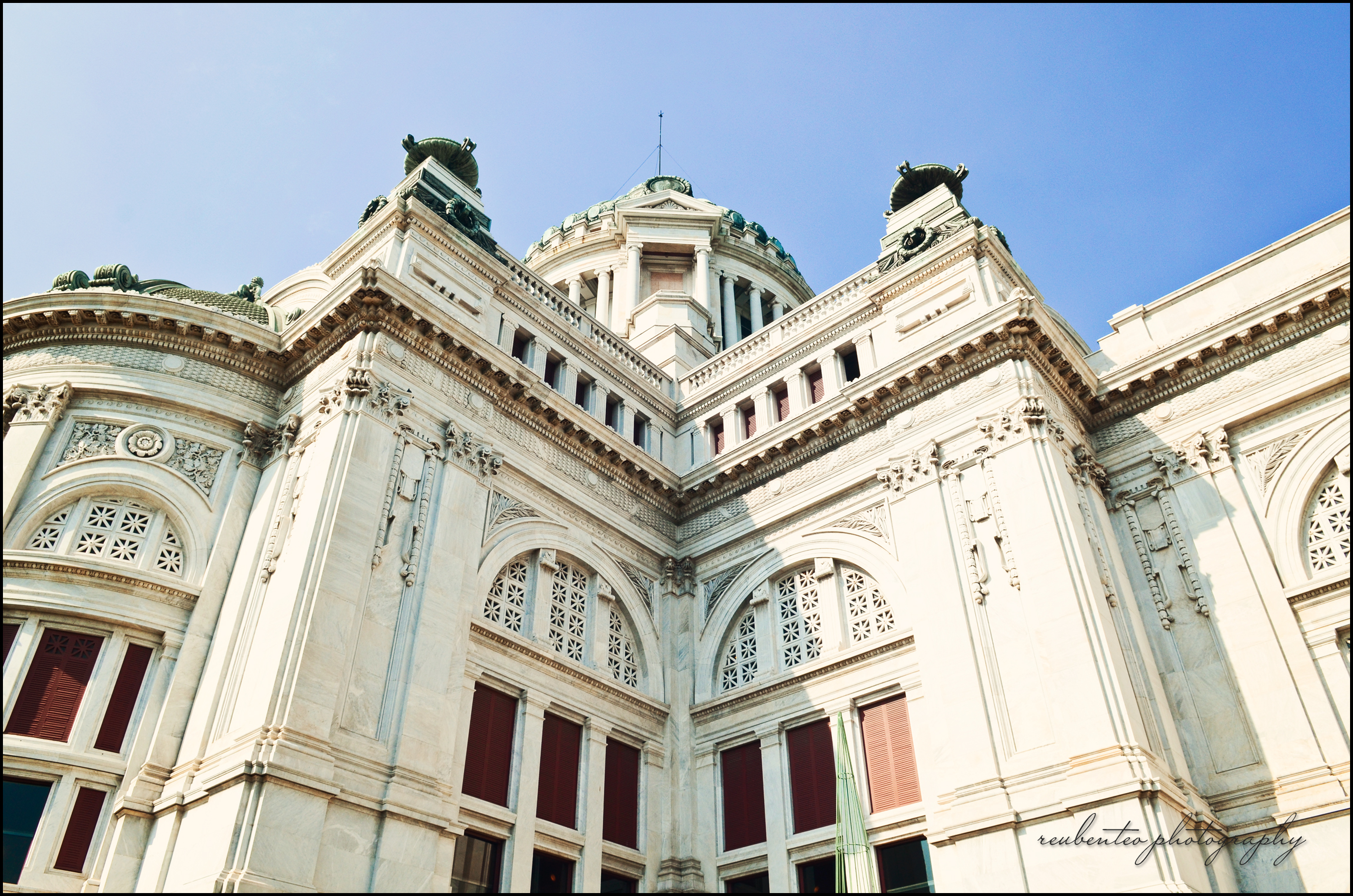 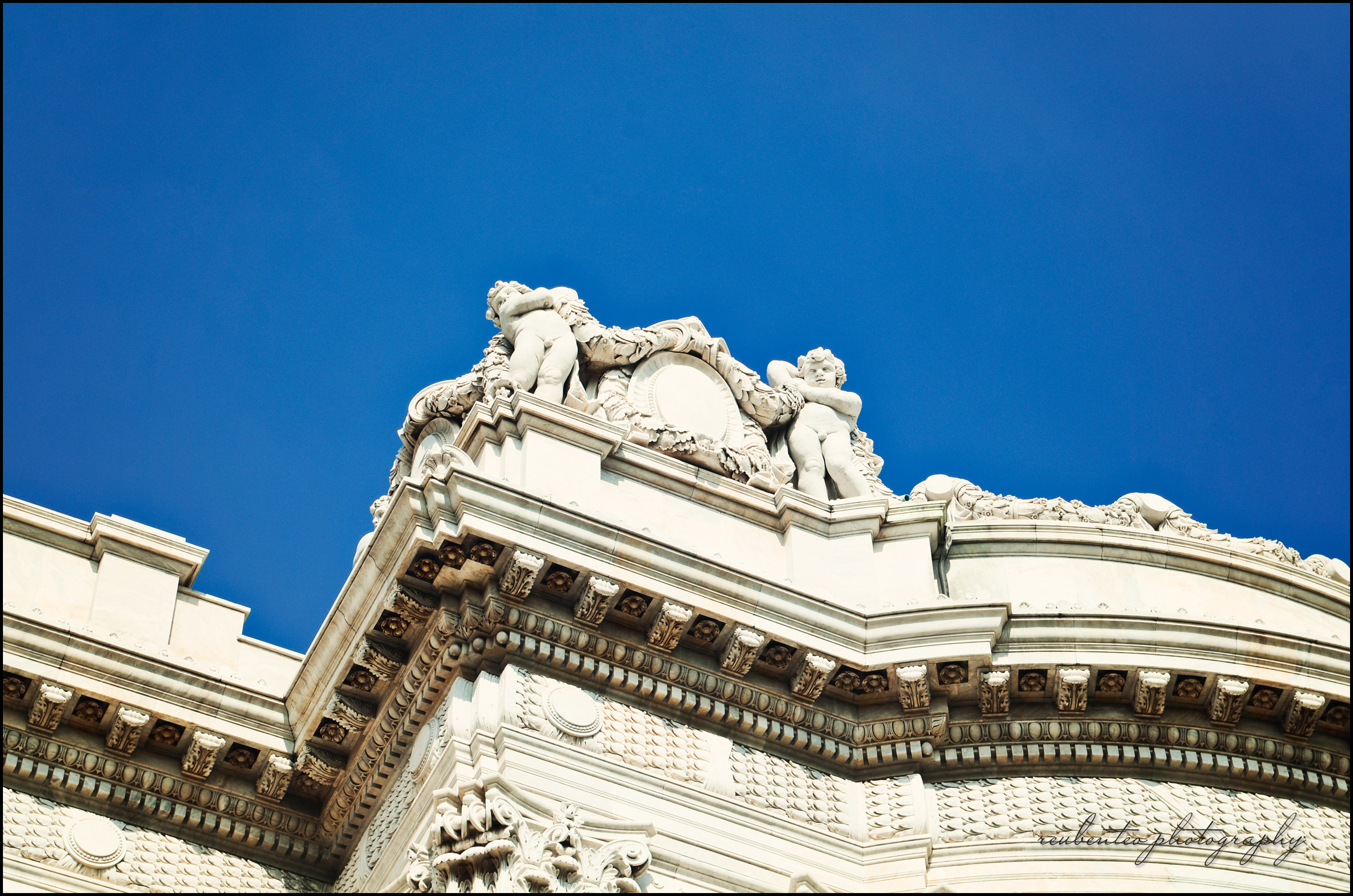 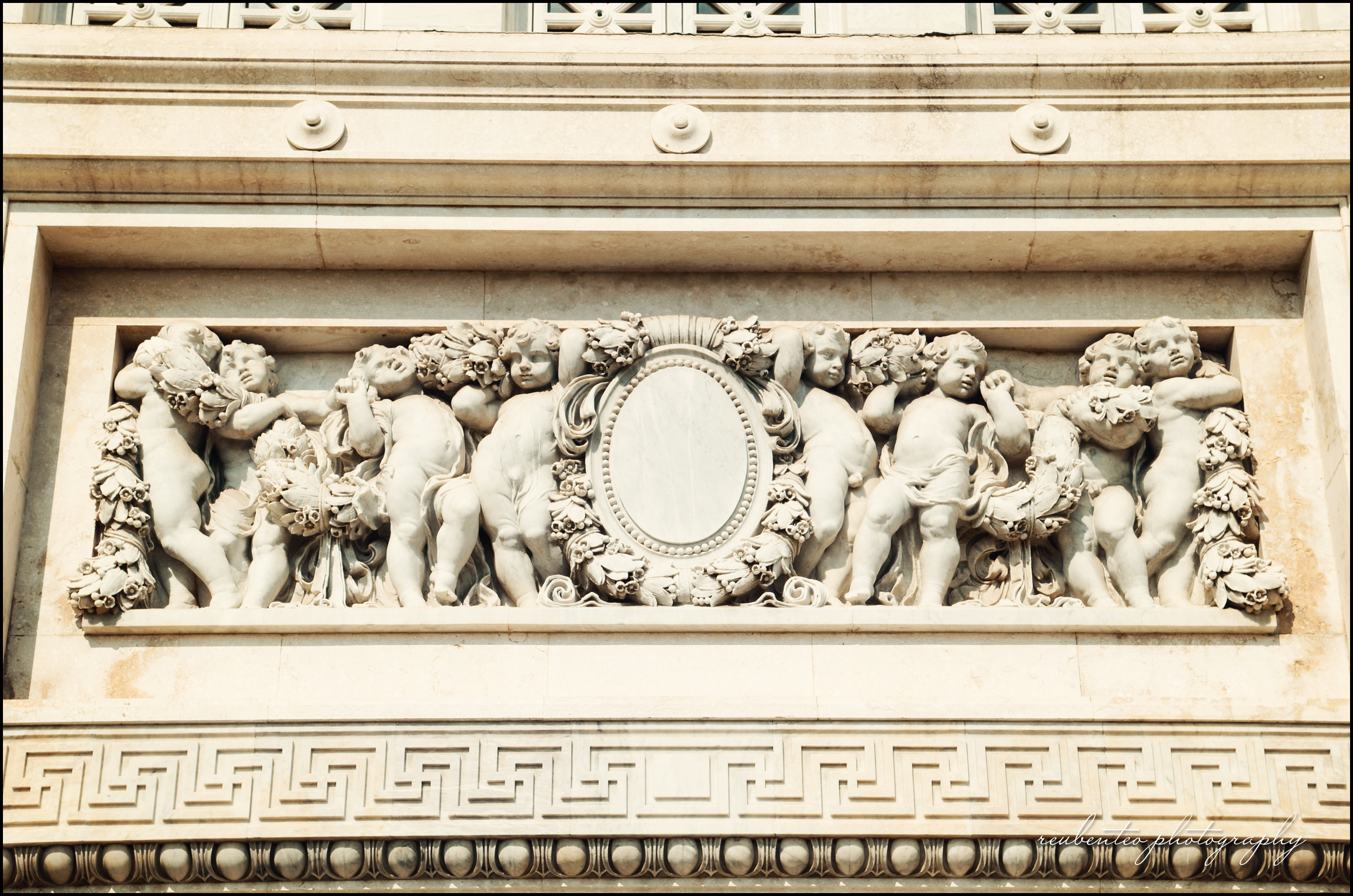 The Ananda Samakhom Throne Hall was constructed in the Italian Renaissance and Neo Classic style of architecture. The exterior is decorated with marble from Carrara, Italy. This magnificant building has a large dome in the centre surrounded by six smaller domes. The most fascinating of all, the domes and walls are covered with paintings by Professor Galileo Chini and Carlo Riguli depicting the history of the Chakri Dynasty, from the first to the sixth reign. I couldn’t get enough of this building. I couldn’t get my hands of my camera’s trigger. It stands out amongst all of the buildings in the Dusit Park. 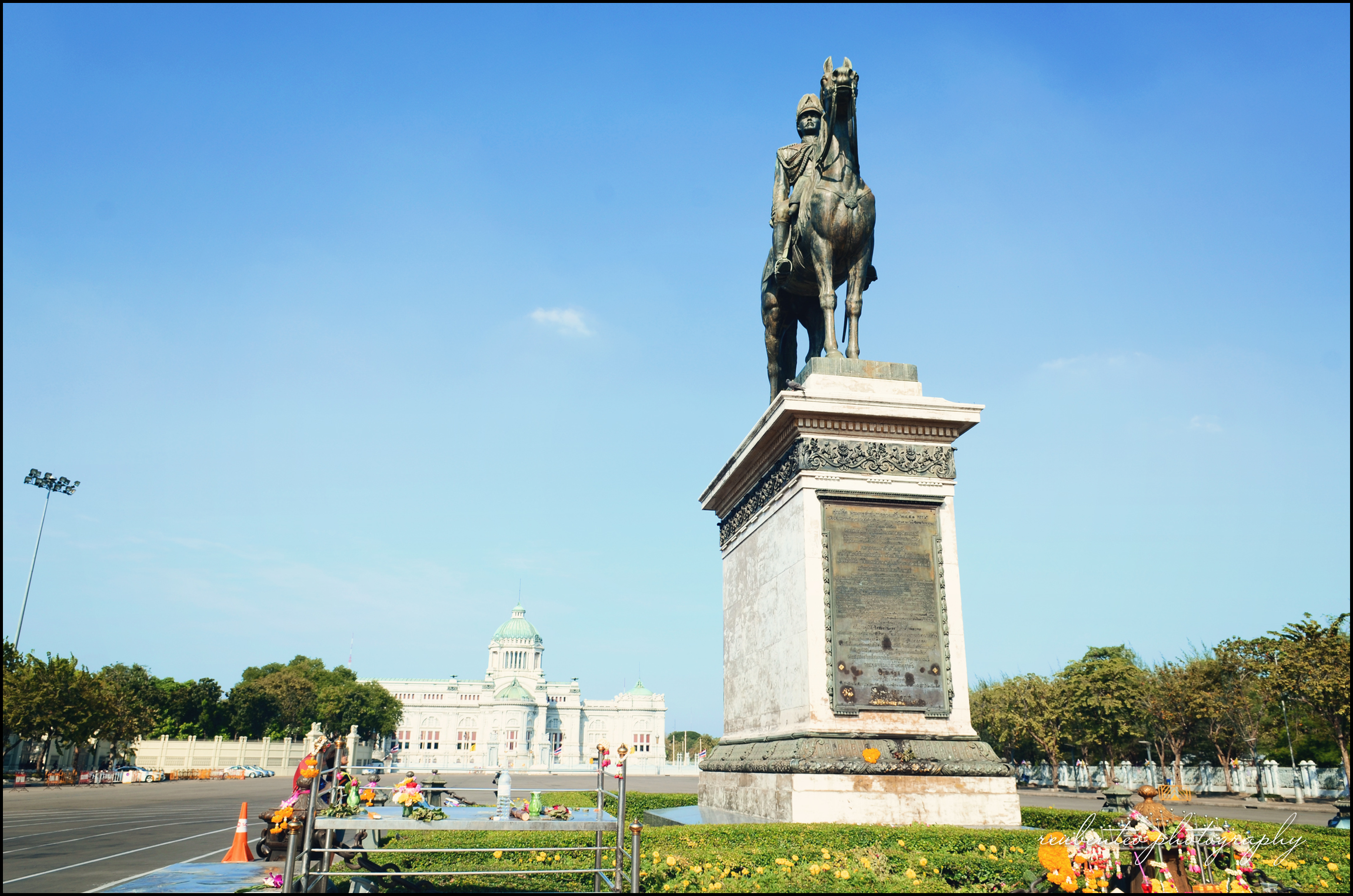 As we left the Ananda Samakhom Throne Hall, we walked towards a huge statue which is situated right in the centre of the road. This was called the King Rama V Equestrian Monument. It is a huge monument of King Rama V riding on a horse facing the centre of Bangkok. One fascinating thing we saw while we were there, the drivers upon nearing the statue, they would push their palms together and give blessings to the King. It was a remarkable sight and YES while they were driving. 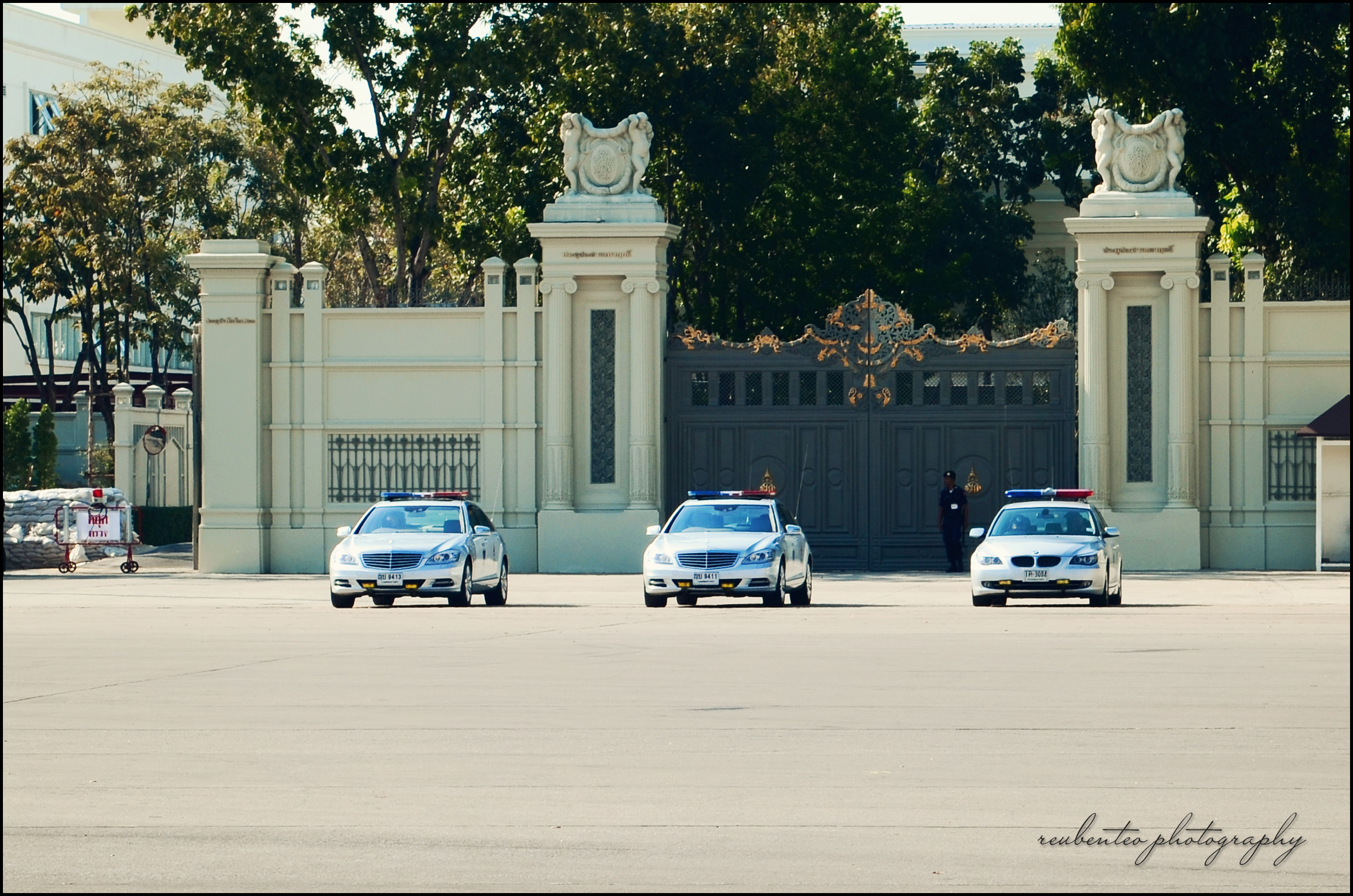 Gates to the Chitralada Palace

Talking about the King, have you wondered where the current King resides? I’ll give you a hint here. There are a few Mercedes-Benz & BMWs with sirens on their top. 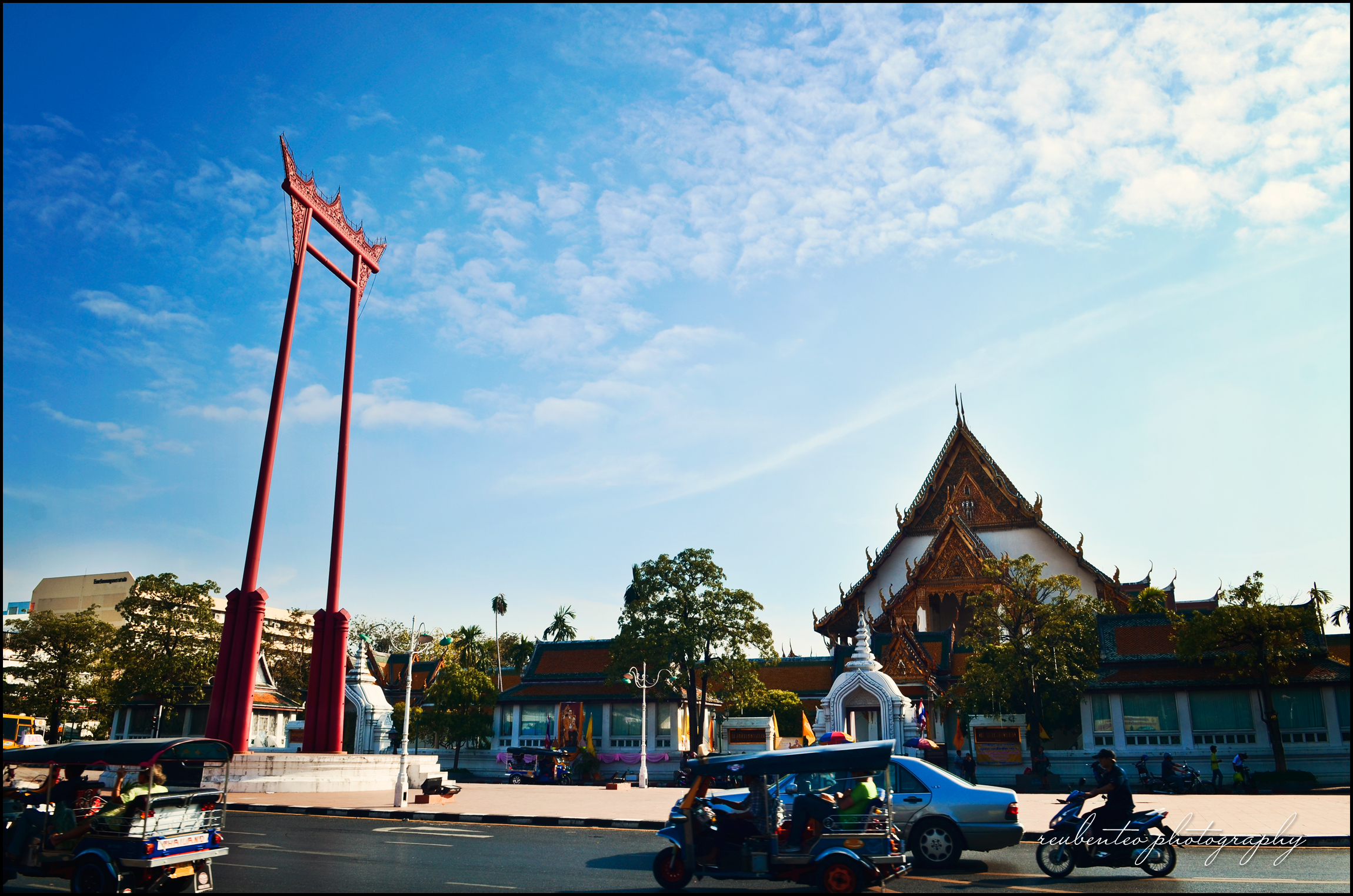 After a long walk along the Dusit Park and the hot weather of Bangkok, we quickly grabbed a cab and had it take us to some place to eat. We landed ourselves at the Giant Swing. It is a religious structure located in front of Wat Suthat temple. The Giant Swing was used for a ceremony that the Thai people used to have. However, asa stated in this content, due to some several fatal accidents, it was discontinued. This structure was damanged due to lightning strikes and it was rennovated and moved to it’s current location to make way for a plant. 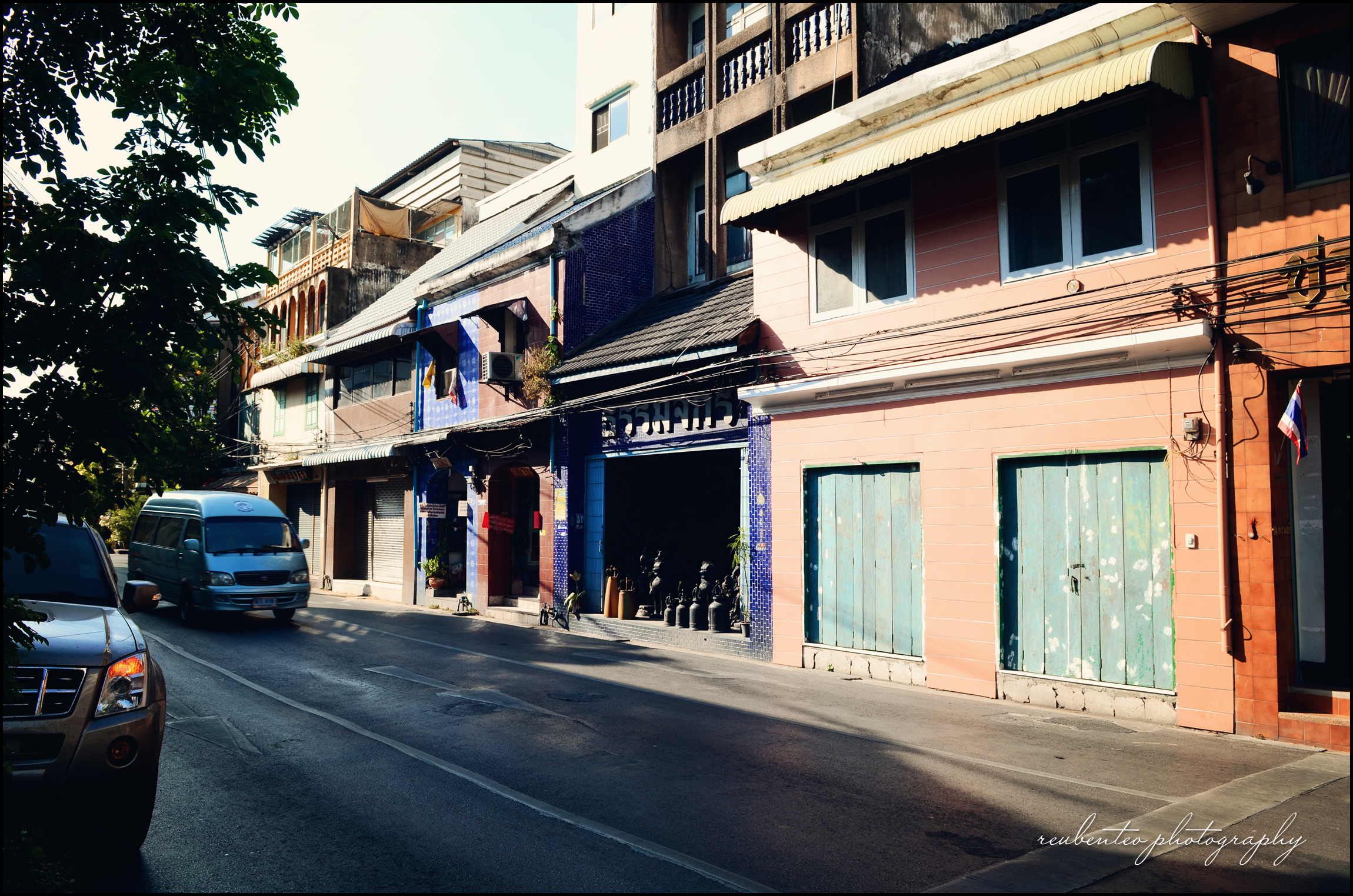 After taking some shots of the Giant Swing, we headed to a little small adventure I had planned initally. I’ve prepared a map of this place. This district is called Sao Ching Cha. Oddly, this place is filled with lots of delicious food and desserts. Among all the food we can find here, I only wanted to try the two things famous here. Which is the Mango Sticky Rice and the Coconut Snowflake. 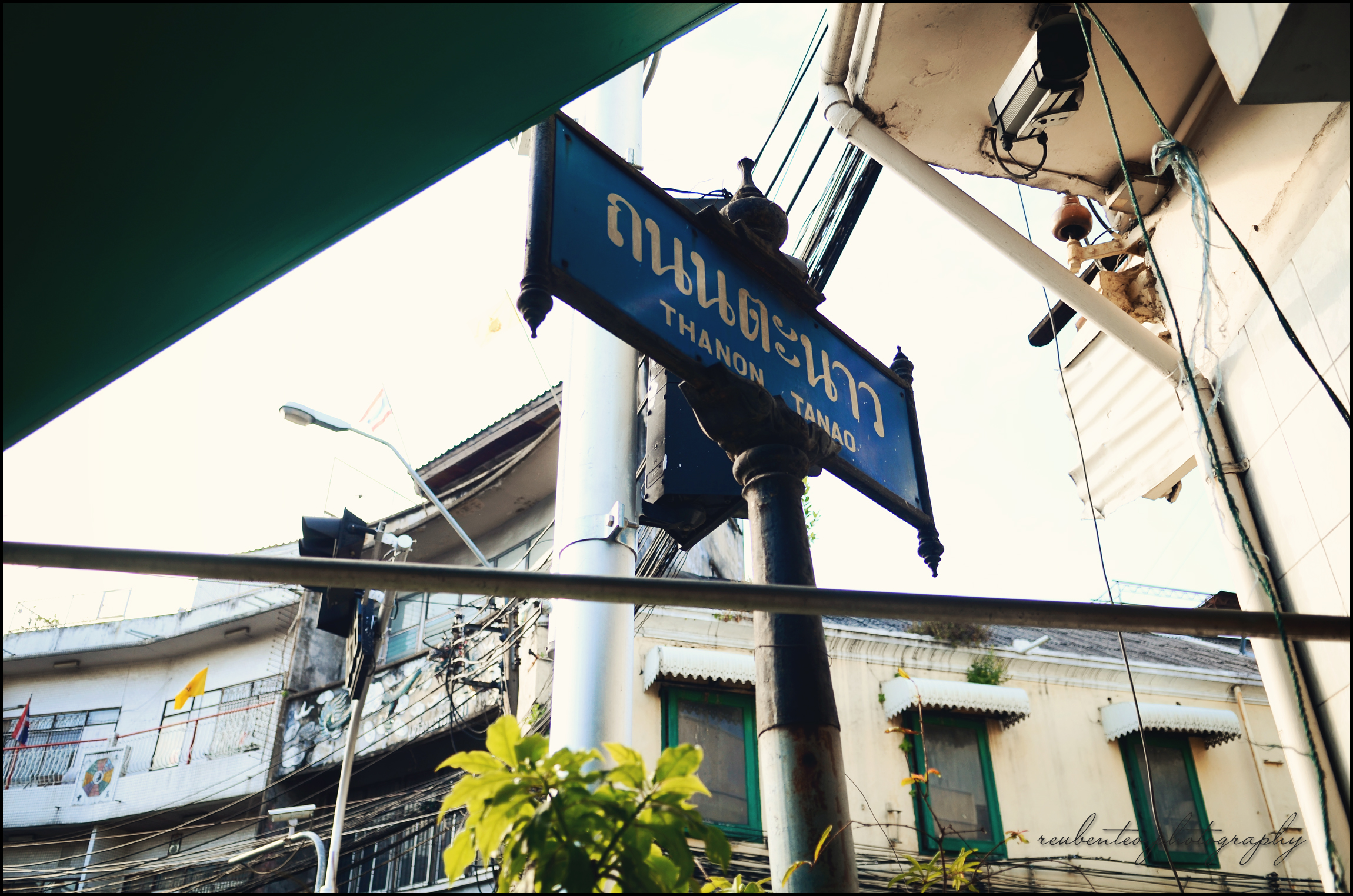 Yay! We have found Thanon Tanow!

With my food map in my hands, we navigated ourselves to the Mango Sticky Rice shop called Kao Neoo Korpanich. It was located at the Thanon Tanow Road. The family has been making sticky rice with mango at the same location since 1932 (75 years), and even today their menu consists of the same specialty. But, after so much research and high hopes, until we found out that it was closed on that day. It was because the next day was the King’s birthday and we didn’t get to try it. It was so sad. We moaned so loud when we reached it’s closed doors. 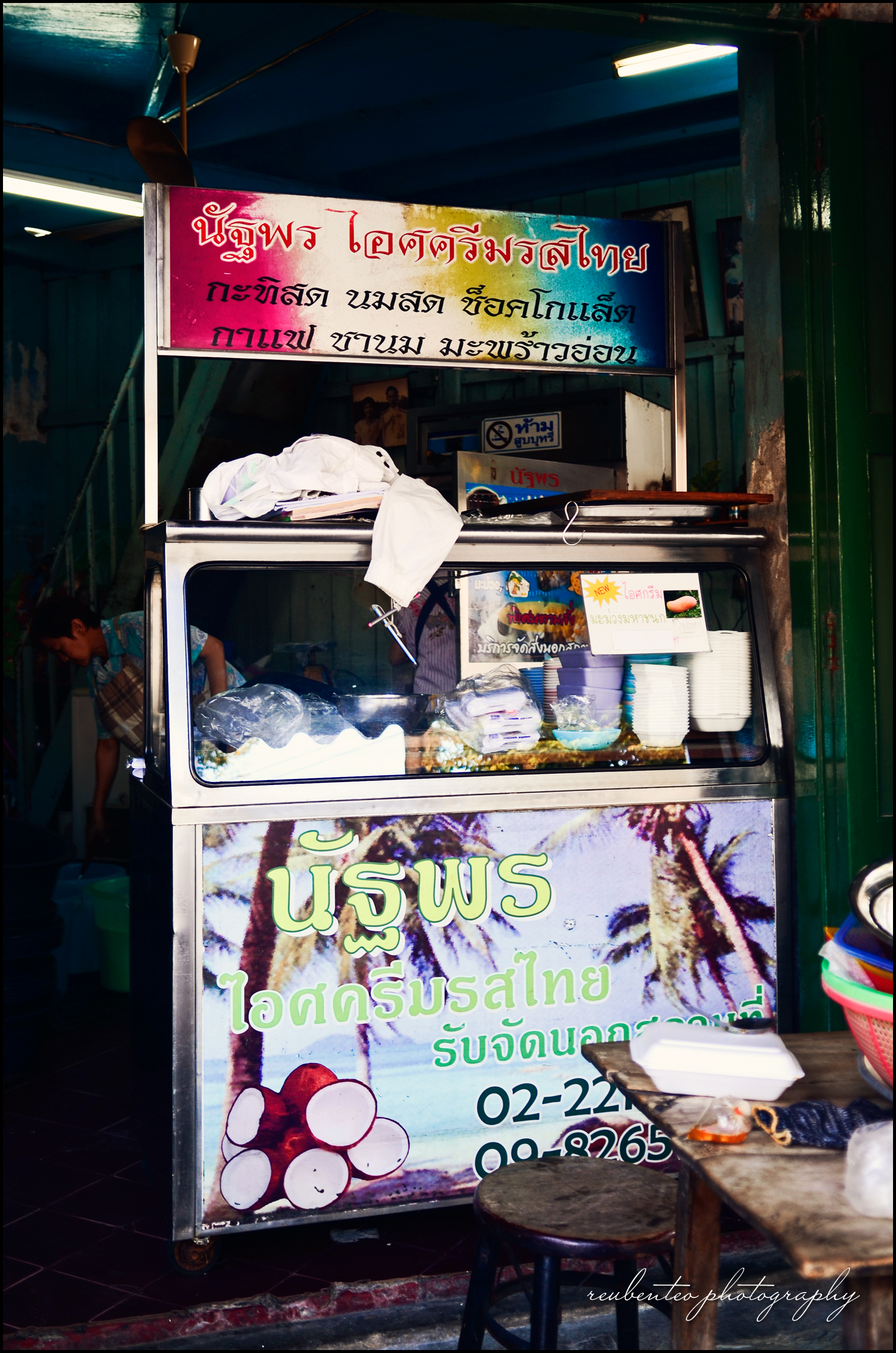 Nevertheless, with loads of frustration, we tried to find our way to the famous Coconut Snowflake shop called Nattaporn Ice Cream. It is located at the corners of a shoplot at Thanon Phraeng Phuton. This shop has been making ice cream for almost 60 years. As we reached the shop, we were confused. The shop looked rather dark with no chairs or tables for us to sit. All we saw was that a lady mopping the floor. I walked towards the aunty and asked if it was the ice cream shop? The lady answered yes but also told me they were closed for the day. I looked at Fann and she looked back at me with her huge eyes. We felt so depressed and sad. All the way form Malaysia with research, we couldn’t eat both of the things we were looking for. 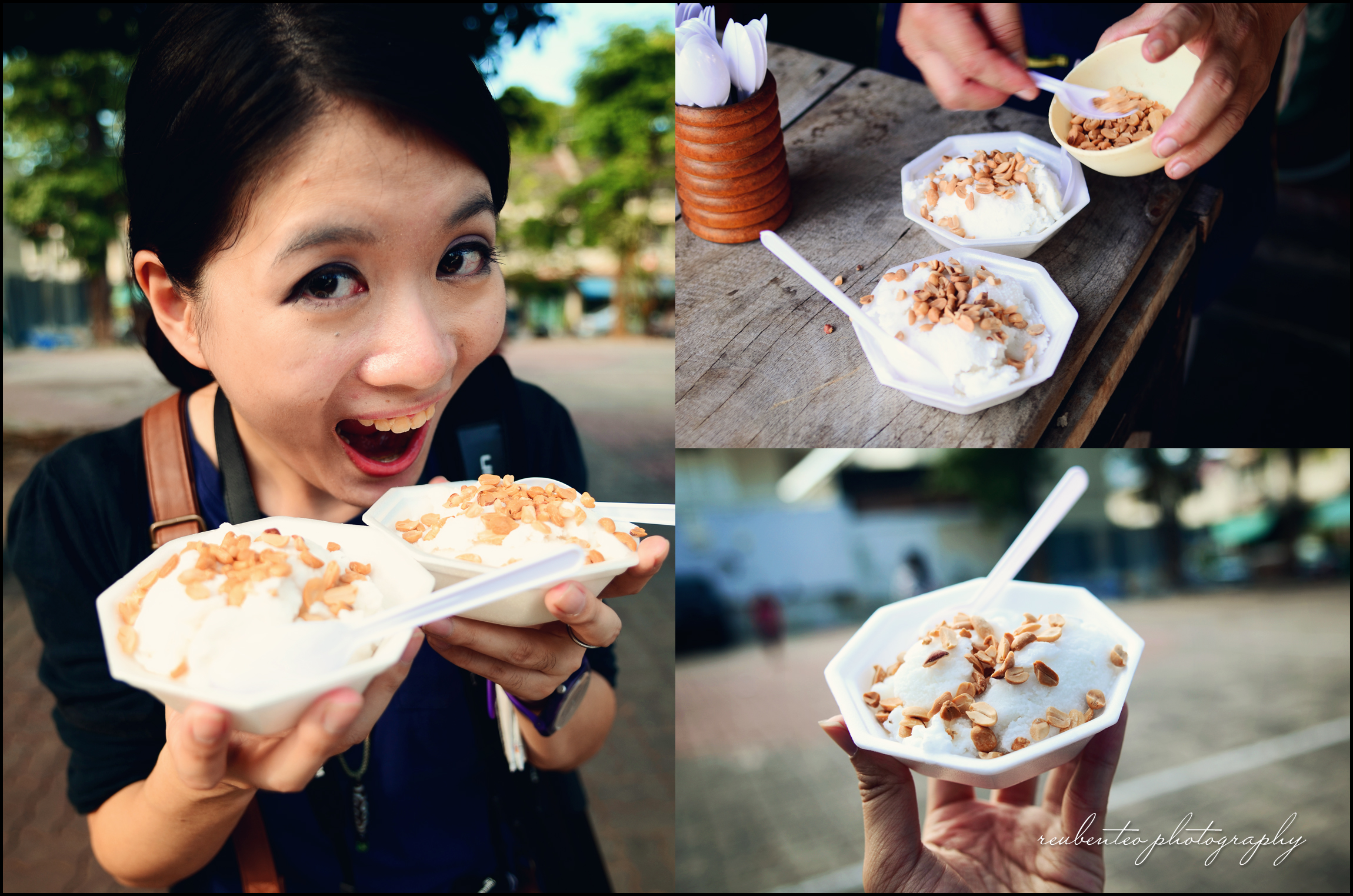 Suddenly, the aunty came out to us and told me that she would make each of us a bowl of ice cream. We were so happy! As the aunty made us ice cream, she told us to enjoy but had to take it away to eat. We paid her and thanked her as we took our ice cream to the nearby park and enjoyed it. It was DELICIOUS! 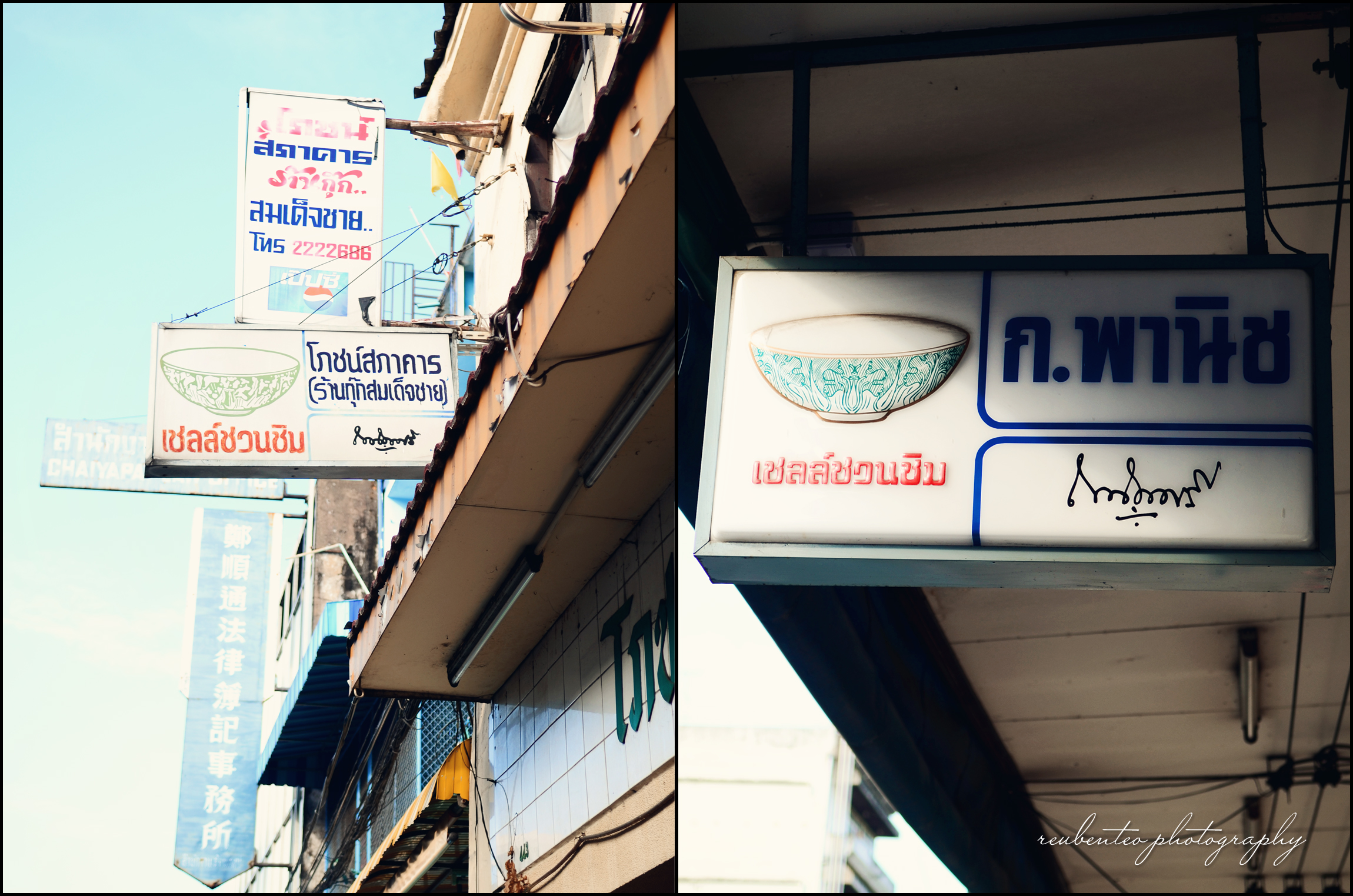 Last but not least, this is a small tip for all tourist. If you happen to see these weird looking signs at the restaurant or eating places, you would be sure that these are quality food. It is actually the Shell Shuan Shim, Thailand’s Quality Logo. Similar to the Michelin stars awarded to restaurants in France, Shell Shuan Shim is awarded if a restaurant or company produces excellent tasting products. The literal translation on the sign is “Welcome to Taste”. 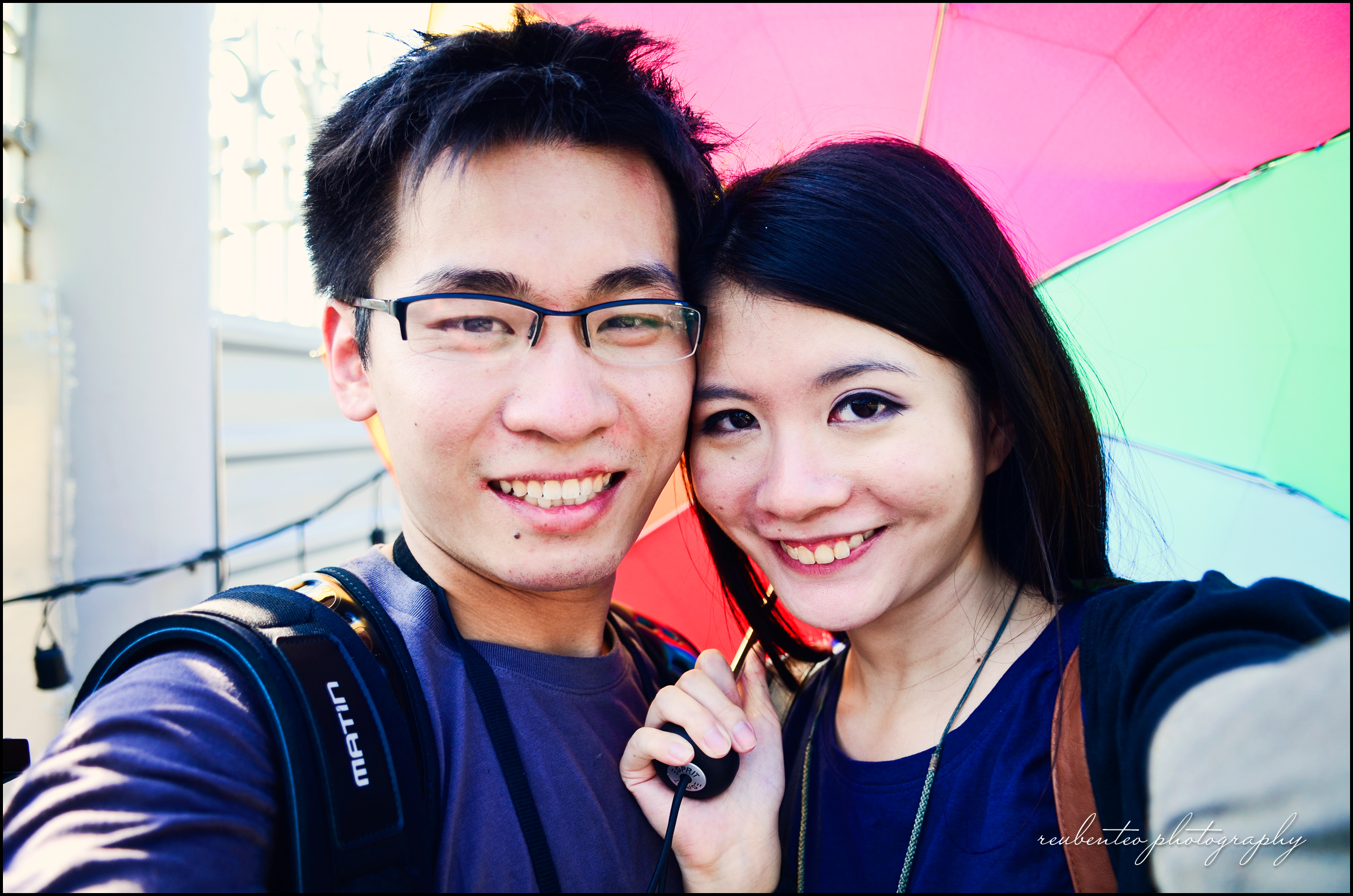 We were so happy and felt very satisfied. After the ice cream and a short visit to the nearest 7 Eleven, we headed back to the hotel by cab. It was really a tiring but satisfying photography trip from the Grand Palace to the Dusit Park to the Giant Swing and then lastly the Ice Cream by the aunty with the big heart! 😀