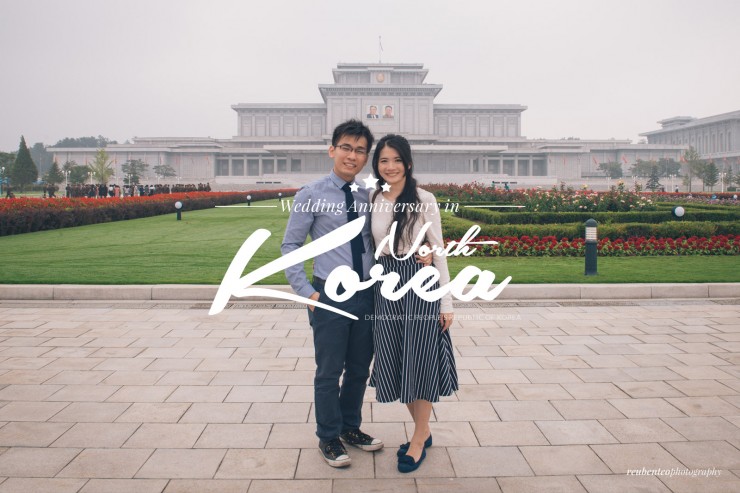 Time sure flies when you’re having lots of fun. It has already been 6 years since me and my wife first met and started dating. September 2014 marks our 1st Wedding Anniversary. After being together for so long, it’s become more apparent that Fann is the most beautiful person in the world. Through these years, we’ve done a lot of interesting things together, travel to weird places together and done quite a number of dumb things as well. She tries her best to find interest in what I enjoy without hesitation and does her best to fit my shoes and to enjoy whatever wacky decisions and plans I have installed for ourselves. Well, it must be odd that it seemed that I have purposely planned to celebrate our wedding anniversary at one of the world’s most secretive and unique country. But, I like to go for unique places for everything. For instance, for my bridal look, I had opted for Bridal Salon and Tuxedo rental, because I knew their collection was out of the world.

Anyway, moving on. The reason I chose to go during September was because the agency that organised our tour could only charter the flight to Mount Paektu during this time in conjunction with the Aviation Group. So, everything was just a great coincidence and Fann told me that it would be hard for me to plan for our next year’s anniversary since I have set the benchmark so high.

Anyways, it felt great to have spent our anniversary day in the DPRK. Just the sound of saying ‘We spent our anniversary in North Korea’ sounds as awesome as ever. In fact, we were quite surprised as to what was prepared for us during this day, especially at night. It was a beautiful Sunday morning, we toured one of North Korea’s most important buildings, known as the Kumsusan Palace of the Sun. This gigantic structure serves as a mausoleum for both the president Kim Il-sung and the general Kim Jong Il. That means we get to dress up extremely nice and formal and pretend that we are celebrating our anniversary while touring the city. *BONUS POINTS FOR DRESSING NICELY DURING TRAVEL* Mrs. Chen was so sweet, she complimented on how handsome I looked that day. It really made my day. Also, we went to places like the Chongsan Cooperative Farm, the Nampo West Sea Barrage, and then a game of bowling at the Gold Lane Bowling Alley. We then took a stroll at the Kim Il Sung Square and it was indeed an eye opener. 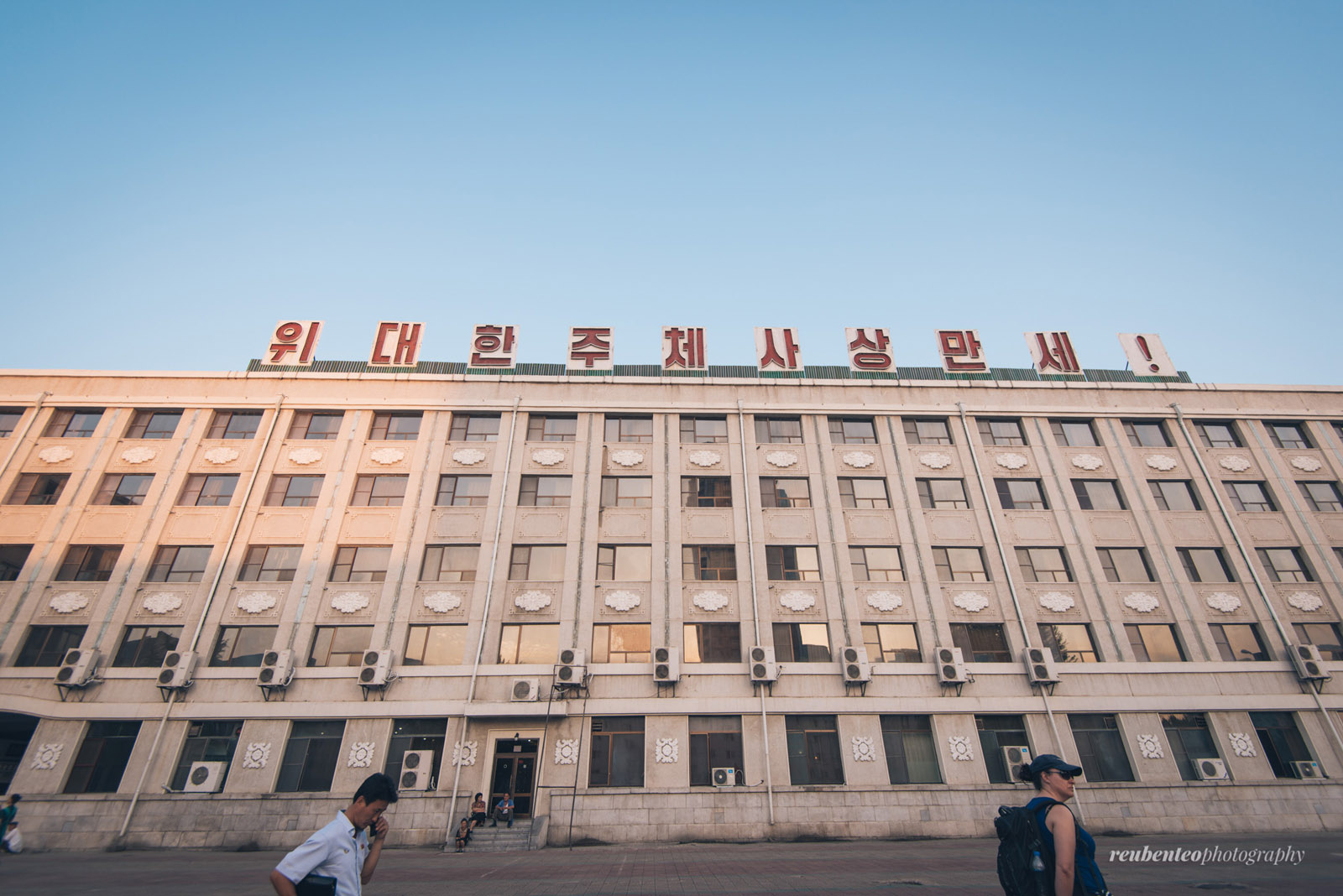 Mr. Jong on the phone constantly on that day

I noticed one of our guides, Mr. Jong was a little distracted during the stroll. He seem worried and was always on his phone talking to someone. As we reached the Pyongyang Grand Theatre, Mr. Jong came up to me and asked if we wanted to have our dinner at this great restaurant. He also asked if we wanted a separate table from the group or share one table with the others. So, I thought since it’s our anniversary, having a separate table would be extremely nice. Then he continued on his phone. So I guess he was busy planning or making a reservation for our special night. In fact, we weren’t expecting much. What I expected was maybe a small 2 person table with some really nice food. When the bus came to pick us up, we headed for this dodgy looking building. Architecture in Pyongyang look almost similar. It was difficult to tell an office apart from a restaurant. We thought we were going to a museum. Once we got off the bus, a Korean girl dressed in beautiful traditional Korean gown came up to us and gave Fann a huge bouquet of flowers. We were all in shock.

Then we went into the building. There, we realised that it was actually a restaurant. Then we were all led into a large private room. Our jaws dropped when we saw what tour guides have arranged for us. There were two tables and one was decorated with flowers and peacocks. There was a huge cake, lots and lots of beautifully decorated food and a bottle of wine. We were so surprised and touched by everything that they had done for us. As we sat down, everyone was getting excited and started taking photos of us. Fann was so happy and when she looked at me, I told her I had no idea about this. When dinner started, we tasted every dish that was served. The food was just amazing. We gave a small toast to everyone. Then, Mr Jong told Fann to wave to the beautifully dressed girls who were standing in front of the stage. Then there was music and they started singing and dancing. It was an extremely entertaining and exciting night for us. Sharing food and our anniversary with our newly made friends from across the globe and enjoying the beautiful waitresses dancing and singing. Too bad we changed back to our casual clothes in the afternoon and didn’t dress up for the awesome dinner that our guides have planned for us. 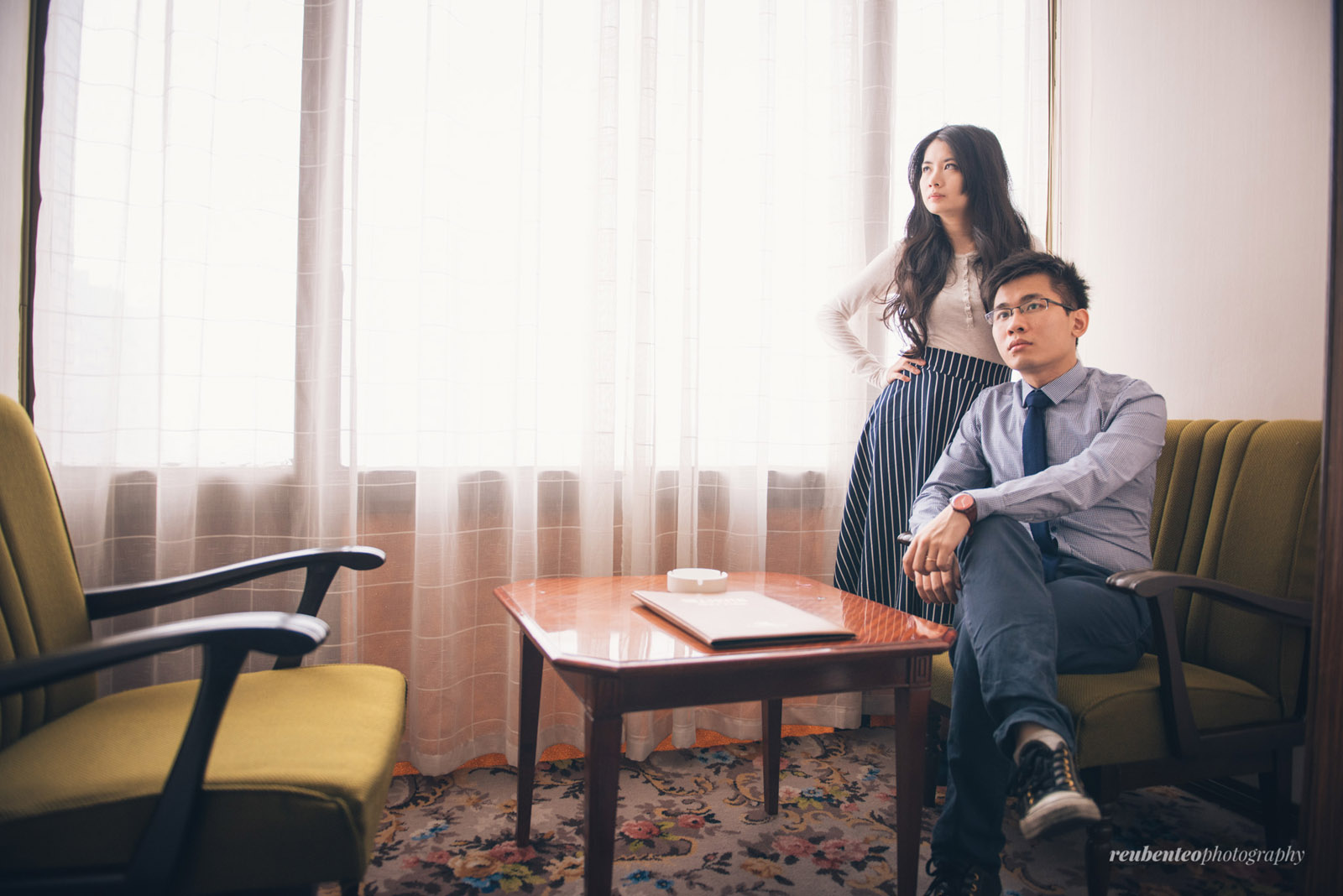 One cannot resist when one is dressed up extremely nice in a hotel room that looks like the 60s. Photoshoot time! 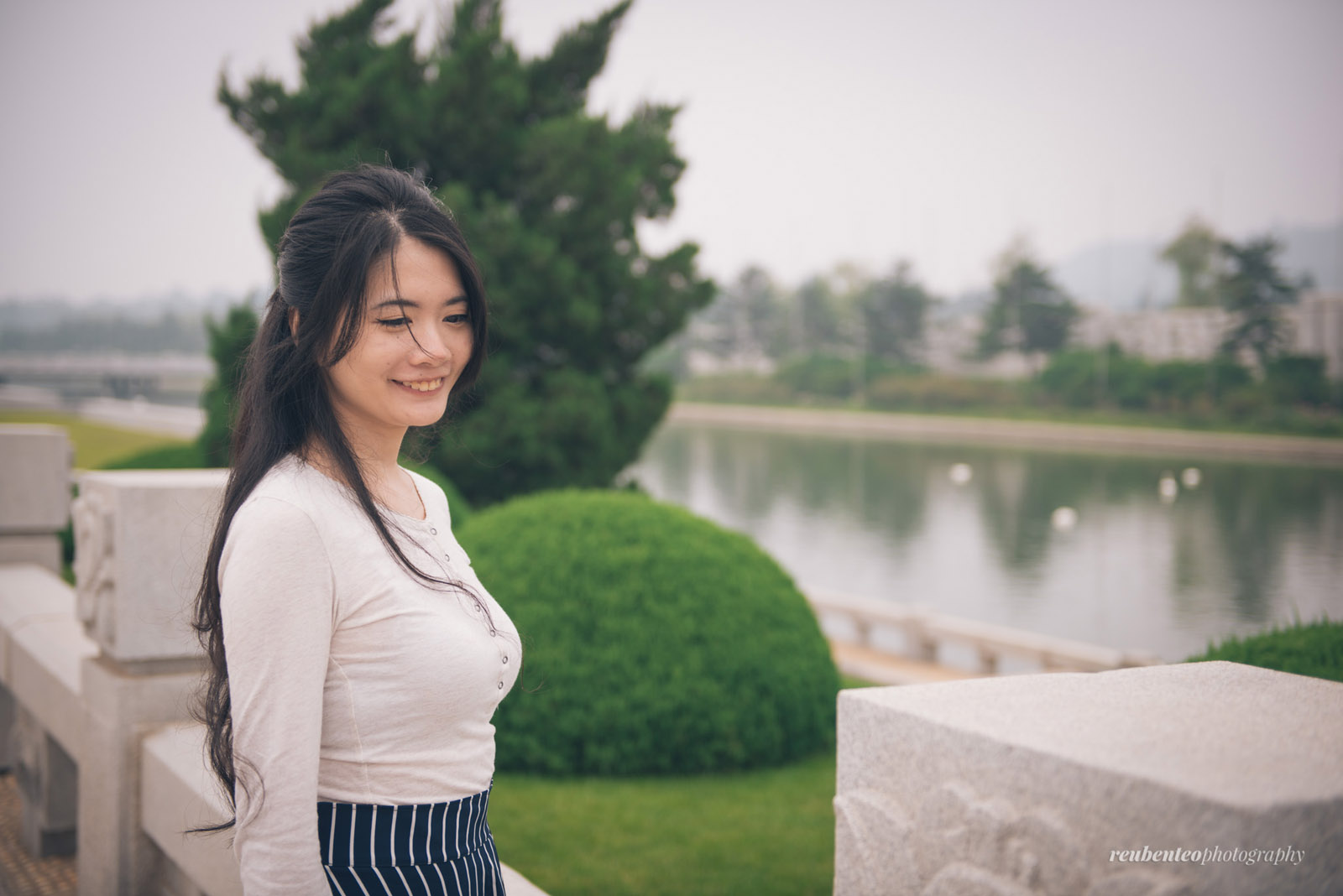 Fann enjoying her day at the Kumsusan Palace of the Sun 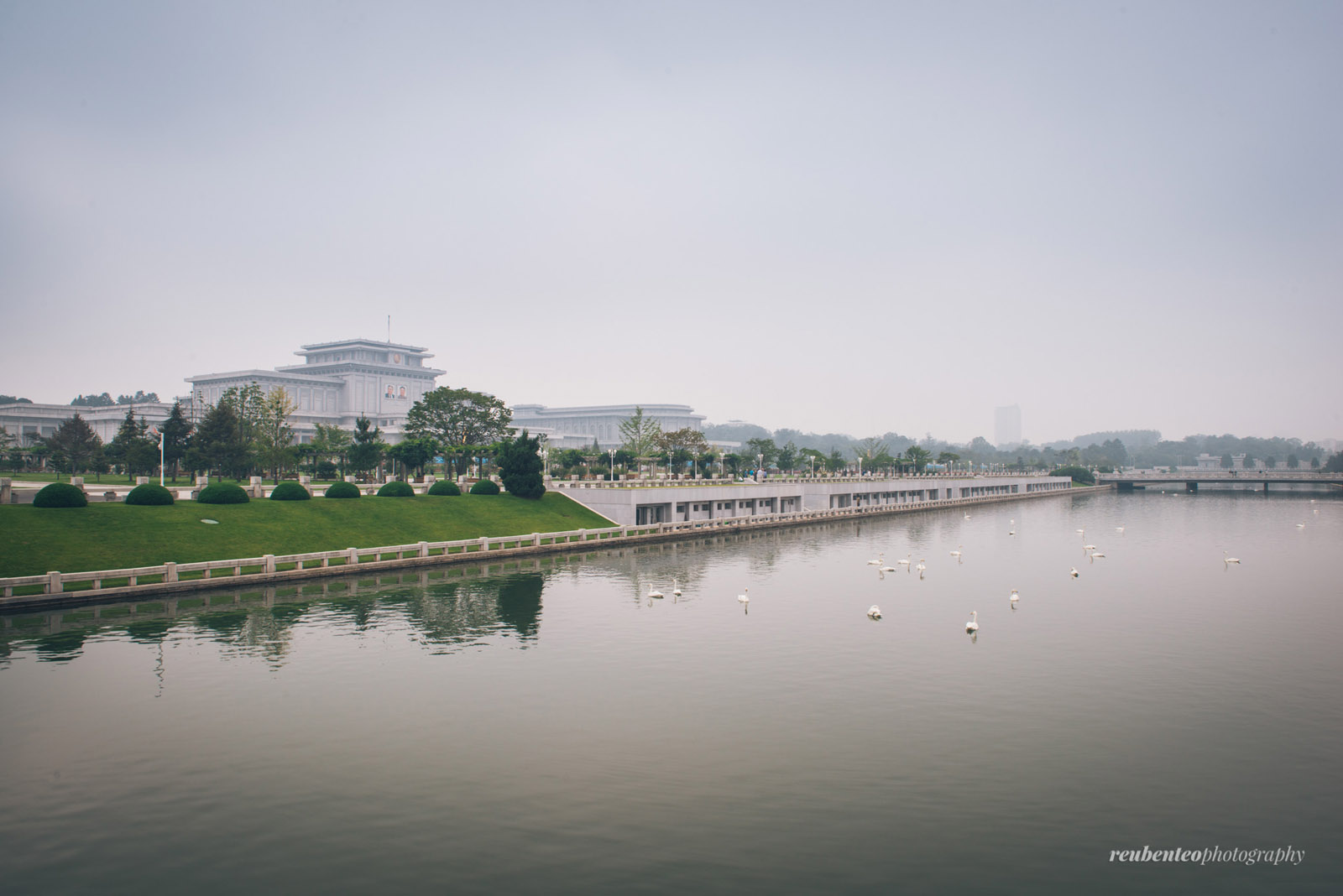 The Kumsusan Palace of the Sun, also known as the Kim Il-sung Mausoleum 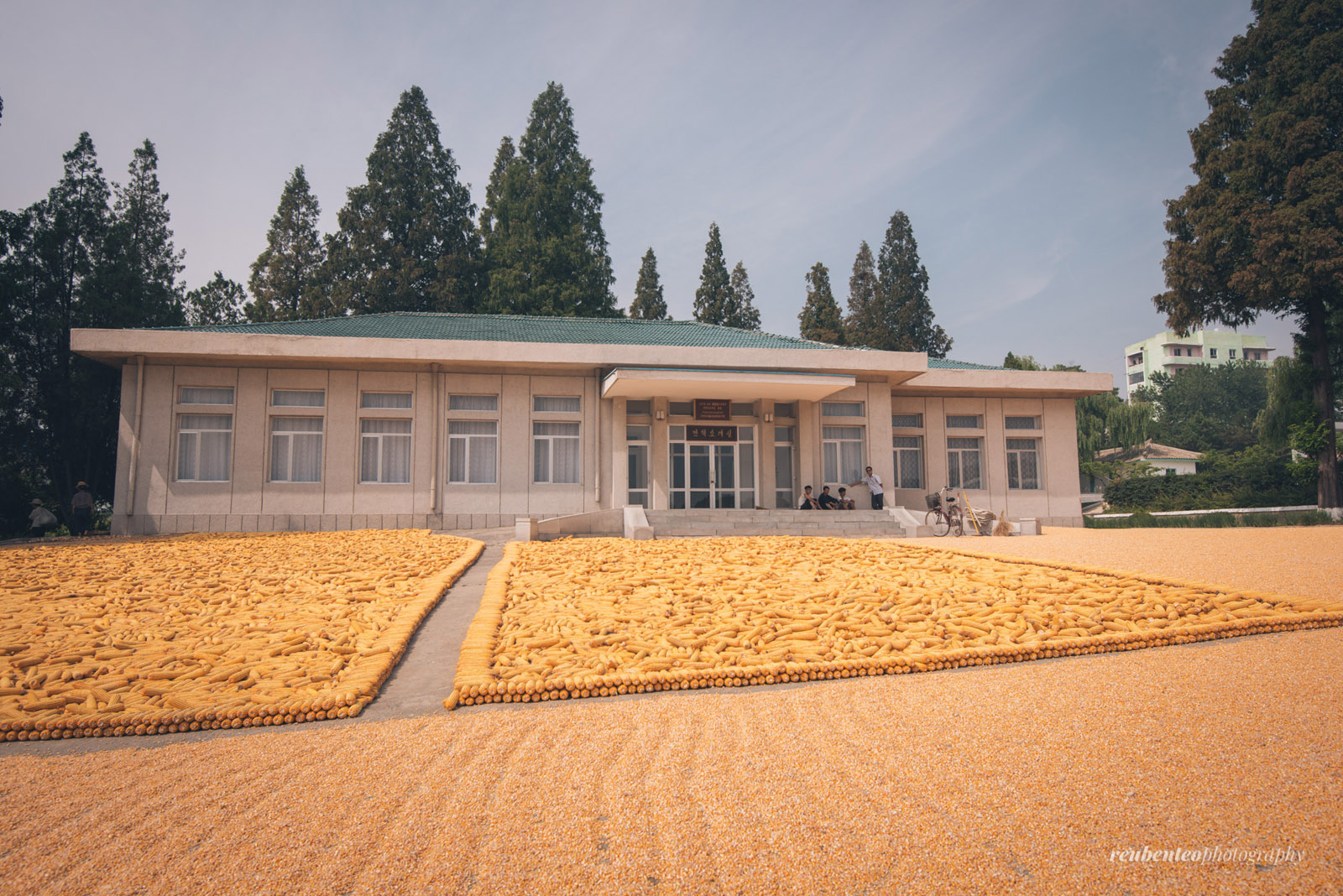 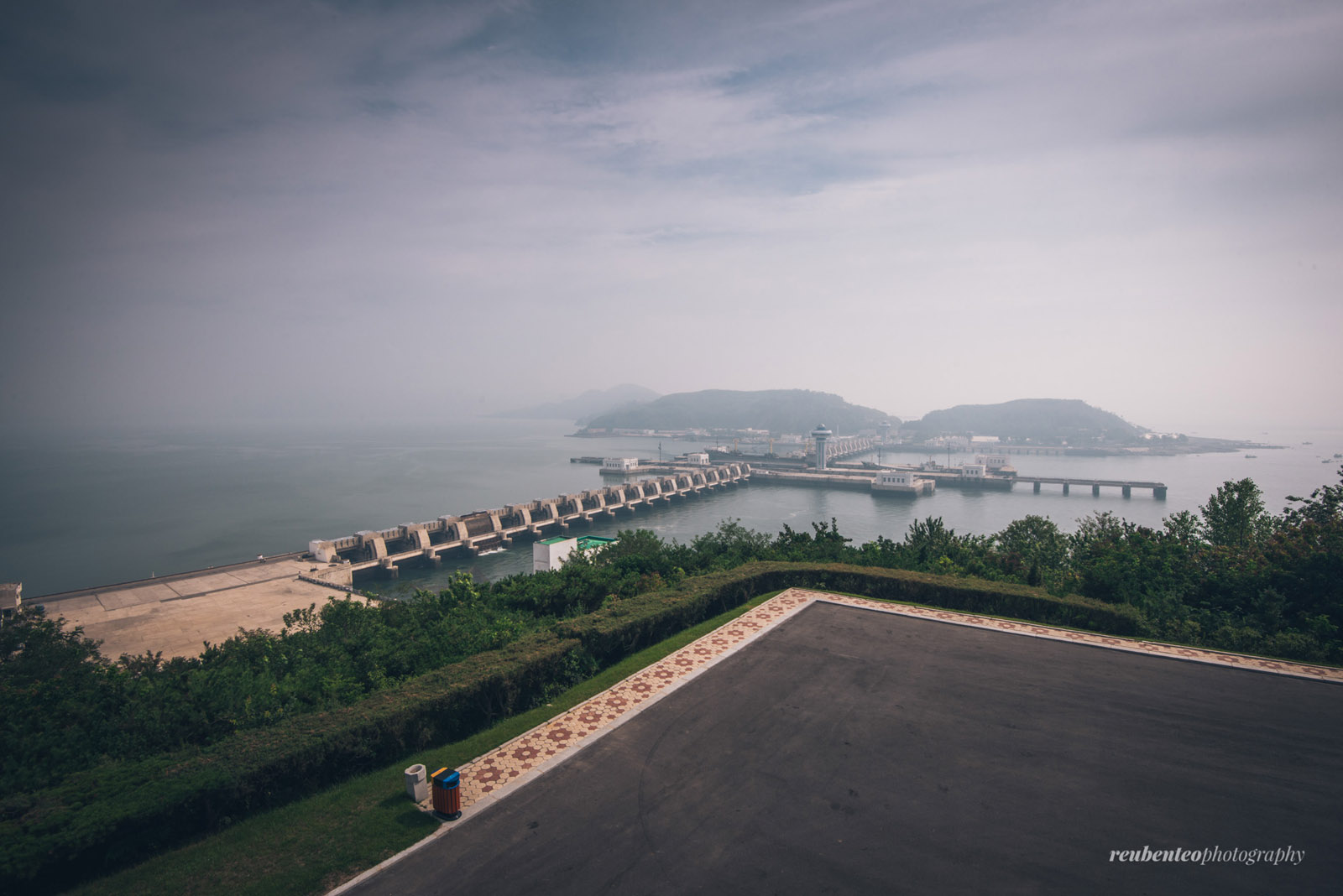 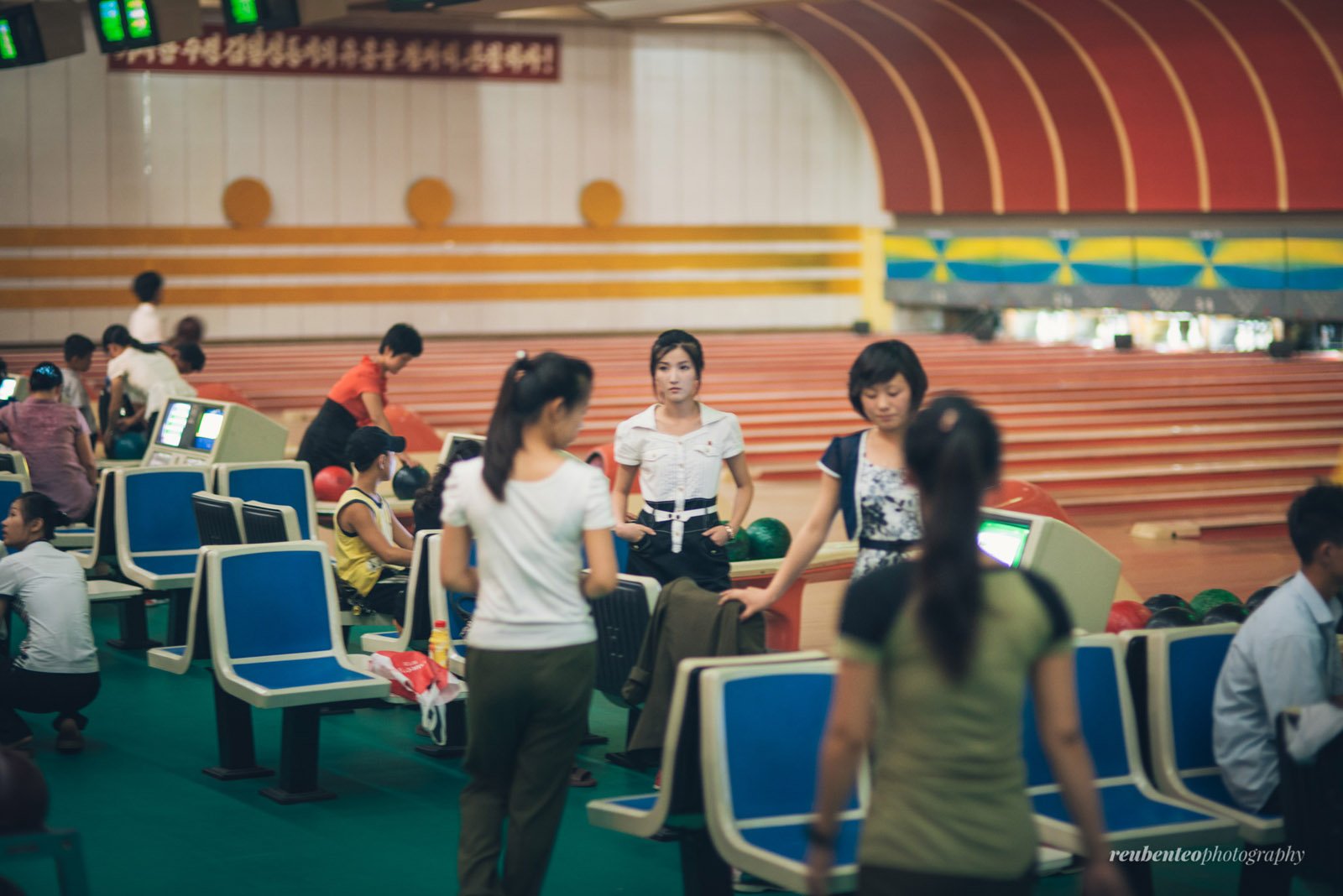 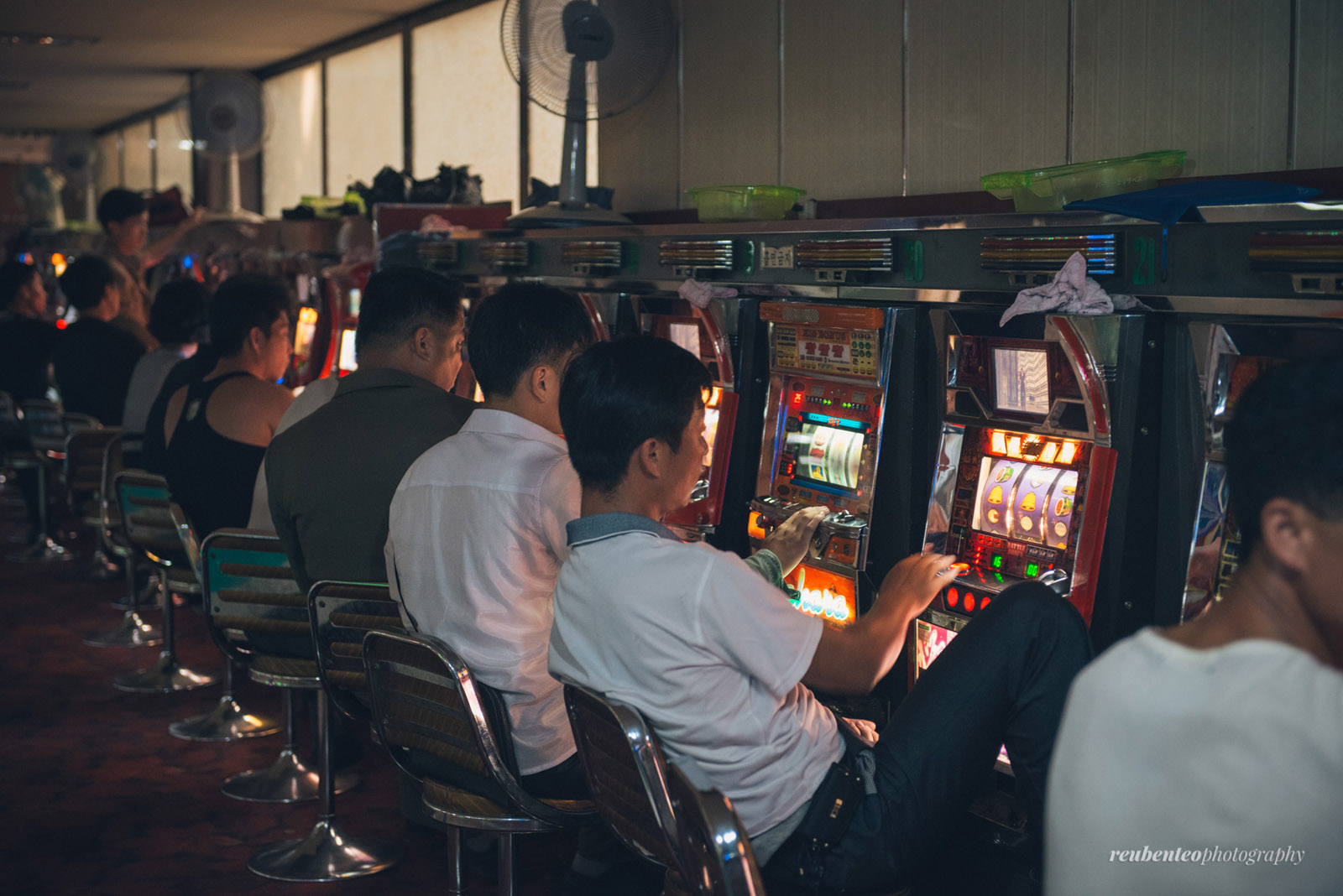 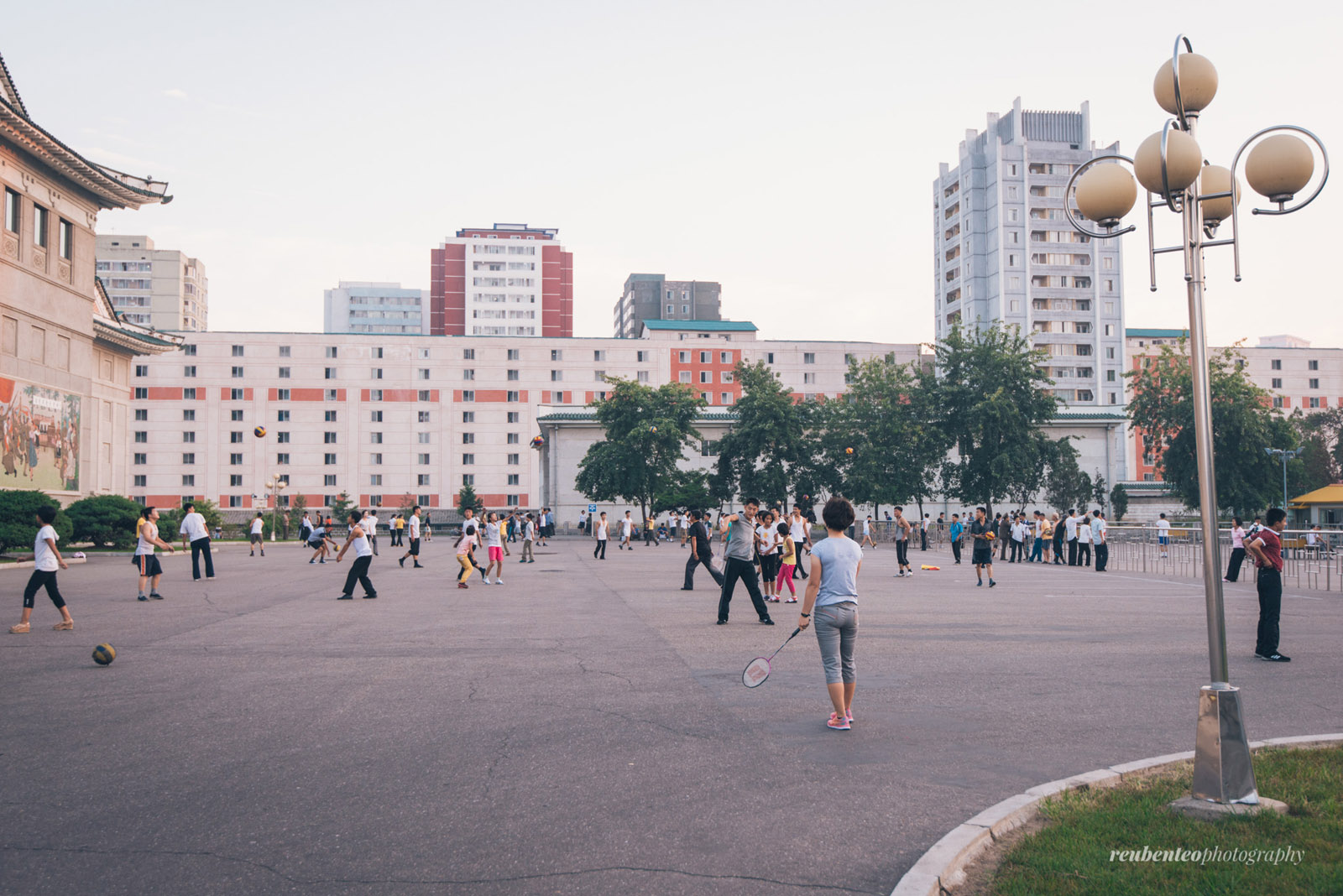 Sunday is family time too in North Korea. Parents and children playing beside an open area beside the Pyongyang Grand Theatre 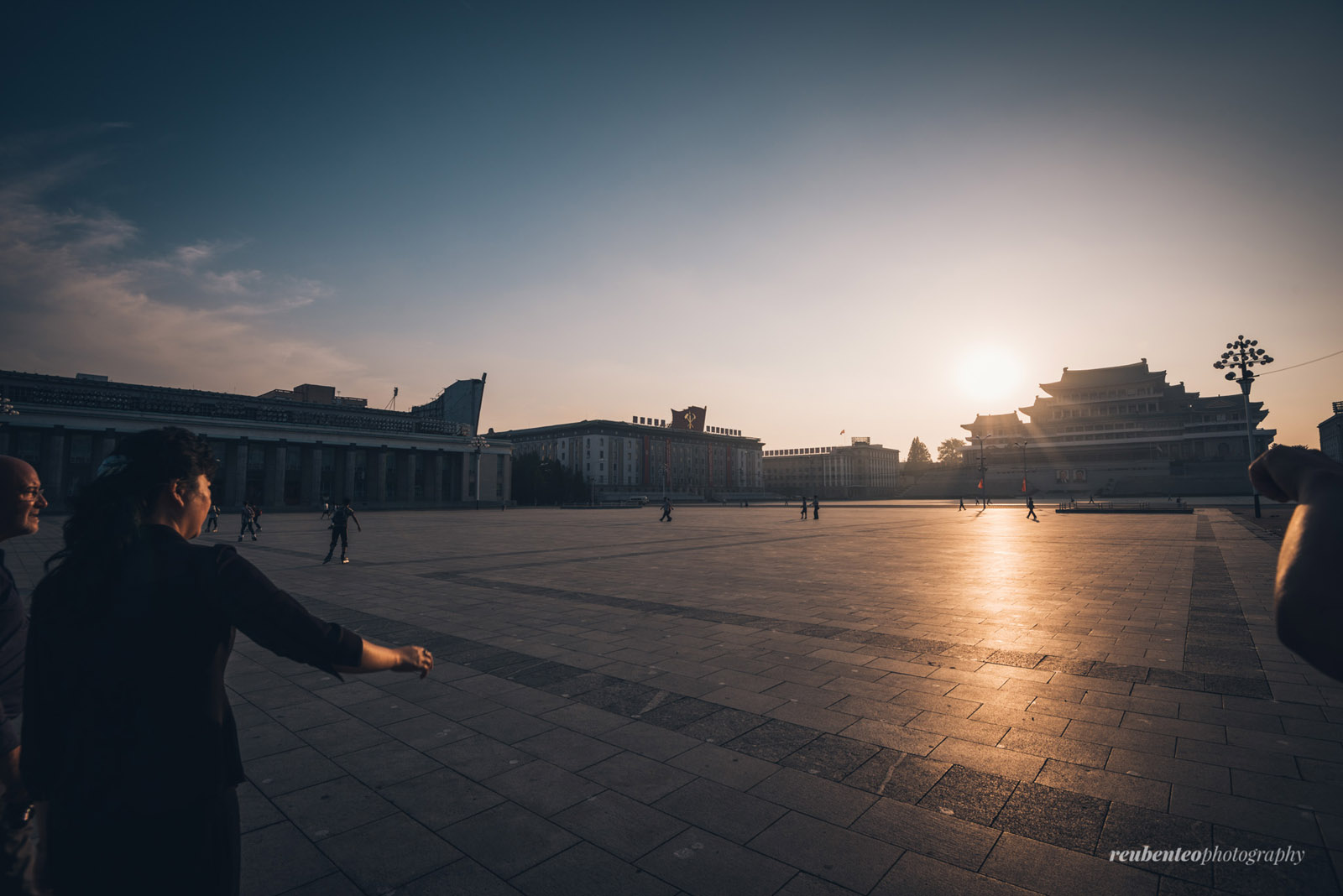 Awesome sunlight at the Kim Il Sung Square. This is where the military parade is held 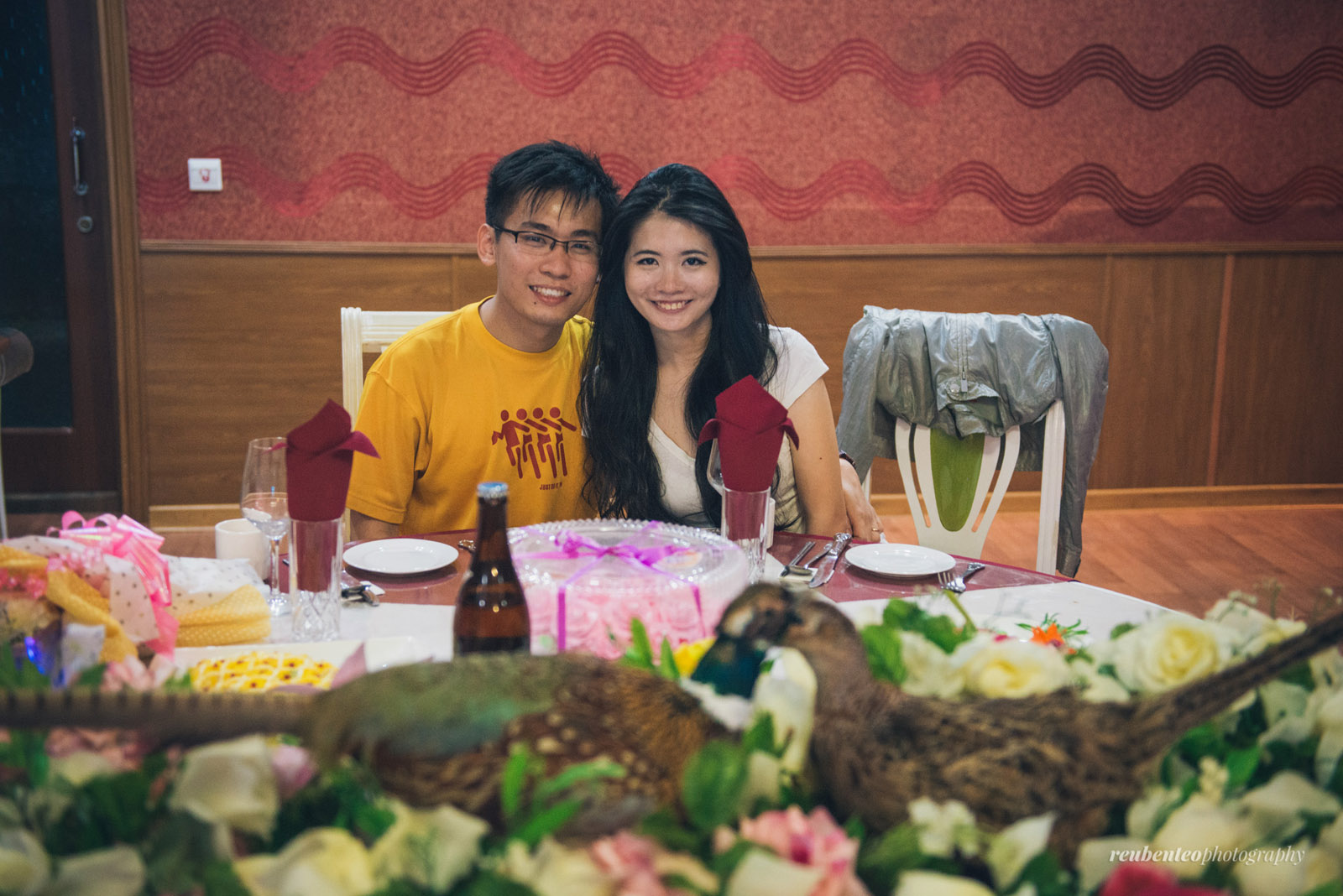 Our table setting and the cake 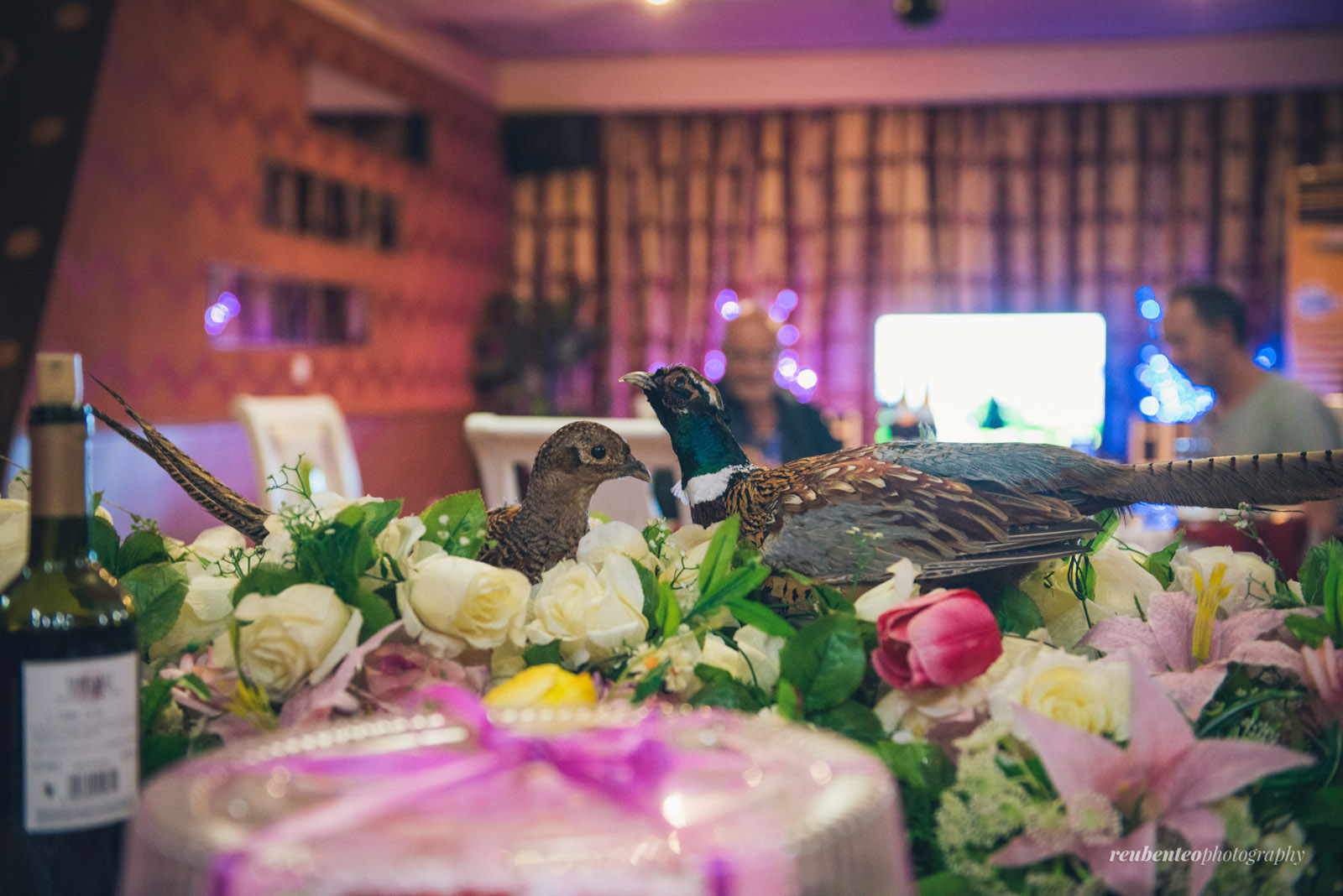 A pair of lovely peacocks accompanying us during our anniversary night 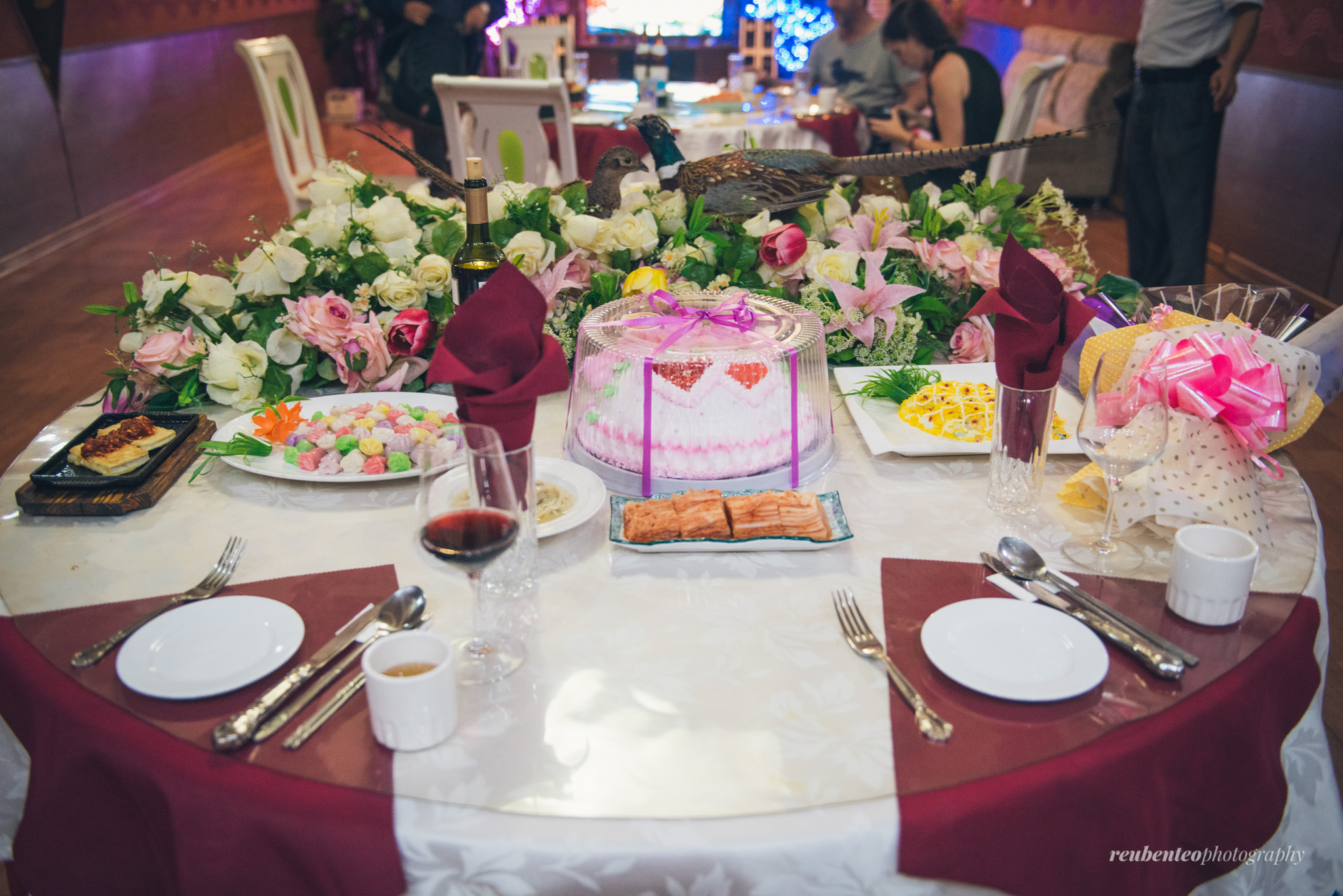 Our table setup with first part of the food 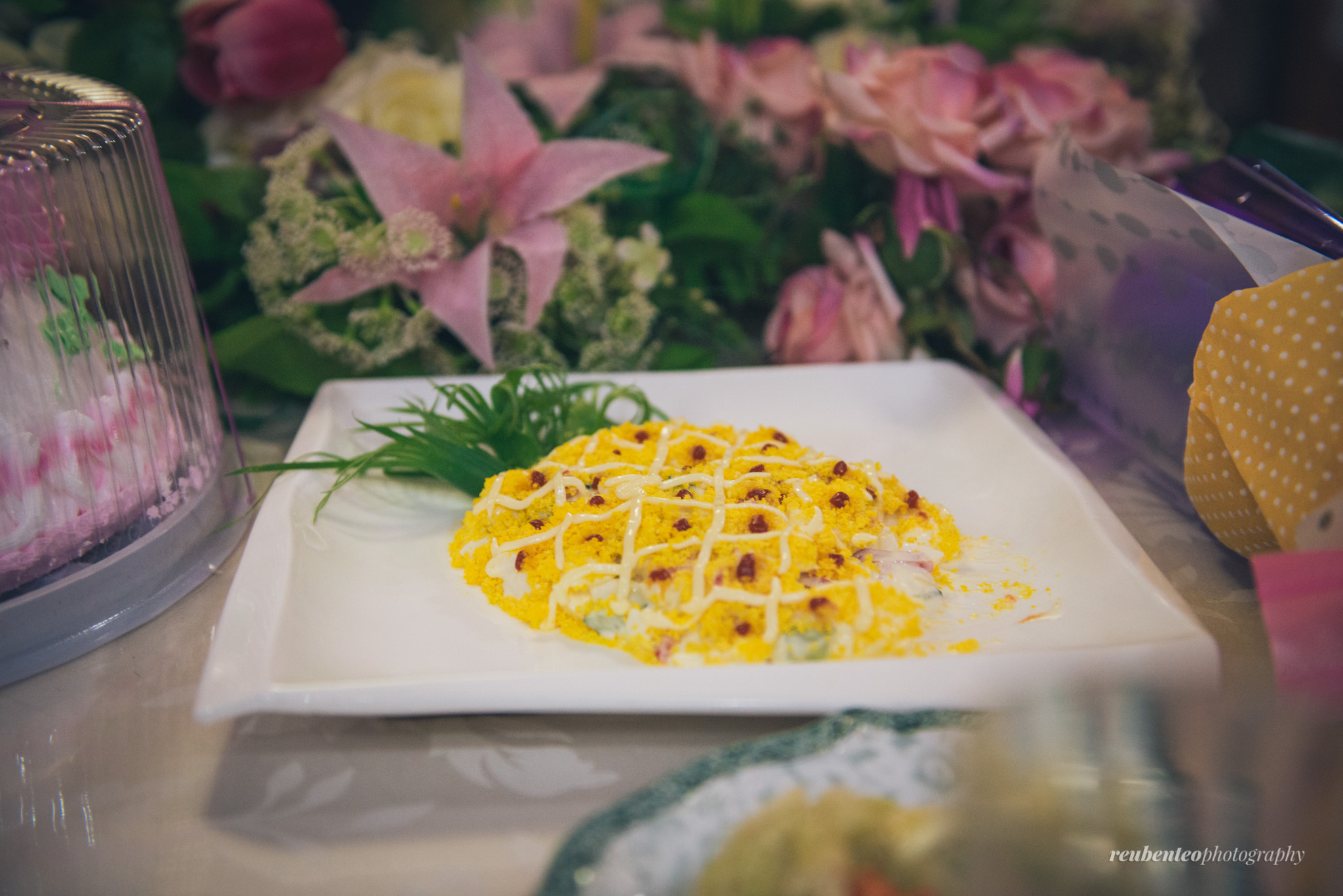 Awesome egg salad decorated in the shape of a pineapple 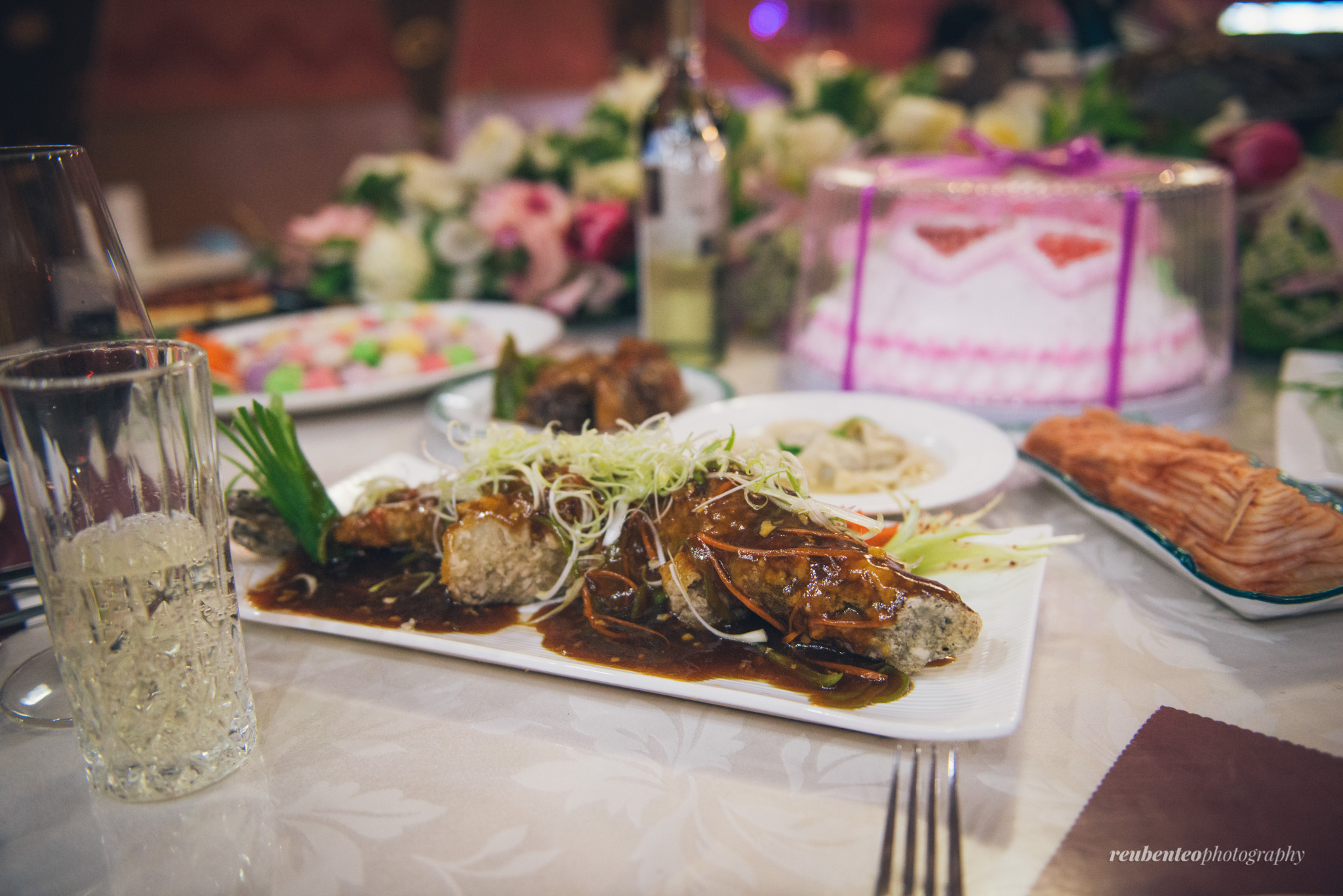 This huge fish for the both of us? It’s big! 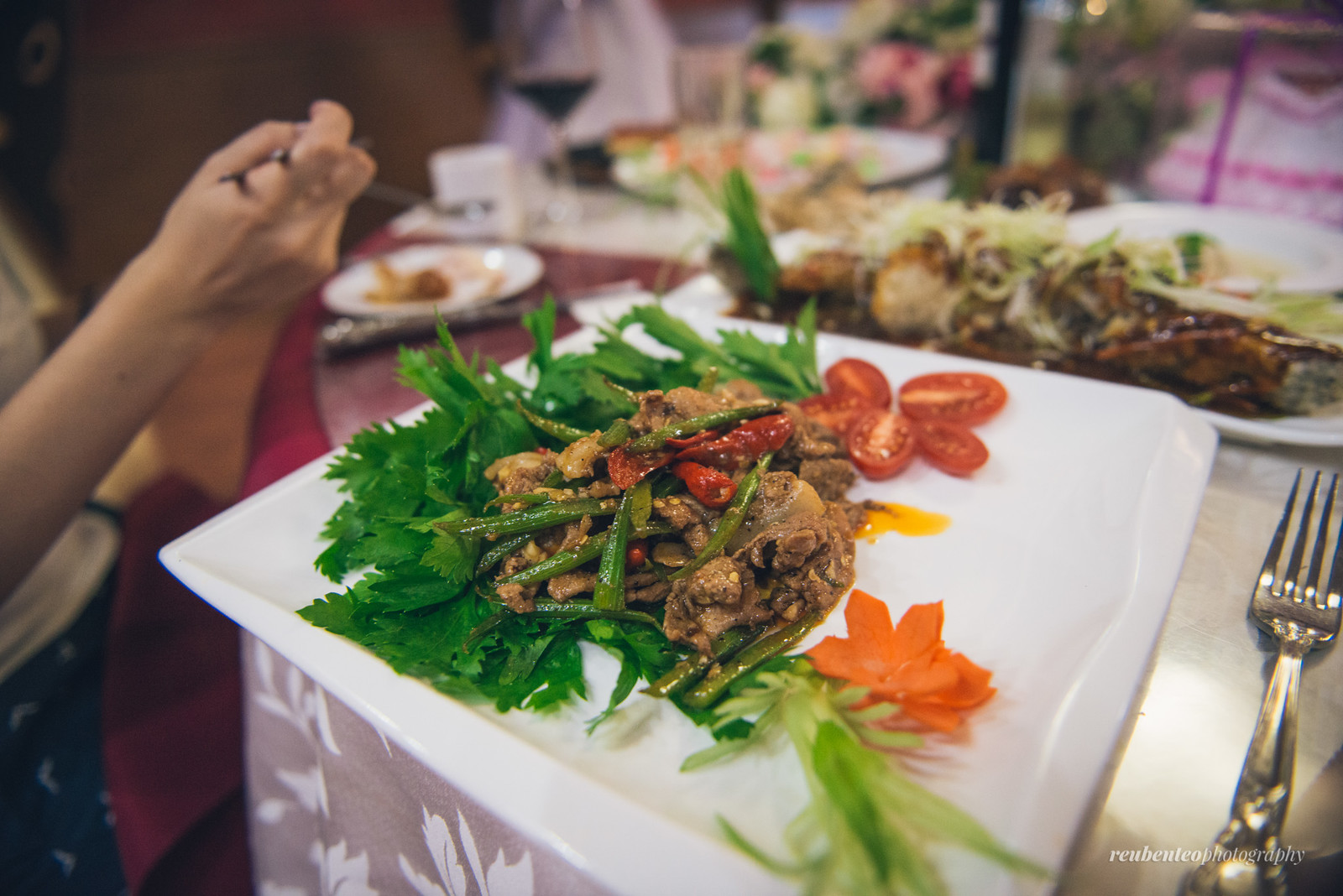 Then comes another plate of duck meat? OMG! 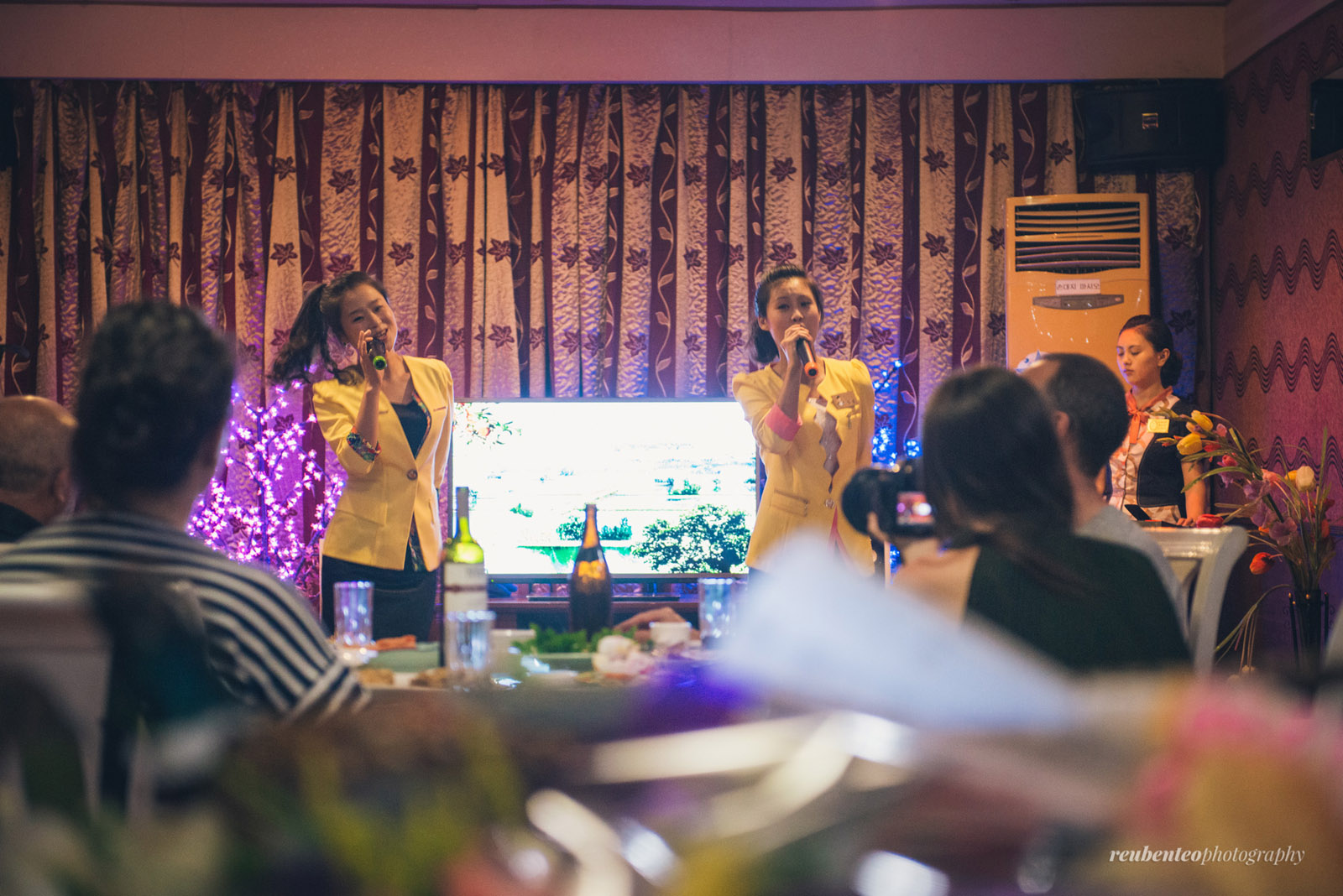 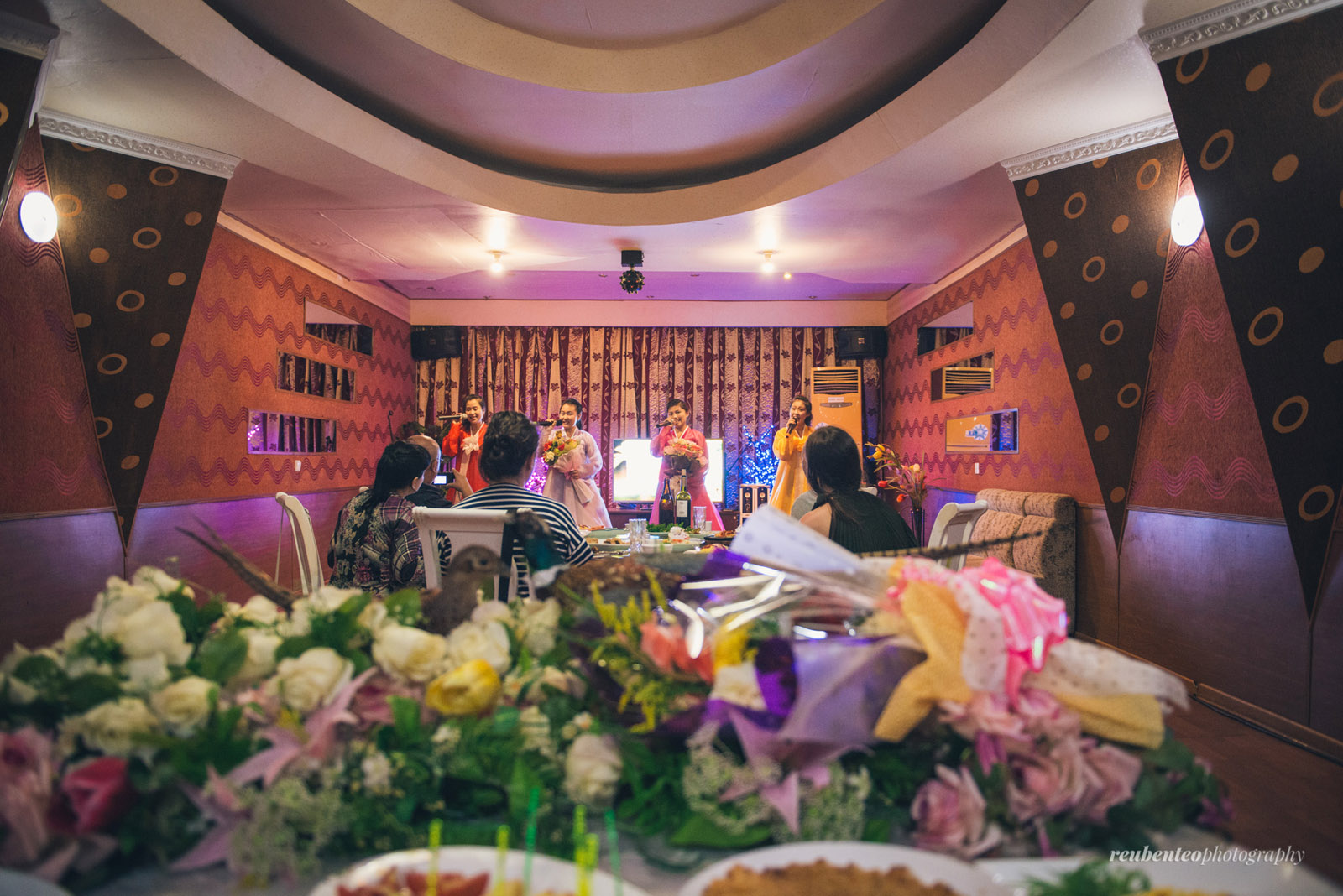 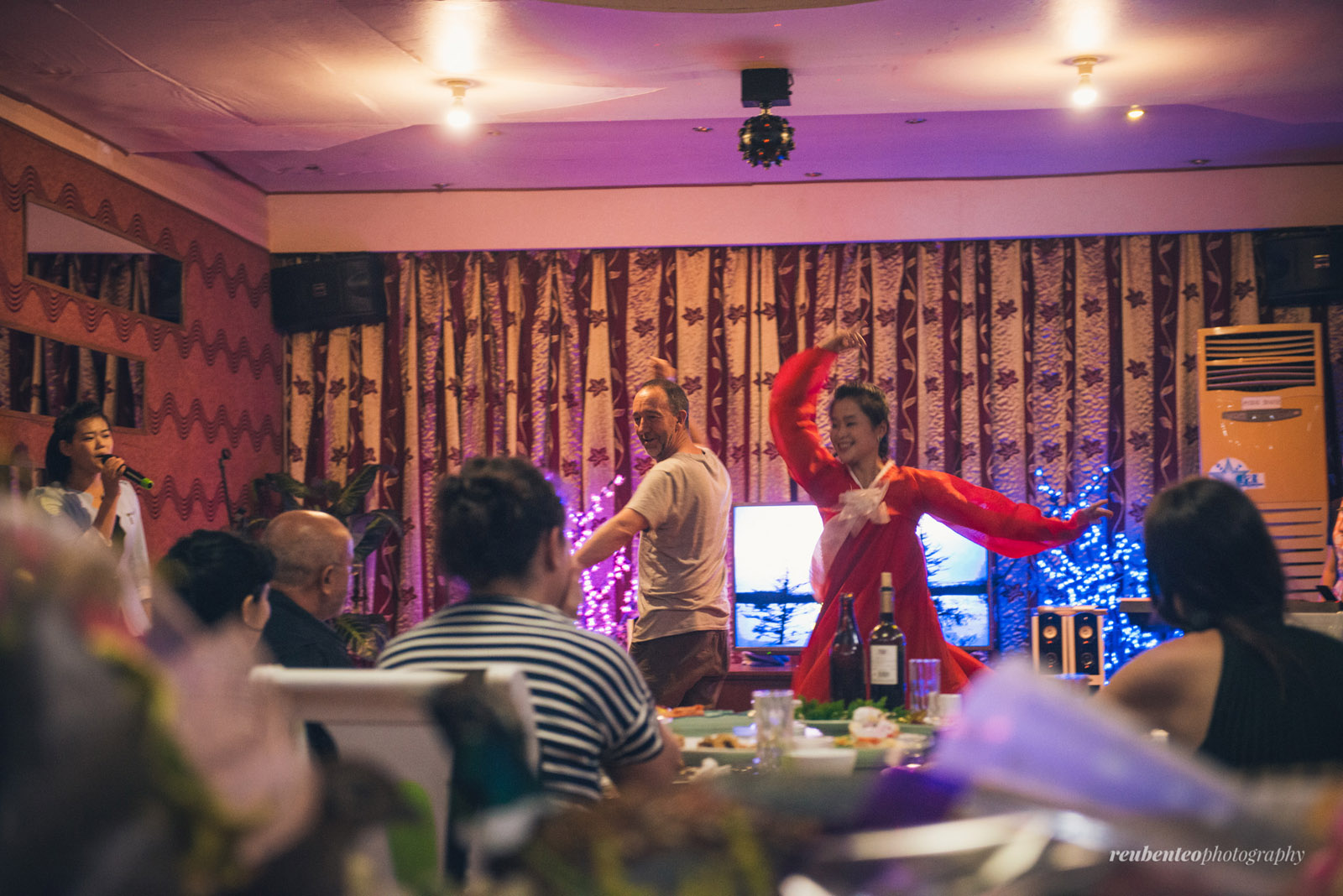 Peter and his awesome dance moves 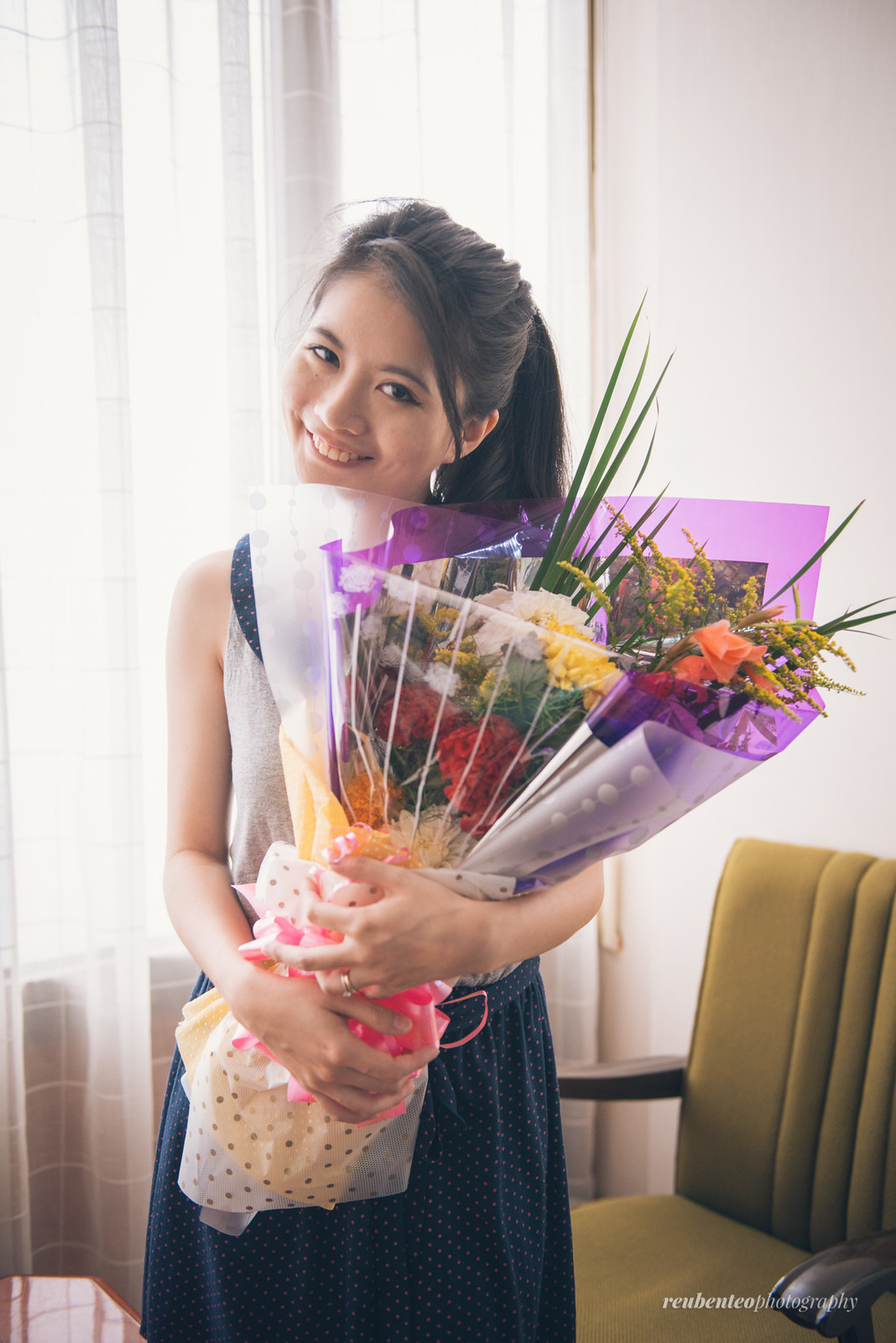 Fann and the bouquet she received at the restaurant

The night ended when there was a power shortage but even so, we enjoyed ourselves and was extremely full from the largest portion of food we’ve ever seen in our lives. We brought the gorgeous bouquet and the leftover cake back to our hotel. We were so happy and it was a night that the both of us would never ever forget. We are extremely grateful to our travel agent David from Juche Travel Services, the restaurant staff who served us, the performers who danced and sang for us, and especially our tour guides at KITC, Mr. Jong and Mrs. Chen who made this anniversary a night to remember. Thanks for the surprise! Below are some of the video clips  of what happened during the night. Enjoy.

Our wedding actual day highlight, in case you have not watched it yet!