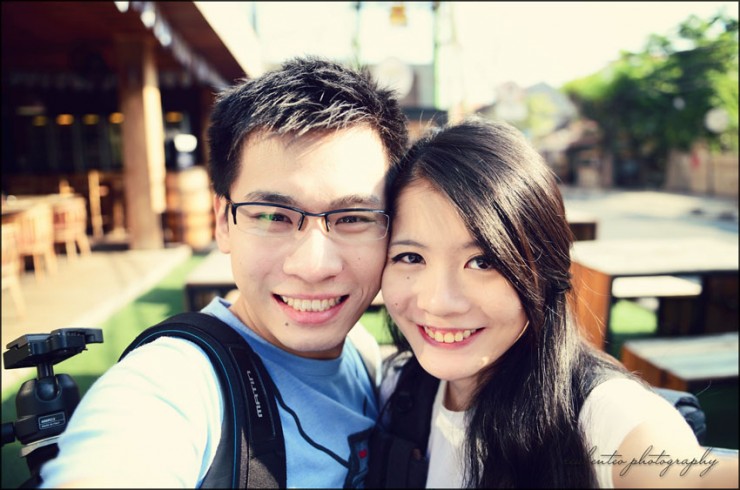 We didn’t do much on the first day in Bali because we reached the airport at night. Our exciting tour begins on the second day. Before we get started, we need to know that Bali has no subway system, lack of buses which means it would be hard to travel around without a vehicle of your own. Most of them move about by motorcycles or their private cars. So, what we did was to hire a local guide.

As most of you know, I tend to be a rather worried wreck if my vacation plans are not organised properly. So, I took the liberty to find our guide through the good old internet. Some of my friends gave me a few numbers to try and I too contacted a few through email. I wanted my tour to be customizable and it had to cater for my appetite of photography. One of the tour guides that gave me the quickest respond was this guy called Dodi. I found him through Facebook by Googling. I could sense that he was very friendly through his email respond. I explained to him that I required his service for 2 days, my purpose of going (which was photography) and the few places that I wanted to visit. The charges were 500,000 rupiah per day (12 hours including petrol but excluding all the meals and entrance fees). I thought that it was a pretty good deal, and he sounded very trustworthy, so we hired him. He told us to wait for him at our hotel at 8:30am and that was all. With no deposit and no itinerary, I was pretty nervous and worried. 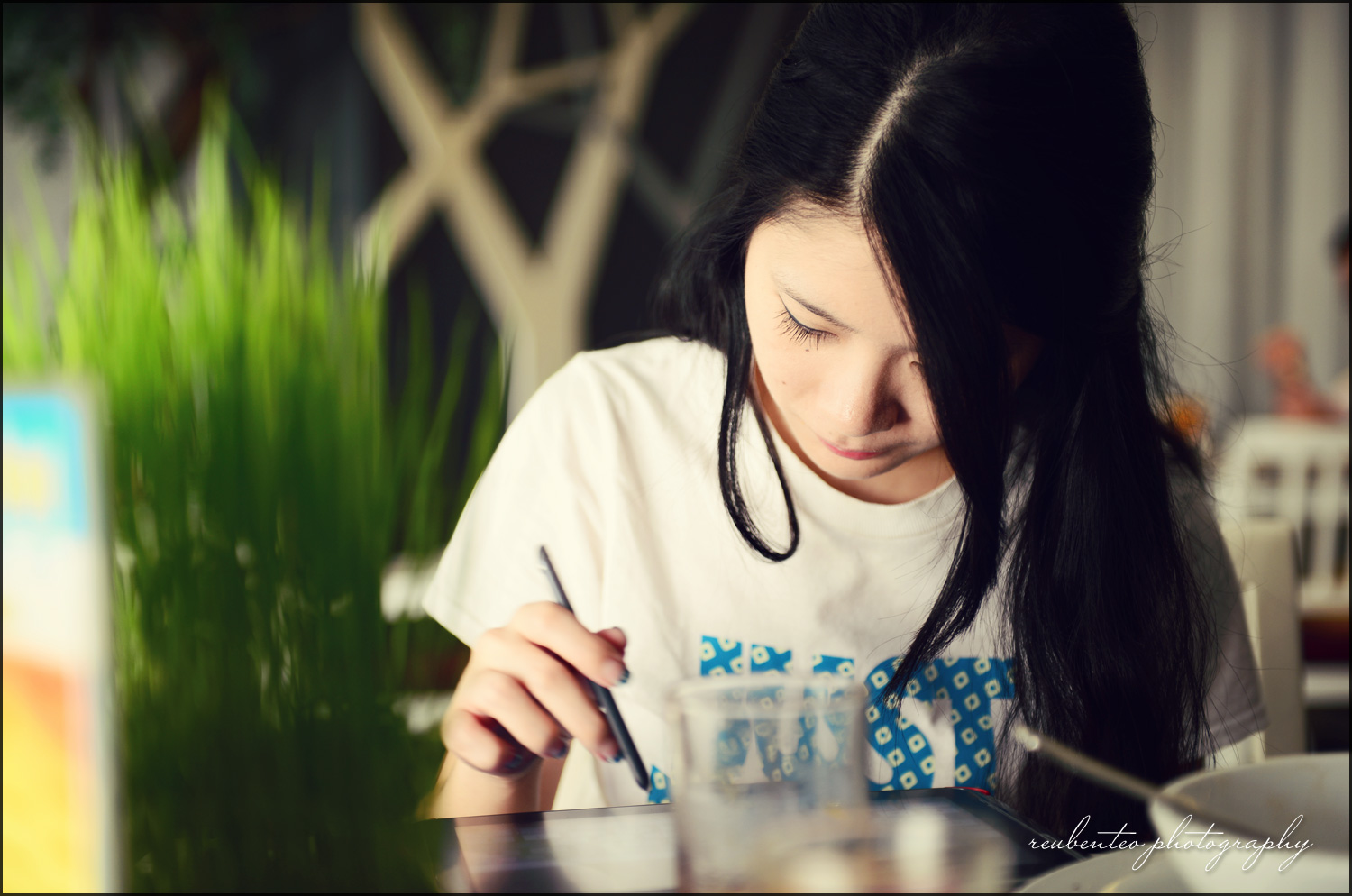 The 2nd day in Bali, we woke up early to catch our breakfast at the hotel. Fann & I waited at the lobby for Dodi. 8:30am struck and there was no one, I began to worry. Fann said let’s wait for another 10 minutes, still there was no one. As I was about to take out my phone to call, a gentleman walked up to me and asked if I was Reuben. I stared at him and said yes. He didn’t resemble the picture I saw on Facebook, but he told me that he will be my guide for the day. As we got into our small van, he explained that he was Dodi’s cousin, Boby. He was very friendly too.

Boby told us that we will be visiting Ubud, Tegalalang, Kintamani & Besakih Temple for the day. It sounded like a pretty packed schedule for 12 hours, but I trusted him. He’s the professional here. The roads in Bali were mostly narrow and had only 2 lanes. One side to and one side fro. In comparison to the ulu ulu roads back in Kuching, theirs were even smaller. They have got to have some kind of extreme driving tests to be driving around those narrow roads. I was pretty impressed by their driving skills to be exact. 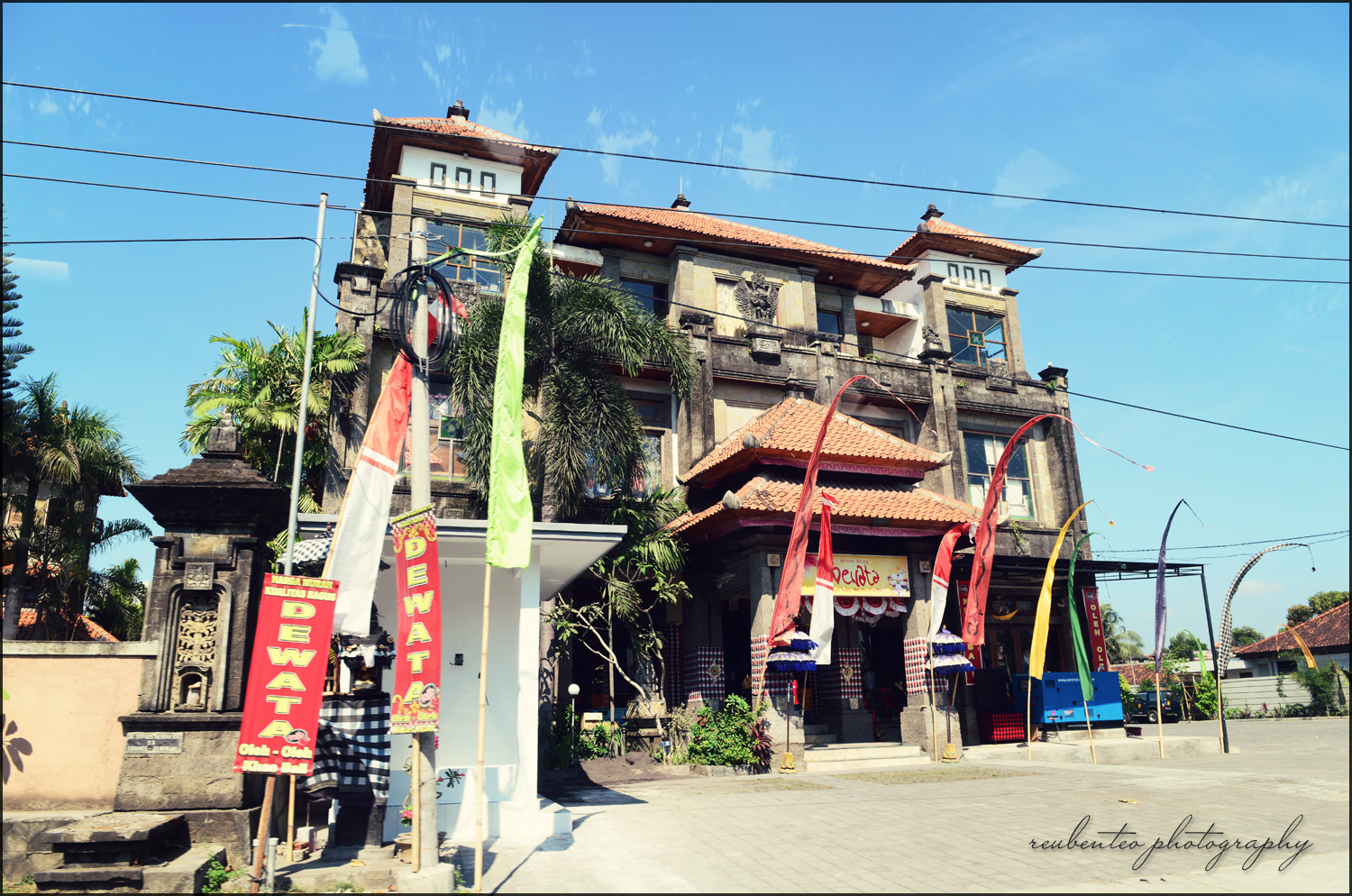 On the roads, we could see beautiful architectures all around Bali. Most of the houses are designed traditionally and they have those extraordinary roofs. One glance and you know it’s a Balinese house. The number of temples we saw around Bali were like 7 Elevens around every corner. Boby told us that in every town of Bali, there will be 3 temples. The 3 temples are for the Hindu Gods – Brahma, Shiva, and Vishnu. The homes in Bali are traditionally built inside a compound and there too lies a family temple. The temples here are usually deserted unless there is a huge festival or some other religious event. This is because most Balinese will be worshipping in their private family temple. 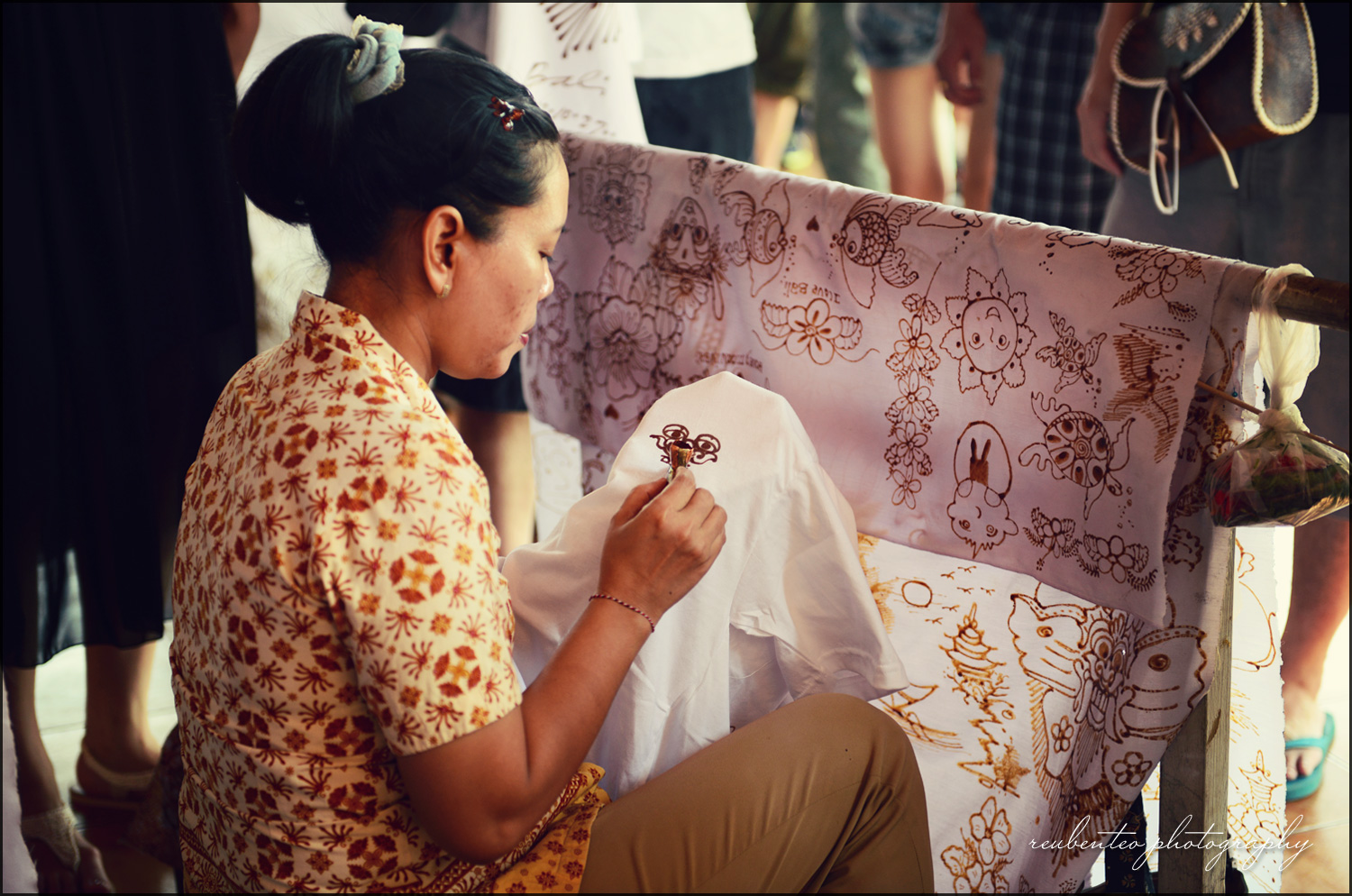 Our first stop before reaching Ubud was a huge batik shop. We weren’t that amazed with the batik, because Malaysia too has batik. Since we were there, Fann & I strolled around the shop. Buses filled with Taiwanese and Chinese tourists were storming the area where the Batik artists are drawing and dying the batik cloth. Tourists could also buy a piece of white shirt and have the artists draw the first layer of outline wax with any customized graphics of your choice. The process of making batik can be found here. 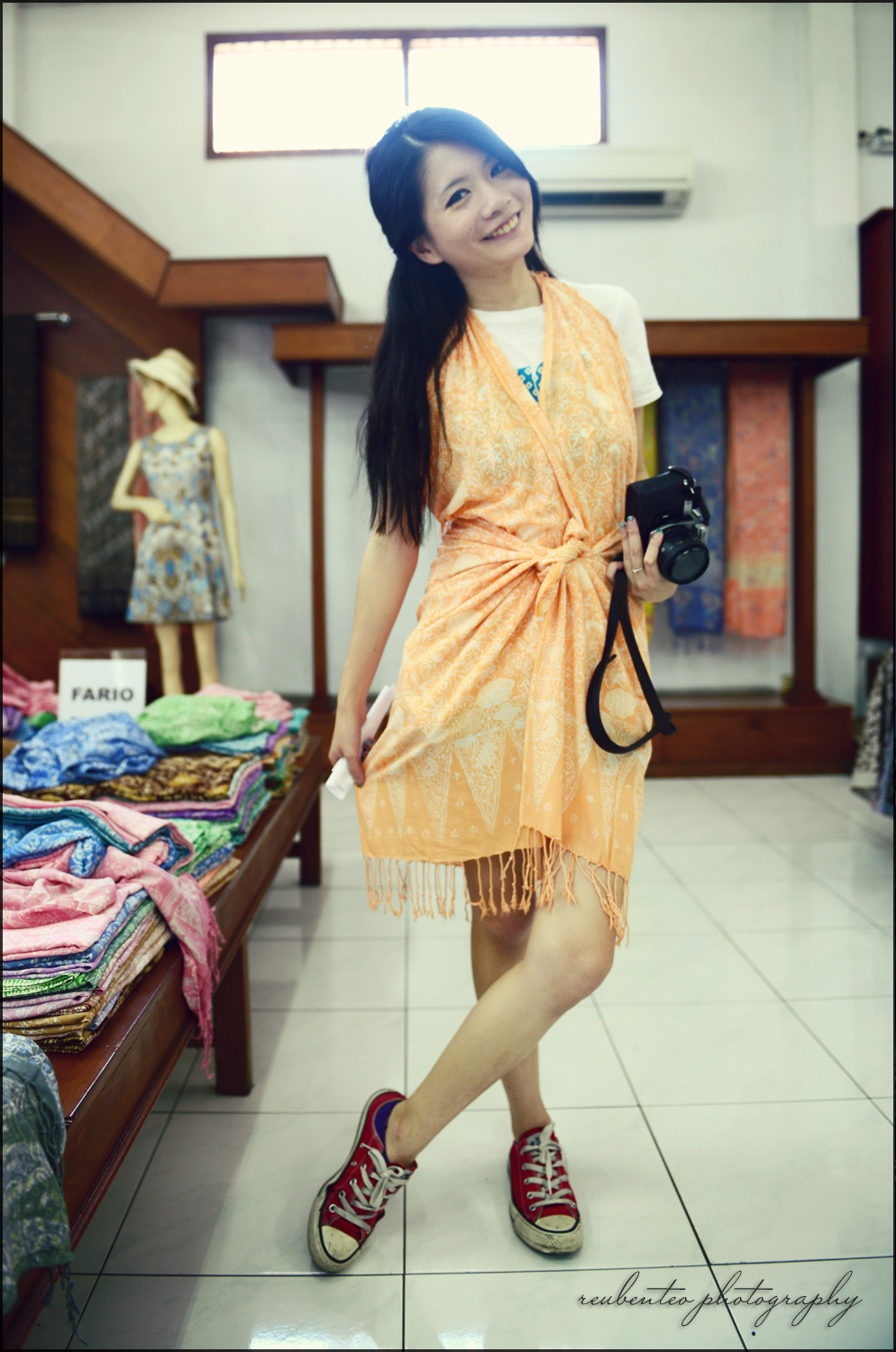 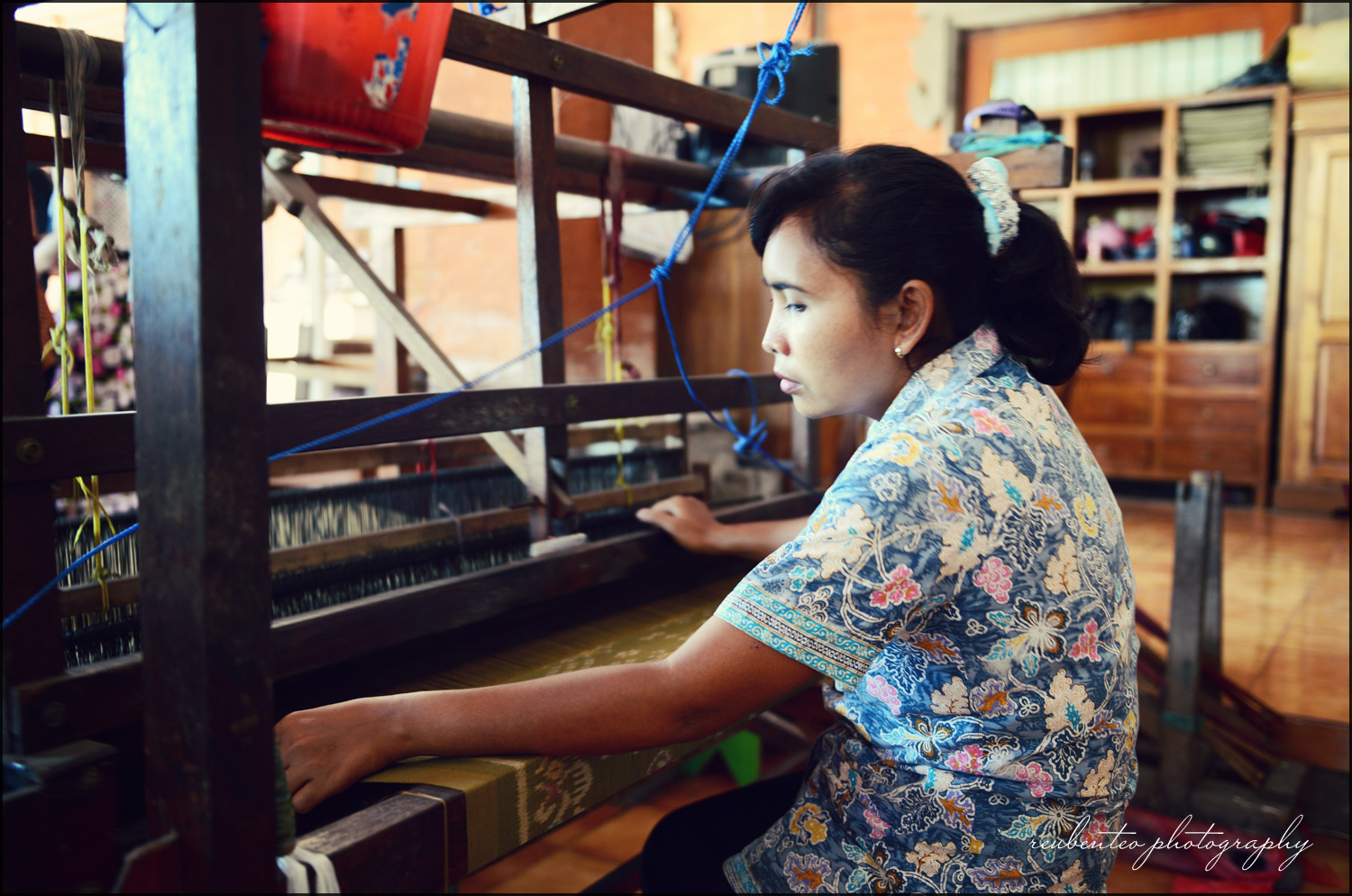 A woman using the loom. Reminds me of Sheldon when he lost his job.

It is quite an interesting place to visit if you have not seen the batik process. They also have a shop where you buy beautiful pieces of batik. There’s sarongs, table cloths, T-shirts and many more. We didn’t get anything from the shop but we thanked the batik guide for her lovely service of explaining to us and helping Fann to try on one of their batik. 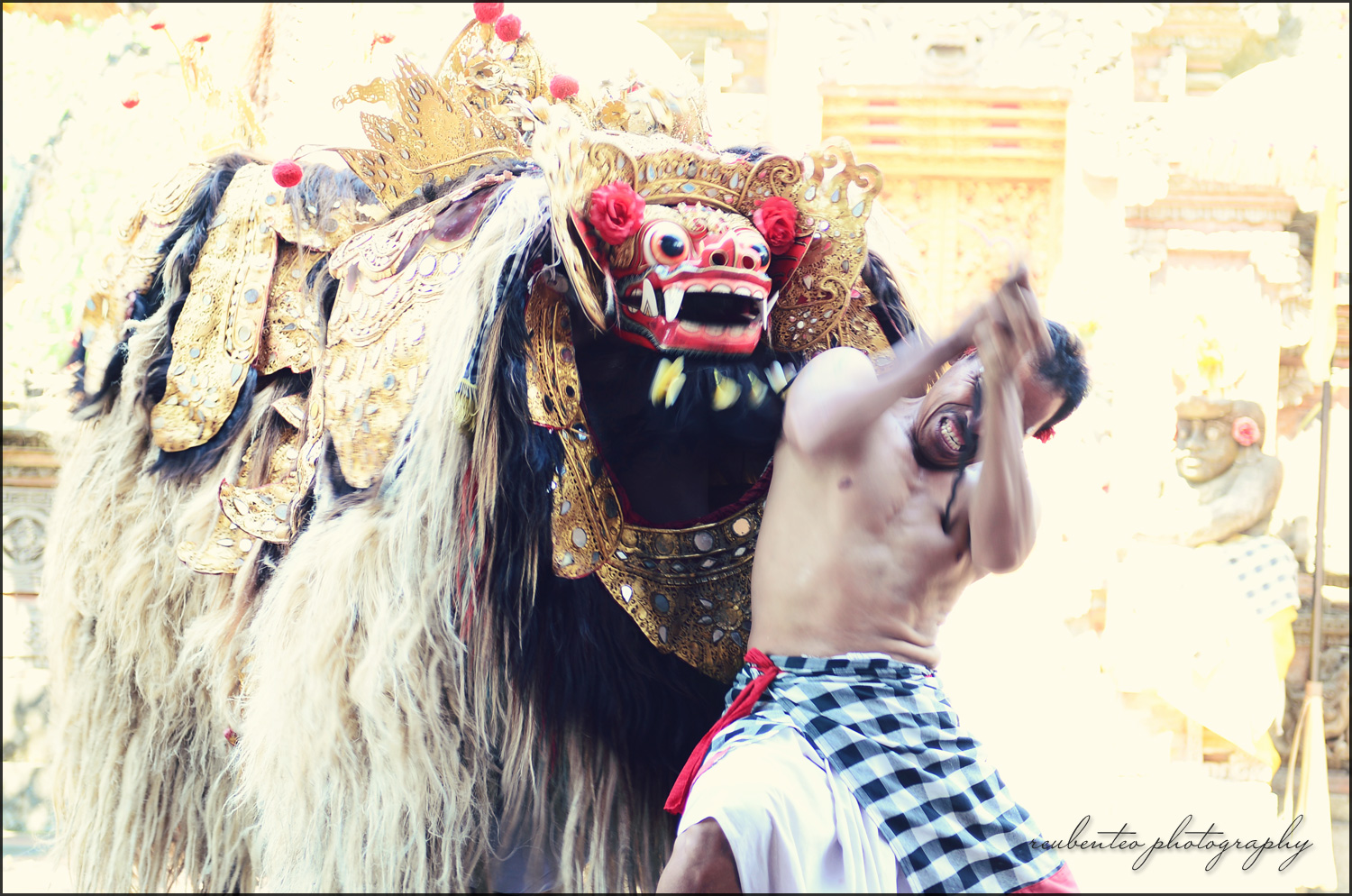 Barong and a kris-wielding dancer

Boby then took us to watch the Barong Dance in Ubud. Barong is a lion-like creature and character in the mythology of Bali, it represents the good and Rangda represents evil. This dance is about the battle between Barong and Rangda. This battle is featured in the dance to represent the eternal battle between good and evil. The Barong dance has traditional music as the background and the conversations are in Balinese language. We were quite clueless on what they are screaming about with little help from the piece of leaflet we got when we purchased our tickets, it had some English explanation of the dance. 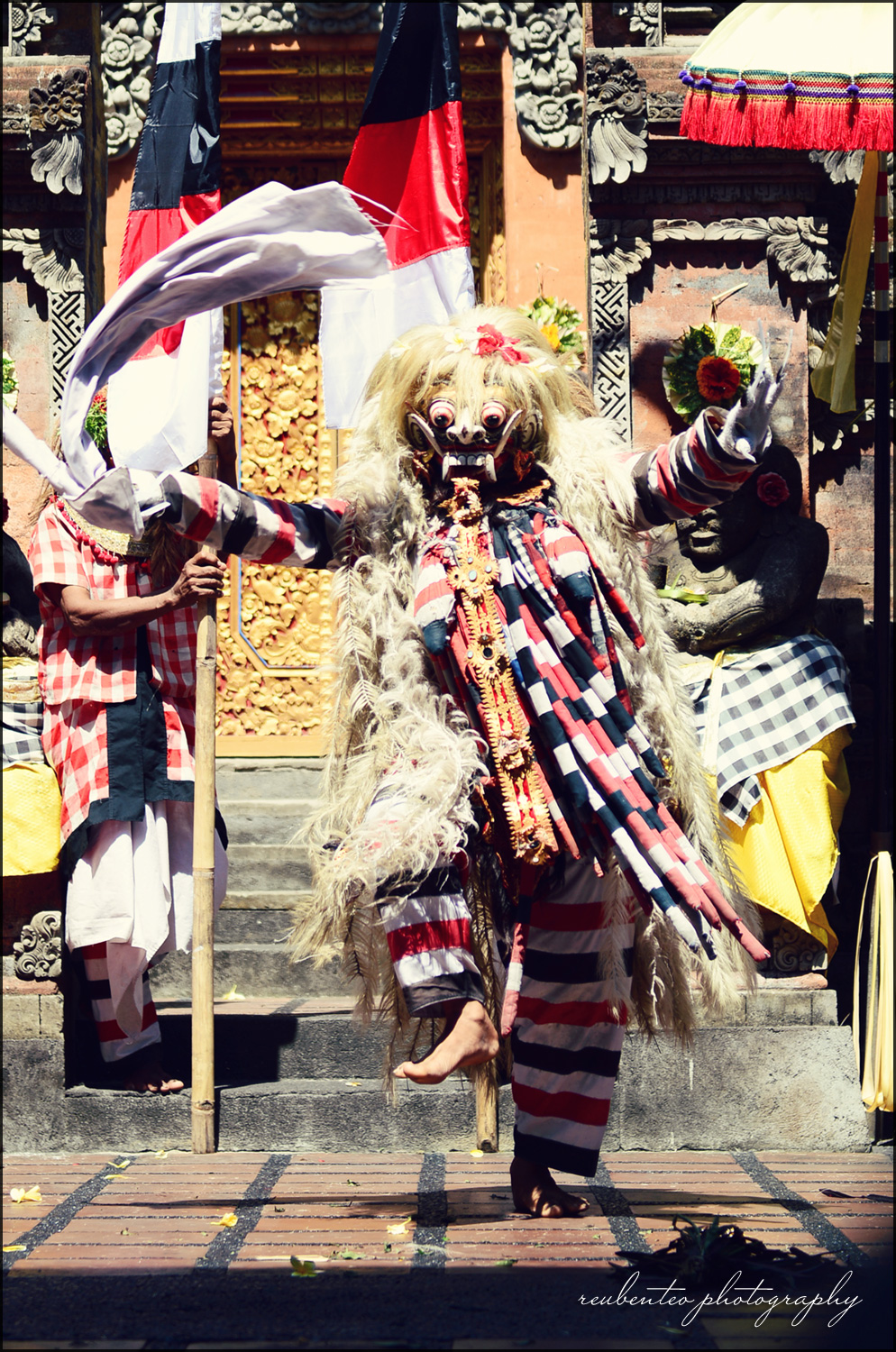 We tried our best to fit the chapter descriptions with what we saw during the dance. Despite the language barrier, I seemed to have enjoyed it. The dance was rather entertaining, as it too consisted some humourous parts as well. I was fascinated by the design of the Barong. The details they have put into the costumes were in fact beautifully crafted. Fann was pretty bored with it because it’s her 2nd time watching it but she seemed pretty interested with the gate on the stage. The price for the dance was 100,000 rupiah per person. 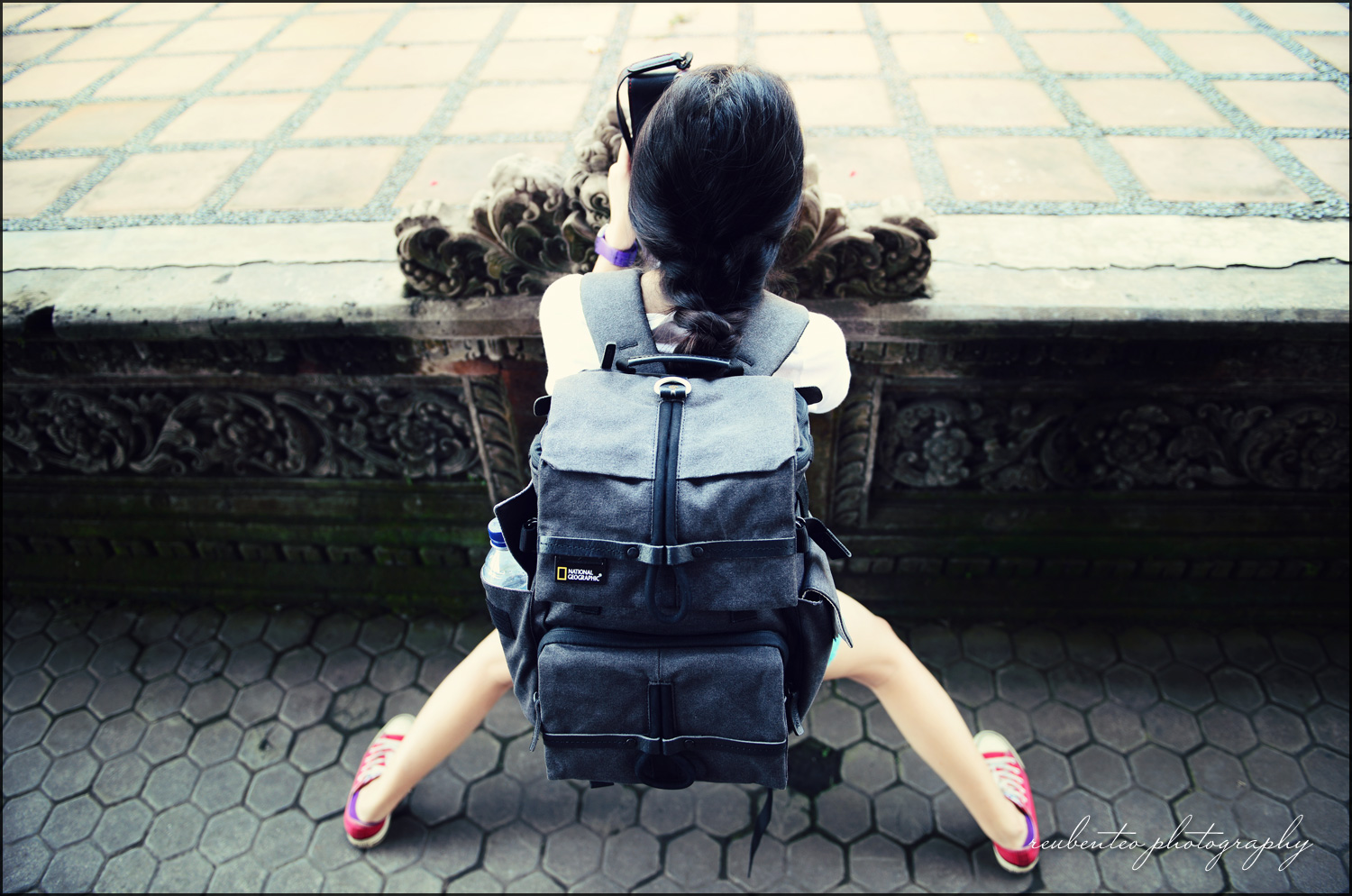 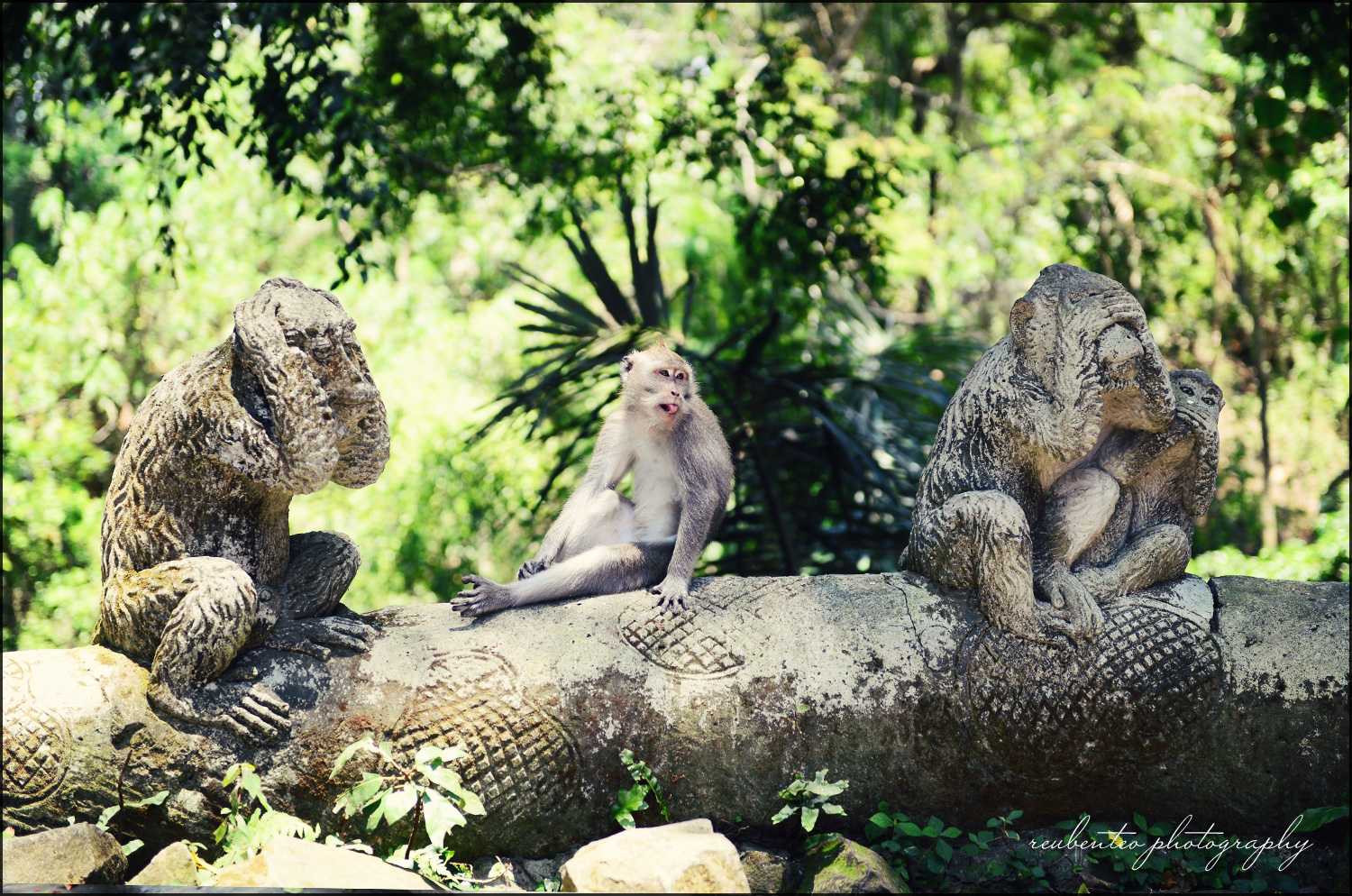 Our next stop was to the Ubud Monkey Forest. We were greeted by fruit sellers that sold bunches of bananas. We didn’t bothered to get any because Fann was pretty freak out about the naughty monkeys that were storming the place. We strolled along the pathway and snapping our photos. Some of the monkeys didn’t even cared about us as we pointed our cameras at them. 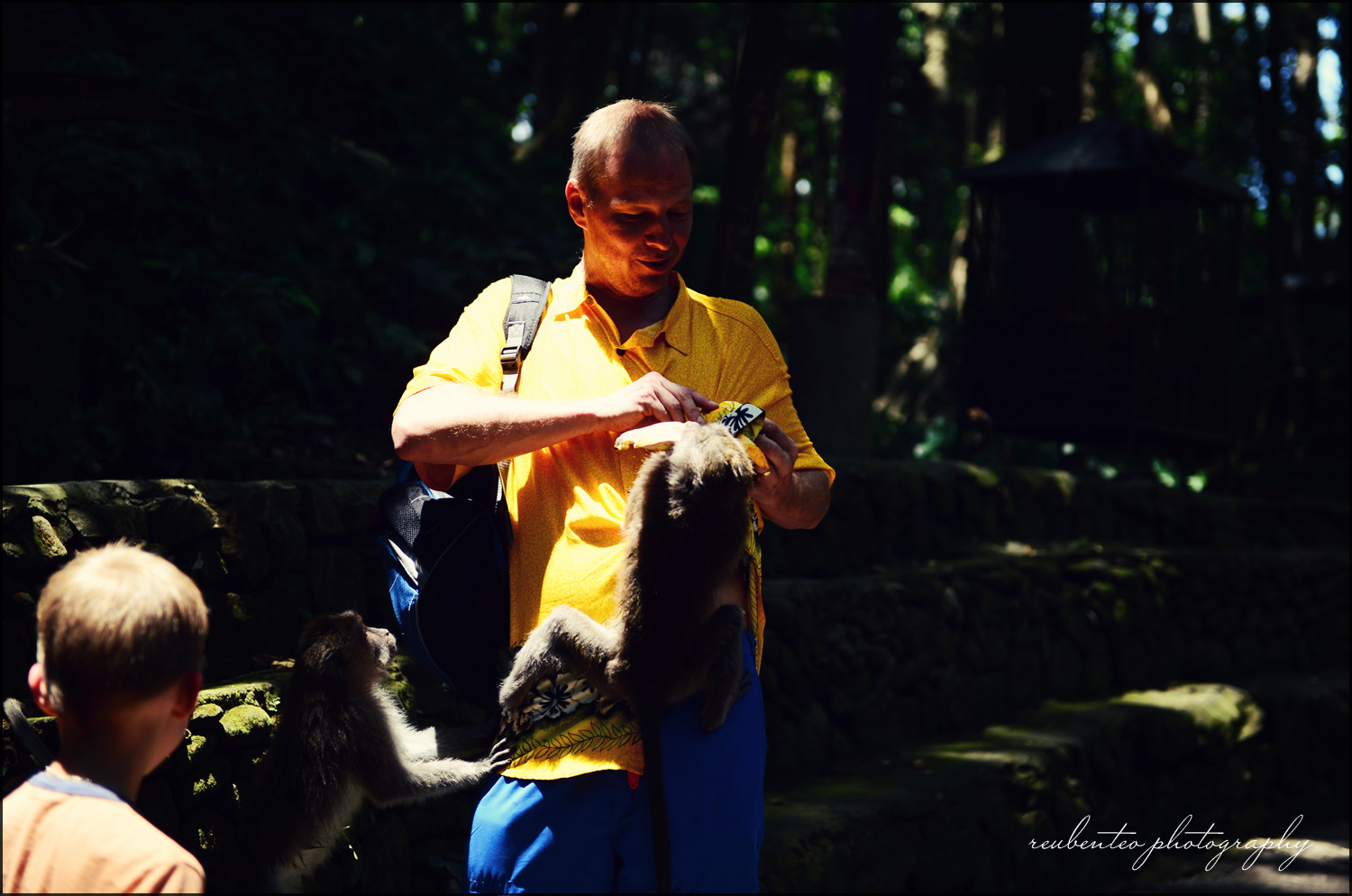 Monkey Madness for the banana man

But in front of us was an American with his son and dad. He was trying so hard to hide the bananas he bought. The monkeys were climbing all over him. He told his son that he shouldn’t have wore a yellow shirt to the Monkey Forest. The monkeys enjoyed stealing and grabbing the bananas off of him. 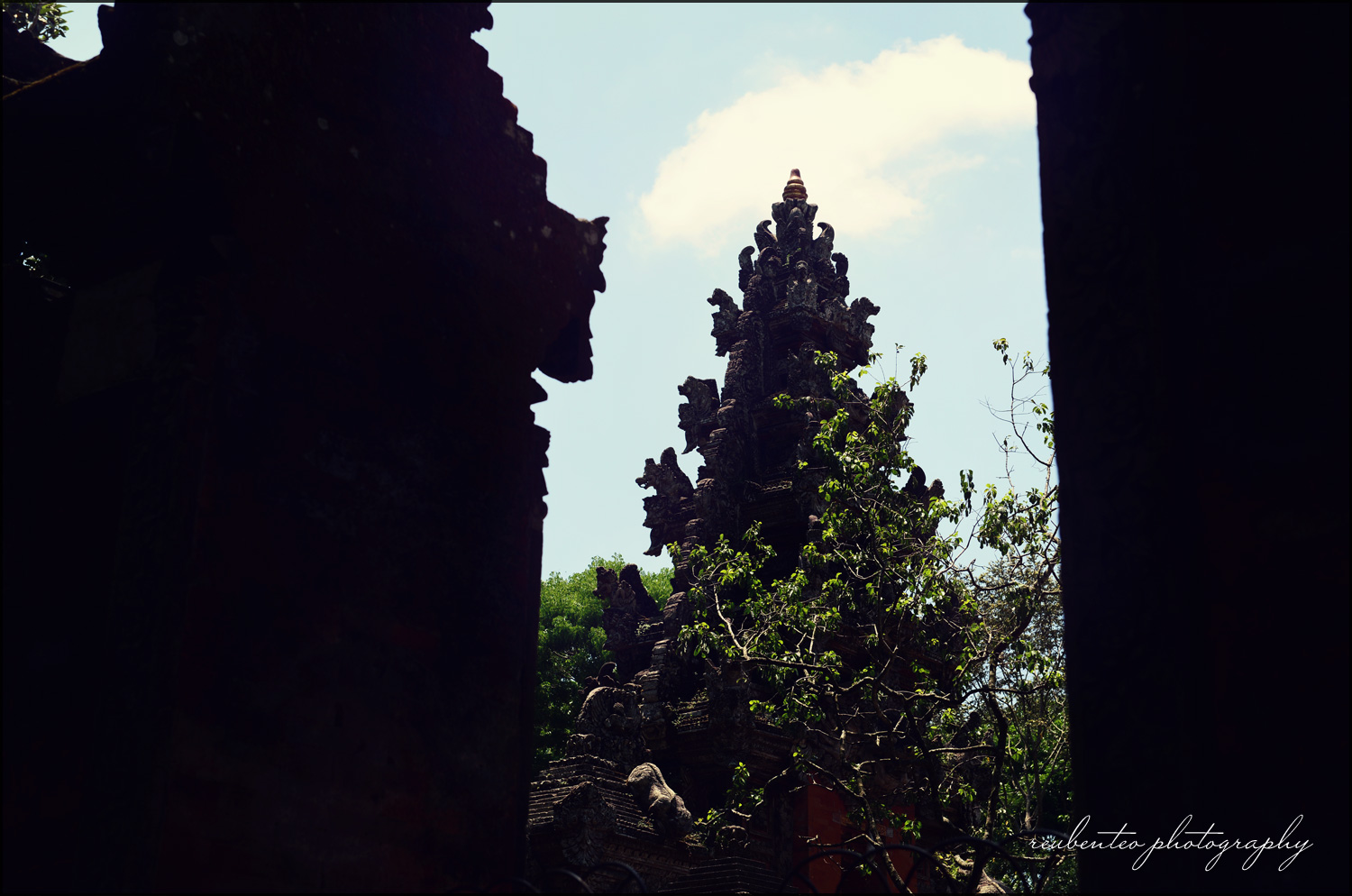 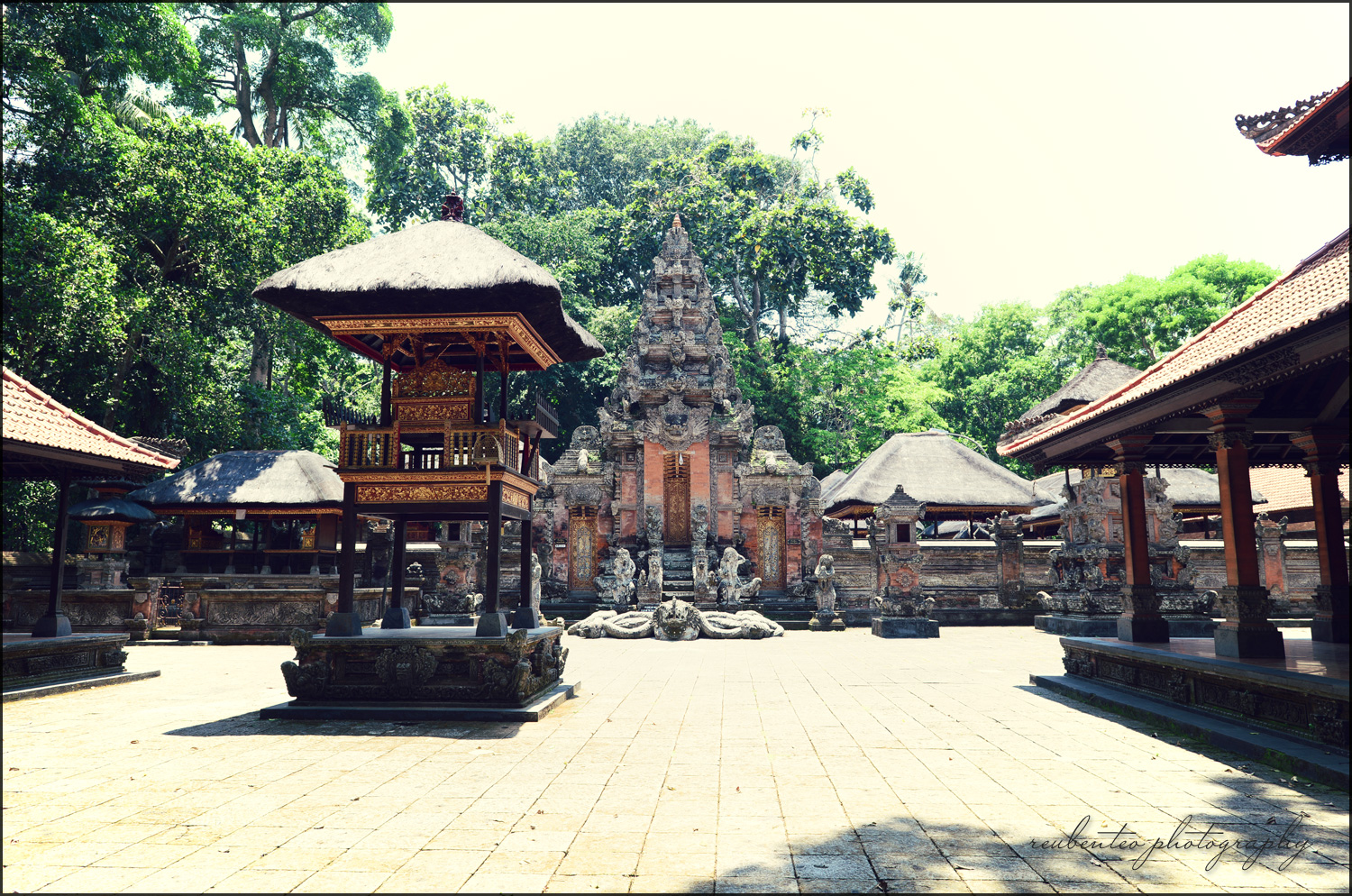 In the forest, there was a beautiful temple that seemed off limits to tourists. It’s called the Dalem Temple and the fact that it’s hidden, makes it looked magnificent. Surrounding this temple gates are statues of various mythological creatures and monkey statues as well. After stealing some shots, we headed back to our van where Boby was waiting for us. It was around 11:30am and the weather was very hot. Boby told us he was going to bring us to eat the famous Babi Guling at Ibu Oka, Ubud. 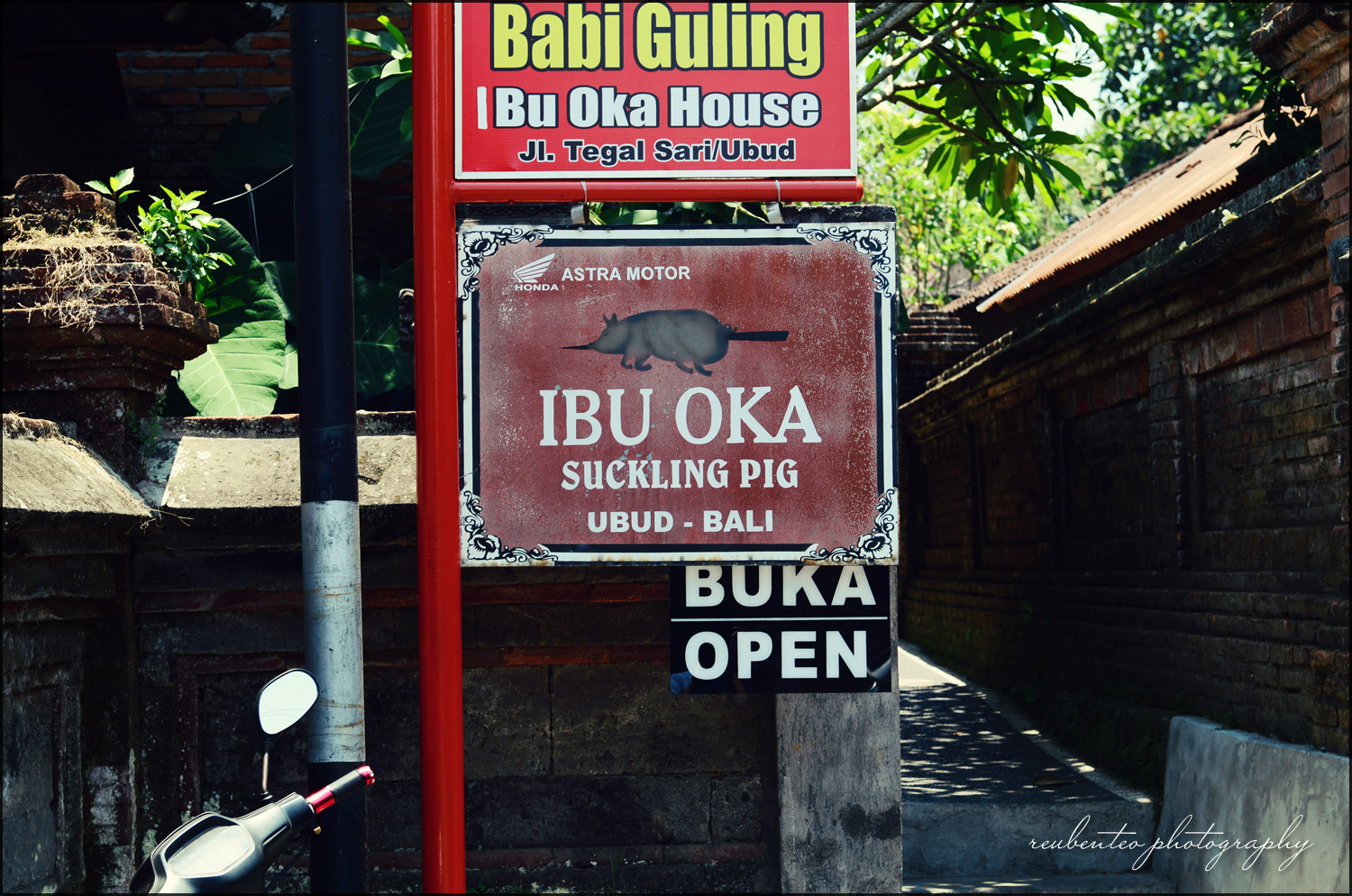 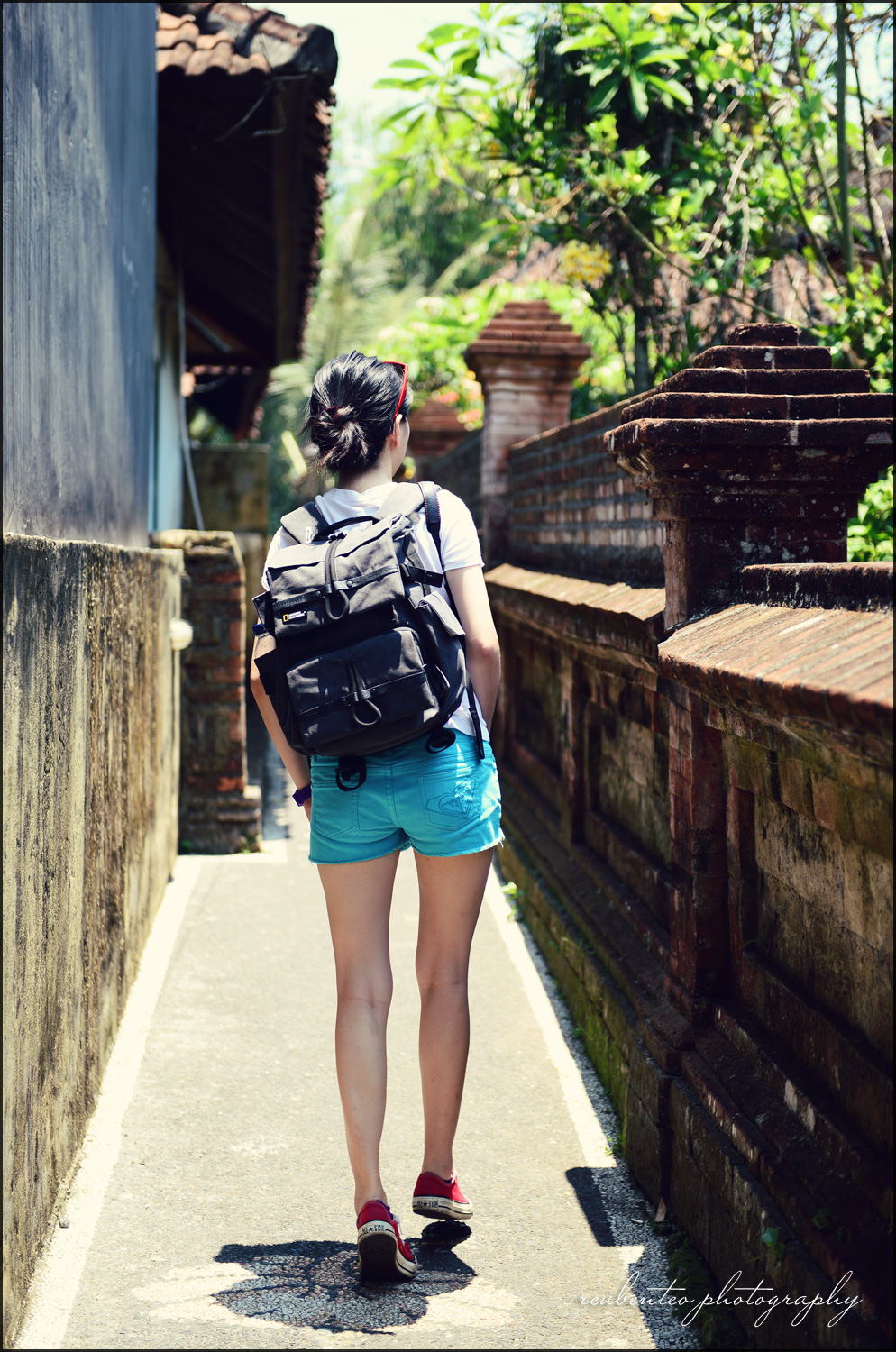 When we reached Ibu Oka, the place was so crowded that some were eating while standing under the sun. One of the waitress came to our van and told us to go to Ibu Oka’s house which was nearby. Boby drove us there and thankfully it was shaded and not as crowded with horrible tourists. 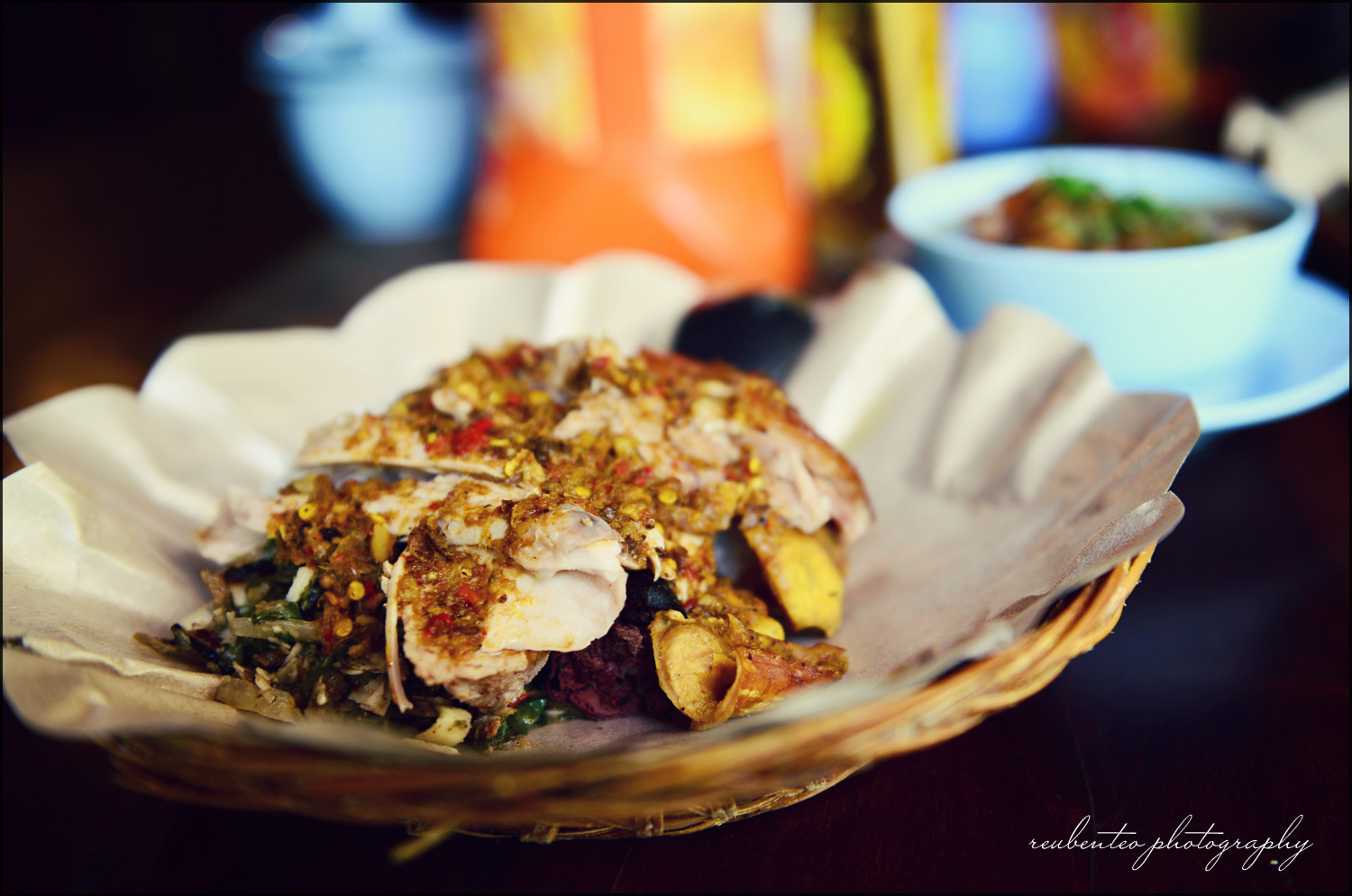 Babi Guling is called Roast Suckling Pig in Indonesia. Babi guling is usually served with lawar and steamed rice, it is popular dish in Balinese restaurant and warungs. The most famous would be Ibu Oka’s. It is a must try when you are in Bali, provided that if you are non-Muslim of course. Fann and I ordered the Babi Guling Special (IDR30,000) and Daging Babi Guling (IDR40,000). 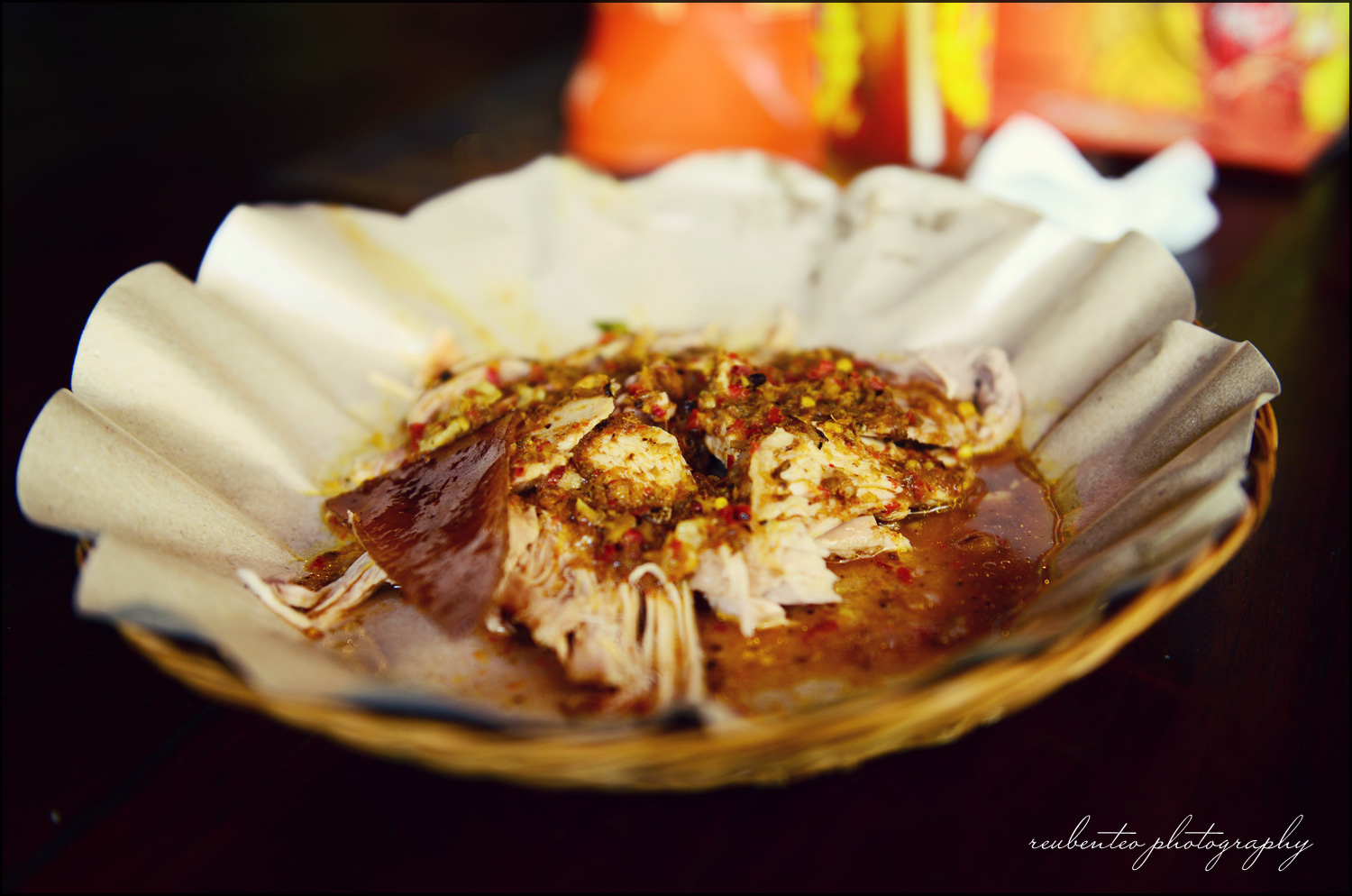 Ibu Oka’s babi guling was really delicious. I saw on some blogs that stated it’s over rated, but I thought it tasted fantastic. Being a rather huge fan of pork, my friends kept telling to try the babi guling in Bali. Now I totally understand why they were pestering me to get my hands on one. The tender pork and the crispy pork skin was so heavenly I could fly to the moon. The spicy sauce they use for the dish has a very strong UMPH! to it and if you’re not a big chilli fan, wash it down with their cute little Fruit Tea that comes in a glass bottle.

After lunch, the both of us stayed for a while to enjoy the beautiful Ibu Oka shop while sipping our fruit tea. Since it was noon, we were feeling a bit lazy to walk out towards the heating sun. Our trip to Ubud ended with delicious and very satisfying lunch. Stay tuned for my next post on our next destination.