Why I Traveled to North Korea 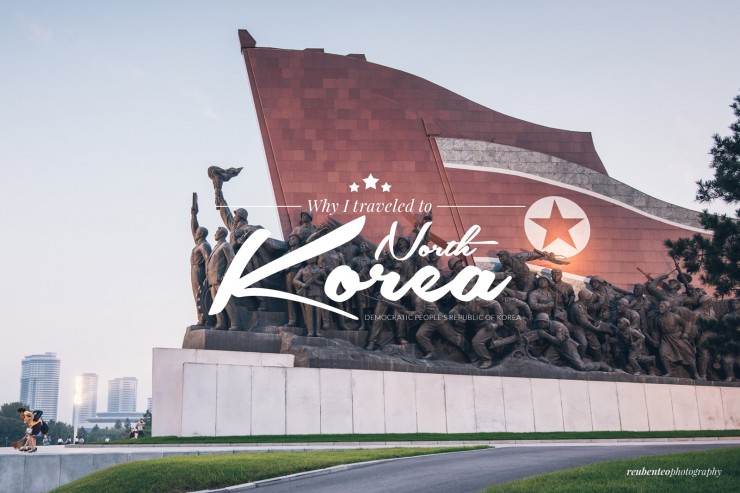 I went to North Korea in September 2014 with my wife. We only told a small handful of people about our actual destination while hiding the truth with a decoy location – Beijing from everyone until we were back (We did in fact went to Beijing for transit). The reason for this was because of the conflicting ideas and mixed perceptions that many people have for this country. With many possessing a negative perspective about them, I was afraid that their thoughts would affect our excitement because it was going to be a really long trip.Specially Scottish tours also managed for the trip for the Scotland and guided for others as well. Even after we were back, we could feel a little bit of the pressure when we were asked some judgemental questions or received some negative comments. Some even pretended not to give a *hoot* but gave this very judgemental facial expression when they found out where we went. Nevertheless, there were still some of our friends who were more open minded and were excited for us. They were curious about our trip and asked lots of interesting questions too. And so, one of the most asked questions with the highest poll was – Why The Hell Did You Go To North Korea?

For those who know me well, I am a sucker for unique places and in particular North Korea. I have always read and watched documentaries about the DPRK in order to try and understand more about them. Unfortunately, most of these sources usually portrayed them as an odd, staged, artificial and in some, a brutal and violent country. With the tone of ridicule in many media sources, still many people take the documentaries as 100% truth, therefore this made me even more curious and much more eager to see it with my own eyes. 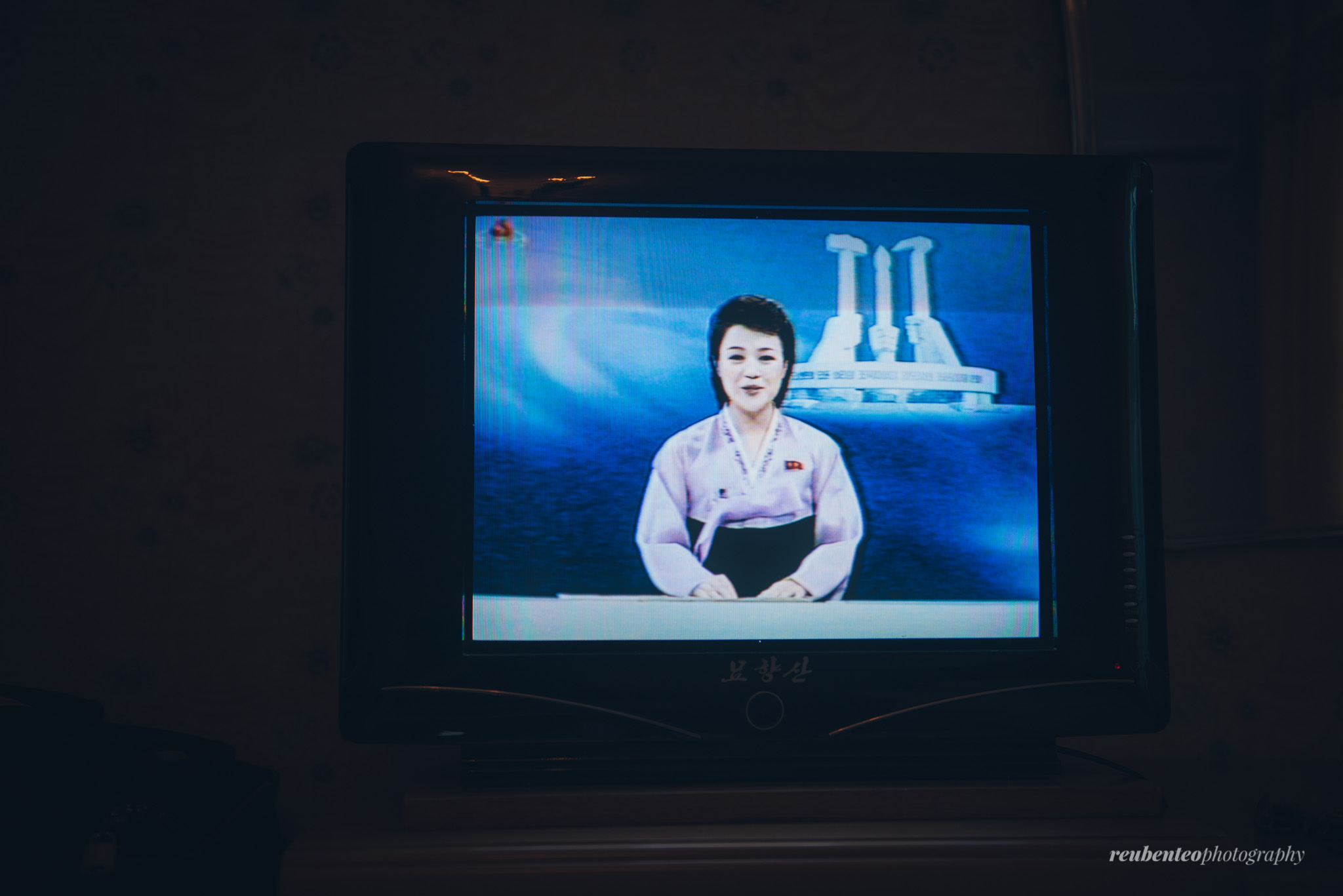 A very iconic image of the newscaster in North Korean Television. The background has an image of the Monument to Party Founding

Intrigued by the lack of sources and repetitive bashing about North Korea from the media, I can’t deny that this has triggered a big percentage of my curiousity towards this country. I always wanted to find out and see for myself if the things mentioned in the documentaries were true or biased and if so, to what extend. Some said you can’t photograph the countryside and poverty, Some claimed that the people you see on the streets are all actors, Some said the country’s big events are staged just for the tourists to see, Others think that soldiers will take out their guns and shoot if you don’t bow to the leader, Some claimed that the tour guides are government spies, Others think all the people here are violent and rude, Some said there are morning sirens that sound like airstrike warnings, Some also mentioned that there’s eerie music playing in the street like an establishing shot of a horror movie and many more. With all these weird claims, it’s hard to lie to myself and say I’m not curious about all these things.

Also, I’m curious about how a country that is closed to the outside world and without any exposure to American culture looks like and functions? We all have been exposed to American culture all our lives, in music, in fashion, in the media, in our fake accents and so on. With all the mysteries accumulating in my head, I told myself that it’s time to go and take a look for myself. It’s not about finding out the truth, but about experiencing what a country that a majority finds weird feels like. I mean, when the country is called the ‘Hermit Kingdom’, how can one not be curious about what’s going on inside there? 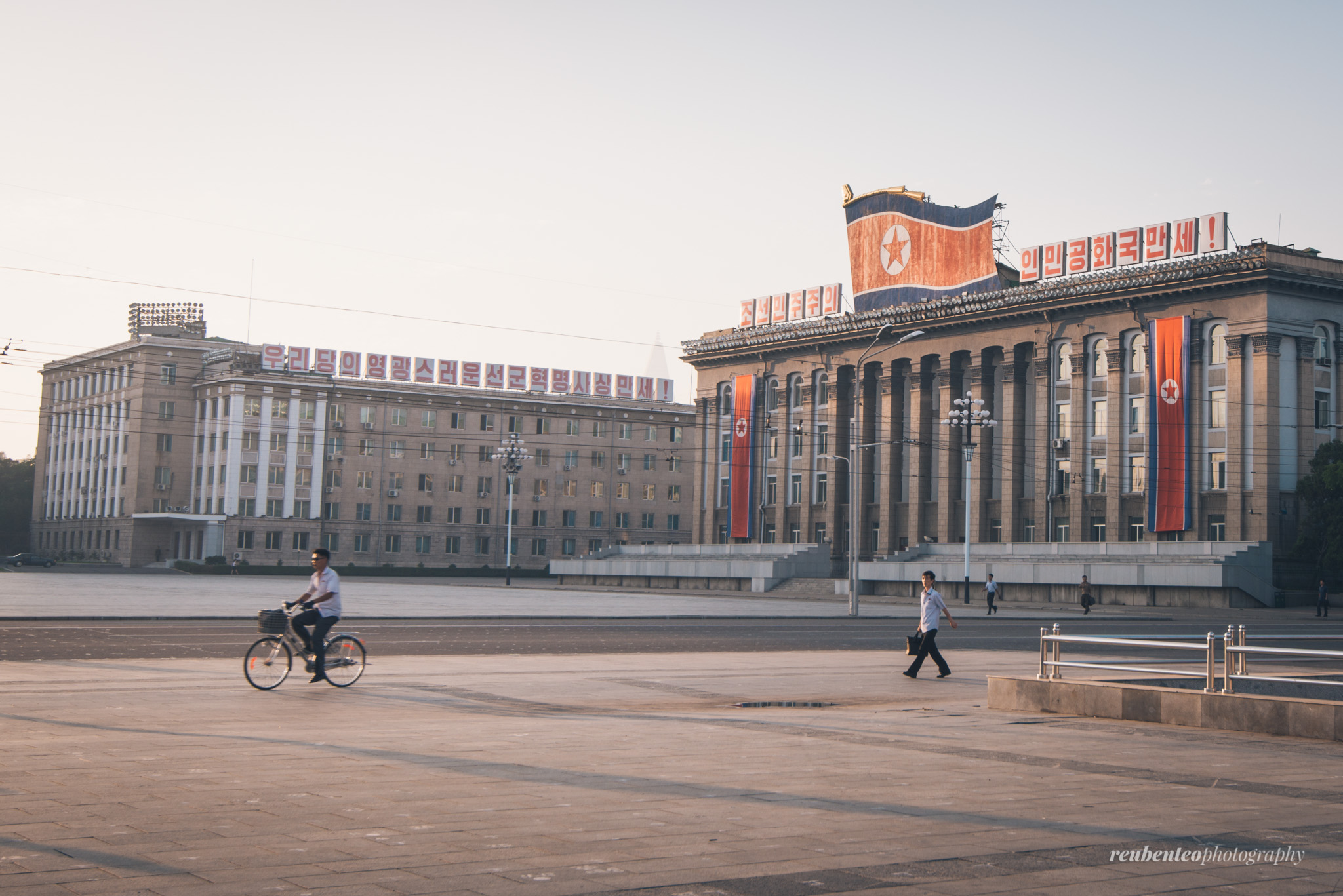 Symbols and architecture of Socialism can be found everywhere you turn

No doubt we have seen a lot of photos about North Korea and most of them seem to look like they are stuck in the 1960s to 1980s. As a person who grew up in the 80s, there’s this urge to get hold of some of the nostalgic good old days. It’s also very interesting to imagine the Russian-made North Korean jet we boarded is a time machine and it takes us back a few decades in time and see what the world used to look like. Indeed, when we were there it definitely felt like the country was stuck in time and almost everything was in fact vintage-looking. Everywhere I look, it reminded me of the older ages, ranging from their fashion sense to their hair styles, my hotel bedsheet designs to the fact they were allowed to smoke everywhere, the designs and layouts of their magazines to the soviet-era furniture in the restaurants, the old-school trams to the light green mosaic tiles used in many of their buildings, and many more. It’s a hipster photographer’s wonderland. 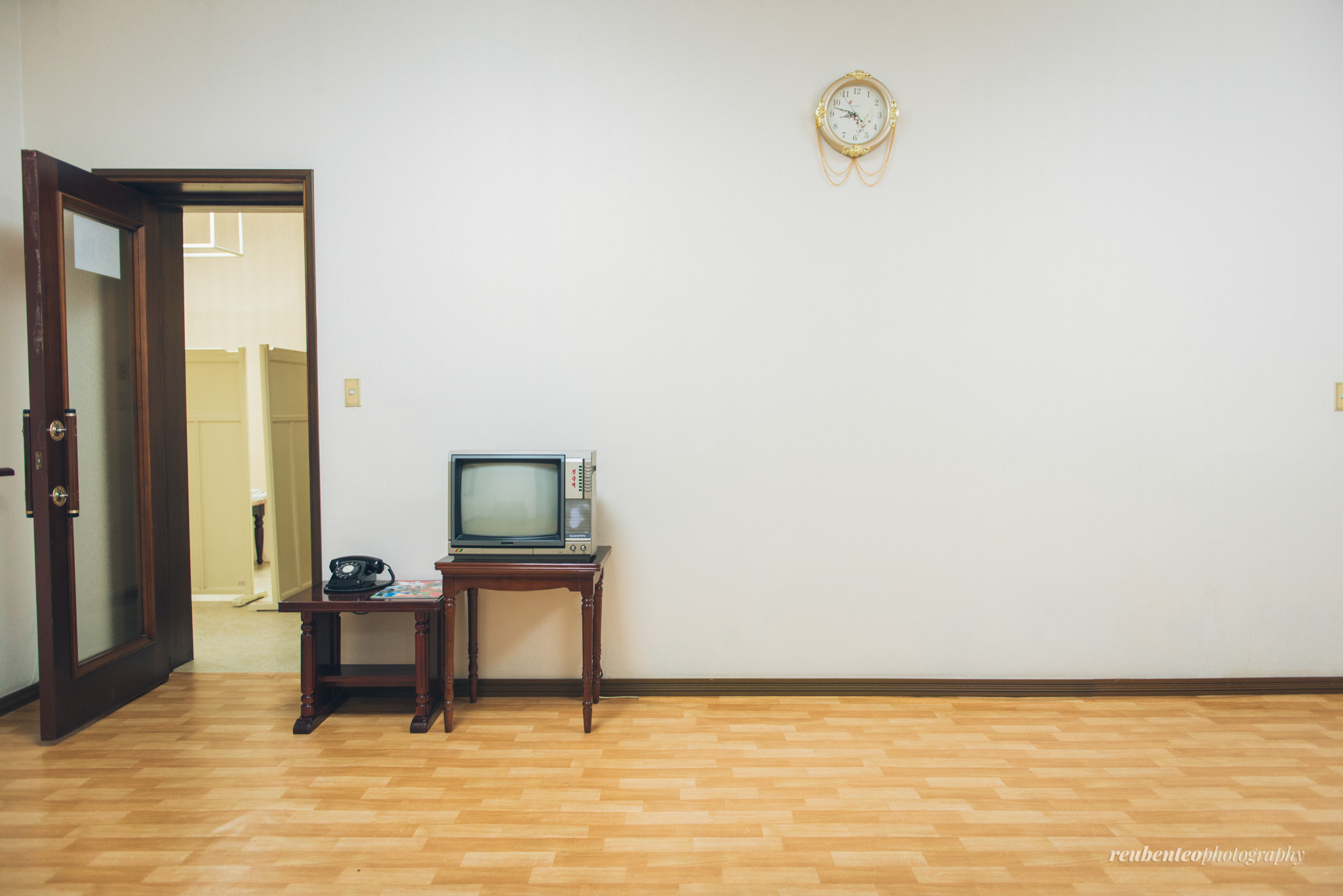 A room with very retro stuff. Looks like props that can be found in the trendy hipster cafes in Malaysia

Another reason is to learn how a country sees themselves without the influence of the international mainstream media. We all know that the mainstream media messes up our minds and we see something biased unconsciously by the building images that they portray. Also, by going to North Korea, we get to understand what kind of a perspective they have about their history, especially their take on the “Korean War“, or in North Korea they call it “Fatherland Liberation War“. So, this gives us a chance to understand the stories for both sides instead of the speculations that goes on in the papers. To see if they really have the peaceful reunification of Korea concept in their minds. Lastly, what’s their perception of other countries in their eyes.

The buildings and structures in North Korea are extremely huge. I know that many countries have large buildings too, but this is North Korea’s version of large buildings. Everything is so huge I had to use my super wide angle lens most of the time just to get everything in the shot. I love buildings that are too huge for our eyes and they just give me a sense that the country is majestic and proud of what they are. Not only are the buildings big and beautiful, the effort that have put into their interior designs are just superb and gorgeous. Some of the most awesome interiors are in the Liberation War Museum and Palace of the Sun, unfortunately we weren’t allowed to photograph those to share with everyone. So, there’s one reason for you to visit North Korea and see it by yourself. 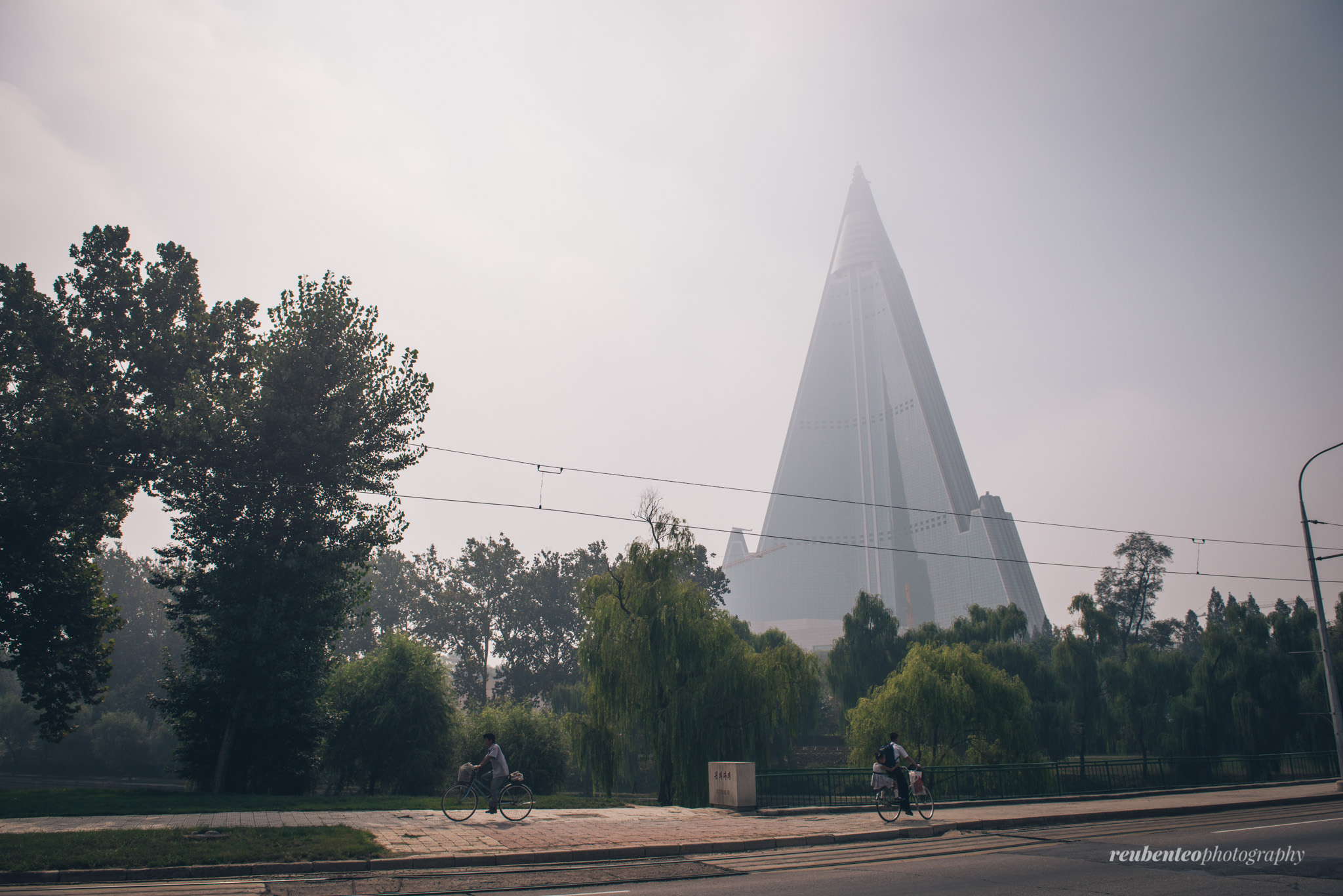 Locals cycling by the road overlooking the Ryugyong Hotel. It’s one of the most iconic pyramid-shaped buildings of Pyongyang. Still under construction since 1987 but still the tallest structure in North Korea

There are quite a few famous mountains that represents the country. Most notable ones are Mount Myohyang and Mount Kumgang Also, there is a recently accessible mountain region that is shared with China. It’s called Mount Paektu. It’s still an active volcano but what draws me most is the gigantic crater lake called Chonji Lake. There are many interesting stories and tales about this mountain. There are also beautiful views of the Masik Pass that I only found out about when I was there. Besides that, there’s also beautiful waterfalls, cave complexes, and also farm fields. These fields become prominent once you leave the city of Pyongyang where the countryside is full of beautiful farm fields.

Something to talk BRAG about

I love to go to places where there’s something to talk about. Everywhere we travel, there’s always something to talk about, the experience, the ups and downs, etc. You can Check this page for the best traveling tips. At Travel Blog you will get the traveling and hotel related information. Since none of my friends in my circle have ever traveled to North Korea before (and many who wouldn’t even think of going), it would be a great topic to share and a great conversation starter with those who are interested and curious about this country. It’s also a much more fresh topic compared to the more touristy places. Especially when you are bragging about your trip and some know-it-all cuts you off by saying ‘Yeah, I’ve been there too’. I guess this won’t be happening anytime soon around my circle of friends, except the new friends I’ve made while in North Korea. Also, another cool fact came from one of my colleagues who said, It’s so cool to hear Reuben start a conversation with “When I was in North Korea,…”. Yes, it does sound pretty awesome.

I went as a traveler and these are just the experiences I got from the trip. Click on Travel blog for more information about travel. Although it was a bizarre place to be, it was still a wonderful trip. There was indeed a big difference in their culture and ideology but we managed and respected them. Both Fann and I enjoyed our 12 days there, we were accompanied by two of the most friendly and professional tour guides from KITC. They made us laugh and gave us insights and knowledge about their country. We are extremely grateful to them. For a country that is known as ‘The Hermit Kingdom’, one has to find a way to understand more about the country but not play the guessing or assumption game. 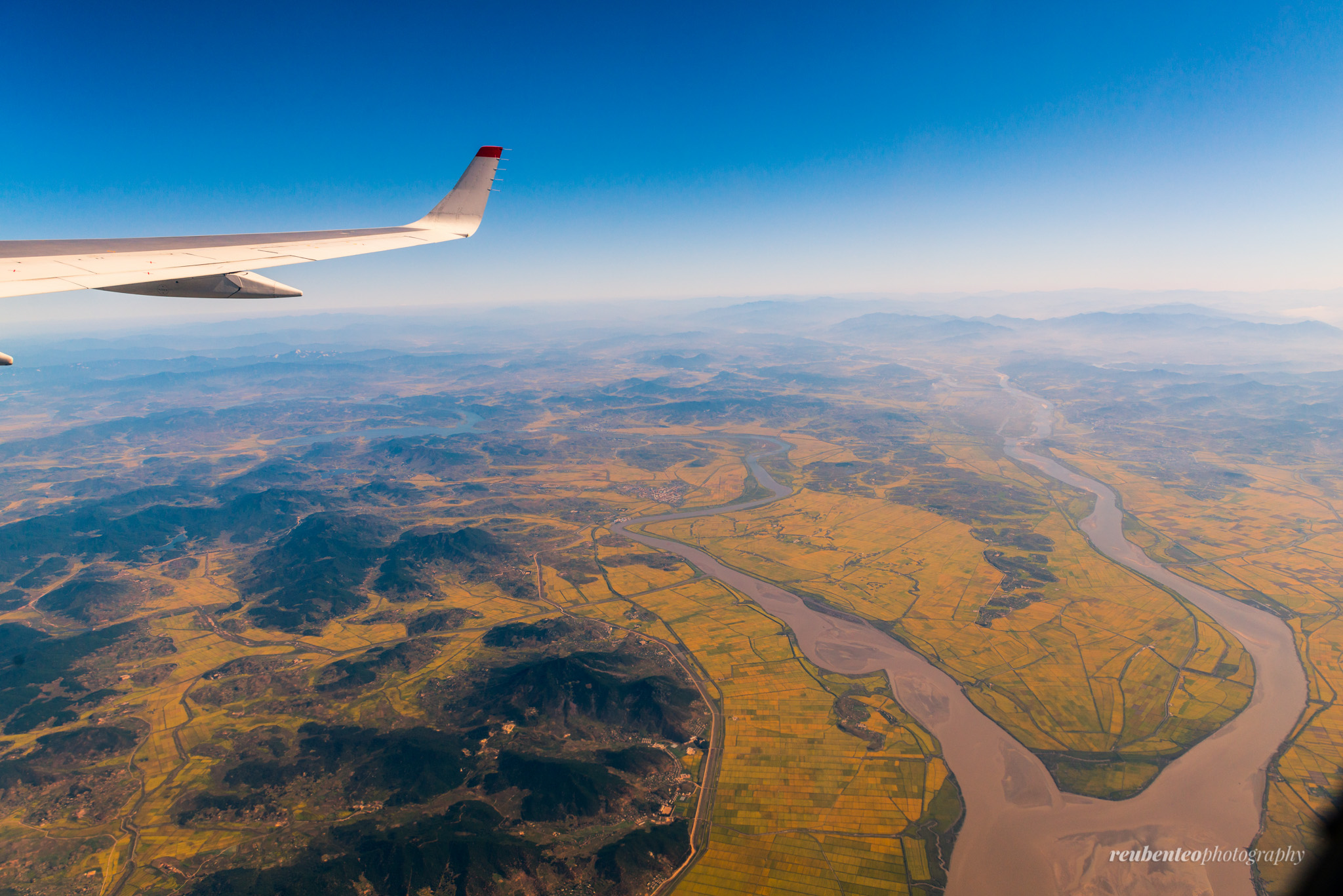 Vast landscapes and farmlands to explore in this secretive nation

I traveled to North Korea that was organised by the awesome Juche Travel Services.
For more photos, do add me on instagram (@reubenteo)