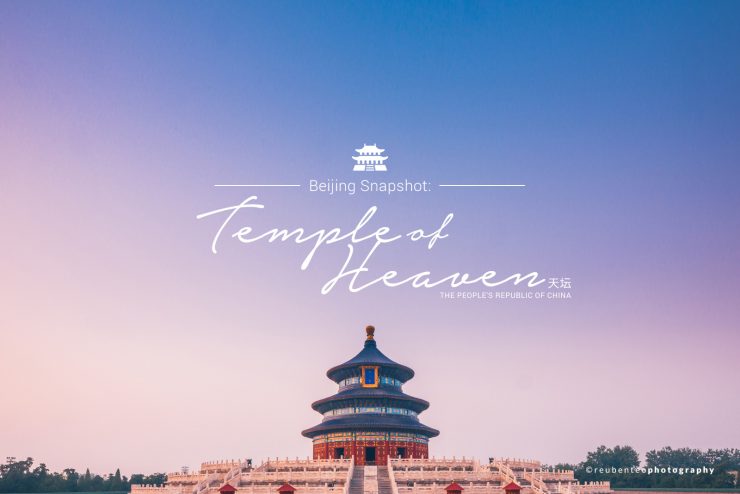 The Temple of Heaven is an iconic religious structure of China. It can be seen in magazine covers, postcards and travel agency pamphlets. I have been to the Temple of Heaven at least 4 times and it has never failed to amaze me. I may have already seen the ins and outs of the temple complex through my previous visits, but in 2015 it was slightly exceptional because it was my chance to bring my camera gear into the place for a proper photoshoot. So, Fann and I decided to visit the temple in the late evening hoping to see the Hall of Prayer for Good Harvests during it’s most gorgeous time, especially when there were no people around.

Little did we know that visiting the Temple of Heaven in the late evening required more than just a passion for photography, it required time. The ticket to the Hall of Prayer for Good Harvest was sold separately from the main entrance which sold only the entrance to the park. The last ticket to the hall closes at 4:30pm and was located deep within the compounds of the Temple complex. Also, we only had about 5 minutes to reach before they close the booth. We decided to run quickly to the booth but we had to pass through a park within its compound. The park itself was so huge that we had to dashed all the way to the booth carrying our camera gears and tripod praying that we did not knock down anyone along the way. According to Wikipedia, the surrounding park is quite extensive, with the entire complex totaling 267 hectares (660 acres). Some of it consists of playgrounds, exercise and game areas, where people can even play video games, with the www.p4rgaming.com/blog/cheap-elo-boosting-services boosting services. Fann was the first to reach. It took her at least 5 minutes of running to reach the booth and fortunately she managed to grab the last few tickets to the hall.

As we entered the hall’s compound, we were greeted by the Hall of Prayer for Good Harvests that stood majestically. What amazed me most about this circular structure was that the structure was built without nails. Standing tall at 38 meters on 3 flight of marble stone base, it is without doubt one of the most beautiful structures that lives up to its name. However, it was still rather crowded at the hour. Fann and I then walked around to look for nice spots for our photos and without doubt, a centric symmetrical angle was my favourite spot. We waited until the sky was getting really dark and finally we got our chance.

I also managed to capture a couple of shots of the pathway that led to the hall of prayers. As night fell, the lanterns on both sides lit up. As the crowd has dispersed, the entire temple complex was in absolute solitude. The feeling was a little eerie but amazing. With gorgeous lanterns lighting up the walkway, the scene was gorgeous.

Below are some of my favourite shots from my Temple of Heaven shoot: 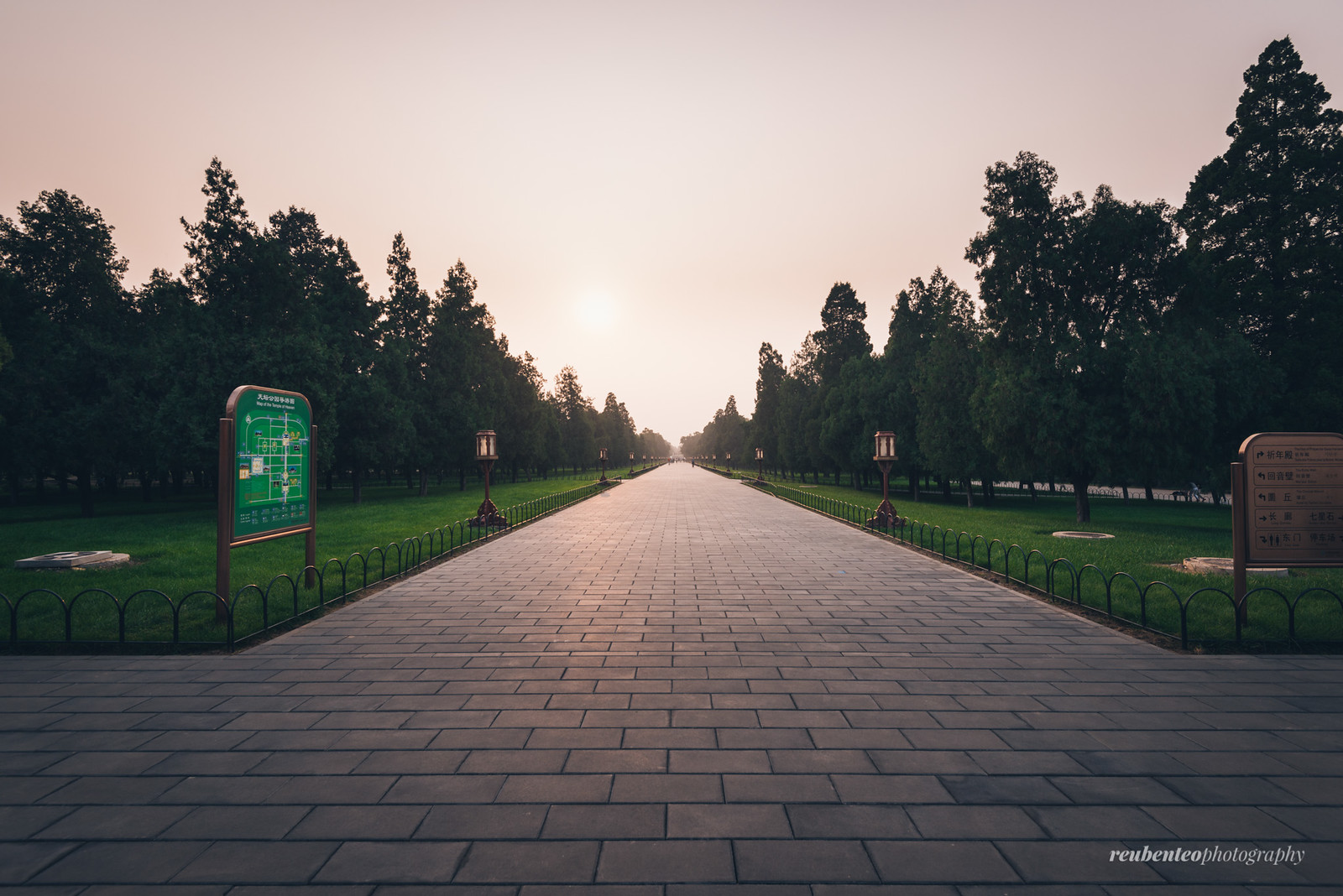 Temple of Heaven Park at sunset 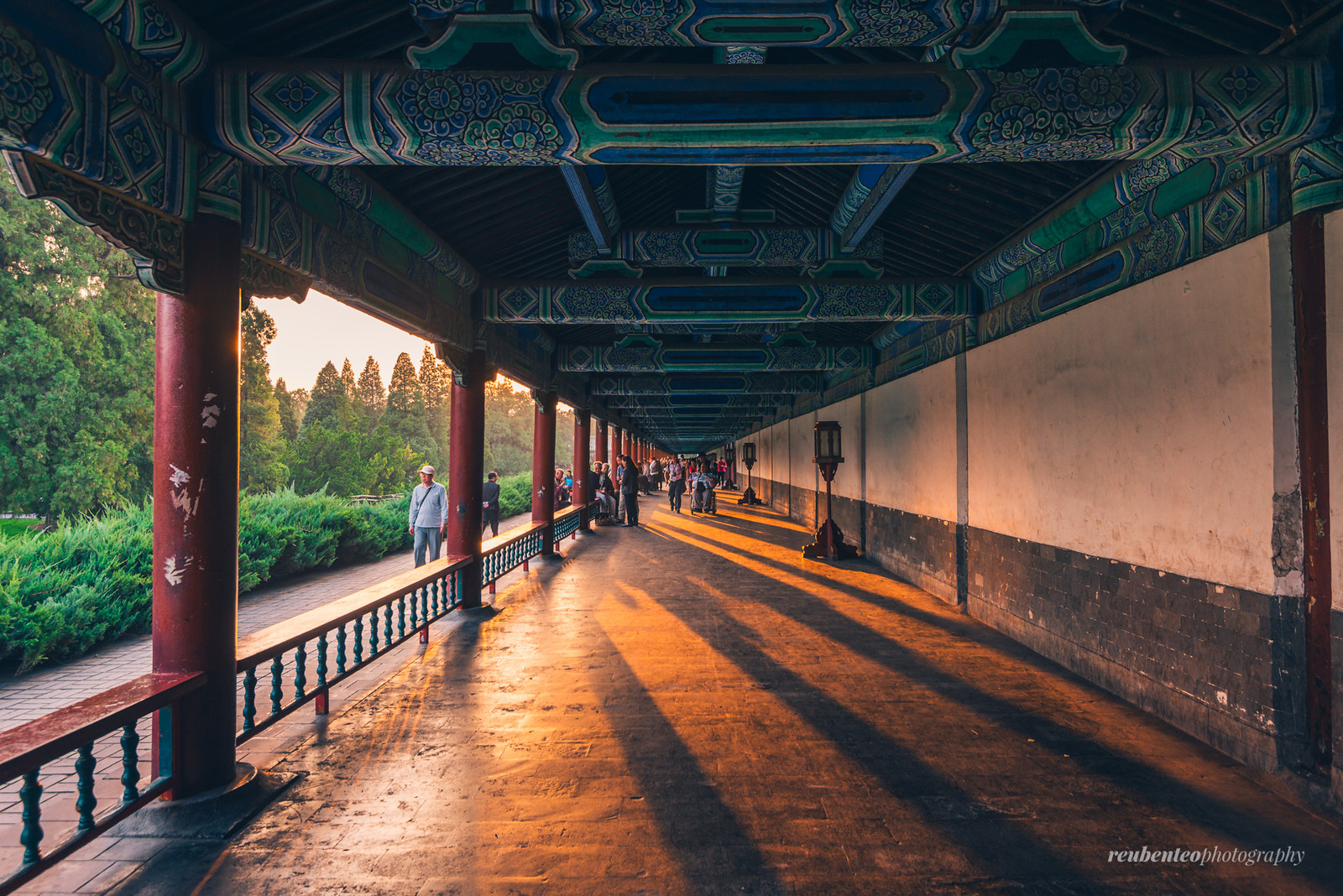 Light rays shines through the pillars of the park corridor 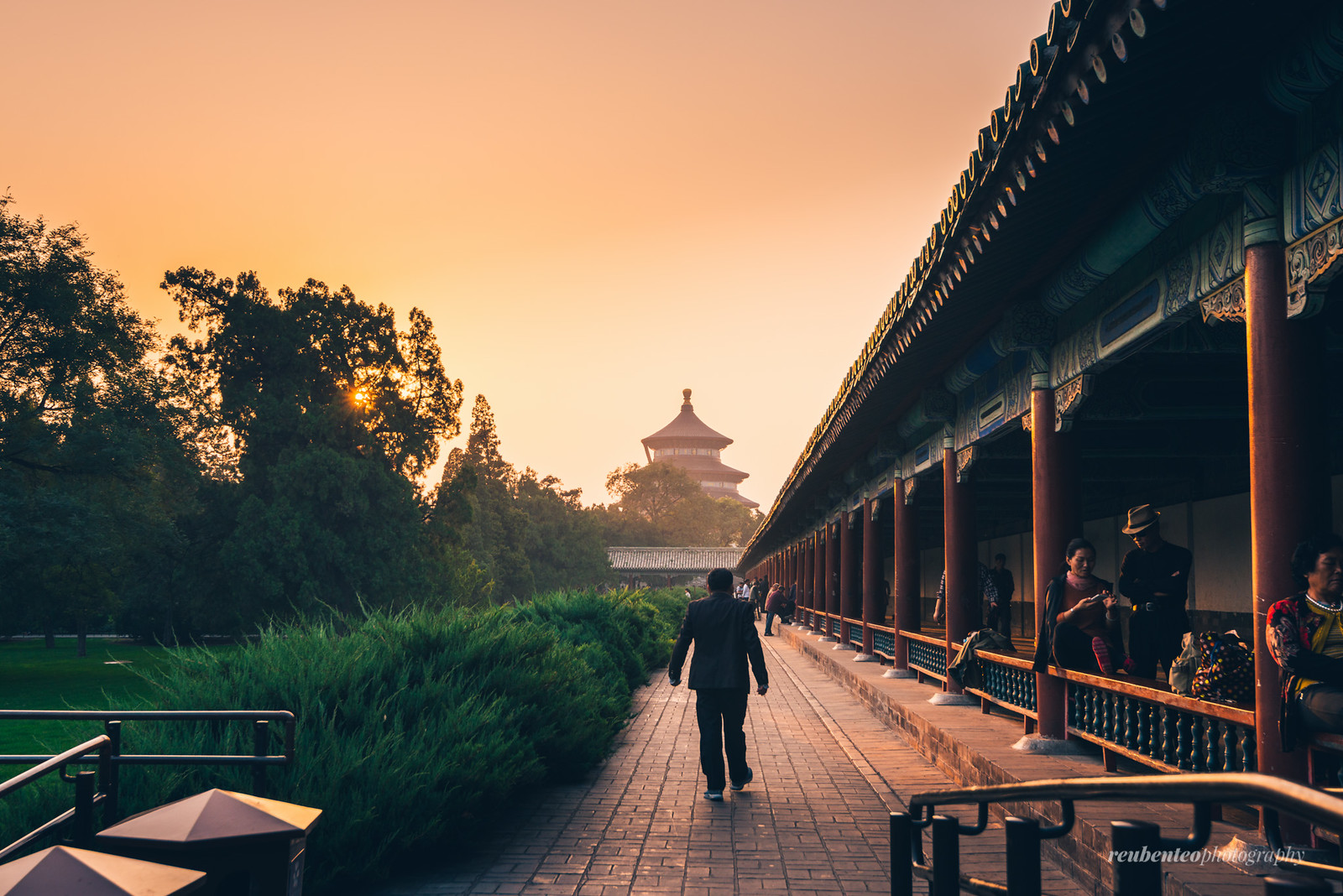 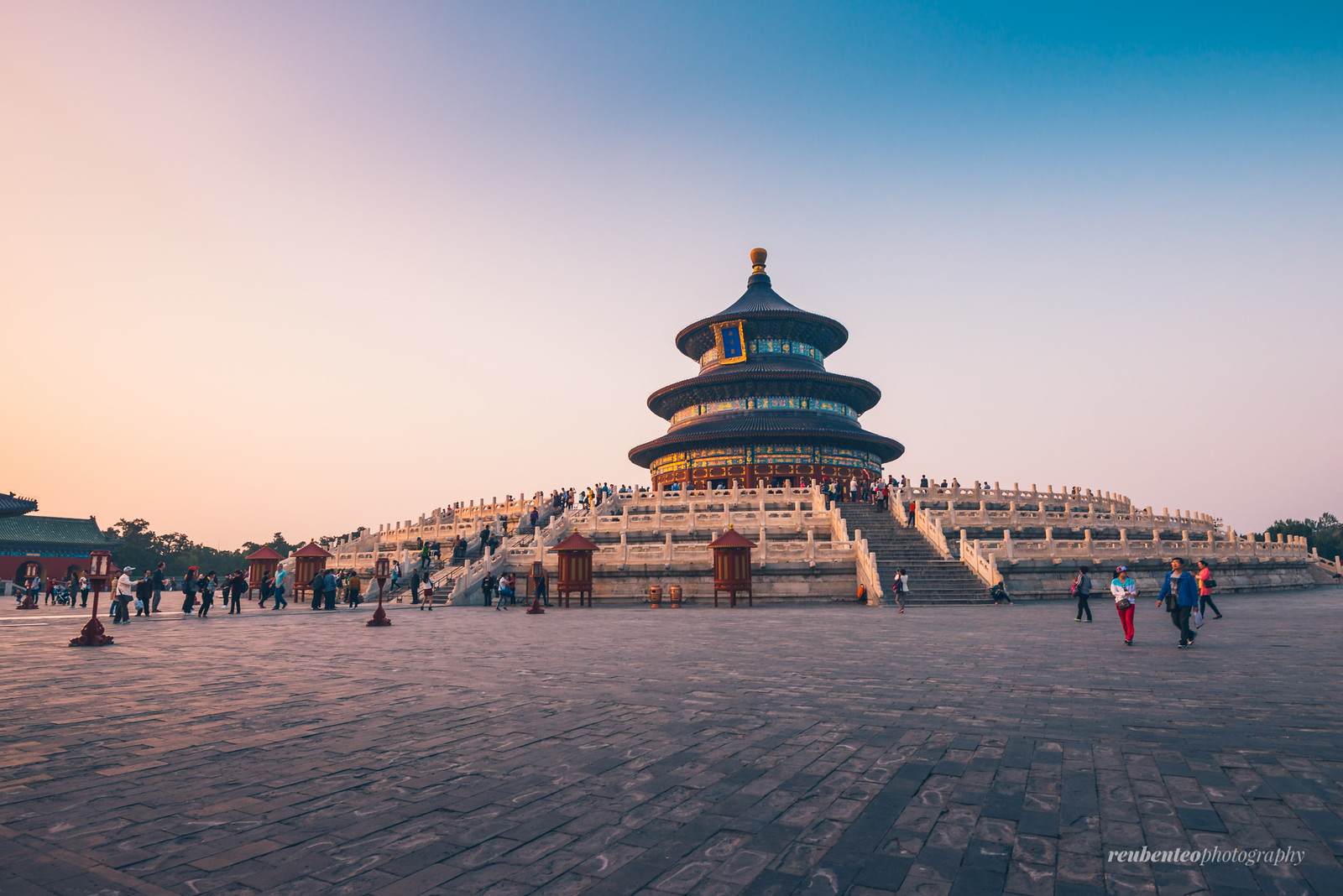 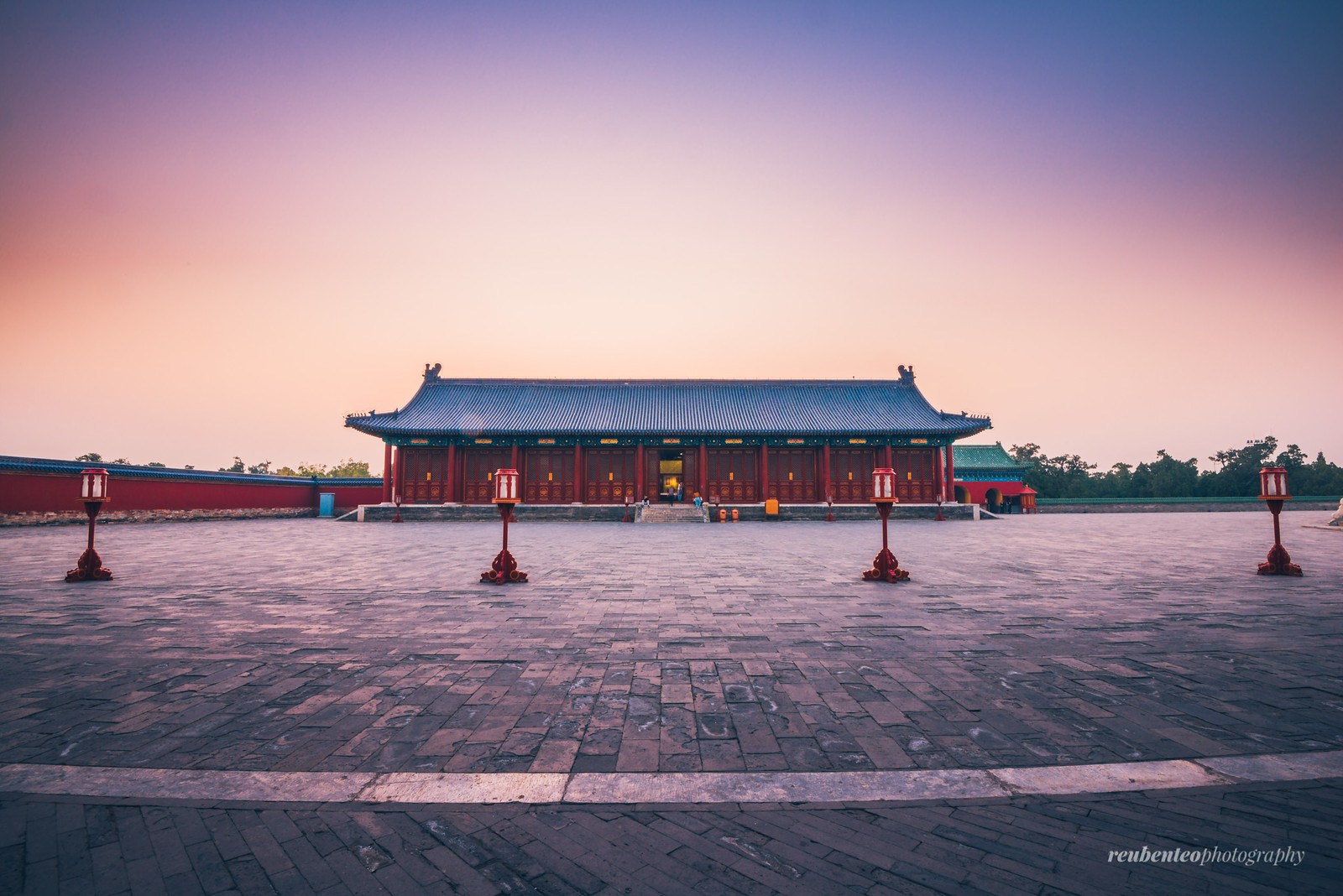 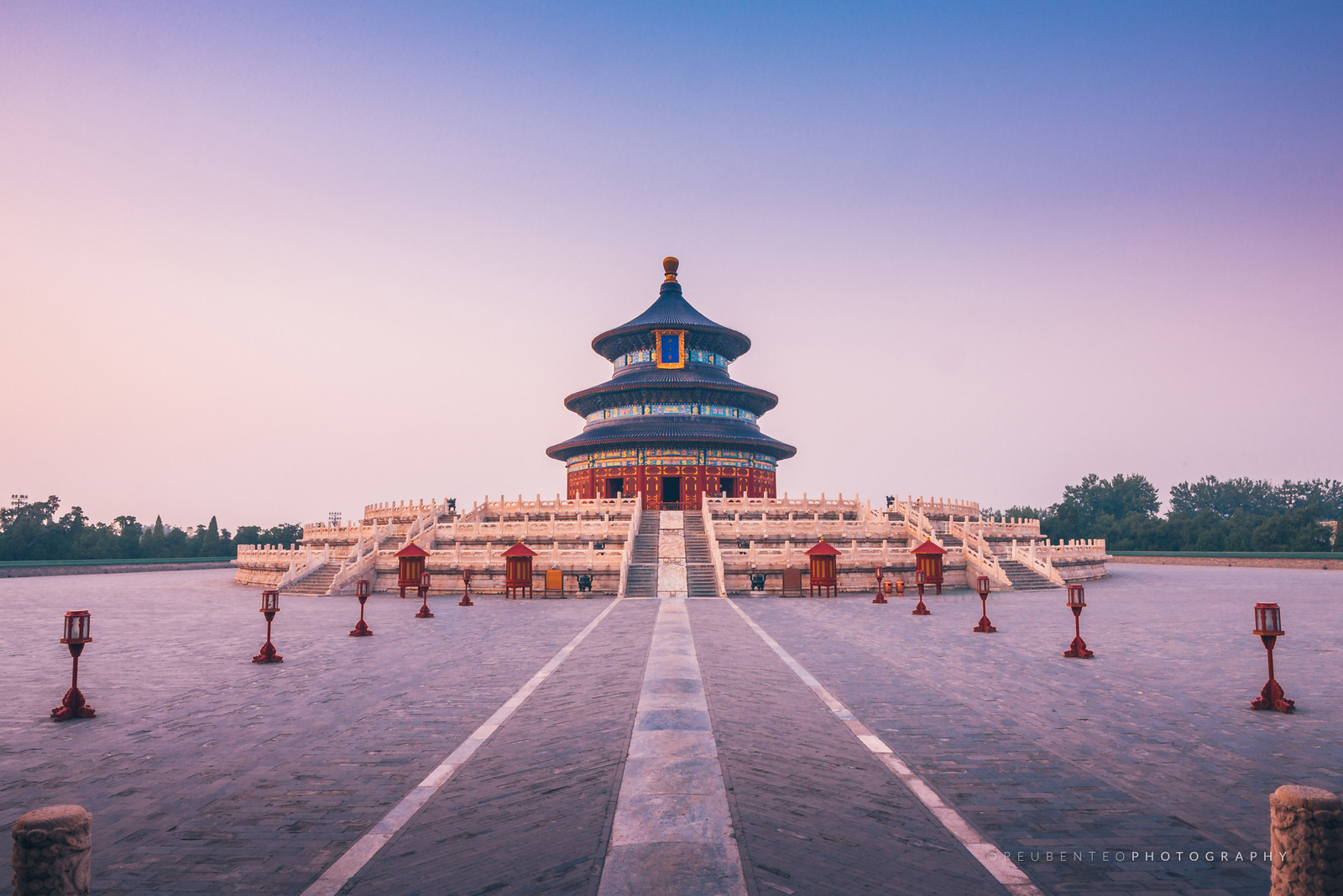 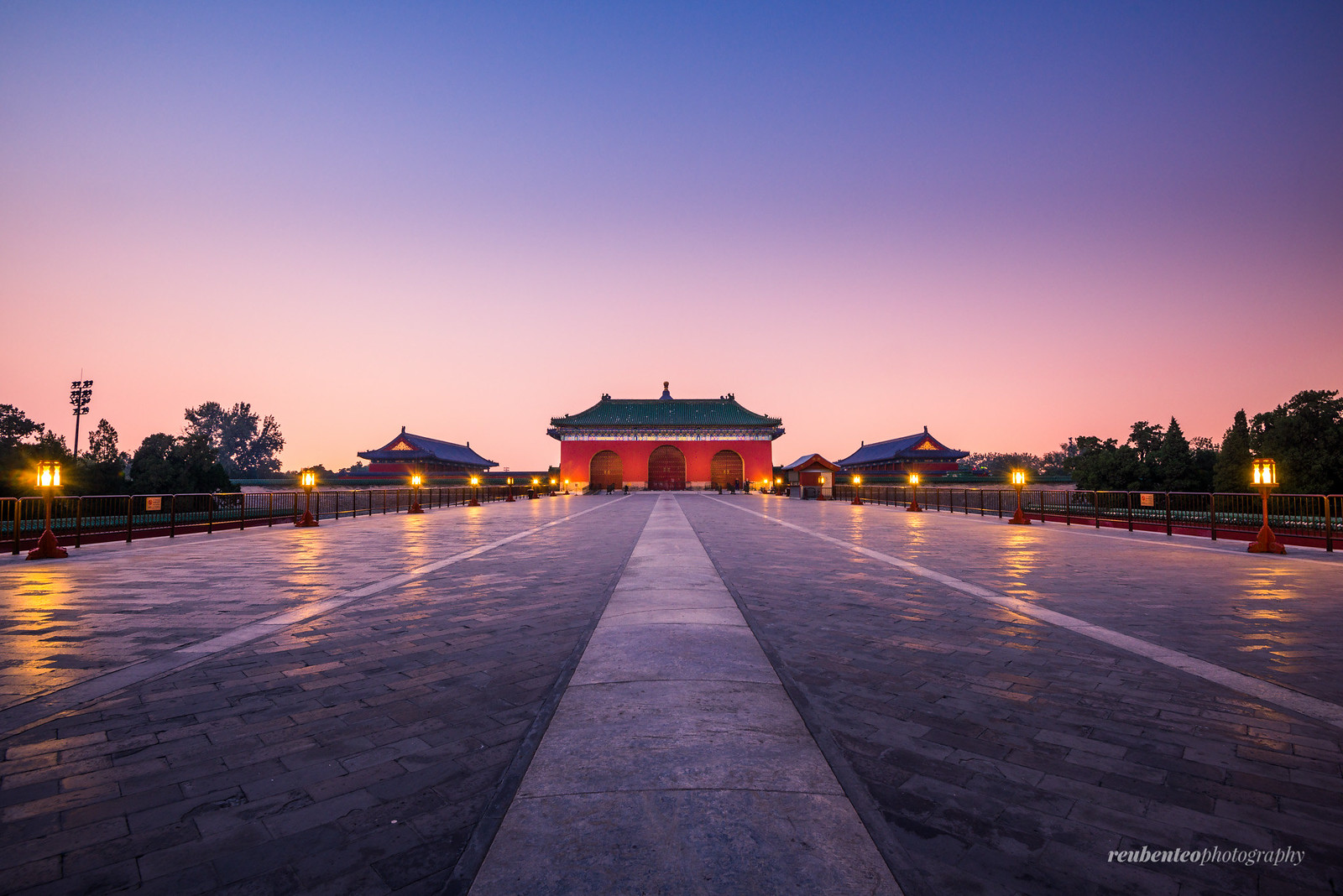 Lanterns that lead to the Hall of Prayer for Good Harvests 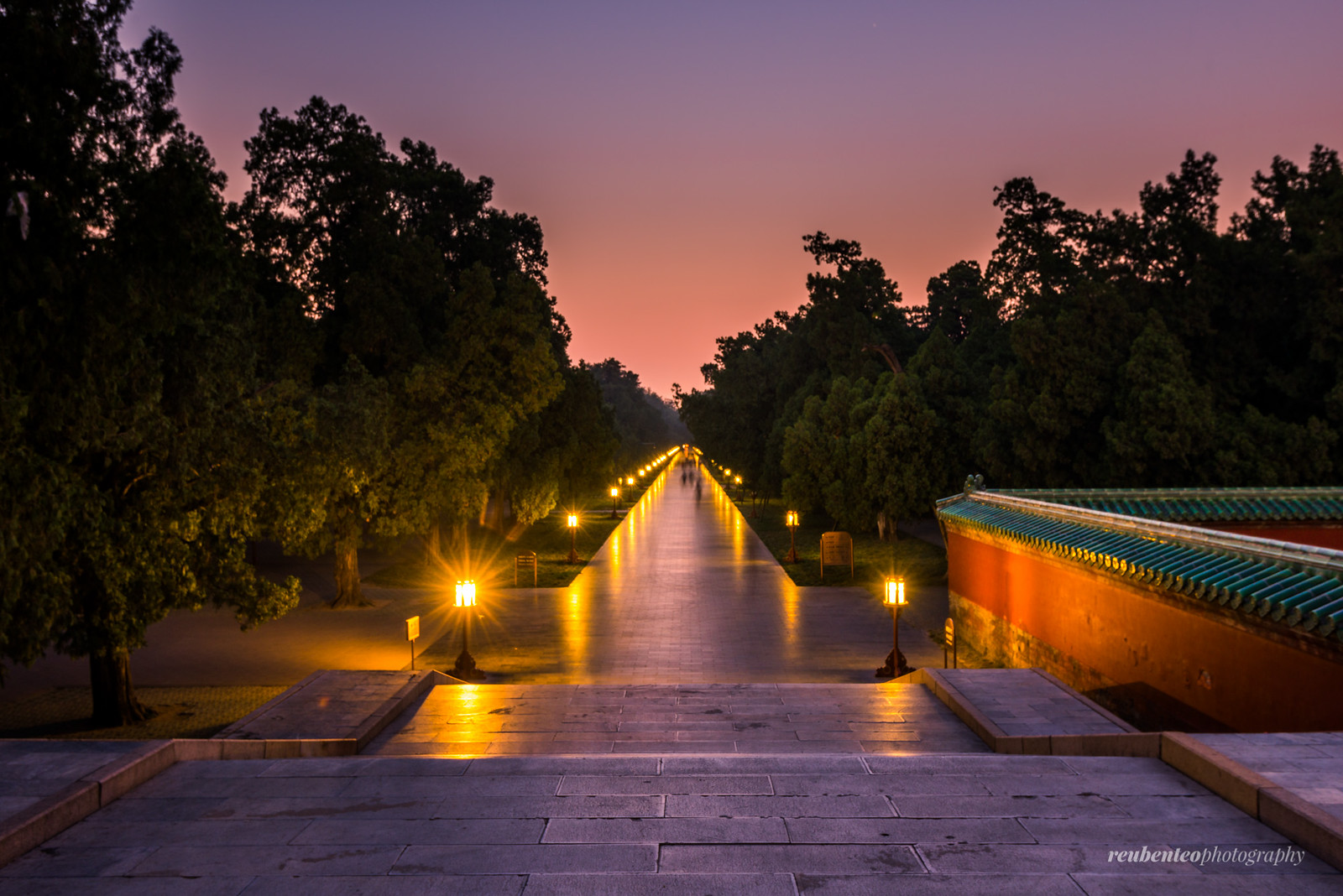 Lanterns light up walkway to the park 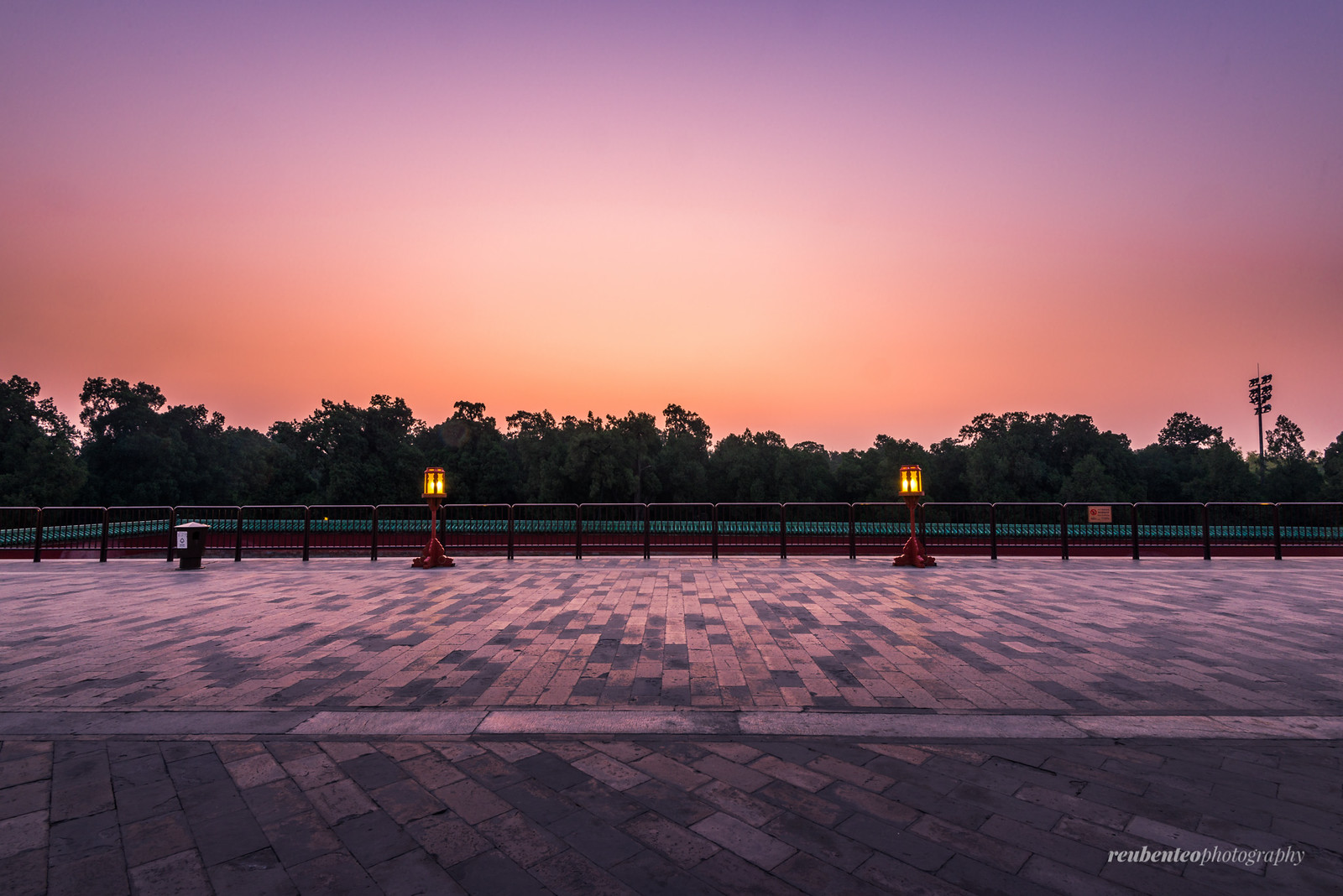 2 lanterns and a rubbish bin

Panoramic view of the walkway from the main entrance

Panoramic view of the Hall of Prayer for Good Harvests

For more photos of my Beijing trip click here