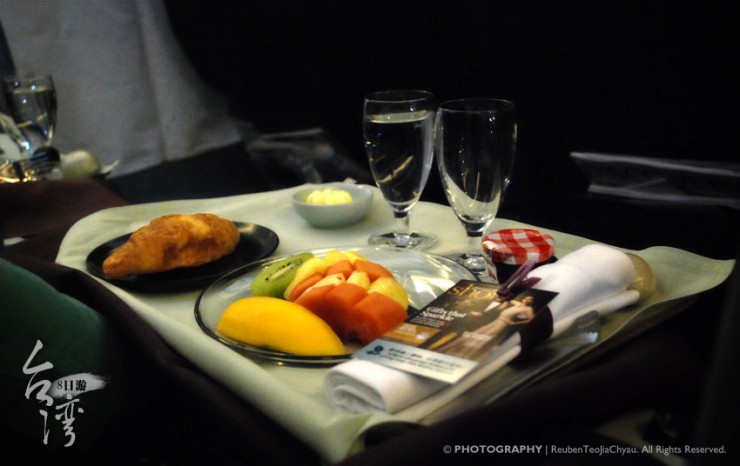 The long awaited trip of 2009 is finally here. I’ve been having dreams of myself playing and eating in Taiwan ever since we booked our tickets. It was gonna be the best Christmas ever!! It was indeed one of our luckiest days in our entire life – so far. It’s funny how this happened actually.

Well, the story goes like this: Fann and I booked our Taipei tickets seperately from Bowie and Terynn. Their flight was a couple of hours earlier, but we went to the airport together to save money on the taxi fare. As we got to the airport, we asked the counter if we could change our flight to the earlier flight similar to Bowie’s. The counter lady told us that she will put our names on the waiting list and we had to wait til the last minute to know if we could get on the same flight. So, we went for breakfast. After breakfast, we went back to the counter to wait til the lady called us. We were in luck! The lady issued the both of us our boarding pass and we could board the same flight as Bowie’s. So we ran to the gate after check in. Once we were at the gate, we followed Bowie and Terynn to the boarding door but the security stopped us and told us to use the other door. Without any thought we followed his instructions and as we entered the plane, we were inside the Business Class section. I was puzzled then I looked at my boarding pass and it wrote, BUSINESS CLASS! I almost fainted and the both of us tried our best to not act like kids on the plane. 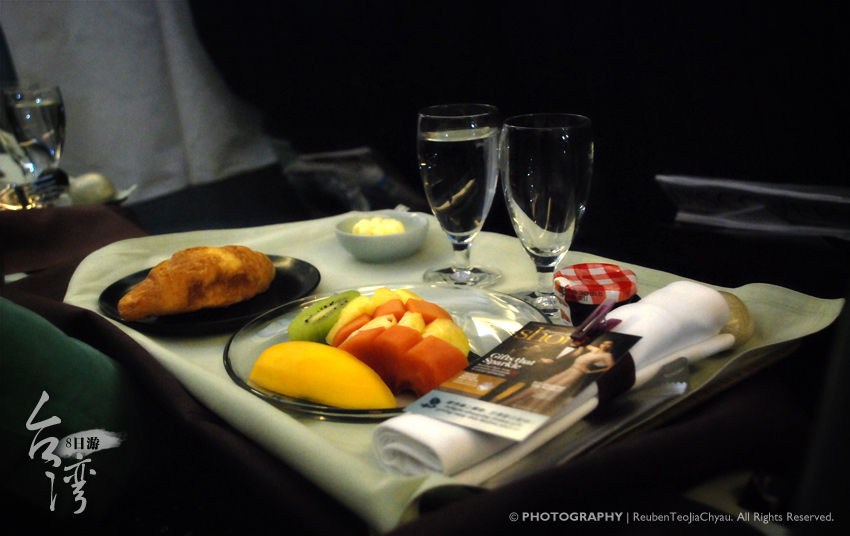 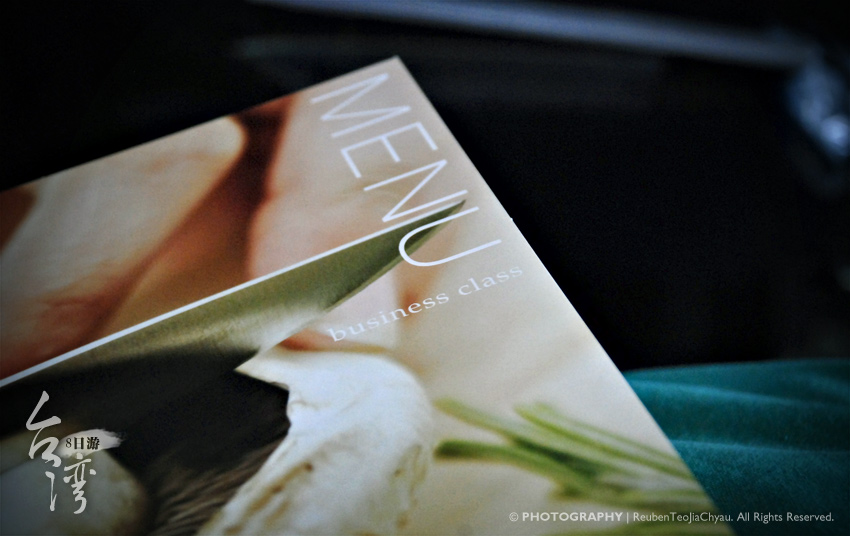 Business class was awesome! The seats were spacious, the programmes were better, the food was fantastic, everything was branded, our juices came in glasses, utensils were metal, there were free chocolates and alcohol, the female flight attendants were hotter, it was great! Never in my life have I thought that I would ever traveled in Business Class anywhere. When we reached Hong Kong, we literally couldn’t leave the seat. Our butts were stuck to the seat. It was too amazing and too comfortable. Talk about a bunch of dumbasses! Hehe.. On the 26th of December, we arrived at Hong Kong International Airport at 1p.m by Cathay Pacific. 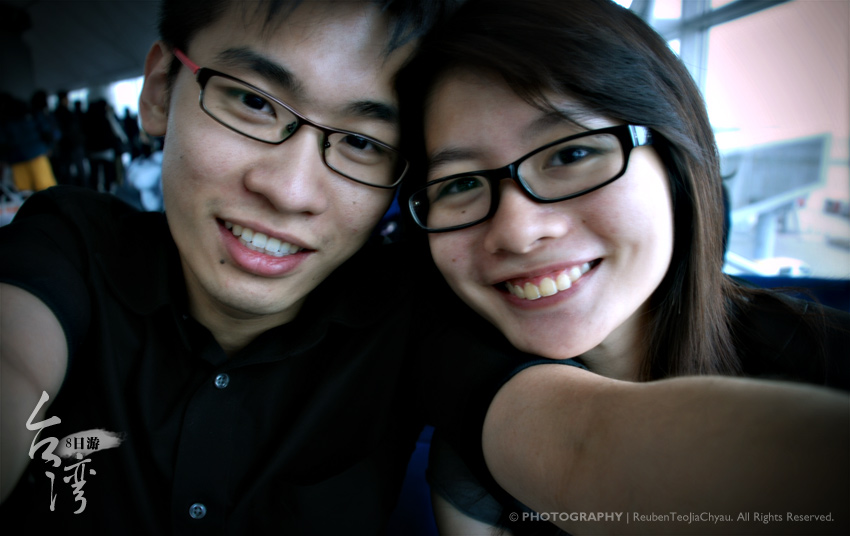 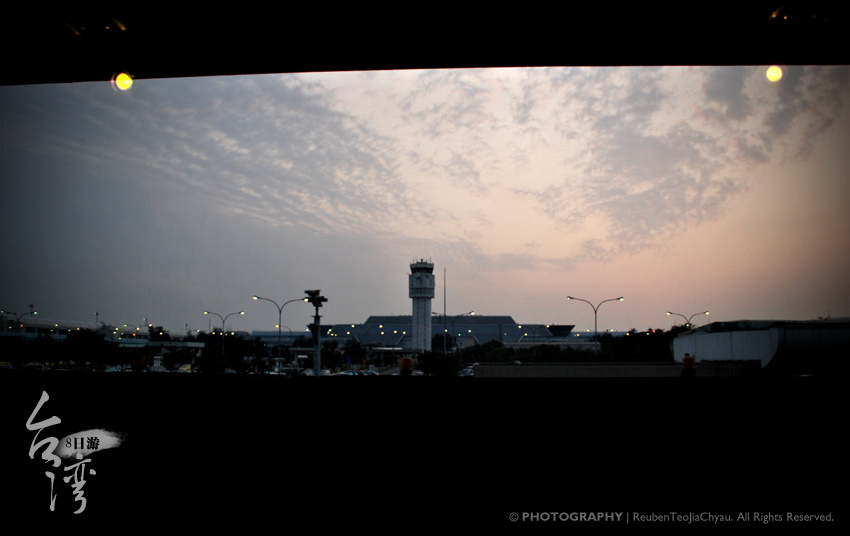 Taiwan Taoyuan International Airport wasn’t as impressive as KLIA, but it’s still Taiwan, which is far away from Malaysia. So that’s cool enough. The weather wasn’t as cold. But it looked quite dark for a 5p.m. We took our bus downtown which took about an hour or so.

Then our 2nd lucky thing happened. We were at the check in counter and the receptionist was checking and checking for quite a while. He then told us that the room we have booked for has all been occupied. I was feeling a little confused as to why the hotel could do this to us? Before I could question the receptionist, he told us that they will upgrade our room to the Studio Suite for FREE. My jaw literally dropped. I was so hapy that we quickly took our key and went up to our room. The room was indeed awesome. Upon entering, there was a living room lounge, on the television, there was my name. Beside the living was this extremely huge closet. Then there was this awesome huge King size bed. I felt really good as everything so great has happened to us in just one day. 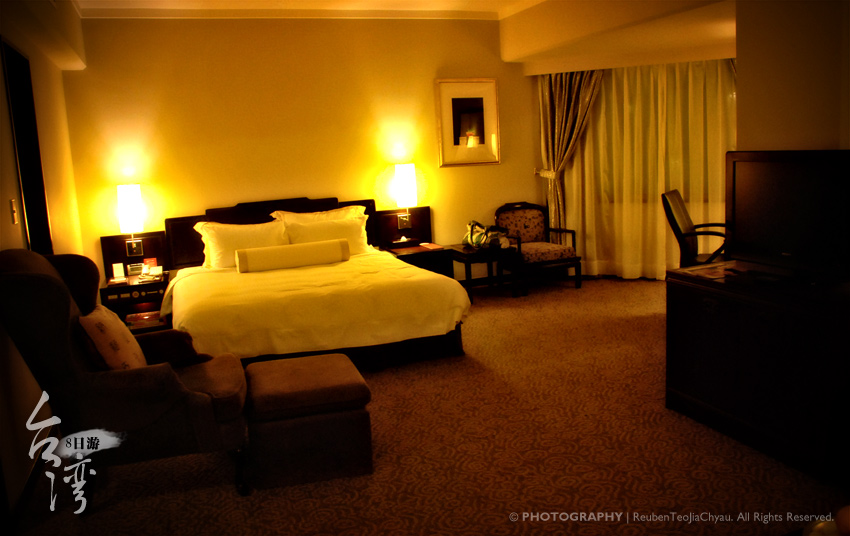 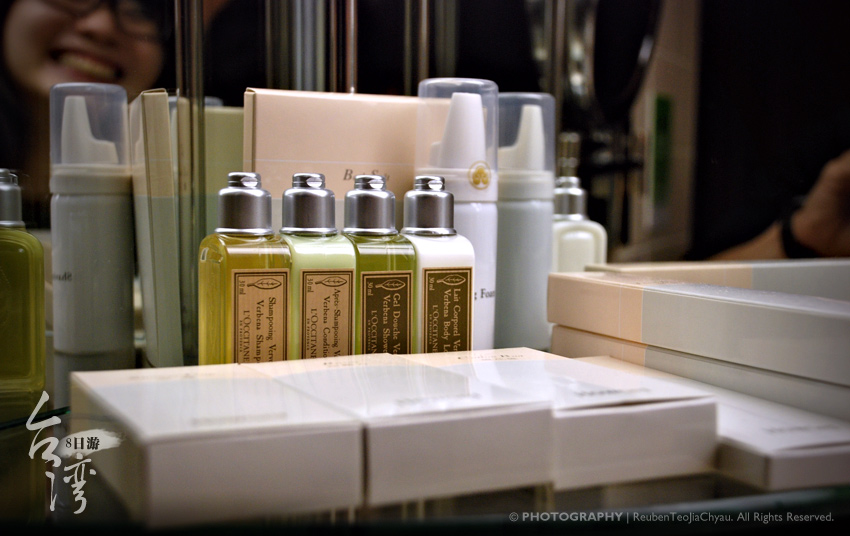 In the toilet, there were branded toiletries. All our shampoos and stuff were from L’occitane! Can you believe that? As China-man as we were, everyday we hid these toiletries into our bags in order to get the free daily refill. Wow, it was fantastic!

After unpacking our luggages and watching Fann do a quick jumping concert on the bed, we headed to the nearest subway station. We needed to go to a Taiwanese pasar malam called 師大夜市 (Shi Da Ye Shi) which is located near the National Taiwan Normal University. The night was cold and my fingers were numb. We then grabbed ourselves some 關東煮 or Oden. The hot soup made our hands warm and our tummies even warmer as we walked from the station to the pasar.

On the way, we bought 2 prepaid sim cards for our phones. We had to provide our passport numbers and details in order to purchase it and get it activated. According to the salesman, Taiwanese government needed these troublesome procedures so that people will not do crime with the numbers. The sim card cost about TWD600 and had a TWD500 credit in it. Not bad. 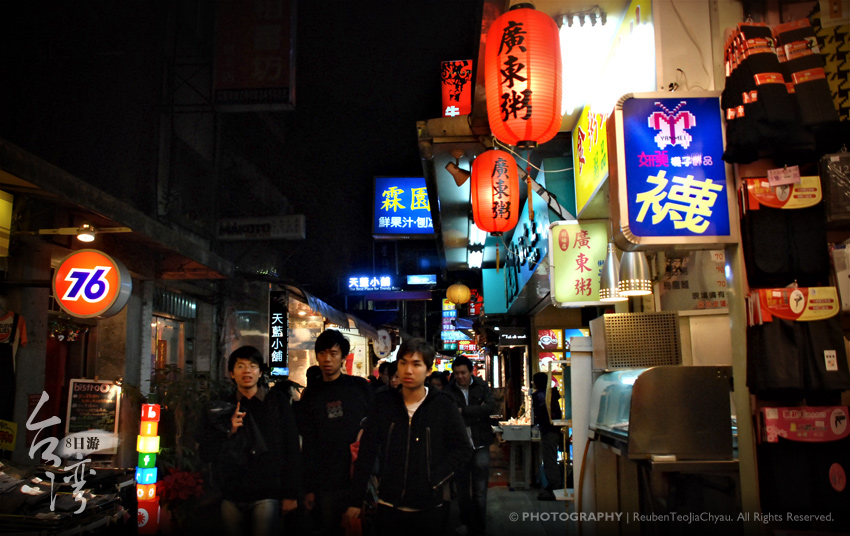 Taiwanese pasar malam felt different. Despite it being overly crowded, it just felt much better than our Malaysian pasar malam. Probably it was the cold weather or maybe everything was in Chinese? It felt weird, but I kinda like it. Well, enough is said, food was our main objective that night, or probably the whole trip. We had to grab some famous munches along the way. 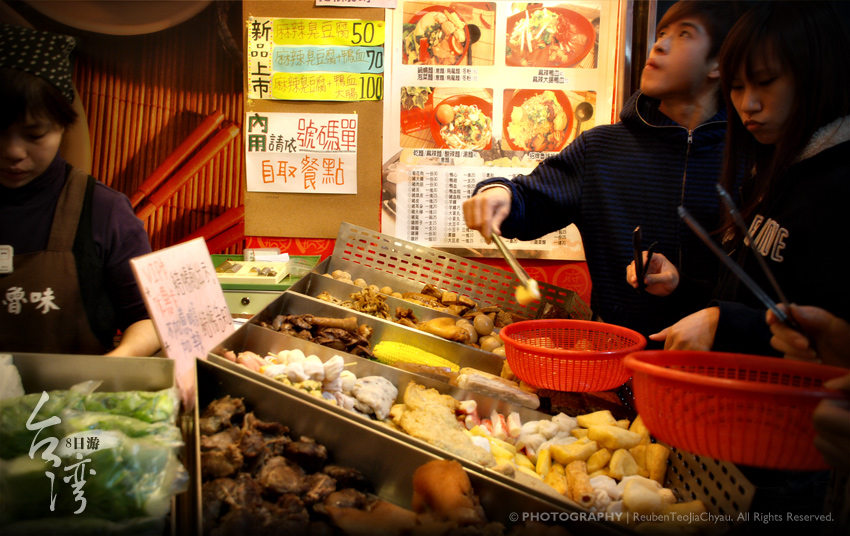 First up was a Taiwanese delicacy called 滷味 (Lu Wei). It’s actually dishes made by simmering in a seasoned soy-based sauce. The stuff you could choose ranged from vegetables to animal spare parts. 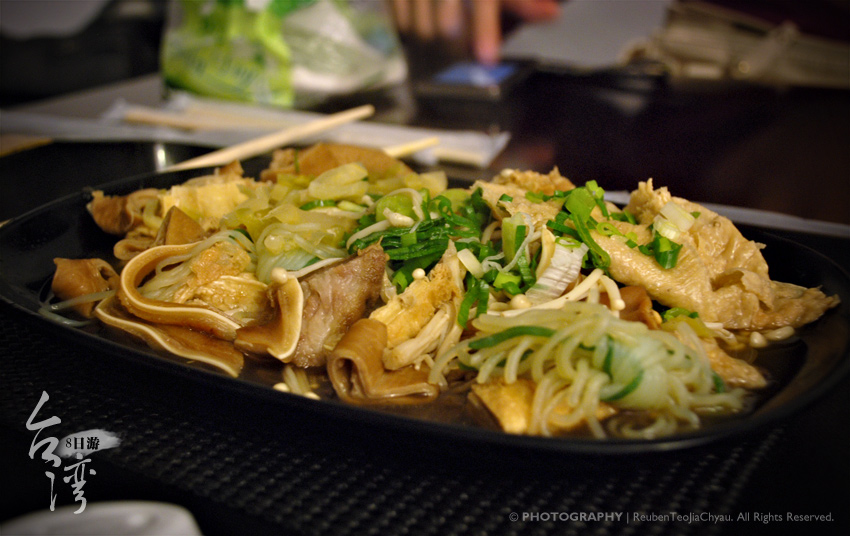 This was our dish of Lu Wei. Pork Intestines, Pork Ears, Fu Zhuk, Mushrooms, and many more. Gobble Gobble. 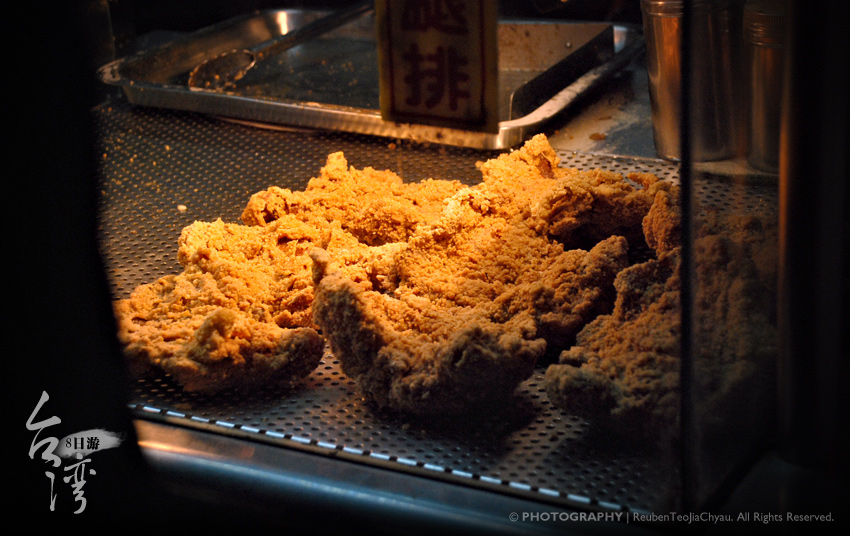 Then we went for the Giant King-sized Fried Chicken Chop. While waiting for it, we saw this: 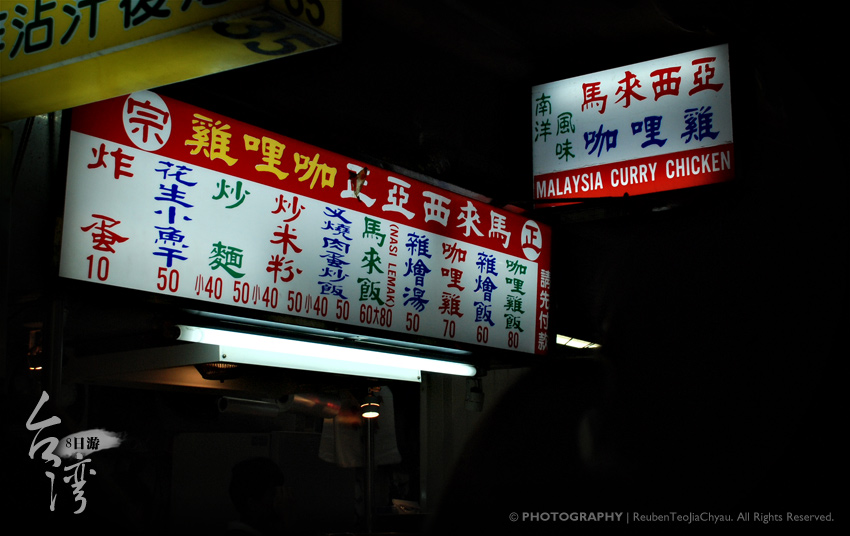 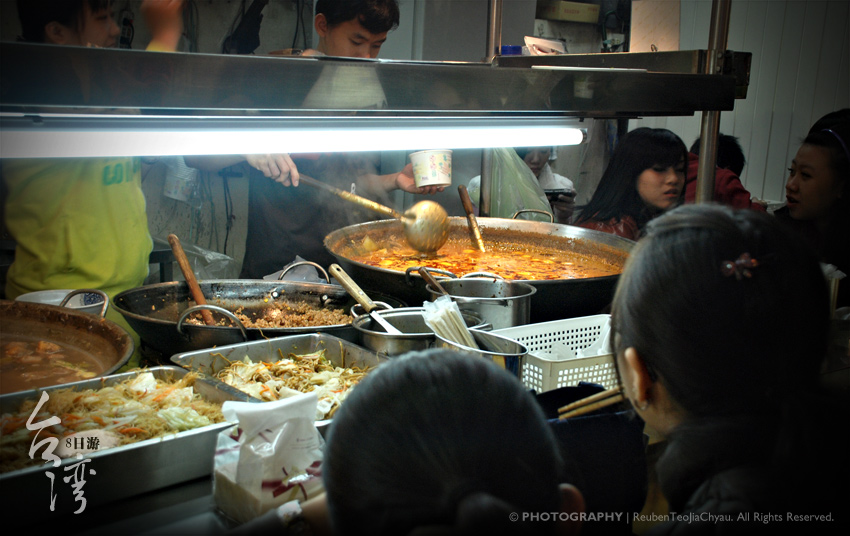 Look at the enormous wok of curry chicken. Oh My Gawd! These were only some of the food we had that night. I was too busy eating that I forgot to take each and every thing we had that night. If I remembered, we also had Salted Crispy Chicken, Pau, Tempura, Octopus Balls, and many many more. *burrrrp! 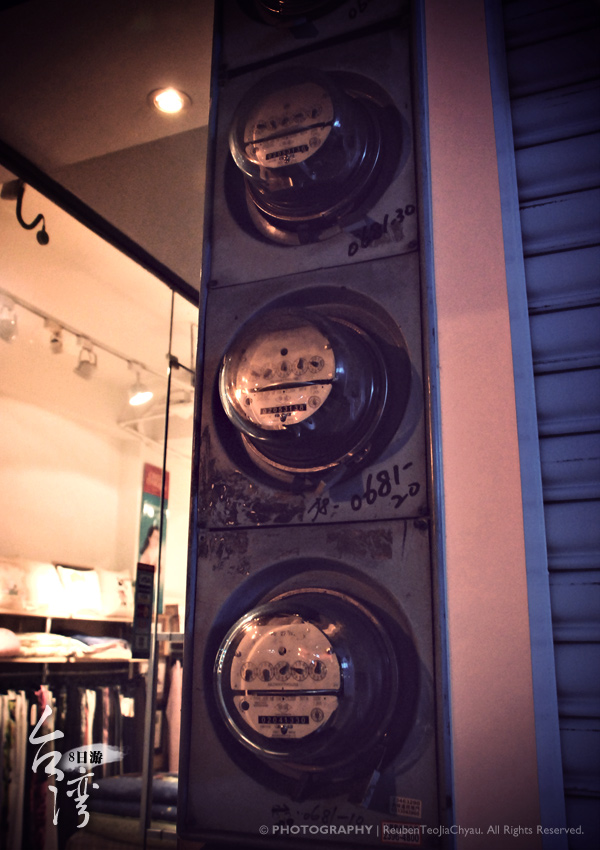 I also noticed that Taiwan uses really old looking electric meters. Looked really unique in this advanced country. Well, we ended our first day with a happy and smiling tummy. Back to the hotel to recharge our batteries for our next day.