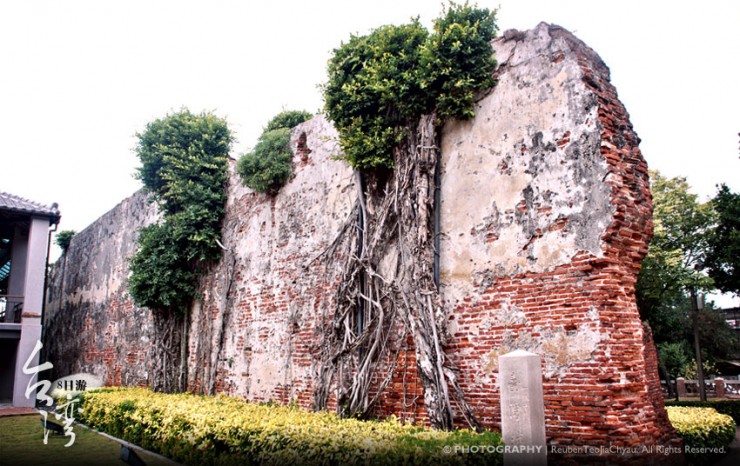 Tainan was a really quiet place. We woke up a little late that day, but still the weather was cold. Our plan was to quickly tour around the important and must-go places then leave for Taipei again. So, we took the best transport ever – walking.

On our way, we came across a few interesting things. The traffic lights had dozens of surveillance cameras just like birds standing on the electrical wires. I had no idea if Tainan was safe or dangerous. It was a unique sight.

Outside the school, there were these nicely decorated porcelain tiles that had words on it. After browsing through some of them, we noticed that they are some messages left behind by graduated students for the school.

There were temples everywhere. Big ones, small ones, all decorated with amazing sculptures and very detailed bas reliefs. Every temple we passed by, we gave it a little visit with a prayer.

Walking to our first destination was the Anping Fort. Anping is actually the ancient name for Tainan. This fortress is called Fort Zeelandia (now Anping Fort), which was built over ten years from 1624–1634 by the Dutch. The Dutch had ruled this part of the city for about 38 years during that time. Today, it’s one of the icons and hottest tourist spot in modern day Tainan.

There was also a statue of General Zheng Cheng-gong, a general of the Ming Dynasty who drove away the Dutch with 400 warships and 25,000 men. Impressive enough, his statue was built there, who we mistakenly took for Admiral Zheng He, also from the Ming Dynasty. After walking around the fortress, we got to collect our visitor’s card which we could collect at every famous destinations of Tainan.

Next, we passed by this wall. Interestingly, the Dutch built the wall with red bricks mixed with sticky rice, syrup and oyster shell ash. So, don’t eat too much bak zhang. Look at how hard the wall is to digest in your stomach? Also, if not mistaken, I twittered here. At this very spot. Yes there was wifi among these walls. Interesting~ Moving on, we walked to the Anping Tree House.

The Anping Tree House is a late 19th century salt warehouse that has been completely overgrown by mangrove trees. Coiling branches weave through the old brick walls and where once was a roof is now a canopy of green leaves weaving a tapestry of light and shadows. There was a chilly feeling inside the house, so we left rather quickly. But I admire how the branches coil around the house.

After sightseeing, we rushed our asses to the station once more and now we had to go back to Taipei. There, we catched a taxi to go up to Jiu Fen, one of the coldest places I’ve been in Taiwan. The ride up to Jiu Fen was rather long and bumpy. We were going up hill and the roads were really narrow and steep. According to other sources, it was rather dangerous to go uphill, so don’t drive too fast.

After an hour’s ride, we reached this remarkably beautiful place called Jiu Fen (九份). It is a mountain town located in Taipei. It was so beautiful that I can’t take my eyes of every single detail, until this awful smell kept following me as we were looking for our motel. It was the smell of stinky toufu. A local delicacy enjoyed by most of the Taiwanese, you could almost smell this stinkiness all the way in that narrow path throughout Jiu Fen. To me, it smelt like rotten fish or bad eggs. Poo~ it was terrible, the smell I meant.

Stinky Tou Fu in the making

After we checked into the motel, it was already quite dark at 6pm. The weather was getting really cold. So, we after covering ourselves up with loads of coats and clothes, we headed down to hunt for dinner. All the shops were already preparing to close down. Why? well, it’s because the next day was New Year. All the people were getting ready to celebrate and welcome the coming 2010.

After dinner, most of the shops were closed. We got to buy some mochi on our way back. It looked so delicious I had to grab some home. Later, we were forced back into our motel. So, what do we do? We take my tripod and put it to great use, to take idiotic pictures of ourselves.

After dinner, most of the shops were closed. Therefore, we were forced back into our motel. So, what do we do? We take my tripod and put it to great use, to take idiotic pictures of ourselves. After fooling around, we went back for tv as we waited for the New Year to come. Fann seems to be falling asleep… hehe…